The sky was angry that day, 6/6/10, my friends, for ForgottenTour 40, the third tour under the auspices of the Newtown Historical Society, and there were even doubts that the tour would take place that day or finish, if it did start. We did get the tour started, though, and finished it with a minimum of tempestuousness. Though the threatening weather did knock down the expected crowd, about 30 ForgottenFans turned out to watch as several of Woodside’s little-known secrets were brought to light with the aid of NHS President and FNY correspondent Christina Wilkinson. The NHS’ Mitch Waxman of the Newtown Pentacle designed the tour booklets, and ForgottenFan Pat Sweeney showed us the interior of St. Sebastian’s Church. The throng checked in on the mezzanine of the historic Woodside elevated train/Long Island Rail Road station at Roosevelt Avenue and 61st Street…

Woodside is, perhaps, best known by NYC commuters as a major interchange of the Long Island Rail Road — the only other station in addition to Pennsylvania Station where all major points in Long Island can be directly accessed (except of course for Flatbush Avenue in Brooklyn). It was first settled by Europeans in the 1640s, but remained largely rural in nature until 1869, when developer Benjamin Hitchcock purchased the estate of John A. Kelly, divided it into lots, laid out streets, and brought in other developers and industry. Kelly, for his part, had already given Woodside its name from a series of letters written from his room, which had a view of the woods out the window. The LIRR arrived in 1895, trolleys plied the main routes, and Woodside, which has somewhat nebulous boundaries (Woodside Avenue on the west, Northern Boulevard on the north, Mount Zion Cemetery and 51st Avenue on the south and the New York Connecting Railroad on the east, was folded into Queens’ overall numerical street nomenclature in the 1920s. 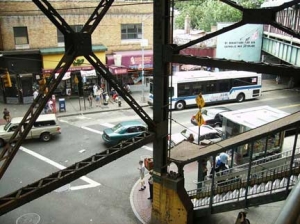 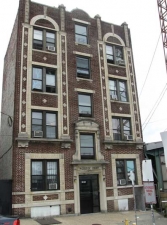 The years 1915-1917 saw changes that shaped the area surrounding Roosevelt Avenue and 61st Street into the pattern seen today. Until the mid-19 teens, this area was sleepy and suburban, if not outright rural, with an at grade railroad and a shedlike railroad station. The LIRR main line was rerouted, with express tracks added, and lifted on an elevated trestle above traffic. In 1917, the Flushing Line, operated by both the BMT and IRT, arrived, and built its line high above the LIRR tracks. Roosevelt Avenue was built underneath the el line. In 1916, Woodside’s first apartment building, Woodside Court, was constructed alongside the eastbound platform. The station underwent a complete renovation in 1998. 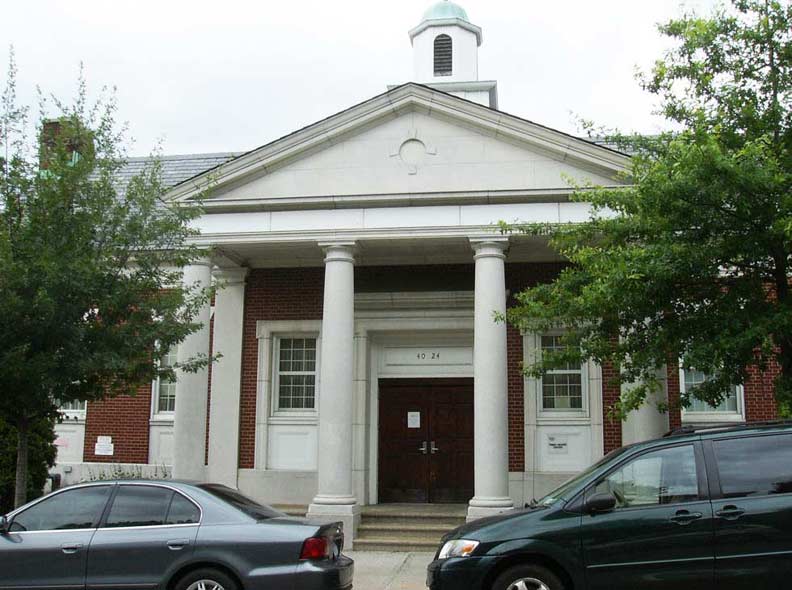 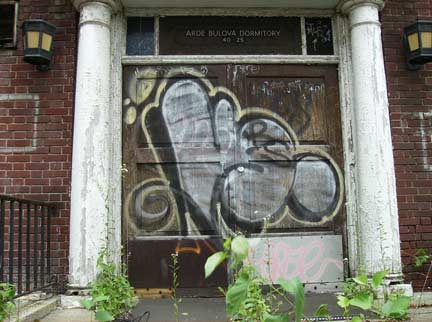 Toward the end of WWII, Arde Bulova, of Bulova Watch Company, founded a watchmaking school for disabled veterans in Woodside. The Joseph Bulova School (above), named after Arde’s father and founder of the company, opened in 1944 on 62nd Street south of Woodside Avenue.

The Church of Latter Day Saints has occupied the property since 1997. The two 62nd Street buildings (the other was the school’s gymnasium) are in immaculate condition, but the dorm on 61st Street currently stands behind a chain-link fence, with its door covered in graffiti. 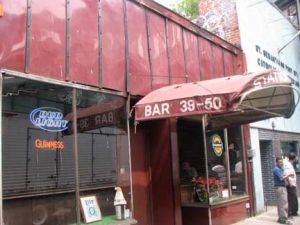 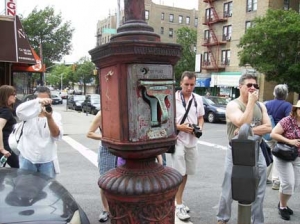 Station Bar, 61st Street north of Roosevelt Avenue, which looks unchanged since the Johnson administration; pull-handle fire alarm, 61st Street and Woodside Avenue. The city is preparing to do away with its streetside fire alarms, the oldest of which first appeared in 1913, citing the rise of cell phones in reporting emergencies, as well as statistics that show that at least 90% of all false fire alarms are caused by pranksters pulling the levers. (FNY will do a report on the alarms, as well as their various indicators over the years.) 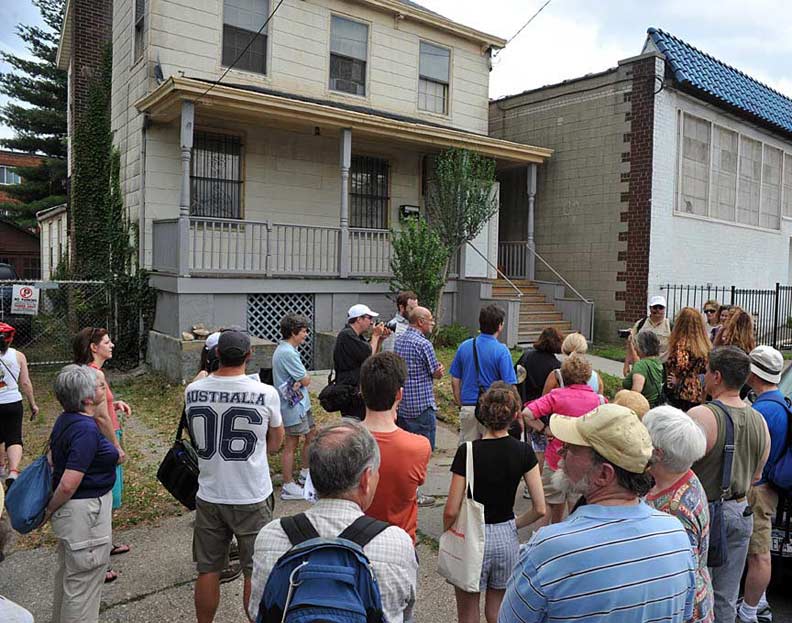 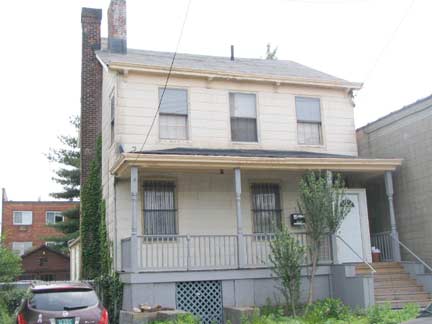 Former Shaw’s Hotel, 64th Street north of Woodside Avenue. One of three very old houses purchased by innkeeper Benjamin Shaw to define the limits of the land he purchased from the Palmer farm in 1842, 50 acres for a total of $5,530. Shaw had held the first election in Astoria in his home there in 1839. information: Joanne Garahan 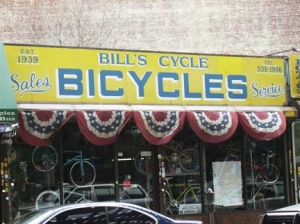 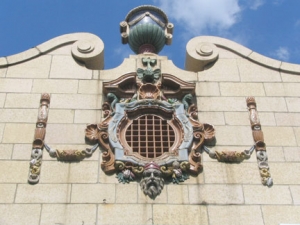 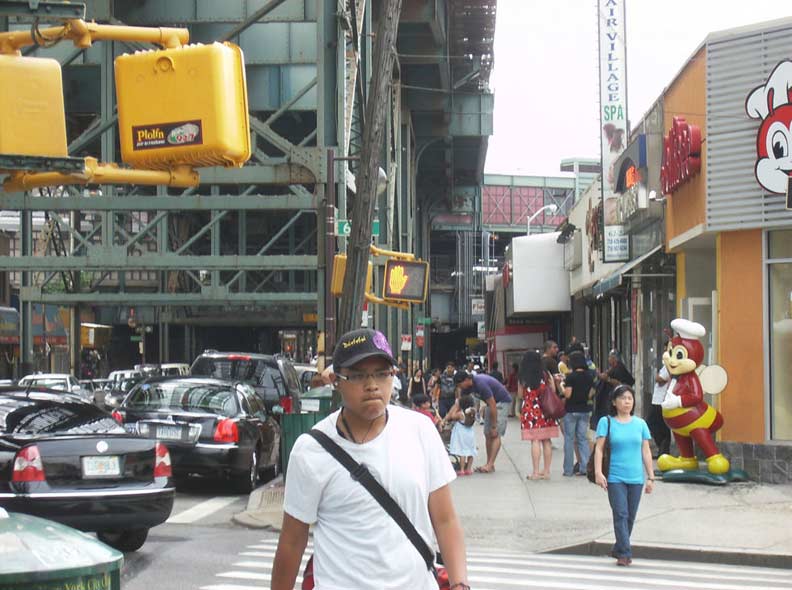 Roosevelt Avenue scene, under the combined trestles for the Flushing El and Long Island Rail Road. The #7 train has been called the International Express, as it passes through territory occupied by dozens of immigrant nationalities. On the right is Jollibee, a Filipino fast food franchise founded in 1975, with total sales exceeding $1 billion in nearly 2000 worldwide locations. 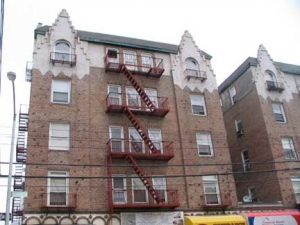 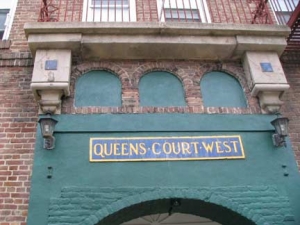 Woodside is full of apartment buildings, mostly built in the 1920s and 1930s after the LIRR’s route was altered and elevated. Queens Court West, at 39th Avenue and 63rd Street, is especially notable for its wondrous hand lettered door sign — every letter is formed by two meticulously arranged terra cotta plates. Repaintings are no doubt done every few years. 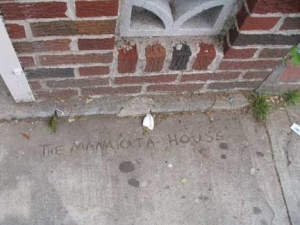 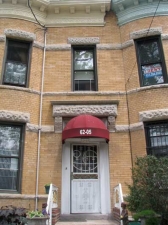 Manakata House, 62-05 39th Avenue, so named for its sidewalk inscription, one of an attached series of light brown brick buildings with bowed fronts and roughened window lintels. The Manakatas are long gone — the present inhabitants’ names are on a wrought iron gate! 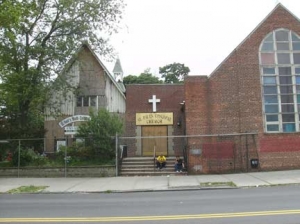 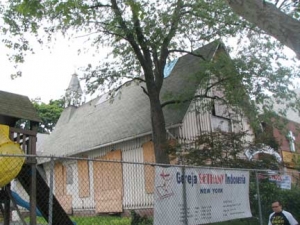 St. Paul’s Episcopal Church, 39th Avenue and 61st Street. The first church founded in the village of Woodside in 1873, built as a Carpenter Gothic building with Gothic stained glass windows, overhanging eaves, vertical siding and multicolored roof tiles. The first rector was Rev. Samuel Cox. This church also served as the community’s first library beginning in 1879, with 300 volumes. The church suffered severe fire damage in late December of 2007, and is still seeking funds for repair. 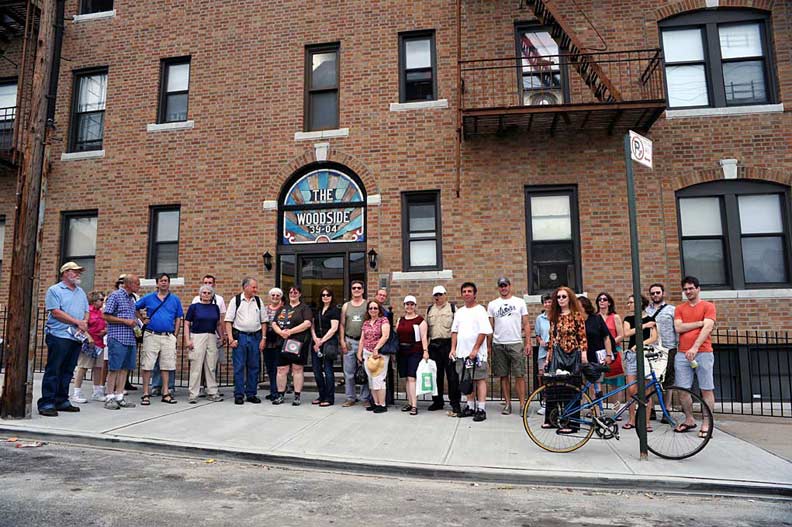 The Woodside, and its gorgeous stained glass sign over the entrance at 39-04 60th Street, was the setting for the ForgottenTour 40 team picture. I’m not sure if Count Basie was inspired by Woodside, Queens for his Jumpin’ At The Woodside….

… but I know it was Gene Gene The Dancing Machine’s favorite song.