The Who, the Beatles, Jimi Hendrix, Elvis Costello, Don Budge, Rod Laver, Billie Jean King and Jimmy Connors have all held court at Forest Hills Tennis Stadium at 69th Avenue and Burns Street, Queens. The U.S Open was held here for many decades before it decamped to Louis Armstrong Stadium in 1978 and later to Arthur Ashe Stadium in Flushing Meadows/Corona Park in 1997.

The West Side Tennis Club was organized in 1892 and moved here in 1913 (the same year Ebbets Field in Brooklyn opened), with the U.S. Open moving in in 1923, when the stadium was constructed. 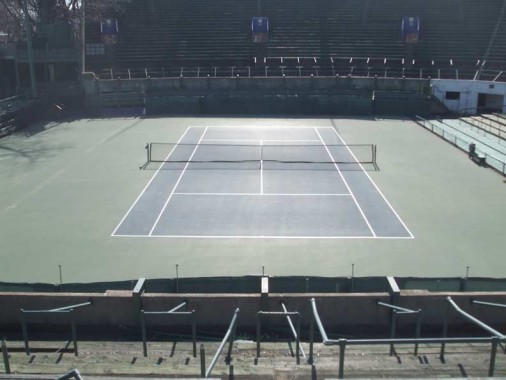 The Har-Tru surface replaced grass in 1975, the same year that night play was instituted. Among the firsts instituted at Forest Hills: seedings in 1927; first black player in a Grand Slam event in 1950 (Althea Gibson); tiebreakers in 1970; equal prize money for men and women in 1973.

Here, Jimmy Connors plays Australian Ken Rosewall in the US Open Finals at Forest Hills in 1974 (Connors won, capturing a third of four Grand Slam tournaments that year, and he was 3 for 3 in the ones he played in). Connors’ reaching the 1991 US Open semifinals at age 39 was rightfully applauded, but here Rosewall reached the finals at the same age. 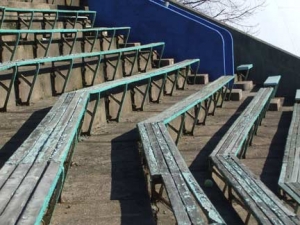 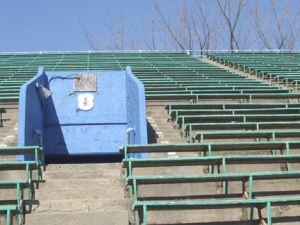 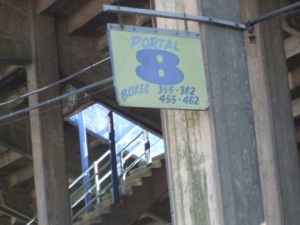 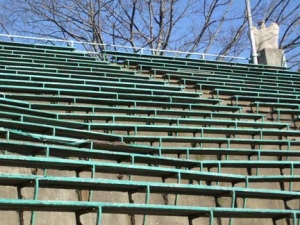 Looking at Forest Hills Stadium today it’s hard to fathom it once being host to a Grand Slam pro tennis event, as well as rock and pop concerts. It seems more or less unchanged and unrefurbished since 1977, when the last Open was played here, and the late 1990s, when the last major concert took place here (Echo and the Bunnymen). 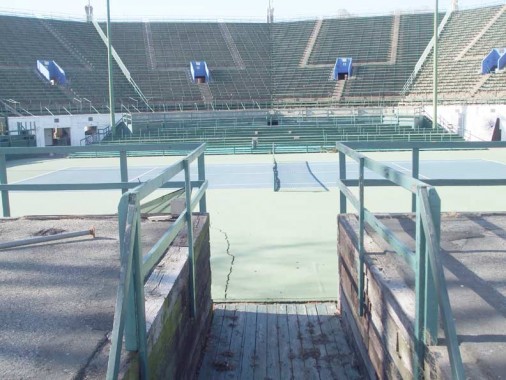 According to the Wall Street Journal, the West Side Tennis Club is considering selling the stadium to a developer, who could demolish it and build luxury housing on the site. Forest Hills’ Michael Perlman, who has been at the forefront of many other preservation battles, urges a campaign to preserve the stadium and revitalize it as a concert venue and community center.

Based on the above significance and your own sentiments, please write a letter supporting landmark status to the NYC Landmarks Preservation Commission. The Forest Hills Tennis Stadium, Clubhouse, interiors, and grounds should be calendared for a public hearing ASAP. If restored and adaptively reused for smaller concerts and smaller tennis matches, it would enhance the appeal of the neighborhood, and preserve a historic icon. Jet Blue can be a sponsor. Breathable space is prime, and we do not need typical condos in a neighborhood accustomed to overdevelopment. City Landmarking will preserve the historic Forest Hills Tennis Stadium, Clubhouse, grounds, & interiors for future generations to cherish, increase the chances of funding for repairs, and ultimately enhance our quality of life. Rego-Forest Preservation Council

so what ever happened to the stadium?

Still there, future still up in the air

its going to be a concert stadium according to the NY TIMES http://www.nytimes.com/2013/06/24/nyregion/storied-queens-stadium-is-poised-for-a-comeback.html

Saw the Talking Heads there during the StopMaking Sense tour.

Great place for concerts. Miss it so. Saw Genesis twice here. The first two shows of seeing them four shows in five days. Perter Gabriel, Asia, and Yes as well. Walked by it recently. It looks so different now. I was thinking it probably shut down due to noise from concerts. Sad.

Which forest hills? I passed so many signs that read forest hills. I do know forest hills was never in the United States. I know tennis matches were never at the worlds fair site. We’re there two sites? What is a forest park? They said you can never go home again. Yankee stadium torn down. Shea stadium torn down. I wonder why? They told me. No money was available. Ever go back to look? Don’t it is not the same places. Ever have to drive somewhere and have to pass an old hunt? You knew it was on the left side. When you pass by, it was on the right side. You knew never heard of a bodega. You pass a school your patents were made to build that was promised from one generation to the next. You knew the school had tennis courts. You pass by to see basketball courts. You must do it go in. You ne’er heard of housing projects or public housing or NYCHA. People come from where complaining they never had an opportunity. You count hundreds of schools. No ones we lived here and paid our way. Why? The newspapers, news reports are ever about here. Whose
President sent who to viet nam, Korea, Afghanistan, viet nam, Cuba, Laos, Cambodia? Where did Colin Powell come from? Where did pet rashes come from? Even the first president bush said his son, the second president bush was stupid.when was he ever in whose army? I knew no homosexuals growing up. I have an idea what happened. I was always female. Feminity? Men might fear working women. We have to support ourselves. Dad cannot support me forever and ever. Marry me to who? I gave up the dresses and the pumps and the gloves and the hats. The heels break. The dresses get caught on desk and tear, stockings run, feet swell if you have to stand for long periods of times in pumps. Concern about pregnant women revealing how pregnant they are. Are they inde contract to do this? I was told where lose fitting clothing and comfortable shoes as well as watch what you eat and drink. MIT has to be a reason why men disappear. Women have shown me, the car is still here, the golf clubs ate still here, his clothes is still here. The band of gold gets hock. Might as well hock them because someone will come to say it was never yours, you could not afford it, the neighborhood becomes a hood. You will be eventually robbed by predators. They will say that’s life. Police respond when? Friends say, they got me too. Who really cares?

what the hell you talkin bout forest hills is in queens and is a top notch community not a hood forest park is a euro designed community in forest hills. The us open is now held in a old converted from the worlds fair.

Does anyone know what happened to the Club near the old Stadium called Sebastians?

Please don’t demolish this tennis club. I spent many days/nights there in the 1970s watching all the great tennis players, Chrissie Evert, Jimmy Connors, Billie Jean King, Arthur Ashe and on and on. My good friend Mike Burns was very instrumental in making those tournaments so fabulous. I plead with whomever is in charge of this decision now, whether it be Robert Tierney or Mary Beth Potts…someone PLEASE take charge and have this site preserved by issuing landmark status. Just seeing the broken wood slats on the bleachers makes me cry. This was a very special place and could be again.

I saw The Rolling Stones at Forest Hills Stadium in the Summer of 1966 – great show!

I saw The Monkees there, on July 15, 1967. The Jimi Hendrix Experience was one of the opening acts.

I have a picture of Bob Dylan with The Hawks playing there…
The stage seems incredibly high in it and I haven’t been able to find another picture from the same angle…maybe you can help?