Time to delve once more into the Bob Mulero collection of lampposts. Bob and I achieved our separate lamppost obsessions separately: while both us have been enthusiastically noting the state of NYC’s lamppost collection since childhood, Bob got the jump on me and began photographing them in the mid-1970s, a time when I was attending college (er, ah, pretty much napping in the school’s newspaper office) and never thought about going around with a camera to record them. We can be thankful that Bob, did, though, and he has in his possession one of NYC’s greatest collections of NYC lamppost arcana to be found anywhere. He’s like the Isaac Newton Phelps Stokes of lampposts. During the summer [2010] Bob and I were proud to mount some of his archives in an exhibit at the City Reliquary in Brooklyn; we were less successful getting it into theMuseum of the City of New York, though there are other venues, and we’ll keep trying. It’s a valuable collection and, at least as far as I’m concerned, it’s indispensable work.

Lampposts installed to light parkways and expressways have always been kept distinct, design-wise, from those used on regular streets. Beginning in the 1950s, the Department of Traffic (now Transportation) began to use lamps that mimicked their side-street counterparts, but with cylindrical, not octagonal, shafts. This practice also extended to the service roads on either side of the expressway, such as here on 7th Avenue and 67th Street in Bay ridge, where a vintage 1964 cyn-shaft still sported a General Electric M400 luminaire as late as the 1990s.

These two shafts bear almost exactly the same design, though several decades span between their separate installations. The post at left is outside the Audubon Ballroom on Broadway between West 165th and 166th Streets as a vaudeville and later, movie theatre on the ground floor with the ballroom on the second floor; it presently is home to a memorial to civil rights leader Malcolm X, where he was assassinated in February 1965. Meanwhile, 1912 looks about right for the ornate mast now bearing a late 1960s-era Westinghouse Silverliner luminaire on a pedestrian stairway on East 51st Street leading to a walkway along the East River.

Left: Type 1BC (Bishop Crook) at 88 West 10th Street, between 3rd and 4th Avenues, or rather the top of the shaft. I have no idea how this post got here, or whether it lights up at night. Note the ladder rest that was insluded on the earliest bishop crook streetlights.

2nd from left: Market and Henry Streets, early 1980s. At the time, the post still sported a Westy Silverliner, and yellow and black Manhattan street signs were still around. The wall ad for Fletcher’s Castoria made it to about the year 2000.

3rd and 4th from left: The very first pair of Donald Deskey-designed lampposts were installed on Broadway and Murray Street, opposite City Hall Park, in 1958. This also marked the debut of the GE M-400 luminaire, which originally glowed in greenish-white. The post would not find widespread use until about 1963 or so, but the GE’s along with their chief competitor, the Westy Silverliner, would jockey for supermacy on the streets of NYC for several years. The bus seen on the photo right was a General Motors “old-look” bus produced from 1940-1959 (as opposed to the GM “new look” fishbowls introduced in 1960). The post shown on the right, with its somewhat flatter-curved cobra neck, survived in place into the 2000s, when it was replaced with the ornate Twins that are there now.

Also: The Deskeys of 5th Avenue

So many changes have happened with this view of East 34th Street, looking west from the NW corner of Lexington Avenue. Of course, the Type 24A-W lamppost on the corner has disappeared, along with the navy blue and white humpback street signs (with the hump showing the cross street); the second-generation black-and-white arrow shaped One Way sign (the present design is in photo right); pedestrian WALK crossing signs were removed in the early 2000s, replaced with the Hand and the Walking Man. The building with the Rexall drugstore has given way to a high rise apartment building, and the 71st Regiment Armory, Park and East 34th, was replaced by the oddly angled #3 Park Avenue. The 71st’s 250-foot tower was modeled aftre the Palazzo Pubblico in Siena, Italy. 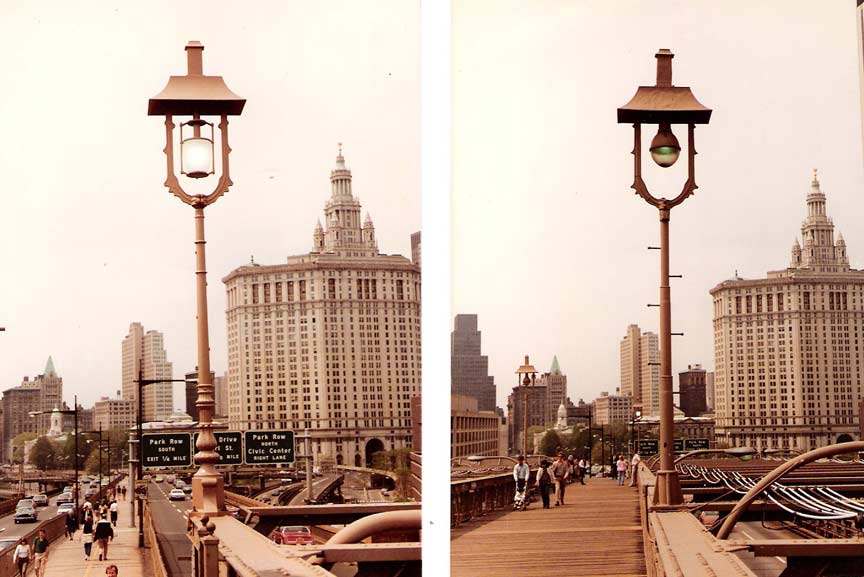 I suppose you thought, as I had, that the walkway lamps on the Brooklyn Bridge were the original McCoys from 1883, when the bridge opened. I was incorrect — the present ones are replacement posts from the 1980s (photo right), and the DOT updated the originals with rather more ornamentation that the oldies had (photo left), as this side by side dyptich indicates. The biggest difference is in the base, which had a lot of Beaux Arts frippery — contrast to the low key originals. The new lamps burn bright white, while the old posts, which were fitted with gumball lamps in the 1940s, burned a dimmer greenish white till they were removed. The Municipal Building dominates the scene in both the 1980s and today. The Type T41 Whitestone posts (see photo left) were removed from the bridge in a 1990s renovation.

A very hard-to-find pairing of a modern octagonal shaft pole and a 1910s-era fire alarm light mast can be found on a couple of poles in eastern Canarsie. As a rule, fire alarm lights are mounted on octagonal poles either at the apex of the shaft or on a curved pipe mounted mid-shaft. These poles, though, break the rules by using masts that were formerly used on the ornate Beaux Arts posts of the 1910s like long-armed Corvingtons or Bishop Crooks. How they got on these posts is a mystery.

Another such a pairing can be found on a post on 13th Avenue and 60th Street (as seen on this page) and a flock of them used to be on the boardwalk in Coney Island, but they were removed to give way for Coney’s new set of retro-Twinlamps.

I’ve often cautioned ForgottenFans to watch out under those elevated train or expressway underpasses, since strange creatures can lurk beneath — such as this dwarf post with fire alarm light at Jamaica and Autumn Avenues in Cypress Hills.

Right: Hunts Lane, Brooklyn Heights. According to the Welsbach Handbook of New York City Street and Park Lighting Equipment, of which I happen to have a copy lying around, this is a Type SL200 luminaire. These type fixtures, without glass diffuser bowls, were often found on side streets. A few are still aroun here and there but his was replaced by a modern sodium light about 10 years ago.

Bob has an entire sequence of photos taken from the construction of Battery Park City in the early to mid-1980s. From the first, the site’s developers decided to go with retro-Bishop Crooks and longarm neo-Corvingtons to light the streets. These three were taken at South End Avenue and Albany Street in the early, mid and late 1980s. In the first photo the south tower of the World Trade Center is seen on the right; South End Avenue is filled with buildings in the World Financial Center in subsequent pictures. Note the curved pipe masts for the fire alarm lights; in previous castiron post generations, the masts seen above in the Canarsie photos would have been used.

First two on the left: I haven’t taken a walk on the ped path along the FDR Drive on the East River lately, and so am unsure about whether these walkway species are still in place. Pedestrian walkways and bridges used lamps from all over the NY lamppost spectrum. For a time, davit posts like the one on the left were all the rage, and then mini-T41 posts, like the one on the right, were liberally employed.

3rd and 4th from left: These two post designs were first employed in the 1930s. The two posts on the left survived until about ten years ago on a ramp from the Triborough (Robert F. Kennedy) Bridge to Ward’s Island. Though Triboro posts can still be found in Twin form on the Queens side of the bridge and also on 2nd Avenue and East 125th Street approaches. most of them haven’t made it past the turn of the 21st Century.

The posts on the right are known in the handbook as T41 Twins and first saw employment on the Bronx-Whitestone Bridge, where they can’t be found these days. The T-shaped, finned posts still turn up on the Brooklyn approaches to the Brooklyn Bridge and very occasionally on other parkways and expressways, though their presence today is more a matter of accidental survival than anything else.

LEFT: In 2005 I made an extraordinary discovery on the campus of SUNY Maritime College at Fort Schuyler in Throg(g)s Neck: the presence of two Type G posts I hadn’t known about, as well as a rare Twin Type F (both genres are described on my Lampposts By the Letter page. Unfortunately Bob tells me they have all vanished by now. In the Bronx, many old-style posts got a silver coat of paint, unlike the chocolate brown seen elsewhere.

2nd from left: walkway light with radial-wave luminaire, University Heights Bridge, 1980s. At one time many NYC bridges sported unique lamps designed to illuminate walkways, but most of these anomalies have long been expunged.

3rd, 4th, 5th from left: Type 24A-W posts and their variants on Centre and Broome Streets; Reade Street between Elk and Centre; and Walker, west of Broadway. Type 24 A-Ws were crooks on steroids, featuring elongated shafts with reduced ornamentation and simplified scrollwork in the crook.

In the 2nd row, take in the photo at left for a minute — for me it’s hard to imagine such a rundown scene could be possible in downtown Manhattan. It wasn’t 30 years ago, though, that Republican Alley, which ran west from Elk Street — itself a leftover piece of old Elm Street that wasn’t eliminated when Lafayette Street was bruited south over its old path early in the 20th Century — was a rubble strewn path awaiting condemnation. This must have been the only telephone-pole mounted streetlamp in Manhattan, and it had one of those small lamps usually used to light parks appended on top. Yellow and black street signs, the type repalced in the mid-1980s, are still in place.

The photo of Republican Alley is shot from Duane Street, looking southwest toward Elk Street. The rundown building has been spruced up and is still in place, but all that remains of Republican Alley is a pedestrian walkway on the south edge of the African Burial Ground (a cemetery was discovered during excavations for a new office building in 1990, and the remains found there were removed and later reinterred as part of a newly built National Monument).

A walk in AUBURNDALE