A walk in AUBURNDALE

In 1901, Auburndale, east of Flushing, Queens, was empty farmland. Enter the New England Development & Improvement Co., which bought the 90-acre Thomas Willets farm, and lo and behold, Auburndale the community was born. The name comes from Auburndale, Massachusetts, the home of L. H. Green, who developed the community starting in 1901, when the Long Island Railroad started offering train service to the area. Auburndale’s early station house stood until 1929, when the grade crossing at Utopia Parkway was replaced by an overpass and as a result, Auburndale is one of the handful of LIRR stations without a station house. information from Ron Ziel’s Victorian Railroad Stations of Long Island 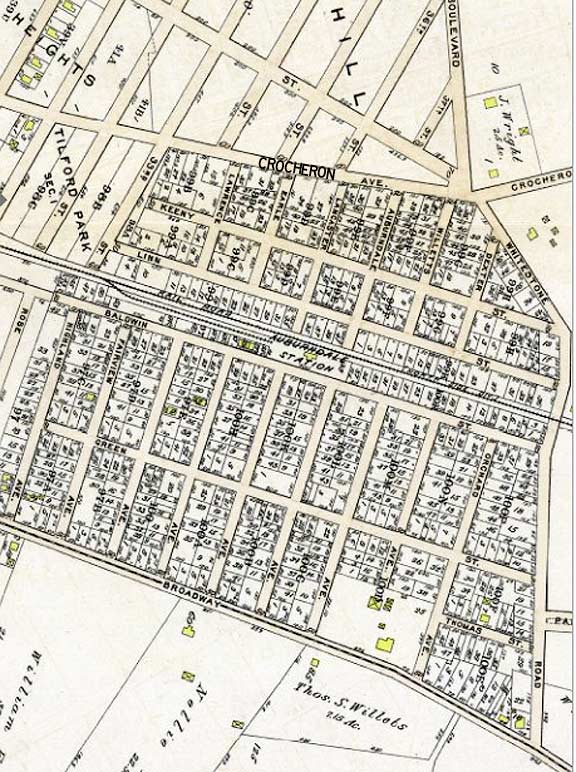 1909 map of Auburndale between today’s Utopia Parkway, Francis Lewis Boulevard, Crocheron Avenue and Northern Boulevard, shows most of today’s Auburndale streets were already in place; note that while lots were drawn up, at that time houses were not yet constructed. Today, Auburndale is host to a great number of garden apartment buildings with a smattering of private homes. The “Whitestone Road” at the east end later became Cross Island Boulevard and later, Francis Lewis Boulevard.

Farmer John Crocheron settled in the Bayside area in 1695. Descendants Henry and Jacob Crocheron were US Congressmen in the early 1800s. 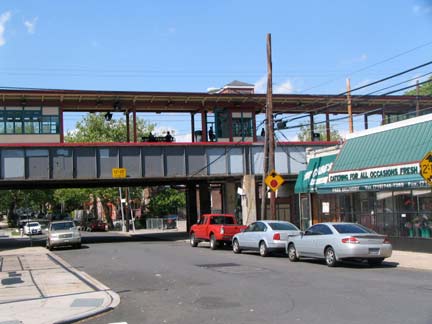 Present day elevated Auburndale LIRR station, in place since 1929. It underwent a major renovation in 2003.

Some old forms persist in Auburndale on 42nd Avenue: a levered fire alarm, an orange cylindrical fire alarm indicator (now being phased out), painted luncheonette sign, and rusted clamp that formerly hald a street sign. Just before being repalced by vinyl signs in the 1960s, older Queens street signs were generally white with black lettering. 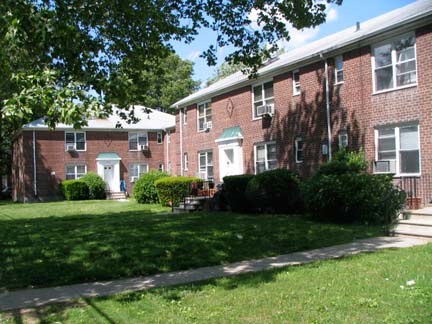 One of the typical garden apartment complexes I spoke of. 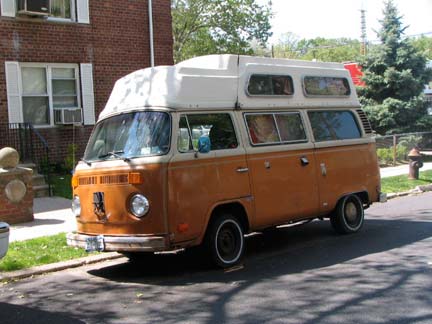 On 192nd Street I found one of my favorite species of motor vehicles, the Volkswagen bus. I’d have to call this a Type 2 T2, recognizable by the vents in front and single windshield, but I could be wrong — correct me. This type was introduced in 1967. 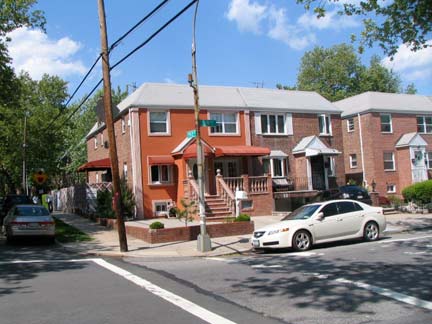 Postwar 2-family homes on 39th Avenue and 192nd Street. The owner of the corner building has given the brickface an unattractive makeover (you can’t improve on brickface, why try?) 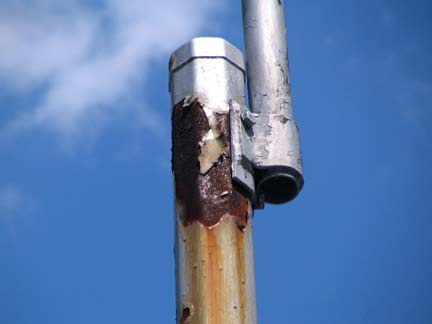 On the corner is a first generation 1950s octagonal pole streetlamp. How can you tell? Very simple: the cap at the top of the shaft is smaller. It originally bore a curved mast supported by a bracket but these were largely supplanted by cobra necks in the Swinging Sixties. 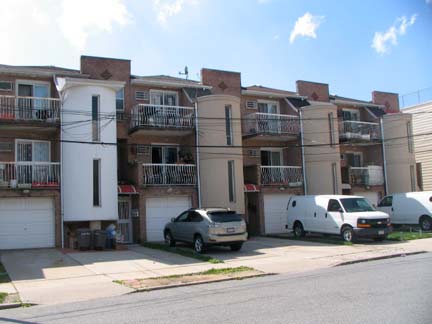 Someone tell me what these structures on the back of 195th Street residences are — fire escapes? 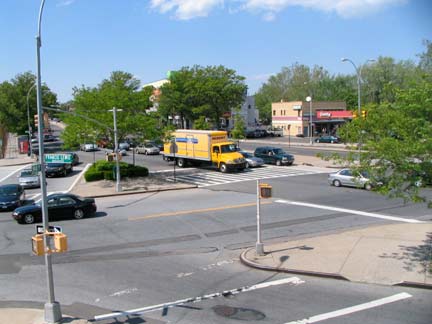 Francis Lewis Boulevard and 35th Avenue seen from balcony of office building. (Where I get my taxes done, in fact.) 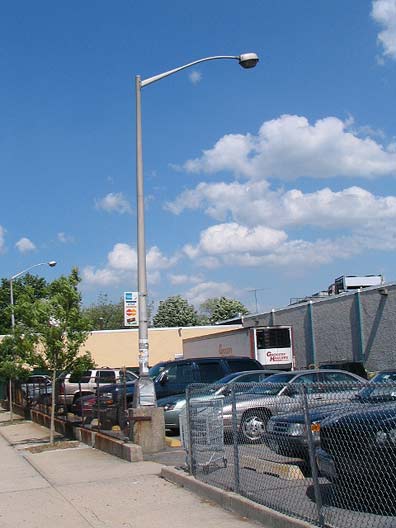 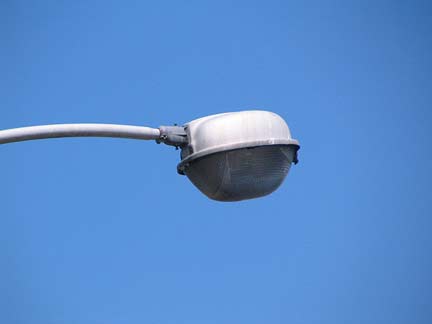 Parking lots, such as this one on 35th Avenue and Frannie Lew, can sometimes be the repositories of outmoded streetlamp designs. NYC has never employed this type on public streets. The lume somewhat resembles the old GE F400 clamshell, but it’s a bit squatter. Anyone know which one this is? It’s also similar to the Westinghouse OV-20. Both forms first appeared in the Fab Fifties. 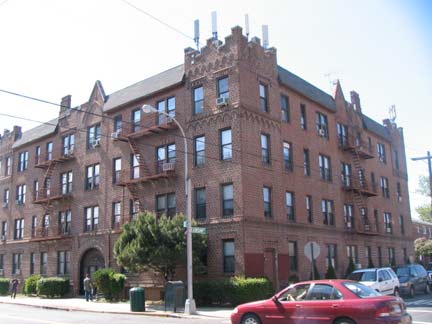 One of eastern Auburndale’s rare older apartment buildings, Jordan Street and 32nd Avenue. Jordan, which replaces 199th Street, is one of the few streets in the area without a number. 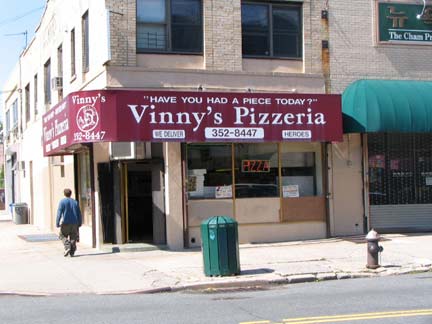 Some language snobs insist that NYC pizza slice is never called a “piece” but this awning sign refutes that assertion. Nice use of the Baskerville font. 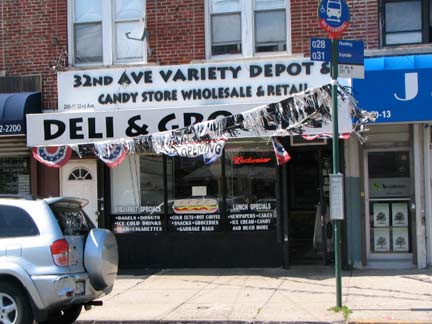 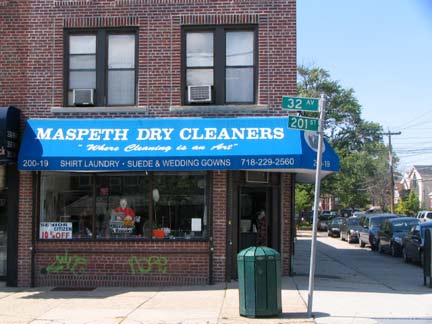 32nd Avenue. You know what, I’ve seen the font on the above awning sign before, but can’t quite place the name now — fill me in. Below: Maspeth Dry Cleaners, a long way from Maspeth, at 201st Street. Perhaps the owner was originally from there or the business was originally there. 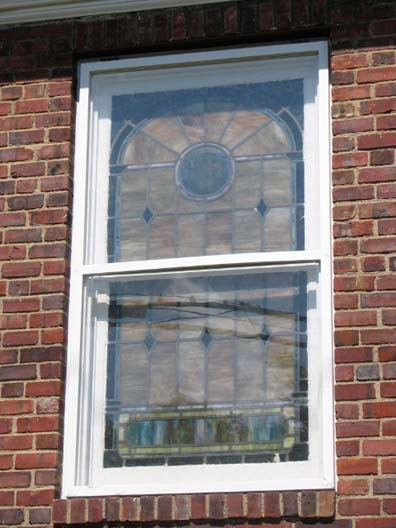 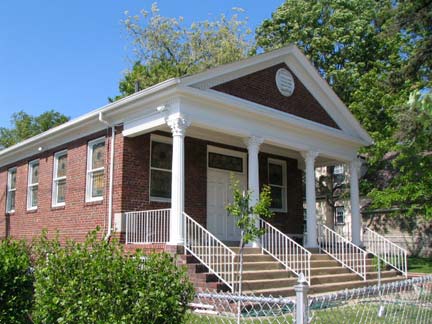 33rd Avenue and 204th Street. This Corinthian columned building resembles a church, and the windows resemble a church, but it’s unmarked and is a mystery to me.

Apparently it was once a nondenominational church called the Second Church of the Four Leaf Clover. It was later taken over by a temple associated with Sri Chinmoy. 35th and Clearview. Classic Deskey post, along with the fire alarm light designed expressly for it, along with a neon liquor store sign. Unfortunately the neon tubes disappeared a long time ago. 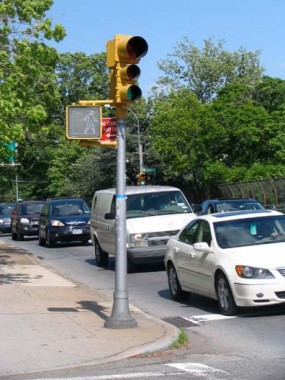 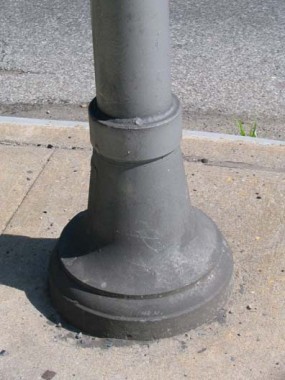 We’ve seen how you can differentiate an older model octagonal shaft lamppost from the newer models. It’s even clearer on these mid-century model stoplights — for the first ten years or so, they had these sculpted bases. Since the 1970s, they’ve been streamlined boxes.

33rd Avenue and 204th Street. This Corinthian columned building resembles a church, and the windows resemble a church, but it’s unmarked and is a mystery to me. You’re right it’s a church, I grew up on 203rd. St and 33rd. Ave during the 1960’s and it was a Lutheran church. looking at the front of the building, on the lower left hand side was a cornerstone that gave the name of the church and the year

Those flute-shaped pedestals still linger throughout New York City today. I’m aware of one that still exists on Staten Island.

The unidentified clamshell luminaire is a 250-400 watt Joslyn MV131.

I grew up in one of those garden apartments that backed up to the LIRR. I remember watching the trains stopping from my bedroom window. It was a big deal to get a quarter to go to the candy shop. My mom was the bookkeeper at the grocery ok’ing Station Rd. My Dad worked for Con Ed and I saw my uncle every day on patrol for NYPD. My grandparents lived in Bayside. It was heaven.

This is great stuff the picture of the garden apartments with the trees ..on the right side of pic is my house…oops my garden apartment where I grew up and where my mom still lives …and luncheonette sign is below my childhood friends we hung out on these corners in these pics growing up ….

as kids (in Bayside), we did actually also say ‘piece of pizza’..

Too bad you didn’t show the beautiful tudor garden apartments on 37th Ave btwn Utopia and 190th St—real Auburndale and where I was born and raised. Anything east of Franny Lew is Bayside. And yes, it’s a piece of pizza