On Sunday, October 16, 2011 I agreed to meet up with a Open House New York-sponsored Newtown Creek walk led by the Newtown Pentacle‘s Mitch Waxman. Bloggers like Mitch fill in the cracks left over from more mundane and humdrum NYC chroniclers, who steer crowds toward the King of All Buildings and Lady Liberty, which have their own charms. But once in awhile, you need to actually see how the remainder of NYC is like, and not just the entertainment districts of Greenwich Village, Times Square and Williamsburg. Sometimes you need to go to a place where on a Sunday morning you can yell and hear your echo. There’s plenty of time to thrust into the crowds.

The weather was so good I decided to shoot the Borden Avenue Bridge, on which I briefly chattered with the crowd. Conditions like this do not occur all that often.

Borden Avenue was built as a plank road in 1868; at first it extended east only as far as Calvary Cemetery, but by the 1920s, it had been built as a main traffic route as far east at Grand Avenue and 69th Street in Maspeth. When the Queens-Midtown Expressway was built after World War II, Borden Avenue became the service road on the north side of the expressway and it still terminates at Grand and 69th — east of that, the service road is labeled Queens-Midtown Expressway. All service roads change to Horace Harding Expressway east of Queens Boulevard.

When the plank road was begun in the Andrew Johnson Presidential Administration, engineers were immediately met with a problem in that Dutch Kills, an inlet of Newtown Creek trafficked by cargo vessels and other shipping lay in the way. A wood bridge was hastily slapped up, but the dangers of such a structure were realized almost immediately and an iron bridge was built in 1872.

That bridge, as well, was replaced in 1908 by the current structure, a retractile bridge that can swing diagonally along tracks that greatly resemble railroad tracks to open the bridge if a vessel wishes to pass down Dutch Kills. Though there had not been reason to retract the bridge since 2005, in 2007 the structure had been judged too deteriorated to allow heavy truck and bus traffic to continue to use it, and it closed for repairs for two years. 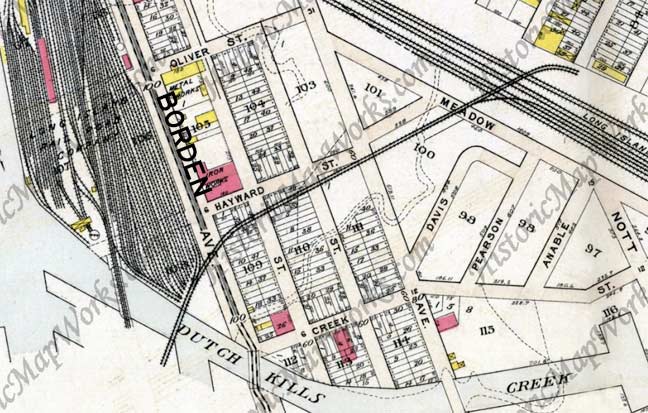 This photo, with the east on the bottom, shows the general street layout of the area in 1909, when the bridge was new. A streetcar line ran east on Borden Avenue from Hunters Point to Newtown. Amazingly enough the street layout of 1909 is still intact in 2011, though the streets have been numbered except for Borden Avenue (which would be 52nd Avenue if it were numbered). The Queens Midtown Expressway now soars high above the area between 50th and 51st Avenues. Meadow Street has become Skillman Avenue, and Dutch Kills Creek was recognized as a redundant name and is now plain old Dutch Kills.

KNOW YOUR KILLS: In Queens and Brooklyn, it’s Dutch and English Kills, but in Staten Island, it’s Arthur Kill and Kill Van Kull. The derivation is Dutch, for “water channel,” and in modern Dutch is spelt kil. 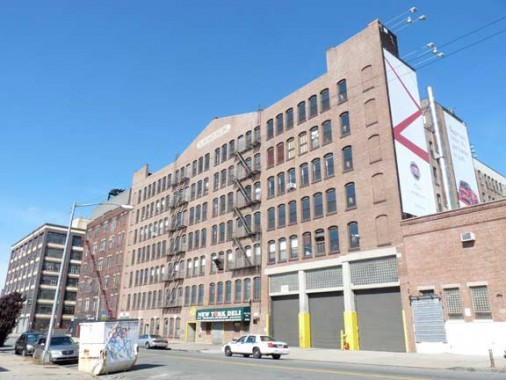 The Blanchard Building is the largest building on Borden Avenue west of the bridge. J.F. Blanchard was a manufacturer of fireproof doors and shutters; after a series of mergers it is now part of United States Metal Products. The building now houses a variety of businesses. Looking west on Borden Avenue, with the ramp to the Pulaski Bridge to Greenpoint in the foreground and the King of All Buildings lording over the rear. 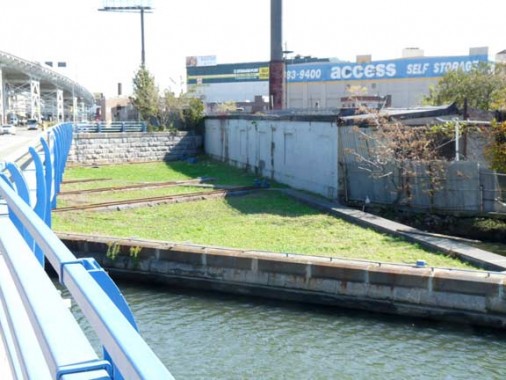 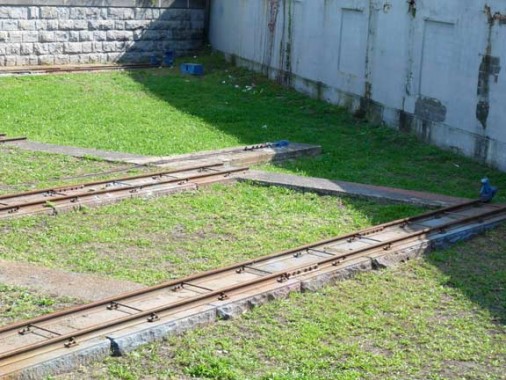 Three views of the retractors, which are very like narrow gauge railroad tracks. The bridge can roll on wheels supported by the tracks. 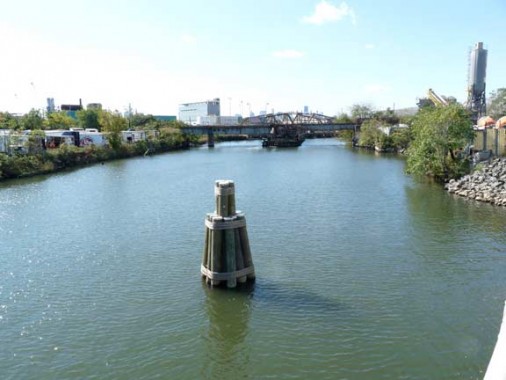 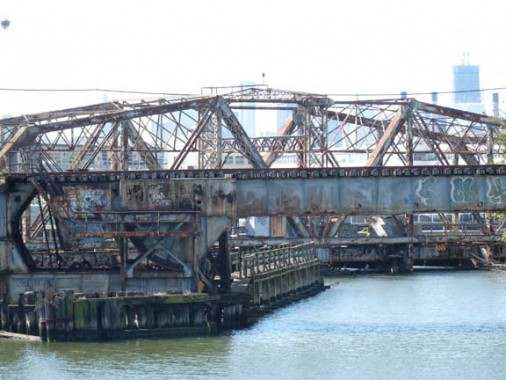 An iron swing bridge carries the single-track Long Island Rail Road Montauk Branch over the Kills. The bridge has not swung in years, and would need repair if it had to do so in the near future. 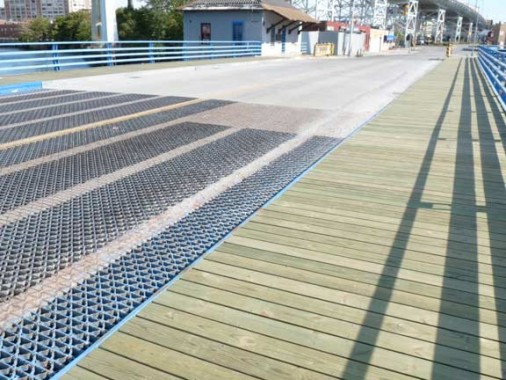 The Queens Midtown Expressway, which a few hundred feet to the west enters a tunnel deep under the East River, soars high above the Kills. Like the IND Subway at Gowanus Canal, it was built high to allow tall masted shipping to proceed through, which it no longer does. 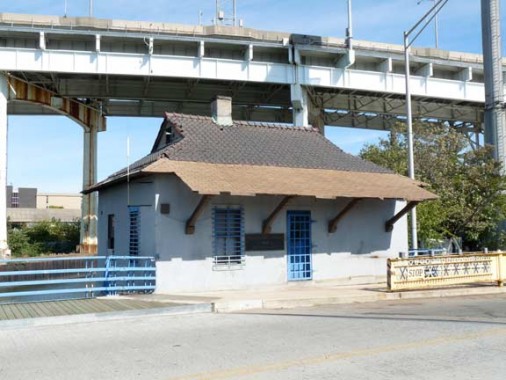 The old bridge keeper’s building was allowed to remain during renovations. 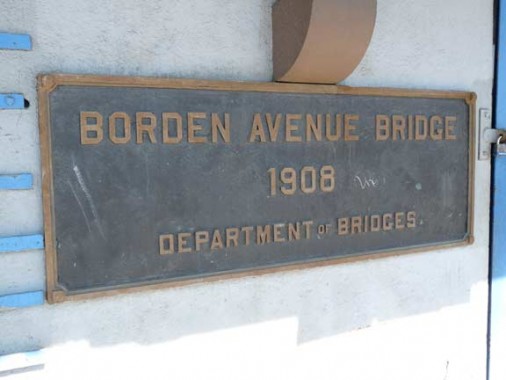 Walking west on 51st Avenue, which is pretty drab except that one property owner has created a well-manicured garden next to the driveway. 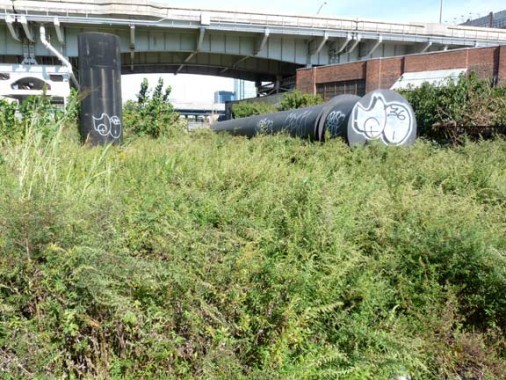 Compare to the property next door, where the weeds have been allowed to proliferate. 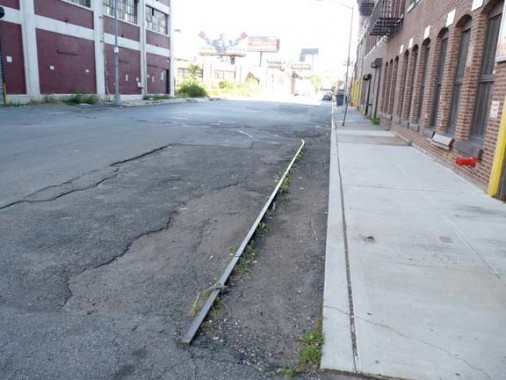 On 51st Avenue east of 21st Street, evidence persists of a rail spur from the connecting Long Island Rail Road to a factory on the south side of the street.

I would love to know what the logic was in repairing this bridge in the first place. I mean, it’s nice that it canopen and close to river traffic but there is no river traffic to speak of. There are no businesses on the water between this bridge and the head of the creek. The railroad bridge that is pictured just to the south of this thing has not operated since Glen Miller could be heard on the radio. This bridge was closed to traffic for the longest time so it could be repaired but it still does not make sense to have an operational bridge with no traffic for it to work for.

Well, it was repaired for safety’s sake.

I can fully understand it being repaired but I cannot get why they had to rebuild the mechanical part of it. This thing does not have to move for any traffic. The city could have built a solid conduit that would have aken a whole lot less time and cost a whole lot less money. The replaced the Stillwell Avenue Bridge that way, they should have done this thing that way too.

This bridge supplies a “back door” to Hunter’s Point Ave. when the overhead LIE/QME is taxed. I just used it last evening as a matter of fact.

On the north bound/Queens bound side of the Pulaski bridge there is an extension sticking out of the bridge. Where was it supposed to go to? I have looked every where can find no mention of it. Was wondering if you knew? Thanks.