Since I was hired to work in the Flatiron district in Manhattan in November 2011, I started sniffing around for places to eat lunch before actually beginning work. I will be doing a number of posts from the Flatiron as it has spectacular architecture; although boxy glass towers have now begun to dot the landscape, Beaux Arts is the predominant form especially along 5th Avenue and 6th Avenue, the Ladies’ Mile, just west of that.

While shuffling about avoiding fast-walking Manhattanites (I will have to get used to the pace) I noted that most of the treasured Type 24M Twinlamps on 5th Avenue in the Flatiron had all had work done on them to a degree. Here’s what I took away: 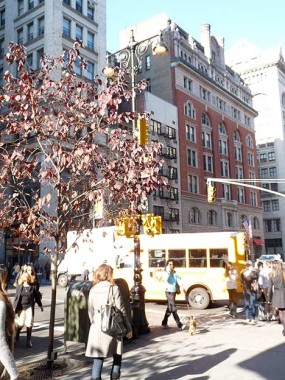 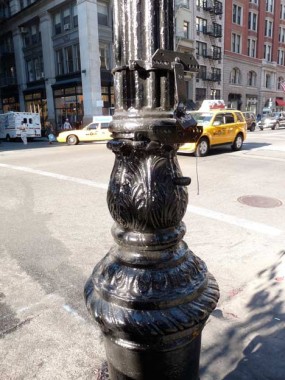 There are five remaining Twins on 5th Avenue: this one, on the SW corner of 19th, two at Madison Square at 23rd, another at 28th, and the last at 32nd. With one exception they are all Type 24Ms. 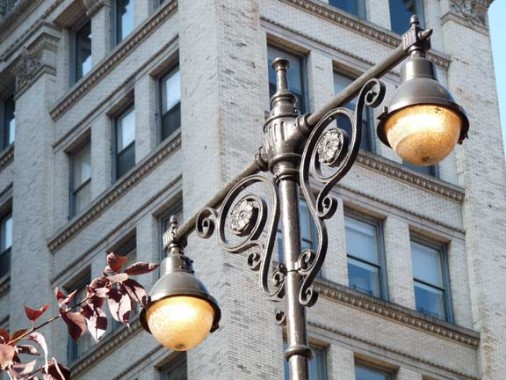 Both of the Westinghouse cuplights on the 19th Street post had, till just recently, been allowed to remain their original metalic gray and had never been painted at all. In 2011, the whole post including the lamps was repainted black, the color of choice for most original and retro castiron posts these days. When first erected in the 1910s or 1920s the post was painted chocolate brown.

I could do without the Department of Transportation allowing it to dayburn — when the incandescent bulbs burn out, they tend to stay that way for quite awhile. 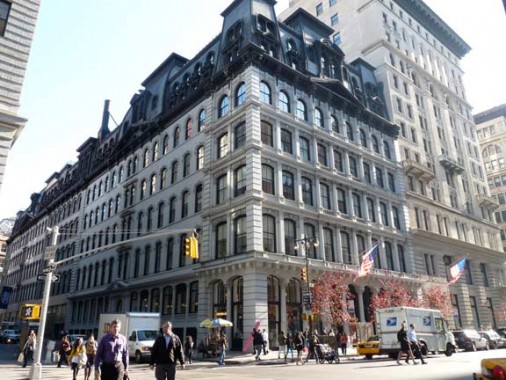 The 19th Street Twin stands in front of the robust former Arnold Constable Department Store building. The store was founded in 1825, the building went up in 1877, and Constable finally went out of business in 1975. 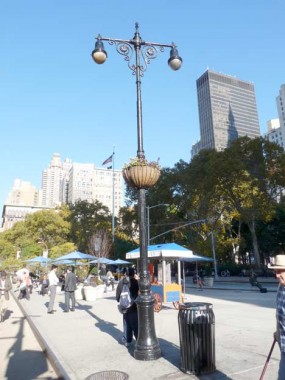 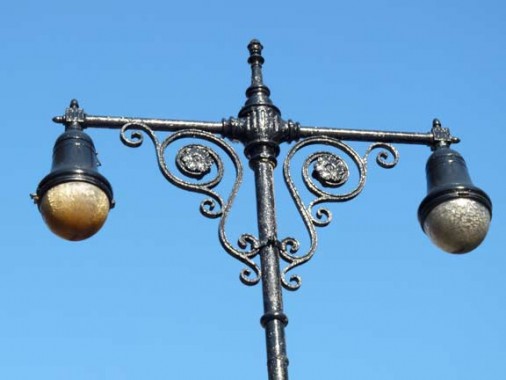 This newly painted Twin can be found on the traffic island at 5th Avenue and 23rd Street. The original diminutive triangle has been expanded greatly, with traffic reroutings, with Broadway squeezed from 4 lanes to two. This Twin was vouchsafed new bright yellow sodium lights sometime in the 1990s.

A brother across 5th Avenue standing in front of the Henry Hardenbergh Western Union Building came down after a truck murdered it in the mid-2000s. 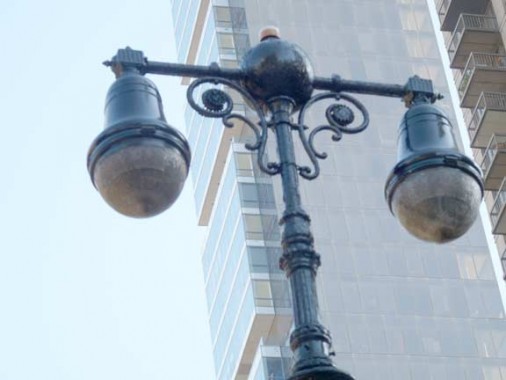 This Twin stands at the SE corner of Madison Square,  in front of the statue of  William H. Seward, United States Secretary of State under Abraham Lincoln and Andrew Johnson. His “Seward’s Folly” in 1867 was the purchase of Alaska which he finally negotiated to acquire from Russia; Alaska became the 49th State on 1/3/59.

The Twin mastarm is the form of the originals installed on 5th Avenue in the late 1890s. Gradually the Type 24M’s mixed in until the ratio was about 50-50 when most were torn down in 1965. However, this original mast was placed on a Bishop Crook Type 1 base at some indeterminable time decades ago, making this post an unusual hybrid. 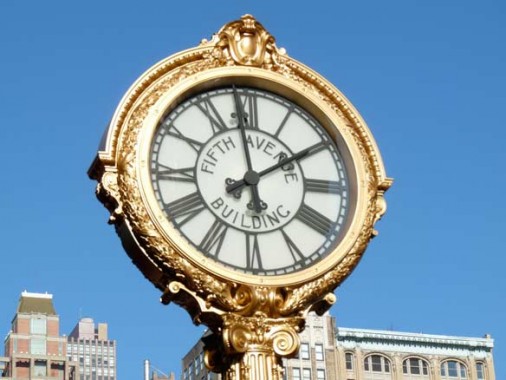 I can’t discuss 5th Avenue street fixtures without a mention of the 5th Avenue Building Clock, just north of 23rd. The clock was installed in 1909 and was restored by Tiffany & Co. when the firm relocated here. The clock has been a NYC Landmark since 1981. 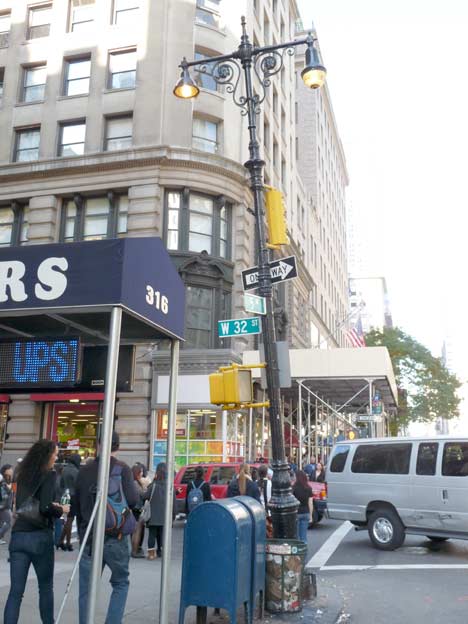 Lastly this post at 5th and 32nd Street has gotten a new paint job and light bulbs, but the rehab job ended there, seemingly unfinished. This is the only Twin in NYC that has both 1940s Cuplight and 1930s Bell lamps. 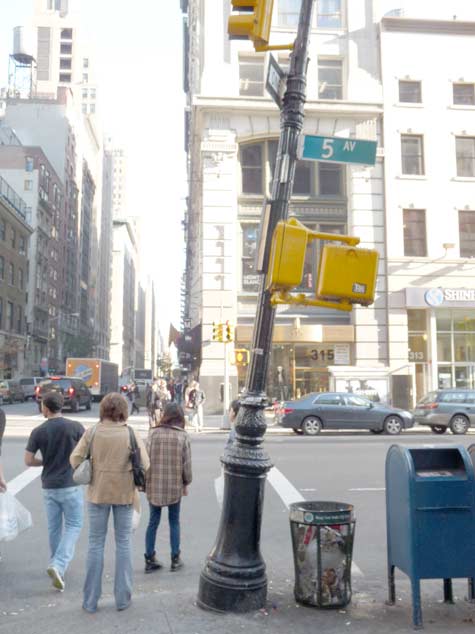 As you can see it’s listing over at a more severe angle than the Leaning Tower of Pisa. Another hurricane like we got in September [2011] , and… and … 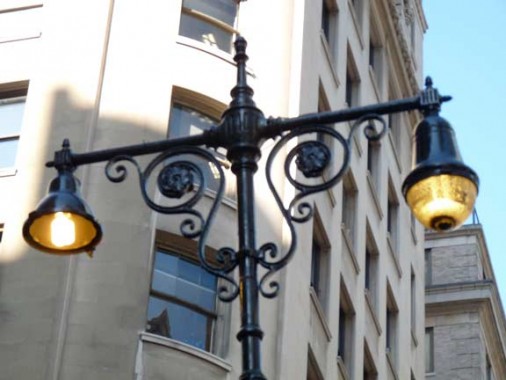 There’s also the glass diffuser question. The Bell’s diffuser is dirt-encrusted, while the Cup hasn’t had one for years. 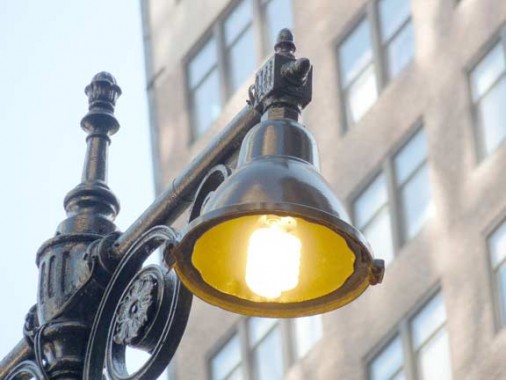 This is the first time I’ve ever seen a new energy-saving corkscrew bulb in a NYC lamppost. This should at least have the dignity of a glass reflector bowl to cover it up. And why the dayburn?

I’m just glad to have these posts, but half-assery in their upkeep is not cool.

I worked at 1107 Broadway (main office for McCrory Stores) in 1949. My first job and first time on my own in NYC. I was a Queens girl who never ventured into THE CITY. I enjoyed seeing all the pictures of my former work place. My future husband worked across the street from me on Madison Ave.. Thanks for the memories.

Kevin: Perfect timing–I’m making my annual New York City trip tomorrow, and the 5th Avenue twins will be my first stop! Glad to see that 5th and West 32nd is finally working again–it seems like it had been out of order for years, despite my calls to the 311 number when I was in town. Thanks for the (happy) update. Now if we can just keep the pole from toppling over …

Kevin – Congratulations on the new job!

For reasonably priced coffee and decent pastry try the cafe 28 on the SE corner of 5th and 28th. It was discovered and
became a favorite spot for a morning snack last winter when I had to be in the city for 10 weekends .
All of the local cops stop in there for a quick bite as well. Great you are now working in the flatiron district.
Wonderful indoor flea market/ antiques on 25th street in a parking garage between 6th and 7th Ave. on the weekends too.

5th and 32nd – Doesn’t look good for long-term survival. Looks like it’s gonna fall over any day now. Maybe that’s why they didn’t bother replacing the diffuser on the cuplight – if a replacement were even obtainable.

Ditto on the congratulations, Kevin

Great page as usual Kevin. Congratulations and best of luck with your new job!

Kevin, Note that these lights have no photocells. Inside that extremely large base is a electromechanical clock. Manufactured by the Intermatic Corp. With power failures, brownouts,etc. its probably out of sync, or defaults to on if the clock fails.

Hey, Kevin, you absolutely have to try Eisenberg’s Deli on the corner of 5th and 22nd, it’s an institution! http://www.eisenbergsnyc.com

Glad you got yourself work. Especially in this day and age. Congrats. Hope it’s what you like.

I love seeing these old dears in place.

Hey, Kevin! Back from my NYC trip. Belated congratulations on the new job. Those twisty bulbs in the 5th & 32nd light look to be almost incandescent at night. Which probably shouldn’t be too much of a surprise if the DOT is using a household soft white bulb with a Mogul to Edison step down device. Interesting that the light at 5th & 28th is still using good old incandescents bulbs and wasn’t converted to twisty. Maybe 32nd has been rewired to low voltage, but 28th remains high voltage? Also noted that the pole at 28th hasn’t been repainted–probably that darned building scaffolding brushing up against the pole that made photography almost impossible.

Found a good Chinese restaurant on 35th between 5th & 6th (North side, closer to 6th): Hyo Dong Gak. Might be worth a try if it’s not too far for a lunch-time walk.

On that “twin lamp” pole at 5th and 32nd St. The missing glass diffuser may be replaced since there still may be some cup light fixtures somewhere in the “big apple”, used or not. However, it’s hard to tell if the hinged ring that holds the glass diffuser in place or not which may explain why no glass diffuser.

That being said, this pole should be removed and placed in storage while the foundation is repaired and pole returned to it’s home corner.

Toured the Avenue last week. At least hurricane Sandy didn’t topple the pole at 5th & 32nd. But its lights are out again. I’ve reported it–hope NYCDOT repairs it in a more timely manner. Last time, the lamps were dark for about 7 years.