By the first decade of the 19th Century, New York City was beginning to outgrow the small area at the tip of Manhattan Island that had defined the city limits ever since a permanent European settlement was established in 1625, give or take a year. The rest of the island was divided up among landed gentry and farmers, and traversed by country roads. There were hills, some of them high; boulders and rocks, some of them iceberg-sized; and streams and ponds.

In 1807 the city petitioned the state for permission to expand and come up with a city plan. A group of commissioners decided a grid street plan was the best way to go–other cities such as Philadelphia and Savannah, Georgia had adopted successful grids. And, other than the area around the Battery, Manhattan had already developed along a rough grid.

The commissioners drew up a map beginning in 1807 that looked like this. A grid was platted as far north as 155th Street; the mapmakers believed it would take over a century for development to reach that far north. A young surveyor named John Randel Jr. was assigned to formulate a team and formally survey the grid, from North Street (today’s Houston) north to 155th, from river to river. And so they did. 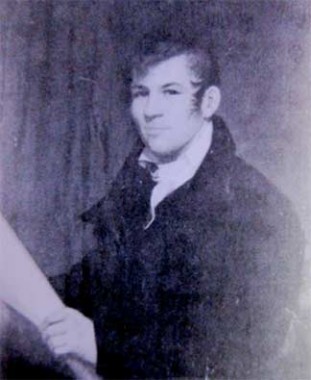 John Randel Jr., the secretary, surveyor and chief engineer for New York City’s street commissioners, was hardly the most popular public servant of his day.

Beginning in 1808, Randel and his colleagues were pelted with artichokes and cabbages; arrested by the sheriff for trespassing (and often bailed out by Richard Varick, a former mayor); sued for damages after pruning trees; and attacked by dogs sicced on them by property owners irate at the prospect of streets’ being plowed through their properties… NY Times

Randel and his team, using the hand surveying tools of the day, measured precisely the street grid everyone traverses today when in Manhattan, with a few exceptions. Madison and Lexington Avenue are new additions, and small ‘towns’ up-island such as Manhattanville were later incorporated into the grid.

Randel’s team roved the island, through thick brush, rock outcroppings, and avoided the occasional angry watchdog or charging bull. By 1811 his survey was complete, but then came the actual mapping and surveying job, done over the next 10 years. 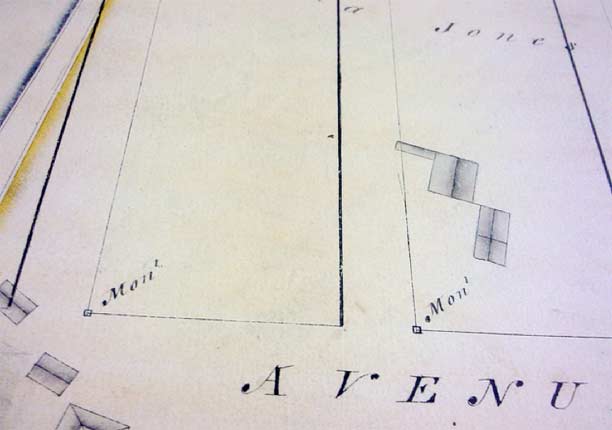 A meticulous hand-drawn survey map was prepared, indicating everything on the surface of Manhattan island — what few existing roads there were, houses and rocks (some were in planned roadbeds and would have to be moved or destroyed). When creating such a large survey, the expansion of metal rulers at high summer temperatures were calculated — using longhand math, not battery calculators. Even the curvature of the earth would have to be considered for such a large area.

On the above map note two squares marked “Mon’t.” Randal’s team demarcated the intersections of surveyed north-south avenues and east-west streets by placing monuments on one of what would be street corners (here, the northeast corner). As a rule the monuments would be three-foot high marble monuments with the street and avenue marked at the apices (a surviving marble monument, found at 4th, now Park, Avenue and East 26th Street while excavations were taking place in the 1890s for the second Madison Square Garden, is on display at the Museum of the City of New York.) However, where rocks and stone made it impractical to sink marble, iron bolts were used instead.

Two of these iron bolts, positioned around 1815,  are still in place today. 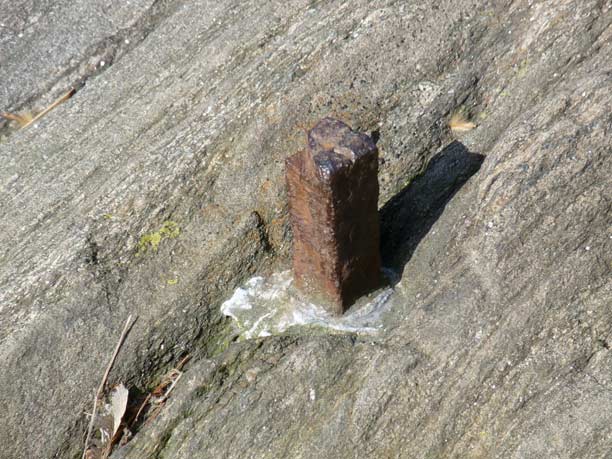 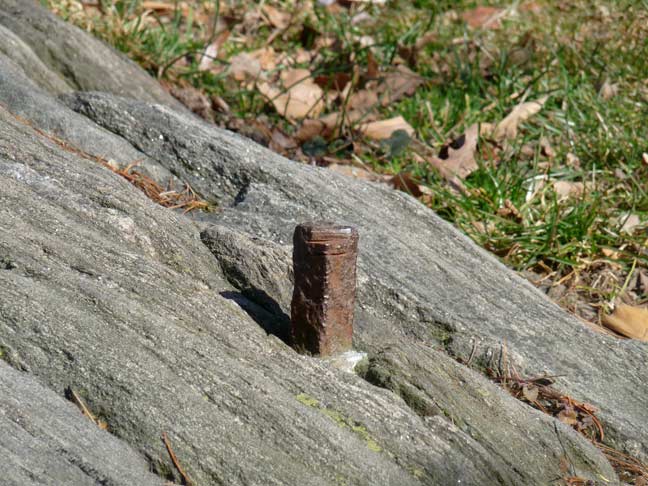 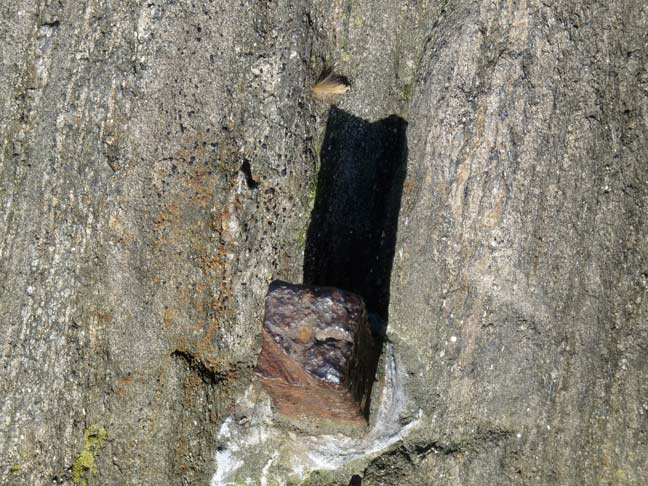 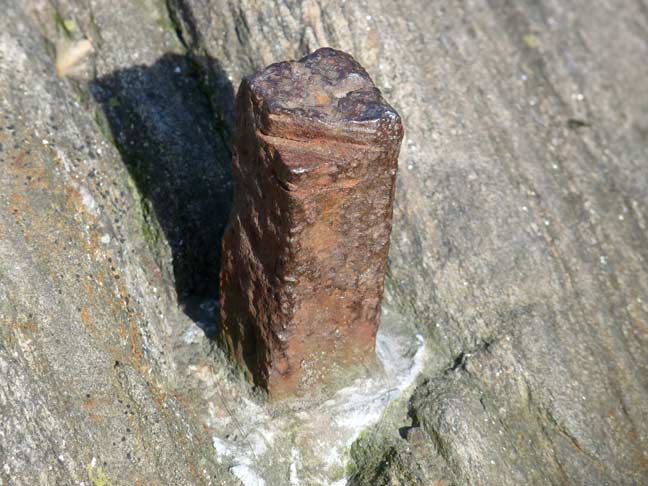 This bolt, installed by Randel’s team, does not bear street markings as do the marble monuments. The only embellishment is the cross at the top, which matches up with the alignment of the street grid. This one has had a chunk taken out of it, probably by a lawnmower — demonstrating the fragility of these nearly 200-year old objects. 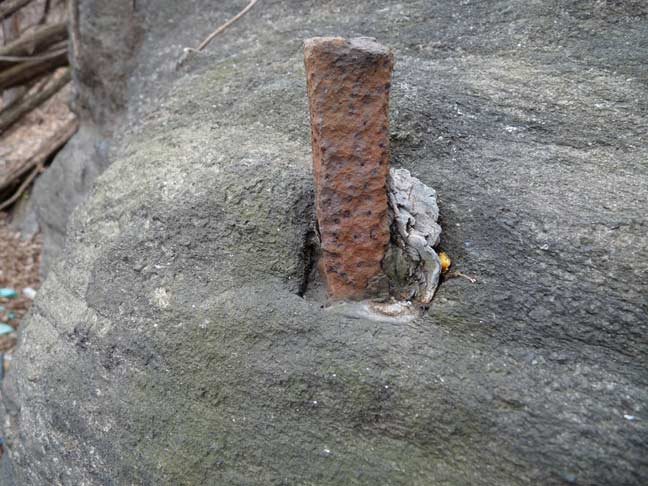 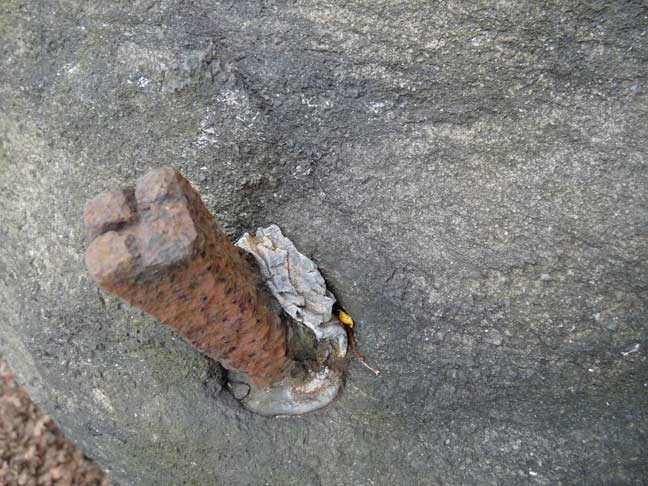 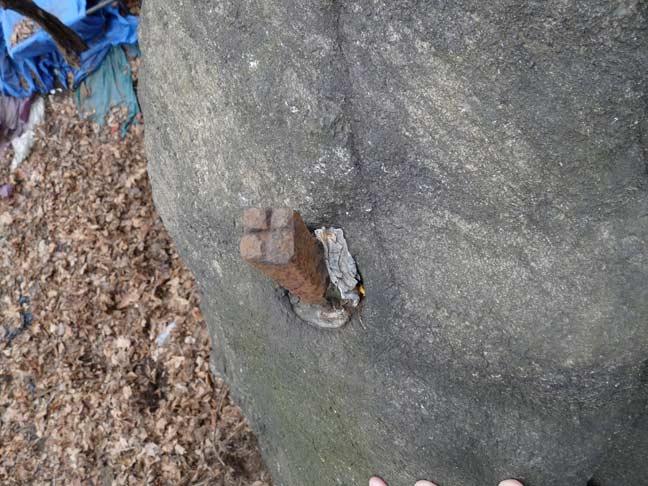 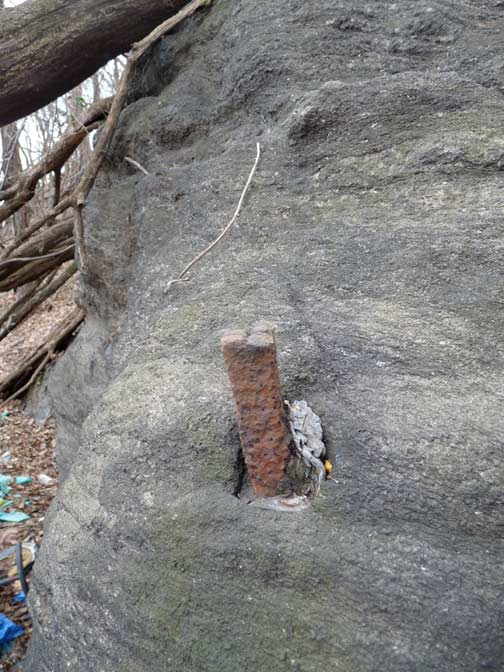 A second such Randel marker bolt has recently been discovered. It, too, is marked with a cross that aligns with the street grid.

Where are they? Both are in public parks that were designed after the grid was. The location of the first is somewhat known among cognoscenti. The second, not so much. You’ll have to beat their locations out of me with a wet noodle. Knucklehead souvenir hunters will remove them with acetylene torches. I’m doing too much with this page as is. If anyone reveals the locales in Comments they will be immediately removed ….

Special thanks to Caleb Smith.

Great job in taking these pictures. I think I know roughly where one of them is, but I’ll keep the secret.

Good one Kevin. Keep your secrets.

I saw a show once on one of the local PBS channels that pertained to the grid. Some fellows were scouring a park (I won’t mention which one but that’s no great secret) and found two of them. Others may yet exist but haven’t been found yet.

Not a great idea to highlight these. They will be hunted and desecrated.

Yes. They will be. Take a close look at one of the bolt. A lawn mower took a bite out of it the past few years.

What would a lawn mower be doing on a rock?

That’s also what I thought. Who would be lawn mowing rocks? I’m of course dying to know the location of these but, just so I could check them out. Unfortunately I understand why one would want to keep it a secret. If anyone wouldn’t mind sharing with a New Yorker who is just interested in an up close look at these please email me the location at James(at)thewallbreakers(dot)com

You wouldn’t be, but if the handle slipped the mower might leave the grass and hit the rocks.

Those bolts remind me of what I found in the woods in northwest Massachusetts many years ago: a 3-foot-tall stone column with the state lines of Vermont, New York and Mass. incised on its square top. It was near, but not on, a trail, and looked forgotten because there was no trace of a spur leading to it from the trail. Of course I could do a Web search to learn about it but would rather just remember the day I was in three states at once.

I saw that tri-state marker 20 years ago. The monument at the intersection of Massachusetts, Vermont, and New Hampshire (“The Mud Turtle”) is safe … it lies under the Connecticut River.

But really,who would bother taking them in the first place?
“AT LAST!! I finally have the ancient iron marks!!!”
“Mine,do you hear me?….. ALL MINE!!!”
followed by maniacal laughter

Has anyone started the process of trying to preserve these vital links to the city and our nation’s developement yet?

Great stuff. Keep up the good work Kevin!
I wonder if the accuracy of their suveying can be tested with the surviving benchmarks?

I would love to see these as well. Too bad that we have to worry about people who would steal or vandalize them. All benchmarks, especially the disks, have had that problem for years.

That would suck if someone tripped, fell and hit their heads on those things.

Who mows a lawn on a giant rock?

No one would, but if you let go of the handle when it’s on the grass, it might nick the spike.

How can it be possible – two “Roger the Shrubber”s exist? Unless this commenting Shrub’s from Chicago, there MUST be two. Disturbing.

The Knights Who Say “Ni!” have many acolytes

The top one was cut with a hacksaw, the bottom one also had a quadrant altered but it’s not obvious how due to corrosion. Since Randal only monumented on corner of each block according to the map, it appears that the marked or altered quadrant is on the inside of the block.

You could tell us….but then you’d have to kill us!

The second one should be very easy to find. The items that surround it give the location away.

I promise not to tell 😉

Hi, I’m not from NY, but I’m a history and adventure buff . I think this would be a fun find next time I go back to NYC. I will promise to keep the second one’s location a secret. You don’t have to tell me where it is, but you said the surrounding locations can help. Can I at least get two (three if you’re feeling generous) distinctions for these surroundings? So I can sort of triangulate it. Thank You.

Can’t risk anyone removing them…

Would you care taking me there should I happen by NYC sometime? You can even blindfold me and everything.

The map below Randel is from then proposed Avenue B (now East End) on 81 and 82nd St. looking westward. So these 2 monuments were located on NW corner. Not all markers were placed on NE side. And that “a Jones” is Joshua Jones. Found the first bolt this week. On a mission to seek out the second one now.

So THAT’S what those things are.

I’m not going to say where I saw them. But that’s really cool! Thank you!

I saw one of them last year,,and went back to “visit” again yesterday. my biggest fear was that it would not be there.
Happily, it was,,,,took some pictures,,,told a friend,,,but didnt say where it is. it is a treasure in its own way.

I recently found a bolt in a rock, in a public park like this one… but it is rounded not squared. Is the rounded bolt anything?

Send me a PM with where it is…

These would surely be a fun find. I know no one would be telling where the second one is, but is it at least in the same park as the first one?

still don’t know where to start looking to find the second. riverside park?

I found what might be one of those grid bolts going to take another look at it & take pics. It’s more round than square & 3nails are included. It’s in a rock & north of 81street .