Though College Point, in northern Queens east of LaGuardia Airport and bordering the East and Flushing Rivers, is served by four bus lines, it’s considered one of Queens’ out-of-the-way outposts, since it’s severed from the rest of the borough by the old Flushing Airport site and the Whitestone Expressway. Only three main roads lead there: 14th and 20th Avenues and College Point Boulevard.

For that reason, its architecture has held on to the past longer than most Queens locales, though the Boker Mansion and Flessel’s Tavern have fallen to the wrecking ball since Forgotten New York began operations in 1998. Even some of the buildings on my 2006 survey of the neighborhood have since come down.

“We have been hard-hit,” said Director Susan Brustmann. “We thought we were going to close last June.”

Tough times actually began for the cultural institution before that, according to Brustmann, when the state Legislature decided to eliminate member items, or discretionary funding, for elected officials to dole out to nonprofits in their districts.

After the bottom dropped out of that monetary avenue beginning in 2010, the institute fell on hard times.

But an increase in donors helped to ensure the programming continued. In addition, the institute held a variety of fund-raising events, like a haunted house and Taste of College Point, to generate some additional income.

“Because of all of that, we are still open,” she said. “We are not doing great, but moving in the right direction.” Queens Times Ledger

Even though it’s on the outskirts of town, the Poppenhusen Institute, 14th Road and 114th Street, has always been the community’s focal point and like many of our older landmarks, always faces difficulty. Here I’ll show you some of the Institute and hopefully, membership can be augmented and some financial relief can take place. 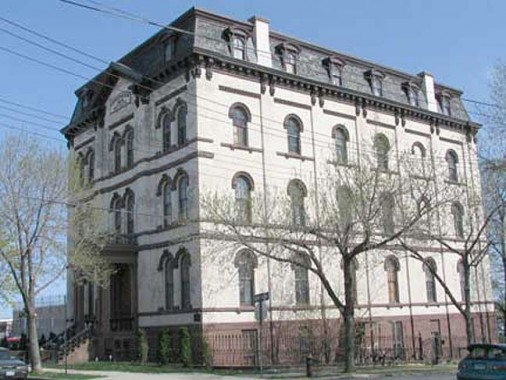 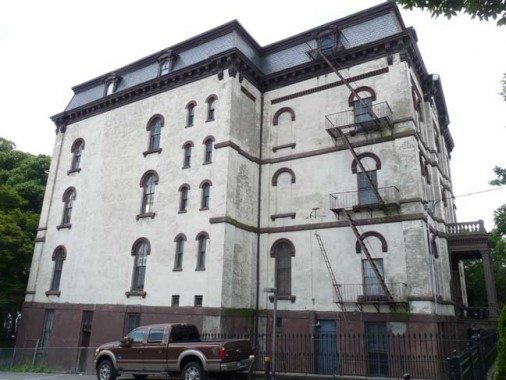 Manufacturer Conrad Poppenhusen’s philanthropy and good will was, in good measure, responsible for College Point’s early development. The Poppenhusen Institute, built in 1868 at what is now 14th Road and 114th Street, featured the nation’s first free kindergarten (est. 1870), as well as a justice of the peace, the first home of the College Point Savings Bank, German singing societies, the first library in the area, a court room, the Sheriff’s Office with two jail cells, and a grand ballroom.

Today the Institute is used as a community center and features karate and piano lessons, summer band concerts, a fire department museum and Native American exhibits, while the ballroom is rented for wedding receptions. 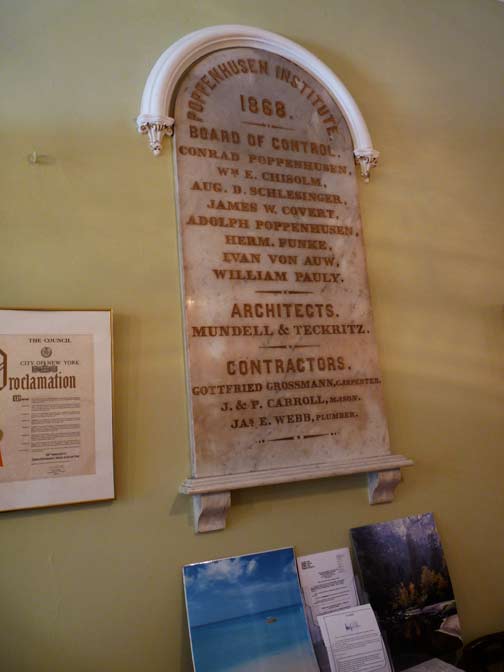 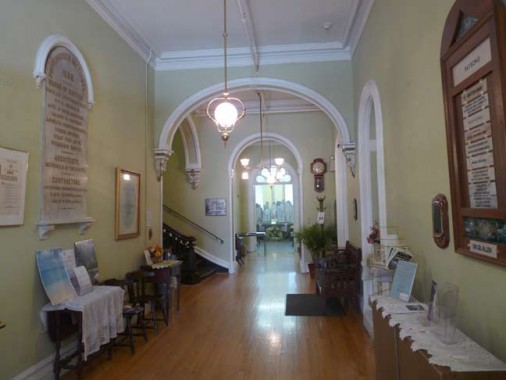 A look at the front lobby. A plaque contains the names of the building’s architects, contractors and board. 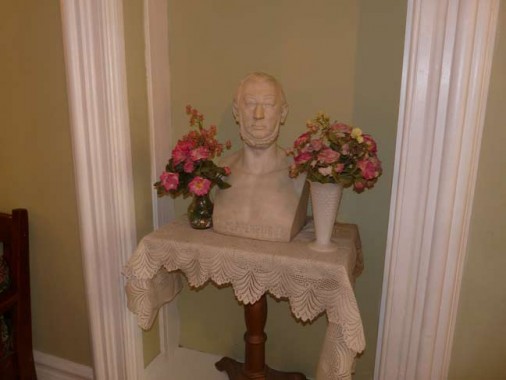 College Point was originally settled by the Native American Matinecocks. The Indians sold much of it to New Netherland Governor William Kieft in 1645. William Lawrence was the first British settler (College Point Boulevard’s name until 1969, Lawrence Street, honored the Lawrence family) and by 1838, Augustus Muhlenberg, rector of St. George’s Church on Main Street in Flushing, had founded St. Paul’s College in the area. The college foundered within  a decade, but College Point and College Place recall it.

Manufacturer Conrad Poppenhusen (1818-1883) arrived here from Germany in 1854 and converted College Point into a virtual company town. Poppenhusen opened a large rubber factory employing hundreds of immigrant workers and native College Pointers. He also built the Flushing and North Side Railroad, now a part of the LIRR Port Washington line. Poppenhusen built water and sewage systems, a library, and the Poppenhusen Institute, which included the first free kindergarten in the United States. He is recalled by the Institute, an avenue, an 1884 bust by Henry Baehrer at Poppenhusen Triangle at College Place and 12th Avenue, and by this bust in the Institute’s lobby. 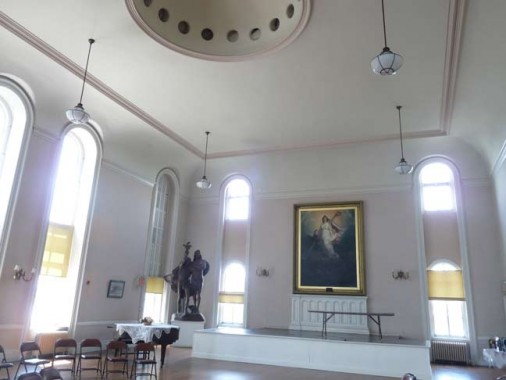 The upstairs main hall contains to artworks of note: “The Triumph of the American Union,” by German immigrant Friedrich Spangenberg, and Hermon Atkins MacNeil’s sculpture “Coming of the White Man.”

The 85 3/4″ x 117 1/2″painting, executed in 1867, celebrates the end of the Civil War and depicts Lady Liberty hovering over the commanding generals of the Union and Confederate armies, General Ulysses S. Grant and General Robert E. Lee. Liberty is veiled with the American flag, holding aloft the victor’s laurel wreath and sword, facing down. She is accompanied by an American eagle.

The institute acquired the work in 1870 and hung in the main hall until 1980, when the building was intended to be sold as well as the artworks. The painting was actually boxed up and disappeared for 4 years. It was located in 1984 and its then-owner donated it back to the Institute.

Friedrich Spangenberg, a German painter, born in Gottingenin 1843, died while ascending Mt.Vesuvius, June 8, 1874. He studied in Munich, and became known by his picture of Genseric, king of the Vandals, leading the empress Eudoxia and her children into captivity after the sack of Rome. In conjunction with the Belgian painter Pauwel he executed at Weimar “The Triumph of the Union,”commemorating the close of the civil war in the United States. While in Rome he painted “A Young Ostrogoth entering into friendly Eolations with Citizens of Rome.” chestofbooks

A closer view is on the Institute’s gallery page. 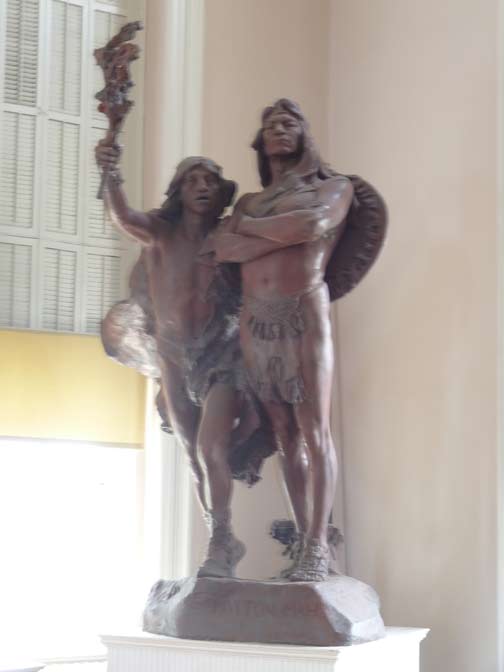 “Coming of the White Man,” by Hermon Atkins MacNeil, was executed in 1904 and is a plaster cast of a sculpture in Portland, Oregon.

Renowned sculptor Hermon Atkins MacNeil has an important place in the history of College Point and in the annals of the Poppenhusen Institute. MacNeil was born in Massachusetts in 1866 and  received his early training at Boston’s Normal Art School. He went on to study in Paris and Rome and held teaching positions at Cornell University, the Art Institute of Chicago, and the Pratt Institute.  His early work included assisting with sculptures on various buildings on the 1893 World’s Columbian Exposition in Chicago.  It was during his time in Chicago that MacNeil developed his interest in depicting Native American subjects, which remained a major theme throughout his career.

When he moved to College Point in 1900, MacNeil had already won attention and several awards for his work but a series of important commissions soon established him as a major American sculptor.  Some of his important works are The Sun Vow (Metropolitan Museum of Art), Coming of the White Man (Portland, Oregon), the McKinley Memorial (Columbus, Ohio), the Soldiers and Sailors Monument (Albany, NY), the Marquette Memorial (Chicago), the Pony Express Rider (St Joseph, Missouri) the figure Washington as Commander-in-Chief of the Army for the Washington Square Arch (NYC), and the pedimental group for the east wing of the United States Supreme Court Building, Washington, D. C.  He also designed the U.S. Liberty Quarter that was minted from 1916 to 1932.

MacNeil had his home and studio at 121-01 Fifth Avenue in College Point, where he remained until his death in 1947.  He sometimes used local residents as models for his designs, and in 1966 Mayor John V. Lindsay renamed College Point’s Chisolm Park in honor of MacNeil.  MacNeil’s commitment to community service included serving on the Board of the Directors of the Poppenhusen from 1913 to 1928.  In 1918, he served as the Board’s vice president and he headed the art department for many years.  He also gave to the Institute a plaster cast of his bronze sculpture Coming of the White Man. The bronze, which was completed in 1904 for a city park in Portland, Oregon, depicts a chief of the Multnomah tribe and his medicine man standing on a large, boulder-like pedestal.  The plaster copy was presented to Institute in the early 1900s when MacNeil was serving as head of the art department.  It stood in the Grand Auditorium until 1980 when the Institute was threatened with sale and demolition, as which time it was sold.  In 2002, the plaster cast was generously donated back to the Institute by Susan Wunderlich and again stands majestically in the Grand Auditorium. Poppenhusen Institute 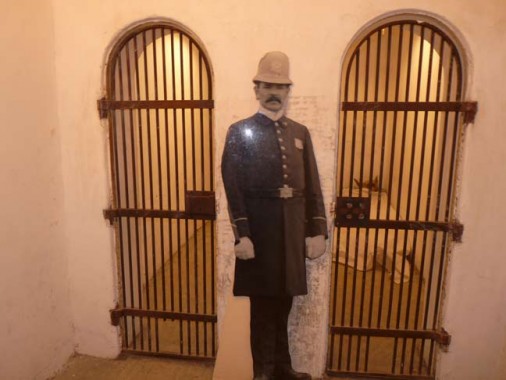 In the basement can still be seen the Institute’s two jail cells, which stood near the sheriff’s office. 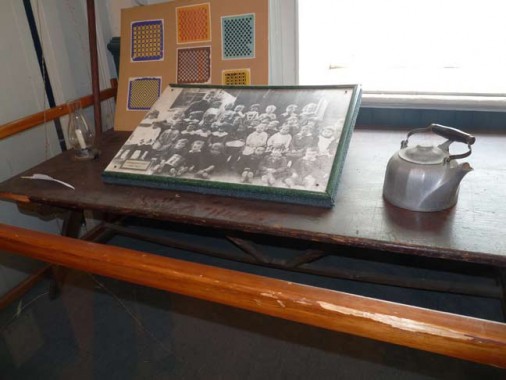 The Institute’s kindegarten is now used as a theatre space and has some original school desks, blackboard and photos of some 19th Century classes. 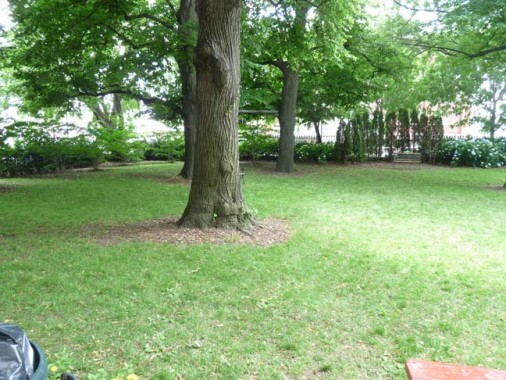 The schoolroom opens onto the Institute’s backyard and concert space. In 2012, the Institute has a full slate of July Sunday summer concerts and events scheduled.

Years ago,1979 to be exact,I walked on a cold november day to that institute,only to find it all boarded up and deserted.A govt. agency had said that a machinists course was taught there
You can well imagine my anger and dissapointment welling up in a torrent of……

I remember attending the Poppenhusen Institute during my teenage years for free Tae Kwon Do and dance lessons, along with an assortment of other activities, all for free or a very low rate. It was a great place for children to get involved in activities they would otherwise be unable to participate in, so it’s sad to see that it is struggling to remain open, but hopefully things will turn around.

I love the place! There is also a theatre group there called the Phoenix Players which perform plays every few weeks or so. I think the loveliest part of the building is the second floor bathroom!

I came across the Institute purely by accident, riding around in College Point, with nothing better to do. The building immediately caught my eye and I was surprised to see that well organized things were happening there. I will definitely be coming to the Oktoberfest!!!

Hi Dee,
I am a College Point resident as well and am interested in the Institute. However, their website does not seem to have any e tries more current than 2012. Are you sure it is still operational?

Can we go come dance to raise money for Far Rockaway

I so long to visit the Institute in an attempt to delve into my ancestors who were very much a part of the Poppenhusen family. (I live in South Carolina and travel back north is not too easy these days) I did visit College Point for a week in 2014 to do research and unfortunately showed up at the Institute on a Thursday, when it was closed. My ancestors include the Hollweg family and the Grell family. Is there a library or a research room or anything of that nature at the Institute? Any information is most appreciated. My best wishes for your continued success. You are a jewel in your community.