ForgottenTour #56 was held Tuesday, July 17th at 6:30 PM. The air was only slightly less cooler than it had been during the day, when it reached 95 degrees, but this year’s string of rain-free ForgottenTours remained intact. Our goal was to visit several sites associated with Peter Stuyvesant, the last and perhaps greatest of all Dutch Director-Generals of the New Netherland colony until the British arrived in 1664 and assumed control. Our route was almost completely within the boundaries of the Stuyvesant farm, which had run between the Bowery and the East River and from 3rd north to 14th Streets.

We had fully 45 highlights on the tour. Here are just a few… 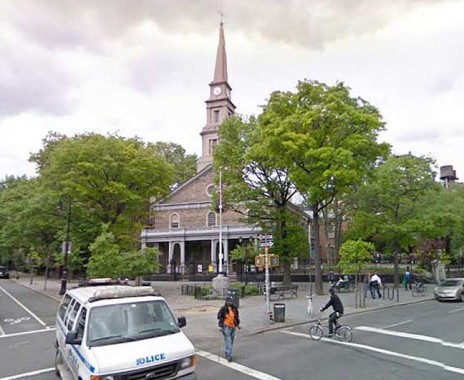 We met at St. Mark’s Church, 2nd Avenue and East 10th Street, located just east of where the Stuyvesant farmhouse had been. It was built in 1799 and is the second oldest church building in the city (the oldest being St. Paul’s Chapel at Broadway and Fulton Streets).  It stands on the chapel site of Peter Stuyvesant’s 17th Century estate (the Director-General is interred in a vault in the churchyard, as his great-grandson sold the property to the Episcopal Church in 1793) and is turned to face Stuyvesant Street, once the driveway to the estate. NYC mayor and diarist Philip Hone and NYS Governor and US Vice President Daniel D. Tompkins are also interred in the churchyard. 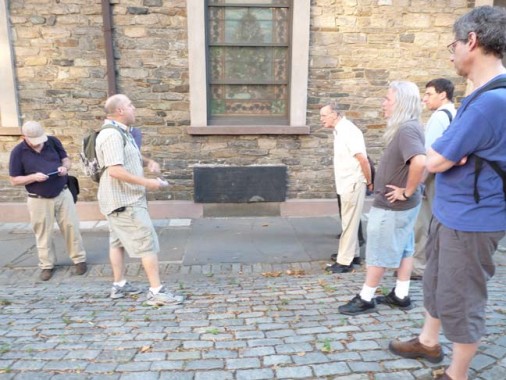 Stuyvesant was interred in the family vault beneath the chapel when he died in 1672.  During the 18th century, the chapel fell into a state of dilapidation, until little remained except the foundation and the Stuyvesant family vault beneath.  In 1793, Stuyvesant’s great-grandson, Peter Stuyvesant IV, donated the chapel property to the Episcopal Church with the stipulation that a new church be erected.  Originally intended to be a chapel of Trinity Parish, St. Mark’s in-the-Bowery was completed in 1799 as the first New York City Episcopal parish separate from Trinity.  The Stuyvesant vault is still present under the east wall of the church; it was closed permanently when the last family member was interred there in 1953. 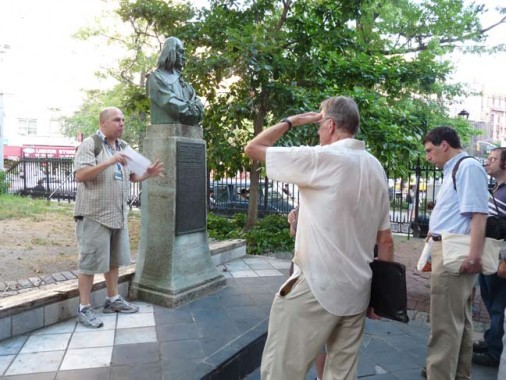 Designed by Dutch sculptor Toon Depuis, this bust of Stuyvesant was presented to St. Mark’s by Queen Wilhelmina of Holland and the Dutch government on December 5, 1915. 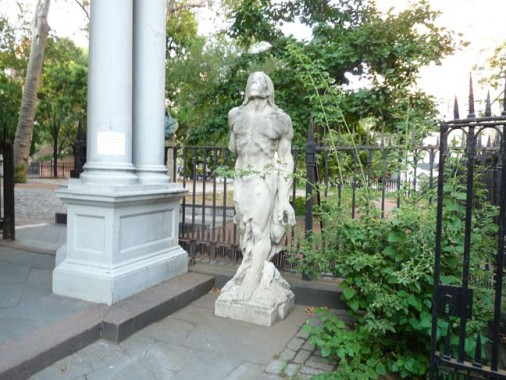 Elsewhere in front of St. Mark’s are two sculptures of Native Americans, “Inspiration” and “Aspiration”  by Solon Borglum, brother of Gutzon Borglum, the sculptor of Mount Rushmore. They were acquired by Rector Norman William Guthrie in the 1920s. Guthrie began St. Marks’ long association with the arts that continues unabated to this day. Two lion sculptures, acquired by Rev. Guthrie in the 1920s, stand guard outside the church doors. The lion is the symbol of St. Mark.

The portico in front of the church was installed in 1858 and is the work of James Bogardus, the early proponent and builder of cast-iron front buildings, many of which are found in southern Manhattan. 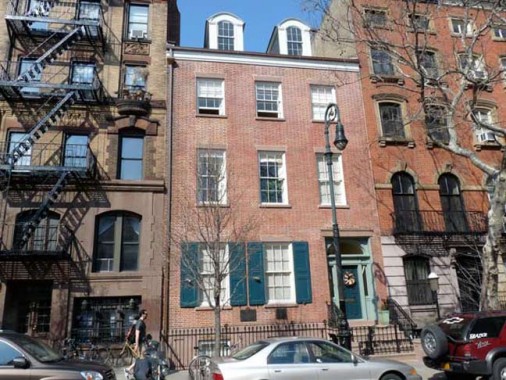 Nicholas Fish-Elizabeth Stuyvesant House, 21 Stuyvesant Street. It was constructed in 1804 by Petrus Stuyvesant, Peter’s great-great-grandson, as a gift for his daughter when she married Revolutionary War hero Nicholas Fish, who served with Washington at Valley Forge and at age 18 is still the youngest Major in US Army history. He was associated with Treasury Secretary Alexander Hamilton and the Marquis de Lafayette, whose military expertise helped win the war. Lafayette visited NYC in 1824 and was entertained in this building.

Nicholas and Elizabeth’s son Hamilton Fish was born here in 1808. He went on to serve as US Senator, Governor of NY State, and US Secretary of State under U.S. Grant. The Fish name has long been prominent in NY State politics.

We moved on past Cooper Union and its widely varied 1859 and 2010 campus buildings and visited East 7th Street, where we found…

McSorleys has been an East 7th Street institution since the Franklin Pierce (or Abraham Lincoln) administrations, depending on whose story you believe.

Though McSorley’s claims it opened here on East 7th Street east of 3rd Avenue in 1854, NYC historian Richard McDermott’s research, employing old insurance maps, census data and tax-assessment records, indicates it opened in 1862. In any case, it’s pretty old. The later opening date would negate claims that Abraham Lincoln stopped in when he gave a speech at Cooper Union in February 1860. There are hundreds of pictures on the walls; customers have brought them in throughout the decades, and the staff usually finds a place for them.

The coal-burning stove is still there, as is the safe, the rack of corncob pipes, and the dust-covered set of turkey wishbones hung on a light fixture. The tradition dates to World War I when soldiers going off to war would hang them there. The ones that came back removed their wishbones. The city recently made McSorley’s remove the dust for sanitary reasons.

McSorley’s famously did not admit female patrons until the summer of 1970. At first the bathrooms were unisex until one of the kitchens was converted. When you go, choose between their light or dark ale, which is served to you in two small mugs per person.

We saw two historic mansions on St. Mark’s Place, the site of the old Fillmore East rock palace on 2nd Avenue and East 6th, some Jim Power lamppost mosaics and the classic neon Block Drugs sign. Then we turned north on 2nd and between St. Mark’s and 9th… 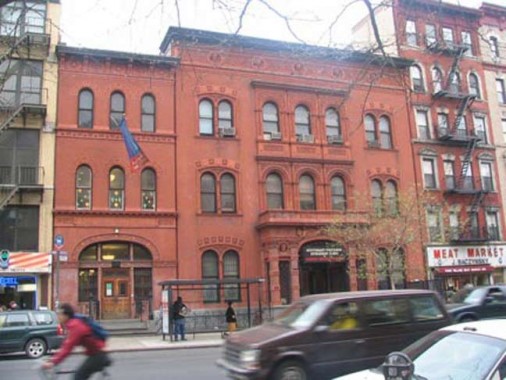 Two deep-red brick buildings on the west side of 2nd north of St. Mark’s Place appear as if they were built at the same time and by the same architect and indeed, both were designed by William Schickel and completed in 1884. The Freie Bibliothek und Lesehalle (Free Library and Reading Room) and next door, the Stuyvesant Polyclinic, are both remnants of Kleindeutschland, the primarily German population that lived in the area in the late 1800s to early 1900s.

The 1904 General Slocum steamboat disaster and later, America’s entry into World War I served to dissolve the clinic’s early German association, however, but the German inscription can still be seen over the library, now the Ottendorfer Branch of the NYPL. The facade of the clinic is festooned with busts depicting both real and mythological physicians and scientists of the classic Greek and Roman eras (such as Aesculapius), and also from the Europe of the 1880s (Anders Celsius). 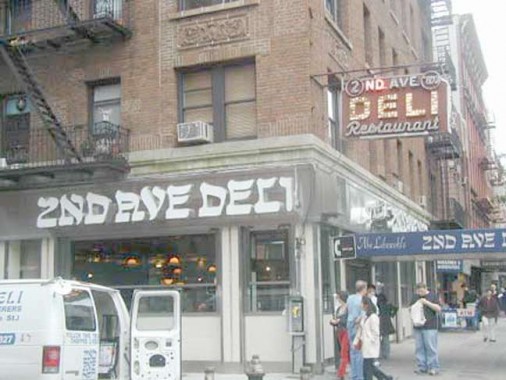 Moving across the street to 2nd Avenue and East 10th, we stopped in front of the bank that was previously occupied by the 2nd Avenue Deli. The Deli, shown above in its heyday, moved uptown to two separate locations after the unsolved murder of its founder, Abe Lebewohl. Two triangles on either side of east 10th and Stuyvesant street are named for him. One remnant of the Deli can be found here still. 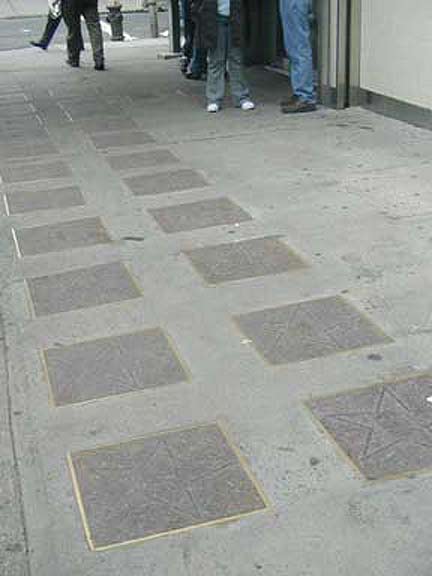 The sidewalk still boasts The Walkway of Yiddish Actors, an homage to the old “Jewish Rialto”, a collection of theaters and entertainment venues on 2nd Avenue, two of which, the Orpheum and the present Village City Cinemas, yet stand. The Walkway was installed in 1984 by deli owner Lebewohl. The names Fyvush Finkel and Molly Picon may be recognizable to American audiences. Fyvush is Yiddish for Philip.

Moving on, we saw the ancient Eye and Ear Infirmary (where your webmaster has had his peepers peeped at), the impossibly tiny Karl Bitter Sculpture Studio at 249 1/2 East 13th, Kiehl’s Drugs and the site of a pear tree planted by Stuyvesant which stood for two centuries at 3rd Avenue and east 13th, until heading east again on East 16th to see the great St. George’s Episcopal Church complex, which includes the massive and medieval-looking St. George Rectory and abuts the Friends (Quakers) Meetinghouse, built in 1860, on Rutherford Place. 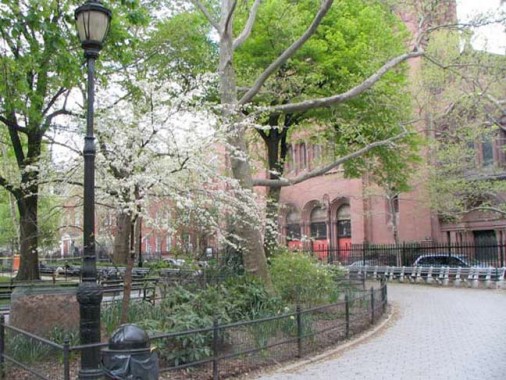 Through the trees in Stuyvesant Square is St. George Episcopal Church. On the west side of the square between East 16th-17th Streets, St. George was first built from 1846-1856 [Otto Blesch, exterior. arch, Leopold Eidlitz, int. ar.] as an early example of Romanesque Revival. The first rector, Stephen Higginson Tyng, was one of the most prominent preachers of his time. The church burned down in 1865 but was rebuilt to match the original; the spires were removed in 1886.

St. George’s parish had been founded in 1749 as a chapel of Trinity Church, and constructed this independent church on land donated by Peter Gerard Stuyvesant.

It’s most New Yorkers’ assumption that Stuyvesant Square was named for the Director General of New Netherland, Peter Stuyvesant, especially since Gertrude Vanderbilt Whitney’s 1941 bronze of Peg Leg Pete is the centerpiece of the park’s western section. However, in 1836, a descendant, Peter Gerard Stuyvesant, the co-founder of the New-York Historical Society, and his wife, Ann Rutherford, decided to “donate” the space, selling it to NYC for $5.00. The square was not to open to the public until 1850–in fact, it took a lawsuit by P.G. Stuyvesant to get the city to stop dragging its feet on development. Stuyvesant Square underwent two large-scale renovations in the 1930s, as part of the Depression-era Works Progress Administration, and again in the 1980s, after decades of the usual neglect.

Finally, the title card shows the heroic Peter Stuyvesant statue donated by the Netherland American Foundation and unveiled in 1941. The bronze statue is by Gertrude Vanderbilt Whitney. Stuyvesant stands on his peg leg — called his ‘silver leg’ because, in real life, it had silver bands. The sculpture was exhibited by the Netherlands Pavilion in the 1939 New York World’s Fair.

Kevin, one of these days I have got to get to one of your walks. This one looked like it was way cool. What an interesting part of town.

It does get me what driveways were used for before the invention of cars. Honestly, that tour was the first time I have ever heard of that. My guess is that they were the carriages and other chariots were kept, because that’s the only thing I can think of. Still, I find out weird to hear about driveways existing in the days of Peter Stuyvesant when this way before any cars existed. Then again, roads were around before them as well, and their purpose has always been for transportation regardless of what was using it be it people, animals, or vehicles, though they were increased in width to help with the car culture when it came.

Molly Picon was my grandmother’s/great aunt’s cousin – I have a lot of sheet music, signed photos, etc. of Molly.

With the research that Kevin and Rich do, every tour is a treasure. And these tours attract a really diverse group of history buffs so nearly everyone has a little story of their own contribute along the way.

I LOVE READING THIS! I was born in 1951 at what was Manhattan General Hospital at the northern edge of Stuyvesant Square at Second Avenue; it has since been absorbed by Beth Israel Medical Center. I also recall being part of the Boy Scout troop that was based at St. Marks-in-the-Bowery church during the 1960’s. We even held “drill” in the graveyard, sometimes atop Peter Stuyvesant’s tomb; we met weekly in the parsonage which is on the property.

The “Fillmore East” site was originally “Loew’s Commodore”, where I saw many films during my childhood. I even attended an Iron Butterfly concert with my brother during the “Fillmore’s” heyday.

KEEP UP THE GOOD WORK!