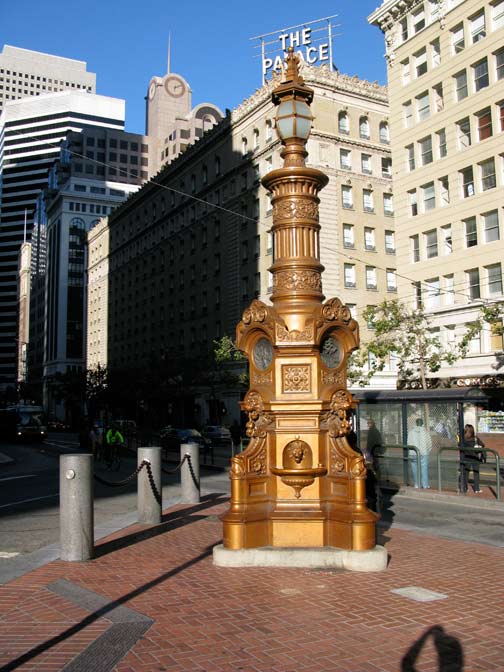 One of the most beloved artifacts in downtown San Francisco is at Market Street where it meets Kearny and Third Streets, where the city’s oldest public monument, Lotta’s Fountain, can be found.

Lotta Crabtree (1847-1924) was a popular singer/actress who began her career in San Fran as a child in the 1850s, her father John having come to the Bay Area during the gold rush. During the 1860s, she migrated to the east coast where she appeared in plays such as The Old Curiosity Shoppe and Uncle Tom’s Cabin, often taking on roles as children due to her diminutive size. She became the highest-paid actress in the country, earning $5,000 per week, and retired in her forties after suffering a fall. Though she was beloved in San Francisco, she spent the last 15 years of her life in Boston and is buried in Woodlawn Cemetery in the Bronx. She had never married. While still 22, she began buying up area real estate and had accumulated a fortune of $4 million by the time of her death in 1924. 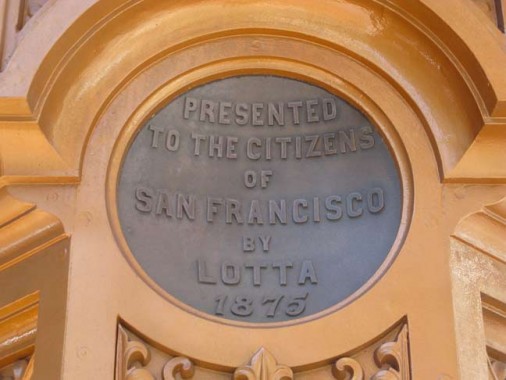 Lotta donated this fountain, built to resemble a lighthouse in a play she was appearing in, in 1875. At the dedication ceremony, tanked-up celebrants started a riot that soldiers were called in to quell. 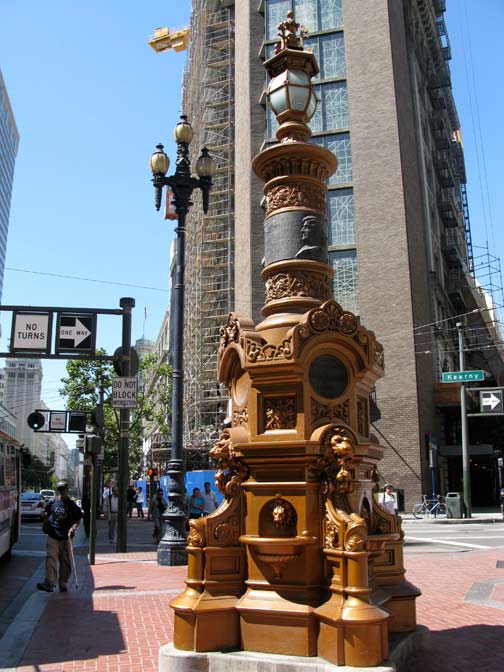 Lotta’s Fountain survived the 1906 Earthquake and beginning in 1924, the year of Lotta’s death, it became the setting for a ceremony commemorating its anniversary and mourning its casualties. 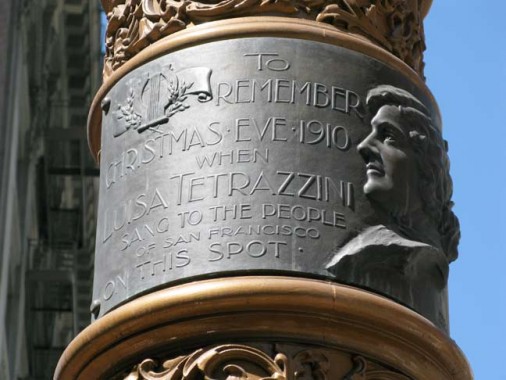 Affixed to the shaft is a plaque that recalls opera singer Luisa Tetrazzini‘s 12/24/1910 appearance for a free concert at the fountain, which no longer dispenses water. 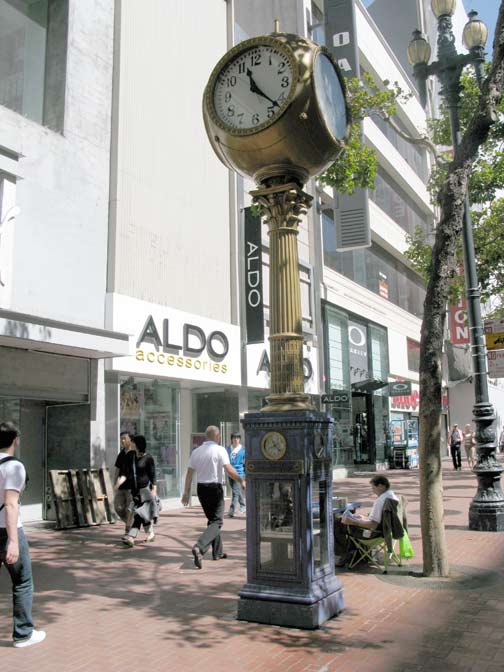 A short walk down Market Street on its west side between Fourth and Fifth Streets, and you will encounter the Albert S. Samuels Clock, which its plaque explains is “one of the finest street clocks in America.” Samuels, a watchmaker, moved his business into the then-new Lincoln Building (897 Market) in 1909, and his clock was built there in 1915, the year of the Panama-Pacific International Exposition. 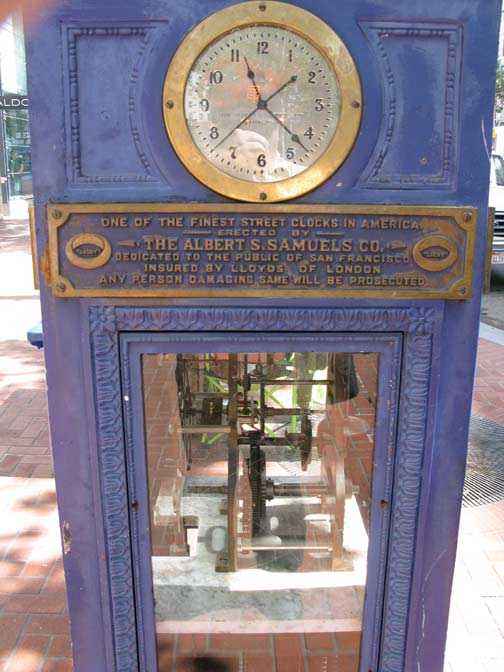 Engineer Joseph Mayer of Seattle built the clock with glass panels in the base that allow passersby to see the clockworks. Samuels moved to 856 Market in 1943 and took the clock with him to the new location. Samuels died in 1973, and the clock fell into disrepair and was displaced by construction for some years. It was restored to service in 2000.

A little more on Lotta’s Fountain …

Although the fountain is at its original hieght today, between about 1915 and 1999, the shaft was lengthened by four more bands to more closely match the height of the newly installed “Path of Gold” Streetlights on Market Street. Those were originally single fixture poles appearing around 1907; the bases and shafts received the familiar triple light fixtures as an upgrade for the 1915 Panama-Pacific Exhibition.

The fountain was in wretched shape by the late 1990s, so a total renovation was completed in 1999. That renovation included the removal of the extra bands in the shaft that were installed in 1915. I remember that the water feature had been restored in the renovation, but never saw it working except for one visit right around the time the renovated monument was unveiled.

The light at the top burns a fairly cool lamp–warmer than Mercury, but cooler than Incandescent. If I were to hazard a guess, I think a fluorescent twisty bulb might be in there these days. Old photos also show a pair of large acorn fixtures mounted in a downbridge fashion on either side of the top light. Not sure when those disappeared, but they were long gone by the time of the 1999 restoration.

Great stuff. Anywhere else have info on San Fran’s streetlamps, esp the ones with the gold rush scenes on the bases?

Unfortunately, the SF Streetlights are not well documented. Most of the information I’ve got is from personal observations, and one book about SF Architecture “Splendid Survivors”, Copyright 1979 by the Foundation for San Francisco’s Architectural Heritage. Long out-of-print, I bought this book in the SF Macy’s Cellar, which used to have a pretty good book department, and a great “Local Interest” section.

A couple of tweaks on my comment above–the Market Street poles were installed in 1908, and did not get their triple-lights until 1917, after the Panama-Pacific Exposition had already closed. The extension to the Lotta’s fountain shaft did happen in 1915.

Just saw a short movie about Lotta Crabtree, whom I’d not heard of previously. An immediate, quick search for information about her life and fountain led me to your site. How absolutely wonderful that you’ve retained this history. Greatly appreciate your in-depth knowledge about the fountain and lights on Market Street. Thank you for providing a quality site and such detailed information.