While meandering down 1st Avenue, between East Houston and East 14th Streets recently, I was struck by the large number of small hole-in-the wall businesses and the handmade or old-fashioned signs that accompany them. Time for a quickie Signs page to show them to you. 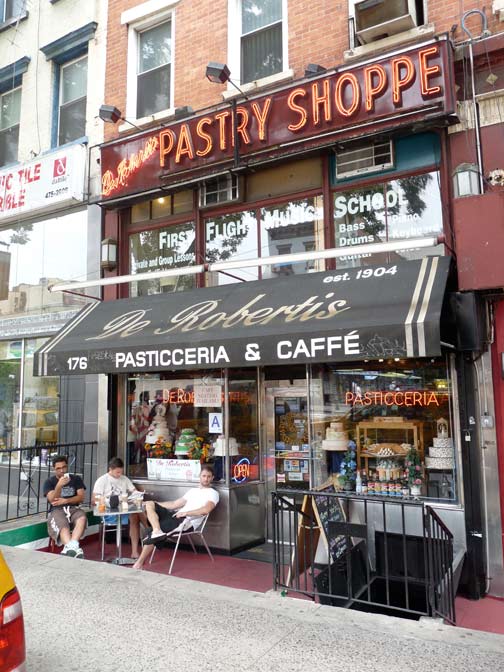 DeRobertis Pastry Shop/Pasticceria between East 10th and 11th boasts a vintage neon sign, and has been in business since 1904. Scenes from Stanley Kubrick’s last feature, Eyes Wide Shut, were filmed here. It has been a mafia stronghold in the past, but we don’t need to expand on that here. 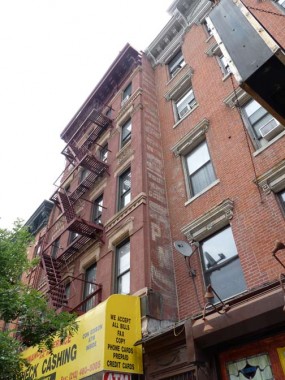 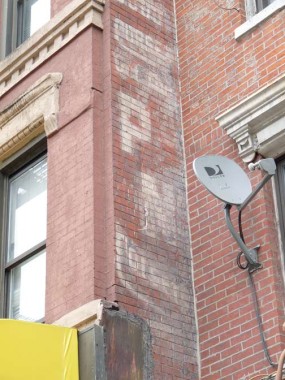 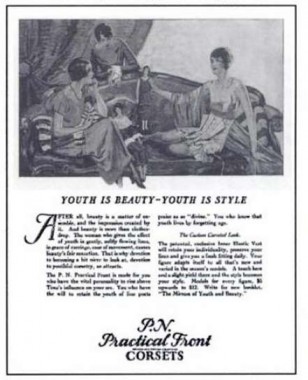 Another ex-mafia stronghold on the same block, Lanza’s, is in a building that sits a couple of feet in back of its neighboring building, and this presented an opportunity for signpainters hired by PN Practical Front Corsets to do a vertical ad in the space. From the florid lettering, it’s likely from 1910 or earlier. The lower part of the sign says, “You Want A Good Corset? Get a PN Corset.” I don’t know much about the history of PN Corsets, but their ads were frequent in the ladies’ magazines through at least the early 1950s.

As for the figure-enhancing contraptions, they have been out of style for awhile, but model/pinup girl Dita Von Teese has been trying to bring them back. 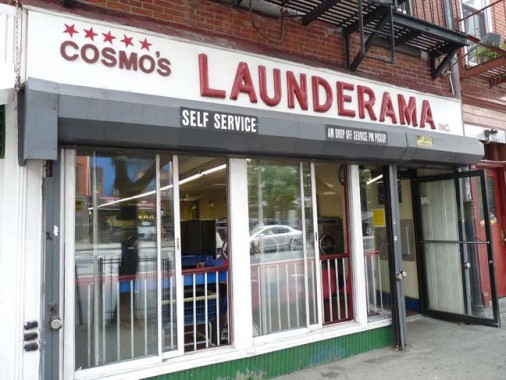 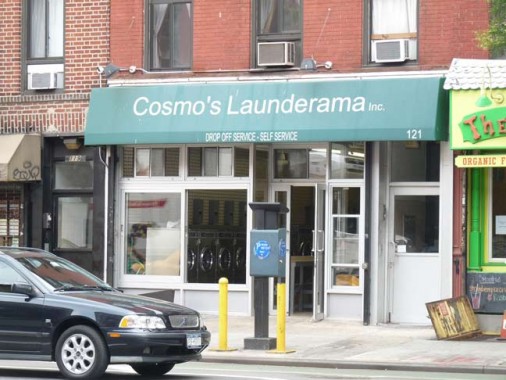 The original Cosmo’s Launderama was so popular with its 1950s plastic-lettered sign apparently proved so popular, another branch opened across 1st Avenue. It’s a good bet that it was renamed Cosmo’s after a nearby location was proven to be the Nexus of the Universe. 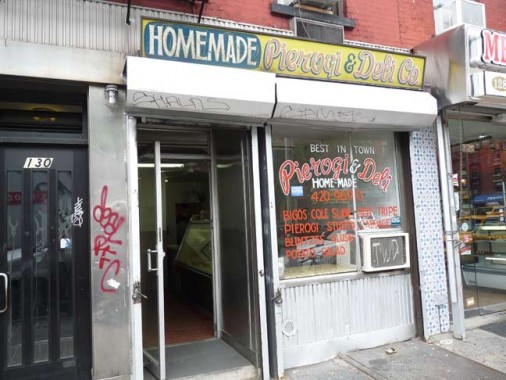 A small deli’s hand-drawn sign advertises homemade pierogis. Most cultures hve their dumpling traditions — Asians have their wontons, Italians ravioli, and Poles pierogis — all pretty much the same thing, though they have different stuffings and are served in different settings. 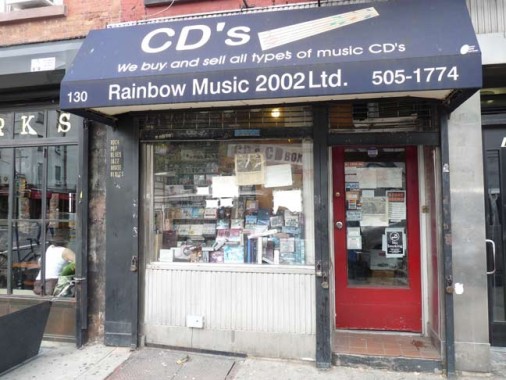 Most major record stores have folded their tents in the age of downloading — my former staples Virgin and Tower have disappeared. The banner is still carried by small indie and mom and pops like this one.

How many Forgotten Fans still regularly buy CDs or even LP’s? 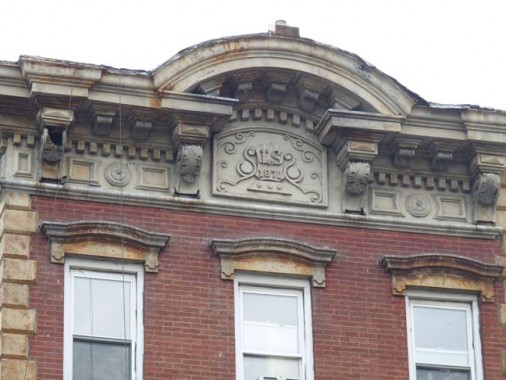 Buildings of a certain age — over a century of a certain age — sometimes list the date of construction on their pediments, as well as the initials or even the full names of the builder or original owner, such as this one, LS or IS 1871, on the NE corner of 1st Avenue and St. Mark’s Place. 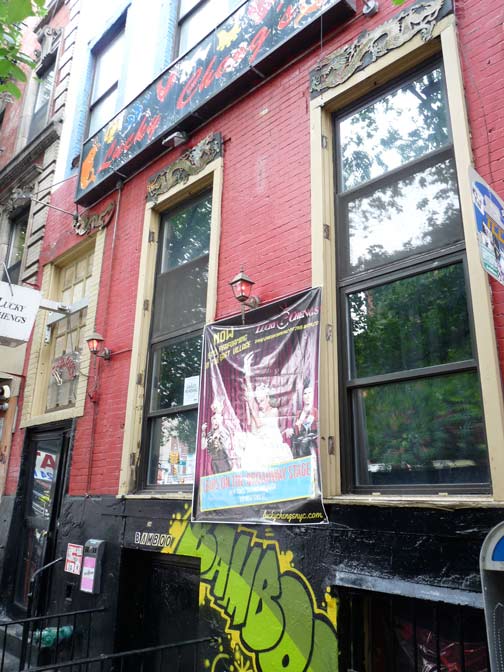 Lucky Cheng’s, between East 1st and 2nd Street, is an Asian restaurant with waiters in full drag. Only in NY, kids, as Cindy Adams would say! And Coyote Ugly is a few blocks away.

I am also looking for pictures of my grandfather’s jewelry store. He lived on Third Ave. Have you had any luck finding photos of businesses from that time period? Thanks, Cyndy Marino Dancynn22 at yahoo dot com

my grandfather Pasquale Prencipe worked at Herman Guarini’s Pharmacy at 180 first avenue. I have their liquor license from 1917-18. Found old photos of the area on the NY Public Library website. You might look there. If you have more information about that time and place, I would appreciate it.

“How many Forgotten Fans still regularly buy CDs or even LP’s?”

It’s hard to say that I buy obsolete music formats regularly, but I don’t download regularly either. I’m out in the hell on Earth that’s called the Sun Belt, where nothing survives that’s more that 5 years old, so I generally have to go on-line and deal with hyper-inflated prices to get what I’m looking for in this regard.

That having been said, I still buy CDs, vinyl, and even reel tapes. I’ve got a Quad (the brand, not the format) 67 CD player, a later-model Tandberg reel deck that I recently got overhauled, and I bought a pretty decent new turntable recently because I was getting tired of fiddling with my ancient (Dad bought it new in ’66) Thorens to keep it alive – the center bearing’s pitted & the ancient Grace arm needs a rewiring bad – good luck with that. I’ve got two huge racks of cassettes, mostly homemade compilations and radio concerts from the 70s and 80s, and a 30-year old Nakamichi deck that plays them very well, but I generally don’t buy cassettes, either pre-recorded or blank, anymore for obvious reasons (they develop drop-outs too easily) – the exception was Flat Duo Jets first cassette-only album and earlier cassette-only stuff by the Cleaners From Venus, but that was just to digitize them in order to preserve them for the ages. For that purpose I’ve also got a Yamaha 1000 hard drive/CD recorder, so I can record analog sources to the thing’s internal hard drive then edit the data on-board and burn it to CD-R – pretty cool unit.

If I REALLY like something I hear, I buy either vinyl or the CD. I’ve always dug reading the notes and checking out the artwork like I did when I was younger and listened to everything, including Uriah Heep, through real headphones – oh yeah, I still have those. A set of vintage-70s Superex pro phones (in Avocado Green, of course) and a Sennheiser pair from the 90s that have some sort of “surround sound” controller in the cable that does something; I don’t know that it can really be called surround, but it sounds pretty … uh, groovy.

I dunno, but I guess I find it kind of discouraging that music’s no longer treated like an artform – it’s just another commodity to a lot of people, as disposable as a Starbuck’s cup. **Sigh**

I know the Cleaners from Venus, with the ‘Greatest Living Englishman’ I know Uriah Heep ‘Easy Livin’ too.

Actually, I’m not surprised you know of the Cleaners. You have a great appreciation for obscure esoterica, which is why I like your site so much – even though I haven’t been to NYC since my parents took me to the Fair in ’64! Brilliant job, Kevin – it is much appreciated.

They don’t call me Old Skool for nothing. I have a respectable vinyl collection that I will only occasionally add to. The CD’s are another matter. This part of the collection is always in a state of flux. If I hear someone I find interesting or have seen in concert I will add them to it. I am primarily a jazzer but have large enough ears that I can listen to practically anything. Listening to just one type of music would bore the crap out of me. As Mr. Ellington once put it there are only two types of music, the good kind and the other kind.
If the other kind is increasibly disposable it is also evident that quality will win out. Thus the continued interest in Jim Morrison, Janis Joplin and other touchstones of sixties music. Miles and Trane are as popular as they ever were. Thirty years from now will Lady Gaga be as popular as Stevie Nicks still is.
RIP Jon Lord.

Re; DiRobertis – According to IMDB and the DVD commentary, all of Eyes Wide Shut was filmed in England on a set. Kubrick had a highly detailed set built at Pinewood, including streets and shops, but no footage was shot in NYC.

I sold my last record player, and gave away my last 45’s, 10 years ago. I’ve downloaded an entirely new music collection from Napster and WinMx for free with much higher fidelity. I don’t even have to burn a CD, just load the MP3’s onto a USB drive and plug it into the player. Times have changed, and so have music formats…