I have always been a big fan of inter-building bridges, by which I mean bridges that connect two buildings without accessing the ground, even though I have not had the privilege of actually traversing any except one: it was a pedestrian bridge that connected the World Trade Center with the World Financial Center over West Street, and, of course, that one was destroyed by terrorism in 2001.

But I am not a fan of just any inter-building bridge. It has to be old, ornate, and look as though great thought has been put into its construction. There are only a few of those remaining around town. 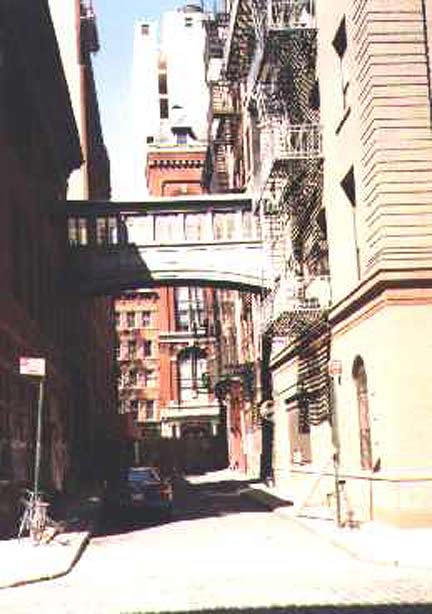 One such bridge is in an unlikely location: a two-block long alley called Staple Street in Tribeca. It was built uncounted eons ago to connect what was then New York Hospital to an annex across the alley.

And, there is another one in midtown Manhattan. It’s so high up that you might not notice it if you are hustling to a train at Penn Station one block away. 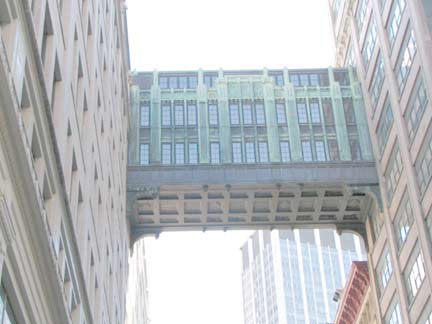 This bridge over East 32nd Street between 6th and 7th Avenues can almost be called a small building in its own right– it’s 3 stories tall. 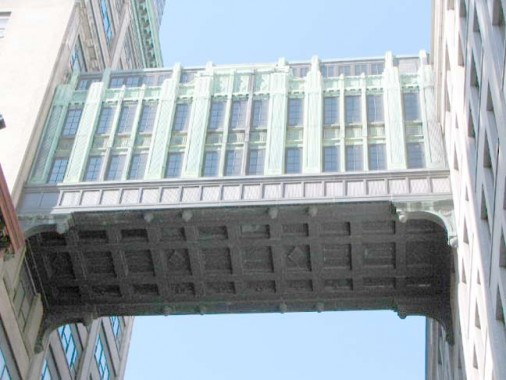 It has retained an almost Beaux Arts aura, even though it came along at the very beginnings of Art Deco. Possibly the two buildings it connects were more ornamented at one time. 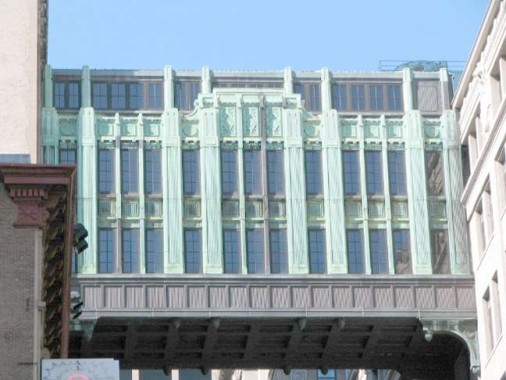 Over 8 decades the copper cladding is magnificently greened and verdigris’ed. 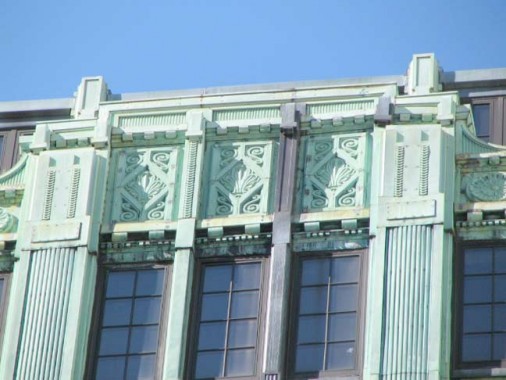 Filigree and decoration like this would be deemed unnecessary, ostentatious and needlessly expensive in ensuing decades. Since 1925, when the overpass was built, inter-building bridges have gotten ever more utilitarian and boring.

But, when Gimbels’ Department Store, Macy’s great rival, decided to bridge West 32nd Street at its 6th Avenue flagship, they hired the Shreve and Lamb architectural firm. A few years later, the same firm designed the Empire State, the King of All Buildings.

I still don’t know what it looks like inside the bridge itself, but it must be something special.

Update 6/18/14: Wonder no more…the Bowery Boys have photos from the inside.

Kevin, another one you might want to check out, in a most unexpected location: Maimonides (not sure of spelling) Hospital in Borough Park has a bridge connecting its two main buildings across a Brooklyn avenue (I think it’s either 9th or 10th Avenue).

The pedestrian bridge above Fort Greene Place that connects Atlantic Terminal and Atlantic Center is open to the public. Of course, it’s not the least bit old or ornate.

What a coincidence! I was just watching this video earlier today (http://youtu.be/fK7i-7tK08E?t=3m36s) and at one point they go inside the bridge, or at least the hallway to the bridge. I wasn’t quite sure when watching that video, but you get to see parts of it.

Yes, I have heard of their skywalks

Unfortunately their skywalks are all modern and boring (1970s and newer) from what I saw when I was last in Minneapolis. Some nice old building here and there on the edges of downtown though.

I think Minneapolis was a victim of that 1970s and 80s rush to tear down the old which left few older buildings in the actual downtown area. At least they kept some of the old mill buildings. Nice city.

There is a great series that started with the Lost Twin CIties by Larry Millett that is all about the destruction in Minnepolis and St. Paul.

I think they “used” the Gimbel’s bridge in a CSI: NY episode, season 7, episode 16. They discovered a victim who they determined was squatting in what was a sky bridge of an abandoned department store. If not actually used, I think the exterior shots were of this bridge.

It’s too bad that NYC doesn’t have a lot these bridges. The only other bridge that I know in Manhattan that connects buildings is the one at Hunter College, though there was a viaduct that connected the original 7 WTC to the rest of the complex before 9/11. Still, they do give very nice views of the area when you walk in them.

There is also one in the Atlantis Hotel in the Bahamas that is used as a Suite. Rumored to cost over $25,000 a Night

There used to be two bridges coming out of the Gimbel’s buidling — the other was a much lower one (Second floor) across 33rd Street that connected that store with Sacks’ 34th Street, which the Gimble Brothers had acquired after the main Sacks store moved to its now-famous Fifth Avenue location.

Many years ago when I was a wee tad we lived in western Pennsylvania and on our sojurnes to the big city-Pittsburgh- I wasentranced by such a bridge overa buisy street between two large buildings. My father told me that on the right eas the county court and on the left the county jail.
The name applied to the structure was ” The Bridge of Sighs” how many others share such an appropriate name?

Quite a few, the most famous is in Venice, Italy.
http://en.wikipedia.org/wiki/Bridge_of_Sighs

Hi Kevin I was shocked and amazed to this pedestrian bridge again. My father owned a coffee shop on 32nd. Street across the street from Gimbels and up the block from the “new” Madison Square Garden. This was back in 1965-69. On Saturday every week I went to work with my father and used that “walkway” (how we referred to the pedestrian bridge) all the time to deliver the outgoing orders to the offices in Gimbels. No food was allowed to be delivered to the selling floors at anytime. As a kid the walkway was really cool because of it’s unique view down to the street, and view of Madison Square Garden. Thanks for the wonderful memories!

Kevin, the bridge over West Street still stands, connecting One WFC to…well, to the other side of West Street. It’s the last solid piece of the WTC to exist.

There’s also a pedestrian bridge on W15, btw 9th and 10th and obviously can be viewed from High Line Park.

I would love to see the inside and walk across too…

there was one of these connecting bloomingdales to their credit offices in the 80s when i worked there.

The Bloomingdale’s Flagship bridge still exists but is shut down. It will most likely be torn down by 2019. Very sad to see these things destroyed. It was closed up in 2015 when they sold the 155 Building, that housed their corporate offices, to an Asian developer. Corporate moved to 919 3rd Ave and the bridge was boarded up and walled off.

I freelance occasionally at Bloomies offices on 919 3rd

There’s a bridge between 115 Broadway and it’s twin to the south. It is a real bridge in the sense that it is not enclosed. It goes between the unoccupied top floors of each building where the elevators do not reach (and hence, can’t be rented in this modern age), and may have been meant as a means of egress.

I feel like a few years ago I saw an article in the Times real estate section about an apartment for sale somewhere (on the UES maybe?) that had square footage on both sides of a skybridge. A truly unique space. I’ve searched for the article but can’t for the life of me find it. Am I on crack or does anyone else remember this?

I’m a little late to the posting of this, but Abraham and Strauss had a wonderful pedestrian bridge between the parking garage and I think, the seventh floor of the store. I think it was over Hoyt Street.

Interior photos of the Gimbels bridge were just posted: http://gothamist.com/2014/06/23/photo_inside_the_gorgeous_gimbels_t.php