The City began to reproduce old castiron lamppost forms during the 1980s, and they’ve generally followed those designs, which appeared as early as the 1890s in some cases, very, very closely. However, one detail has eluded them.

All castiron posts — Bishop Crooks, the Twins used on 5th Avenue, other main streets, and parkways — and long-armed Corvingtons, the type seen here, employed a short mast that held smaller lights that indicated that a fire alarm was close by. At first, they were spherical and red-tinted clear glass; then, still spherical, but orange-colored plastic; and lastly, a silo-shaped orange plastic cylinder, used until a few years ago. 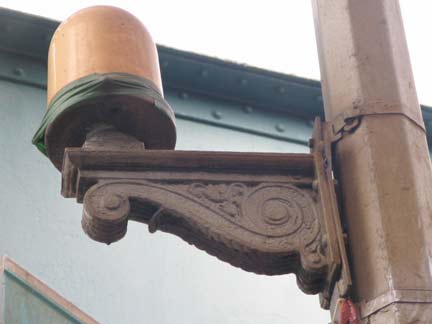 This is an example of one of those short masts that has luckily survived on 13th Avenue and 60th Street in Bensonhurst. As you can see there’s some architectural flourishes that match those on the former castiron lamps.

Therein lies my beef. The new retro versions of the castiron designs failed to include this detail — just the modern-day plain curved pipe was used, instead.

Tis a shame. In any case the short masts and cylindrical orange lamps are no longer used, as a small red light mounted somewhere on the lampposts have replaced them — and if they’re too close to the main luminaire, they’re rendered invisible!