In 1992 I had a short-lived job at a print shop on Greenwich Street in the far West Village. I would take the train to West 4th and make my way southwest in the maze of Village streets to Greenwich between Charlton and Spring. As it happens there was once street that was the most convenient and I would use it more than any other street: Downing.

It’s one of the Village’s obscurer routes. It’s not in the Historic District so there’s not much online about it — if a street is in a Landmarked district, the city posts PDFs describing every building on every street in the district.

But the wisdom of Yogi is pervasive. “You can observe a lot by watching.” And, a cursory look at Downing Street will reveal much. You will note, in the title card above, that Downing Street is narrow even by Village standards. 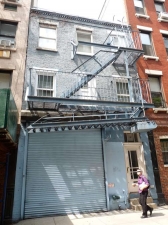 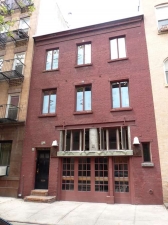 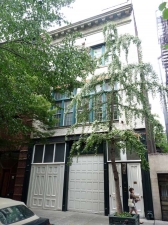 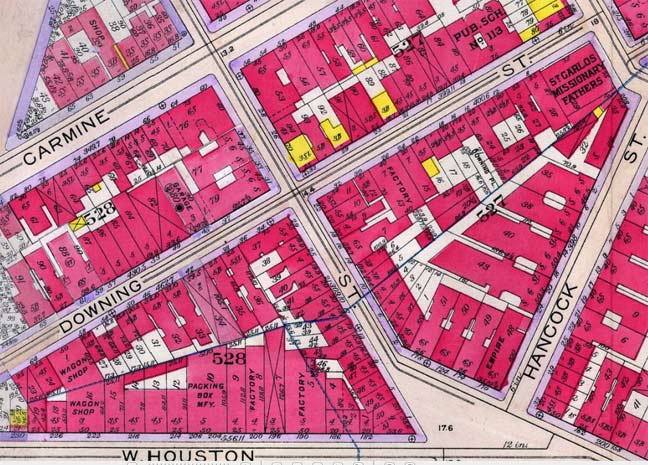 On this 1909 Bromley atlas plate of Downing Street notice several dwellings lining the street that are marked with X’s. In the legend, an X means a stable or garage. Thus we can determine that Downing Street once served in large part as a place to stable horses. Carmine Street, one block north, is quite wide and Downing Street likely served the businesses and homes there.

On the right side of the map is a street that no longer exists; Hancock Street was absorbed by 6th Avenue when it was extended south when the IND subway was built along it in 1928. 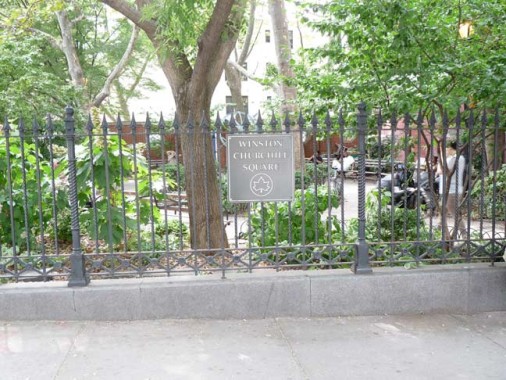 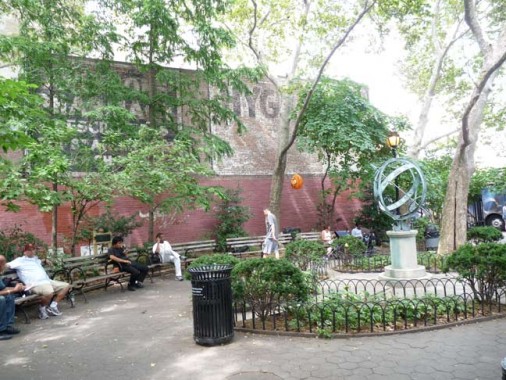 The construction of 6th Avenue created some odd-shaped spaces. Churchill Square, named for British Prime Minister Winston Churchill (his mother Jennie was born in Brooklyn, and his grandfather Leonard Jerome was a successful stock speculator, railroad builder and sportsman who built the Jerome Park Racetrack, later Jerome Park Reservoir, and was the namesake of The Bronx’ Jerome Avenue). 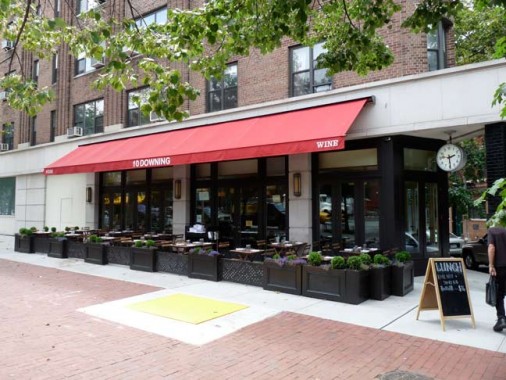 (Now closed) 10 Downing, a winery actually on 6th Avenue at the corner of Downing. The naming of Manhattan’s Downing Street has been speculated about by historians for many years. Some say both Bedford and Downing Streets are named for the ones in London, England, but those streets don’t intersect, though they are both in the Trafalgar Square area.

London’s Downing Street, where #10 is the Prime Minister’s residence (hence Churchill Square) was named for Sir George Downing, who changed political affiliations like the rest of us change shirts. He was one of Harvard’s first nine graduates in 1642. He returned to England and joined up with Oliver Cromwell in his overthrow of the Crown, becoming minister to the Hague and France. After Cromwell’s death he joined the Royalists, and Charles II returned him to the Hague, representing England again; along the way he betrayed a friend who was a colonel in Cromwell’s forces, sending him to the executioner.

Downing was Britain’s envoy to the Netherlands in 1674 when “New Orange” or New Amsterdam was handed over to the British (this time for good) in exchange for Surinam. A tenuous connection, but perhaps a real one. [Information from The Street Book by Henry Moscow, 1978 Hagstrom] 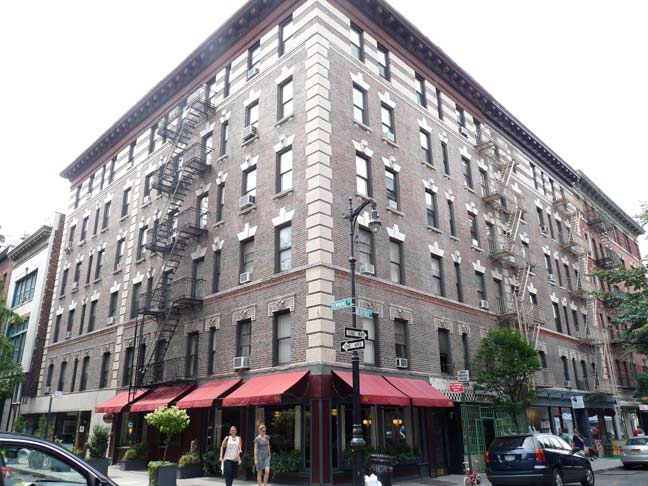 6-story apartment building on the NE corner of Bedford and Downing Streets. 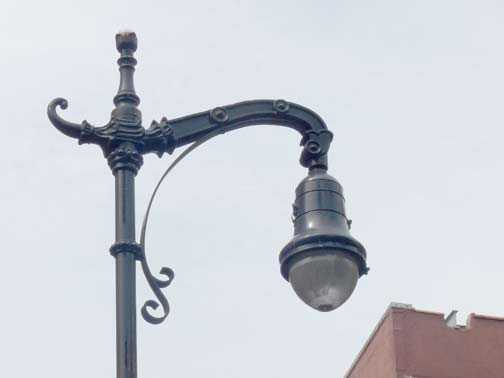 The City has installed retro versions of Type F lampposts, which, in smaller versions, once lit most of Manhattan’s side streets. These new versions are taller with bases that match the heavier, long-armed Corvingtons. 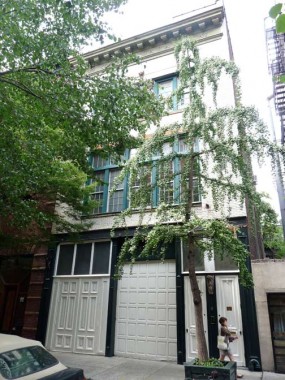 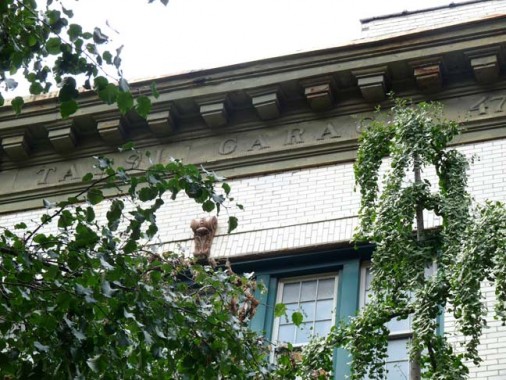 #45’s statues as a former garage, and likely a stable earlier, is confirmed by the words “Tassi Garage” found just under the roofline. 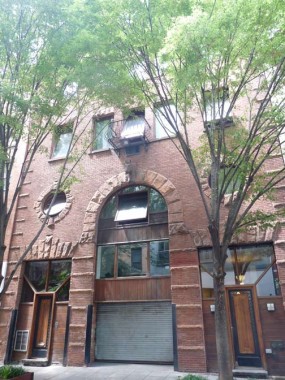 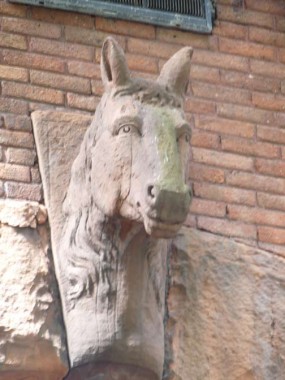 There was a time, in the 1960s, when the western section of Downing Street between Bedford and Varick was in the crosshairs of Robert Moses, who wanted to build Verrazano Street between the intersection of W. Houston and 6th Avenues west to Varick in order to accept traffic from the wide and busy Houston. This would have meant a lot of demolitions.

Verrazano St. would also have been a feeder road toward the propsed Lower Manhattan Expressway. The project actually got under way in 1962 when the city began buying property and condemning buildings along the proposed route. However, LOMEX was eventually killed by community opposition, and so was Verrazano Street.

In your second photo of Churchill Square, there appears to be some advertising signage on the walls hidden behind the trees. Did you get any pix of that? Do you know what they say?

Yes, those are ancient ads for Hygrade Franks and Avignon Pharmacy. I think Frank Jump discusses them at length.

Cool post on Downing Street. I’ve been a resident there for the past four years and watch its transformation with the addition of the large medical center, the three townhomes that were built on a vacant lot adjacent to 10 Downing, and La Camelia (which took over a long vacant retail location), and now the addition of the brewery that is taking over the garage.

One thing – Downing St. is absolutely in a historic district. It is part of the Greenwich Village Extension II district that was designated in 2010.

I believe the building shown at the corner of Bedford and Downing is the “Friends” residence.

The friends residence was Bedford and Grove.

The north curb of W. Houston St. across Hancock St. to Bedford St. marks a street which appeared on many commercial maps about 50 years ago, but which never existed – Verazzano St.

From September 1981 to October 1989 or 1990, I owned & operated a carpentry/ general conrtractor
shop @ 35, 37 Downing Street, on the corner east of my office, was a Bodega, named Julio & Ramons,
on the other side was an Italian social Club named The Village Forty Club, next to the club was a narrow
space that had been rented to the Hot Dog Wagon concession folks , who pushed them out early in the day & returned early evening. I eventually rented the space for storage. Next to that space, which you have pictured belonged to an artist/sculptor Stan Landsman, and next to him heading west was another building you have pictured, which was owned & developed, by Architect Errol Beinstock. Many of the tenements on both sides of the street were owned by the city, and were sold to the tenants. During that period the Printing Trade still resided on Varick Street ( 7 Avenue south ) and at lunch, many of the workers would pass by to grab a sandwich & beverage at the Bodega. The building was sold to French Nationals, who visited one day & let me know in no uncertain terms that my rent would be tripled. Several months later, I moved out of the shop. I have only fond memories of all the locals, and my neighbors, but the street was becoming gentrified, which clashed with the 3 & 4 generation families who grew up & lived there, their entire lives. My shop was Village Contracting & Construction Co. Inc,
& myself 2nd generation Italian, was welcomed & well liked in the “neighborhood”.

Hi Nick,
Just surfing and came across your entry. Thanks for the attribution. It has been a long time. Hope you are well.

I love what you guys are usually up too. Such clever work and reporting! Keep up the terrific works guys I’ve included you guys to blogroll.

Just moved from San Francisco to New York. I feel like the luckiest person in the City. I live in one of the large downing houses that definitely was a stable and I beleive a brewery. It would be fantastic to learn more about the place. Please send any ideas regarding how to research its history. JN

I lived in a loft at 53 Downing Street for 30 years. I loved living there – it was so convenient – I could walk anywhere. I taught singing and the location was perfect for my classes and lessons. I even held concerts and workshops there, and had a three hundred year old barn loom set up as well. I lived in the back, and it felt like living in an old country cottage – but when I stepped outside, I was in the center of the world! Life was good. But then, my greedy, evil landlords, Dean Britton and Anand Gajjar, forced me out because they had hoped to sell the building, which they had bought a few years earlier for $650,000, for $8,000,000, and as a rent protected tenant, I was the single thorn in their side. I moved to the Lower East Side, which I hate, and have been unhappy ever since. Even though the original tenants of Italian American native villagers together with artists and musicians are long gone and replaced with disgusting yuppies, I still lament no longer living on my beloved Downing Street.

And I’d say the happiest years of my life were living in a double sized apartment at 25 Downing. The lot across the street (now sleek but ugly condos) was completely treed and filled with mischievous show off squirrels. I felt as if I lived in a treehouse. My beautiful beloved Italian neighbors, Gus Felugo, Millie Trovato, Mr. Dido, Isabel Natale are gone now but some of our dear neighbors remain — Vilma and Gigi, Rosetta and John, Palma and Oriano and others. Just writing their names makes me long for my lost city. How grateful I am to have lived there when I did.

I grew up at 44 Downing from 1948 to 1968. My grandfather was the janitor and got my parents Apt 2B when they married in 1946. 4 rooms, no closets and the bathtub in the kitchen. My parents paid $37.50 a month rent. It was a very Italian area of the village. One of my friends that I grew up with still lives at 32 Downing in his childhood apartment.

One thing I’d really like to say is that before purchasing more personal website memory, take a look at the machine within which it would be installed. Should the machine is usually running Windows XP, for instance, the memory limit is 3.25GB. Installing above this would basically constitute just a waste. Make sure that one’s motherboard can handle the actual upgrade quantity, as well. Interesting blog post.

My grandmother Ida Ravani lived at 8 Downing St in 1925. Saw the address on her marriage certificate which I just received from NYC Vital Statistics. She then moved to Red Bank, NJ when she got married since that is where my grandfather lived.

Just found the address of 40 Doening st & googled it to find your article. 1020 census has my Great g-ma’s fam living there, I think its them anyway. Other addresses from the census data has family all around the Washington Sq area.

MY brother and I also grew up at 44 Downing Street from 1947 to 1962 as well as my cousin Paul. We lived on the fourth floor he lived on the 3rd floor. Our apartments were identical, 2 bedrooms ,kitchen and living room. One bathroom and the bathtub was in the kitchen. The reason we left was when New York City bought the building for the development of the Manhattan Expressway which never occurred. I also wanted to add that when Mr. Mazzocchi was the janitor during that period the building was always kept in immaculate condition at all times. It a was great building. I don’t recall what our parent paid , it was rent controlled.