Despite the protests of congregants, preservationists and neighbors, the Bay Ridge United Methodist Church, popularly known as the Green Church, was razed in 2008.

From my Ovington Avenue page:

The “Green Church” was built in 1899 by George Kramer. It is one of the last relics, along with the Episcopal Christ Church at Ridge Boulevard and 73rd Street, of Ovington Village, formed by a group of artists and artisans in 1850 who had purchased the Ovington family farm. Incorporating under the name Ovington Village Association with Charles Parsons as president, they opened Ovington Avenue through the region, lined with spacious homes on 400-foot wide plots. Ovington, still boasting a bend in the road between 3rd and 4th Avenues, ran from the concert hall (the Atheneum) to the village. That part of Ovington is now lined with beatiful brownstone buildings and has been suggested for landmarking.

The AIA Guide to New York City in 1988 called it a “lovely cared-for local confection, with its chocolate joints oozing.”

If only it had been cared for in recent years, but the church, it says, quite awhile ago ran out of funds to make the necessary repairs. 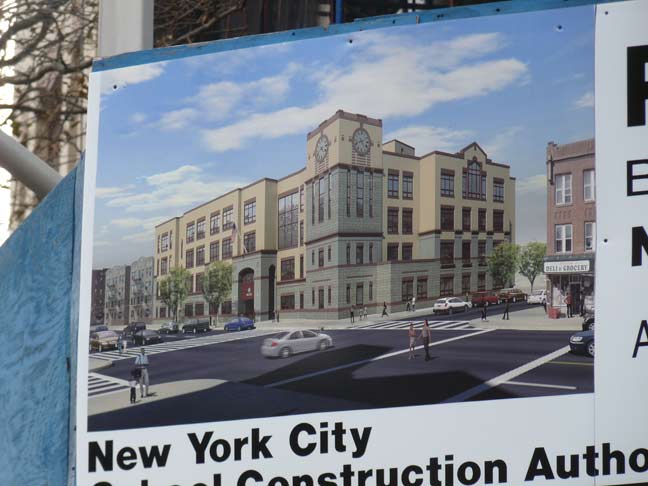 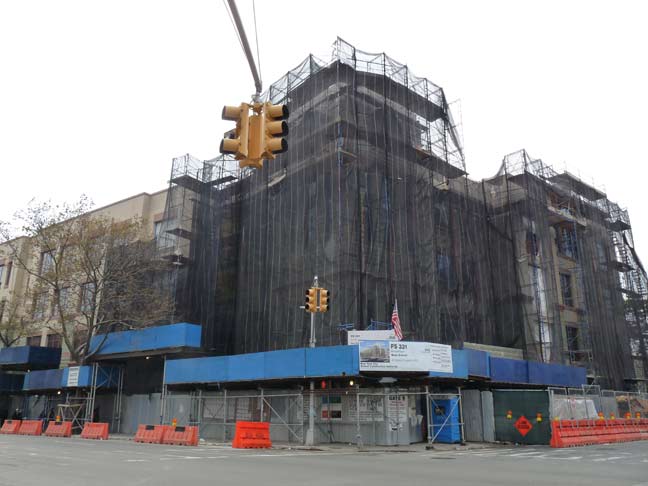 After a few years as an empty lot, the church site is now giving rise to PS 331:

Located at the corner of Ovington Avenue and Fourth Avenue in Bay Ridge Brooklyn, PS 331 is being constructed to ease overcrowding at neighboring PS 102 at 211 72nd Street and PS 170 at 7109 Sixth Avenue. The school is being built on the grounds of the now demolished Bay Ridge United Methodist Church, also called “the green church.” The new state-of-the-art four-story school will have elegant 19th century design elements from the original church. The school will house 680 students and is scheduled to be completed by the fall of 2013.

As subcontractor to Plaza Construction for this $50 Million project, Citistructure is responsible for the $4.5 Million of masonry work on the project which involve installation of all interior and acoustic CMU, brick, and cast stone for the main building as well as the brick and cast stone for the new clock tower, one of the main elements being carried over from the church. CitiStructure

Seems to me bit outrageous, and something of a mockery, to put a clock tower resembling the 1899 clock tower on this site.

680 students is 680 students. But the school should have been built elsewhere, and the “Green Church” should still stand.

at least its a community based structure, not some stupid condo, was the church low on congregants or had money woes? is that why it got razed?

At least they didn’t put up a bunch of Feders Specials.

If they had built this anywhere else, I would be impressed. That school actually looks much better than most recent school construction jobs I’ve seen. Unfortunately, giving what it’s replacing, it’s impossible not to be disappointed.

Not the church it replaced. Of course not.

Still, better a school with architectural elements that memorialize the Green Church than some glass-and-brick (or worse yet, windowless) monstrosity.

I’m sure if Notre Dame cathedral had be located in NYC, it would have been torn down by now.

This country has no respect for beauty or history. Only $$$$

You hit that nail on the head!

I commend them for honoring the church with the tower, but the building’s overall design is HIDEOUS. They have the matching green bricks at the bottom, which becomes green stucco in places, and then gives way to beige whatever. It looks like they ran out of green and just finished it with what they had. A very poor design. If they were going to continue to honor the church, they should have made it ALL green.