OVINGTON AVENUE and the “GREEN CHURCH”

We’ve heard it all before…rapacious developers threaten to eliminate one more piece of New York City history’s puzzle. In the case of the Bay Ridge United Methodist Church on 4th and Ovington Avenues in Bay Ridge, however, the picture is muddied by the fact that it is the church’s own pastor who has conracted with a developer to demolish the structure.

The Bay Ridge United Methodist Church, known by some Bay Ridgeites as the “Green Church” because of its unique green ashlar construction, was the only building in New York City with a serpentine stone facade. The stone is believed to have been quarried from the Revolutionary War battlefield of Brandywine. There is a crypt adjoining the church containing the remains of more than 200 early residents of Bay Ridge. The dwindling Methodist congregation, 60 in number, has put the building up for sale. Massey Knakal, the realtor, and Pastor Robert W. Emerick report that the property is in contract for 12.5 million. The buyer intends to demolish the church and build condos. The destruction of this building, one of Bay Ridge’s true landmarks dating to 1899, may be imminent.

The church will need a court order from a Kings County Supreme Court judge to finalize the sale.

An RFE had been filed with the Landmarks Preservation Commission, but the Commission has not — some say will not — calendar it for hearing. If the LPC calendars the hearing, the church could be saved– but once a demolition permit is issued, LPC can do nothing. 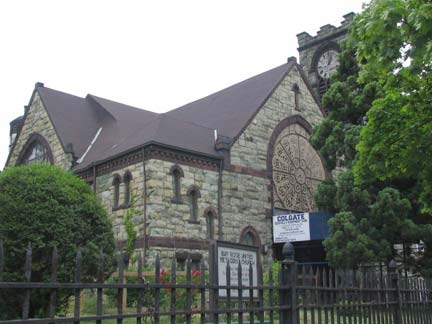 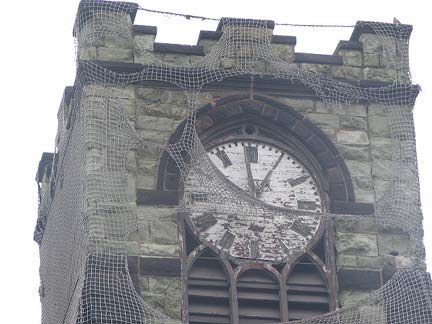 The AIA Guide to New York City in 1988 called it a “lovely cared-for local confection, with its chocolate joints oozing.”

If only it had been cared for in recent years, but the church, it says, quite awhile ago ran out of funds to make the necessary repairs. 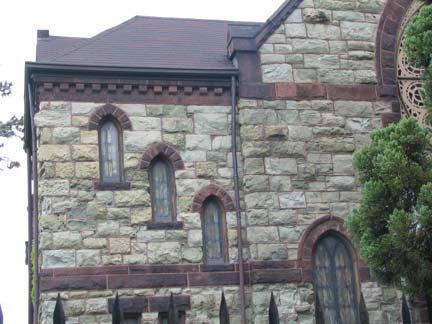 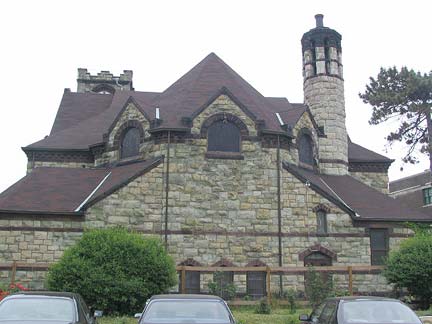 Back of church viewed from parking lot

The Committee to Save the Bay Ridge United Methodist Church was formed in April 2007 by concerned residents determined to not let this relic of early Bay Ridge slip away. Thus far both sides have dug in for a lengthy battle, with church congregants and pastor determined to sell the property for the millions they believe is necessary for the survival of the parish. The committee would like to forge a compromise that would allow for the restoration of the building without significant monetary contributions from the congregation. 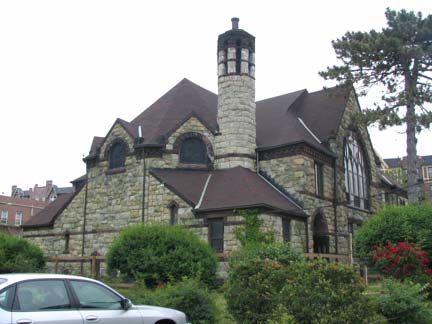 Back of parking lot, a view of the campanile 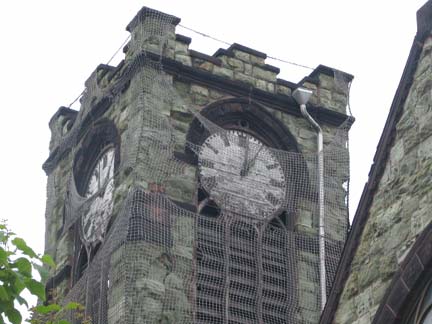 Tower in danger of crumbling, with stopped wood clock 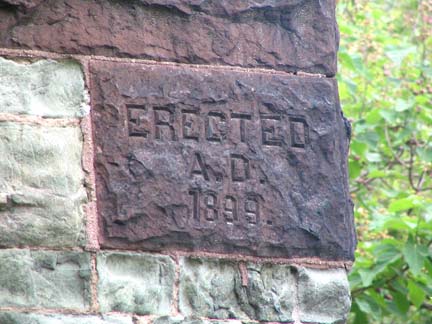 The “Green Church” was built in 1899 by George Kramer. It is one of the last relics, along with the Episcopal Christ Church at Ridge Boulevard and 73rd Street, of Ovington Village, formed by a group of artists and artisans in 1850 who had purchased the Ovington family farm. Incorporating under the name Ovington Village Association with Charles Parsons as president, they opened Ovington Avenue through the region, lined with spacious homes on 400-foot wide plots. Ovington, still boasting a bend in the road between 3rd and 4th Avenues, ran from the concert hall (the Atheneum) to the village. That part of Ovington is now lined with beatiful brownstone buildings and has been suggested for landmarking.

Before the Village was constructed,

The Ovington family owned a farm in the vicinity in the 1840s. Henry Alexander Ovington, who bought the property for use as a summer home, was the assistant chamberlain of New York City. Three of his sons owned Ovington Brothers, a china shop on Fulton Street whose name can still be found on vintage crockery. Another son, Earle, was the first air mail pilot employed by the U.S. Post Office.

However, the most famous member of the Ovington family was Mary White Ovington, a co-founder of the National Association for the Advancement of Colored People (NAACP), and a moving spirit behind the Niagara Movement.

The history of the area is not limited to the annals of the Ovington family. Rather, the intersection of Third Avenue and Ovington Avenue was the site of a skirmish between colonial forces and British troops a few days prior to the 1776 Battle of Brooklyn.

Ovington Avenue was originally named Cedar Lane. It served as the gateway from the local concert hall, the Atheneum, to Ovington Village. Historic Districts Council 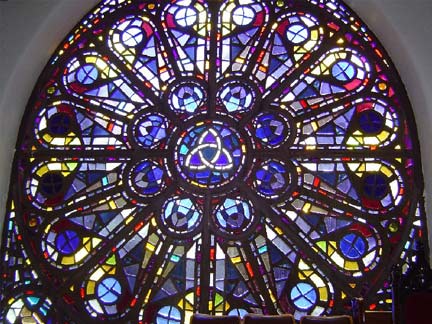 A look inside at one of the stained-glass windows. 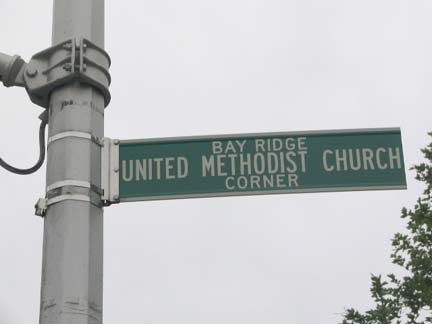 In 2003 the congregants got the corner of 4th and Ovington named for the church by the Department of Transportation. The only vestige of the old church is the street sign.

ForgottenFan Alan Armitstead, with a dissenting view: My Dad was the pastor there for about 9 years back in the late 1950s till we moved to Staten Island in 1967. Suffice to say, it was probably when the church (and its congregation) were both at its peak

The congregation was overwhelmingly white, as was nearly all of Bay Ridge at the time, but behind my father and several other local pastors, the church became an agent for social change in the neighborhood. As a young boy, I played in the parsonage back yard with what seemed to be half the neighborhood children. The church itself was a source of wonderment to me (and my brother and sister) with its back staircases, balcony, and the magnificent clock tower and bells. I remember climbing the steps to the tower and ringing the bells on many occasions. One was when President Kennedy was assassinated and I recall we also rang them when the Pope visited New York in 1965. I also remember shoveling the snow and sweeping rice up after Saturday afternoon weddings and of course the noise that was made as you ran your ruler or a broken branch along the wrought iron fence from nearly 71st street all the way to the house at 362 Ovington. So while not a resident, I can sympathize with the sentiment that says, don’t let it go.

I will always be proud of this congregation’s support for my father (and his associates) who led the fight for turning Bay Ridge into an inclusive versus exclusive neighborhood. Now as time has marched on and neighborhoods change, older institutions can find it difficult to maintain their past glories. I think it is a shame that the church might be razed but understand fully the challenges of a dwindling congregation trying to maintain an edifice such as is the Bay Ridge United Methodist Church. The church would be hard-pressed to maintain this building in the best of times and when numbers dwindle and church-going habits change then unfortunately the writing is on the wall. A congregation’s responsibility is to the Lord, not to a building, and while the decision was undoubtedly painful, I believe Reverend Emerick and the congregation have made the only decision they could make in selling the property.

A similar view from Matthew Lysiak: Save the Green Church. Why? [Brooklyn Paper]

The history of Bay Ridge United Methodist Church goes back to 1830, when the region was still known as Yellow Hook from its light-colored soil. The first church was organized in a home at what is today’s 6th Avenue and 76th Street, and had moved to 4th and Ovington by 1875. The present building, as we’ve seen, dates to 1899, the year the 5th Avenue El arrived in Bay Ridge, at its terminus at 3rd Avenue and Senator Street. The el vanished in 1940, but the terminal is still marked by a public plaza. The BMT 4th Avenue line arrived in 1915 and led to the urbanization of the heretofore largely suburban and rural area.

Ovington Avenue was pretty much in place and laid out by 1873. It runs in a slightly curved line from 3rd Avenue to 15th Avenue and was probably constructed in stages to lead to the Brooklyn, Bath and Coney Island RR (West End Line), then a surface line but today’s West End El along New Utrecht Avenue. The numbered street grid came along later; if you look at a map you’ll see that Ovington is not quite parallel to its surrounding numbered streets. In Bay Ridge, it supplants 71st Street south of Bay Ridge Avenue (69th Street) for the most part, and when it enters Dyker Heights, beginning at 10th Avenue, it is found north of Bay Ridge Avenue and assumes the route of 68th Street. Often, a street that is not quite straight or out of line with its partners is an aboriginal road or otherwise was laid out before the other streets were. 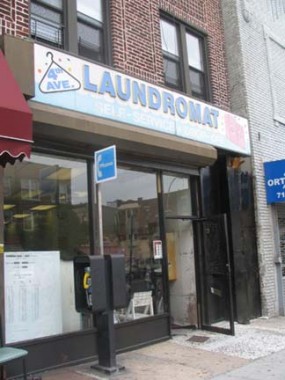 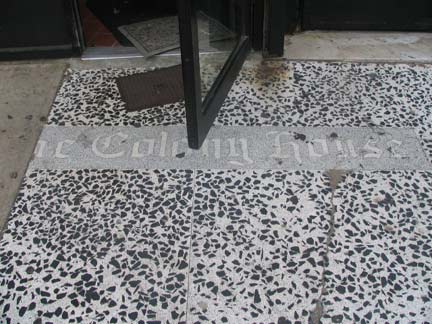 Any old hands remember The Colony House? The 4th Avenue Laundromat has taken its place, on 4th between Bay Ridge and Ovington Avenues 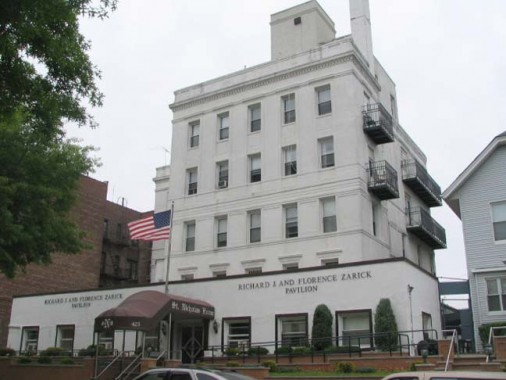 Most blocks in Bay Ridge feature classic detached 2-family homes interspersed with apartment buildings, or there are rows of attached brick buildings and brownstones. But–here and there–there are blocks with complete wild cards, and Ovington between 4th and 5th is one of those. I have been passing 457 Ovington for years, a distinctive blond bricked 3-story mansion with a Spanish-style roof. And it is a complete mystery…no one seems to enter or leave; its old-school wide-slat Venetian blinds are always pulled down, the brownstone gradually chipping, the paint is very gradually peeling away, the iron fence is gradually rusting. It seems to be slowly winding down and fading away. Perched on a hill, it seems as if it was constructed with a view of the Narrows in mind. Nothing ever seems to change here.

Click on images in the above Gallery for more photos of the mysterious 457 Ovington. 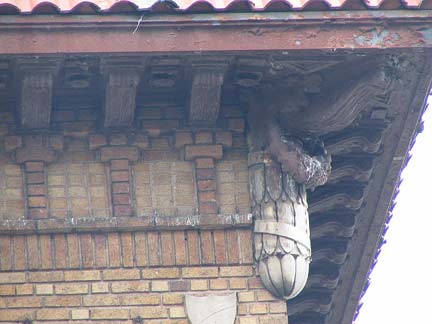 Close-up of eave ornament resembles a bundle of fasces 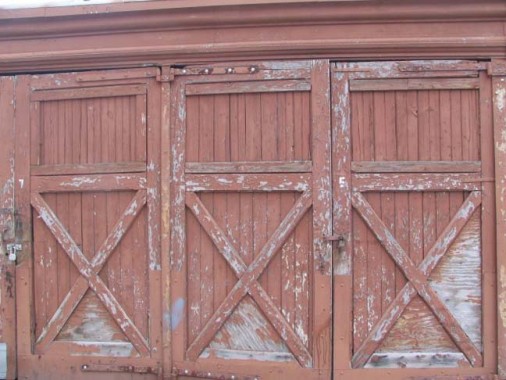 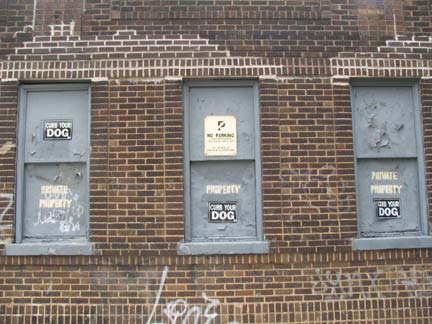 And that’s not all. Just west of 457 you will find a driveway lined with about thirty garages on both sides that look like they haven’t been touched since the Truman Administration. They are probably the orginals and have never been modified.

Despite everything else, the lawn and rose bush are carefully cut and maintained. The effect is of a conscious preservation of the building the way it was in the Fab Forties.

Any Forgotten fans in the area know the owner? Or have any information at all about this gorgeous yet puzzling building? (I’m told it’s indeed occupied) 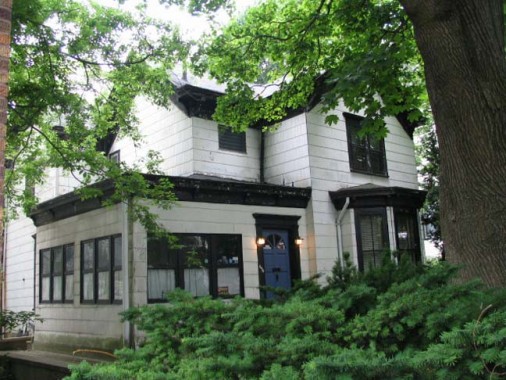 Immediately across the street from 457 is its opposite member, 456 Ovington, which in its own way is just as puzzling as 457 is. This house is completely surrounded by lush vegetation. It too has its windows shielded by old-style venetian blind slats (actually my father had them at his apartment in Bay Ridge; are they easily obtainable? Martha Stewart, are you reading this?) 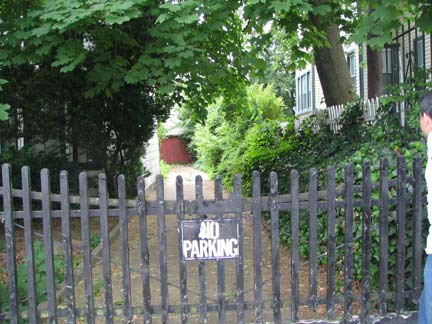 456’s dirt driveway looks like a country lane. The property seems to be up for sale, so this building may eventually become a concrete and fedders classic. 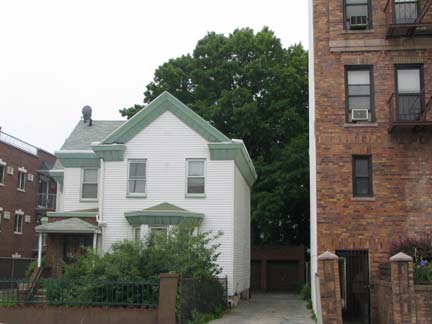 Mutt and Jeff, or David and Goliath…460 and 462 Ovington, a 1930s sleek Moderne and a probable tiny farmhouse that may have been part of Ovington Village. I had to include this pool hall on Ovington across 5th Avenue; this is the place where your youthful webmaster wasted his days with Pac-Man Fever.