I remember 1973 somewhat, but not well. I was fifteen and still in high school. Most of my life revolved around schoolwork and following the Knicks, who had just won their last championship to date, and the Mets, who went to their second World Series and dropped a 7-game tilt to Oakland. I was just getting started with rock music as I tuned into WPLJ for the first time (as opposed to the pop music WABC). Any interest I had with NYC’s changing scene wouldn’t be ignited for several years yet. 39 years later, I’m still pretty much a kid in adult skin and bones.

A 1973 video shot mostly in NoHo by camcorder pioneer Skip Blumberg and David Cort has recently come to light. There’s scenes in a cab, a recording studio and a loft apartment, but I was mostly interested in the signs, which were still mostly hand-rendered instead of mass-produced. I got some screen shots…some of which are fuzzy, but that’s the nature of the beast.

If you remember any of these locales, make a note of it in Comments. 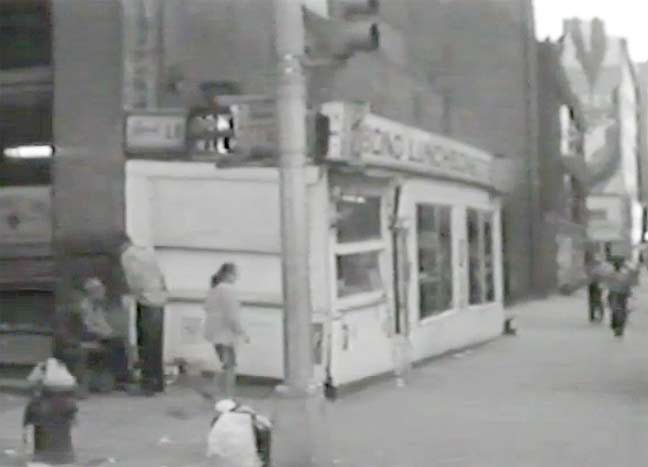 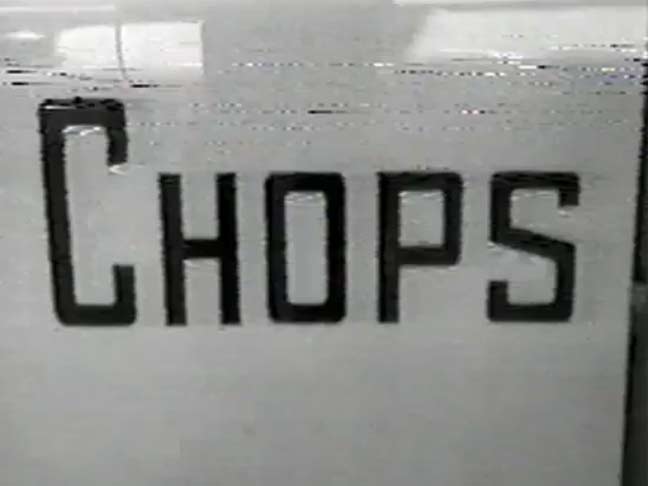 Chops, the availability of which is noted on many old restaurant and bar/grill signs. 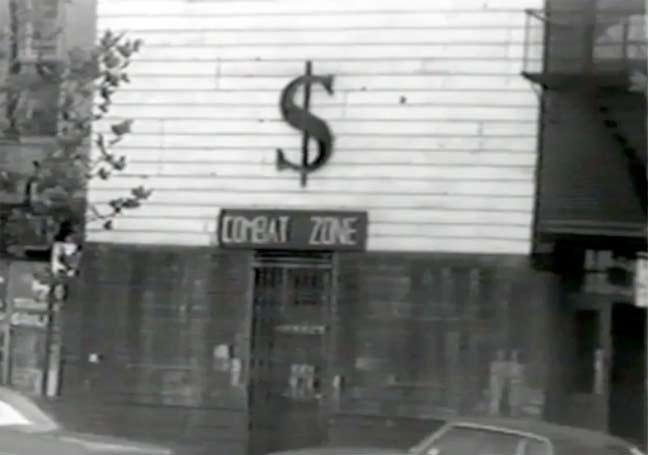 Combat Zone, a bar on Lafayette north of Houston. 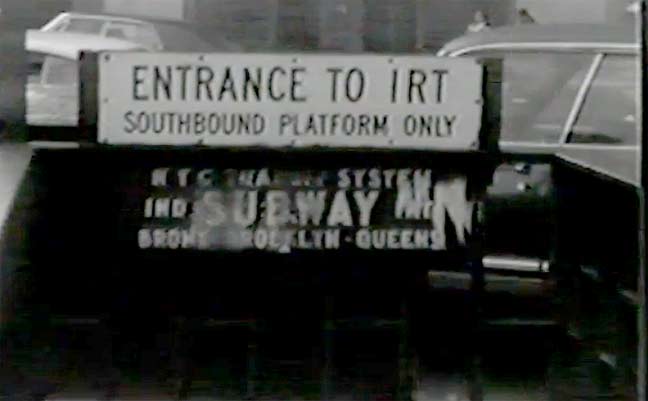 Entrance to the Broadway-Lafayette IND subway station, where there was a one-way transfer available to the southbound Bleecker Street IRT platform. A connection to the northbound IRT platform was opened in 2012. 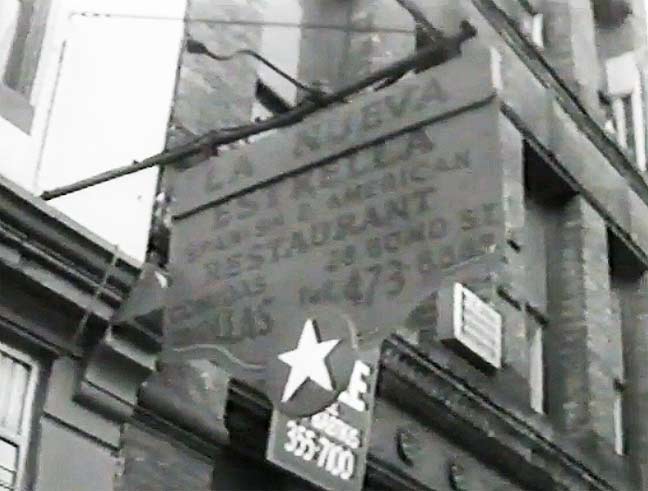 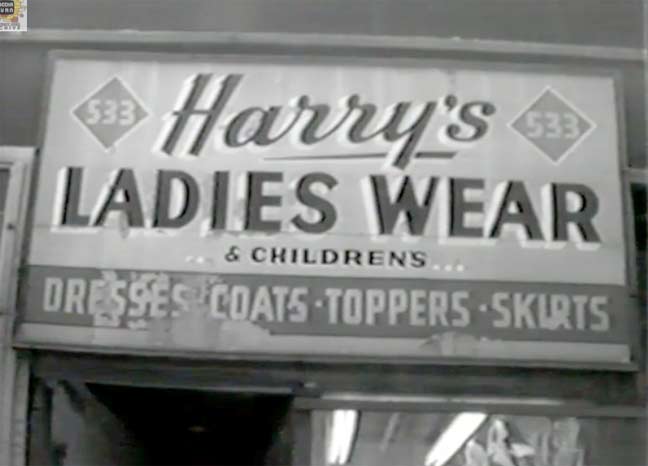 Broadway in NoHo remains home to many textiles wholesalers. 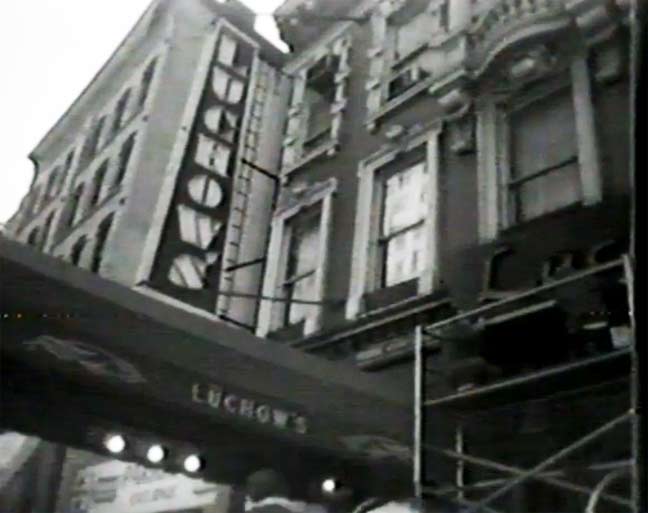 Luchow’s, NYC’s premier German restaurant, was on the south side of East 14th at Irving Place. It closed in 1981. 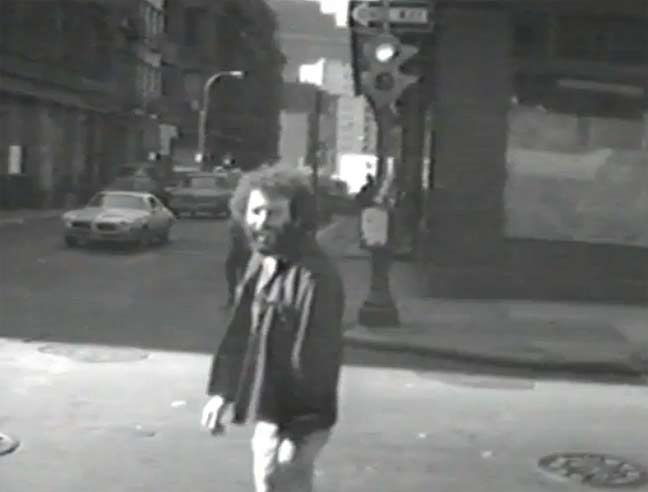 An “Olive” stoplight with Ruleta signal, Broadway. These small stoplights were placed catercorner on hundreds of NYC intersections. 1985 turned out to be their Cretaceous-Tertiary boundary though, as that year, the remaining specimens were all replaced by cylindrical poles or the tall guy-wired variety.

I believe the La Nueva Estrella sign is actually a 1940s Coke sign that has been painted over.
The round disc at the bottom was a coke “button” sign with a bottle image.

The old “OLIVES” had no yellow; does anybody remember that when you had a GREEN light, that both the RED and the GREEN would light up (that was your YELLOW), and then go fully RED! Imagine trying that today…. I sure as hell would not want to be in the middle of an intersection with today’s pedal to the metal attitude of so many drivers…. Sure: there are many safe drivers, but then again, there are also Red Light Cameras….

“The old “OLIVES” had no yellow; does anybody remember that when you had a GREEN light, that both the RED and the GREEN would light up (that was your YELLOW), and then go fully RED! Imagine trying that today…. ”

Yes, I remember the red and green lights on in place of the absent yellow.However, do you remember the rare three color “olive” stop lights ? Basically the same model as pictured above but with the yellow light included.

I remember one on Claredon Rd in Brooklyn back in the early 60’s. I think the cross street was either Nostrand or Bedford Ave. If somebody remembers where, chime in please.

I have seen only one picture of a red-amber-green Ruleta 4-way, perhaps it was on this site – but I’m not sure what borough it was in. Perhaps they were just early experiments with that mode of signalization. By the time NYC decided to start making a real switch to red-amber-green in the early 50’s, the Ruleta signals were no longer being made, and they were installing Marbelite signal heads, which look more contemporary. But they were still painted slate grey back then – which I prefer over yellow. I happen to be one of the lucky collectors who has found one of the red-green Ruleta signals. They are a definite NYC icon.

The few 3-lighters on Olives I recall over the years must have been Marbleites.

More than likely, any 3-color signal seen in NYC before 1980 would have been made by Marbelite, though, as mentioned, there were perhaps a handfull of 3-color Ruletas out there. During the 50s and 60s, they also replaced many of the 2-color Ruleta/olives with 2-color Marbelites on corners where they updated the signal heads without updating the controllers to 3-color sequencing.

There had been a red-amber-green Ruleta in Queens at the intersection of 70th Steet and Juniper Valley Road. PS 128 was at the corner, so the amber may have been to help school children cross the street.

Yep, that’s 1973 alright! Leftover hippies and their hair, filthy streets, crumbling buildings. Was Lindsey still in office? That idiot made sure every middle class family would soon leave. I believe this phase lasted through 1979 and the Jimmy Carter era.

And for all fellow connoisseurs of typography… the font used on the vertical Luchow’s sign was the then very popular Futura Black. Talk about a time warp.

Re: The bar with the “$” sign — contemporaneous with these shots (early 70’s), the red-light district of Boston MA was known as the Combat Zone. I wonder if the name of the bar is related to that, or are they both related to the then-recent-and-to-some-extent-still-then-ongoing Vietnam War? In any event it looks like a Bowery bums’ bar, another artifact of 40 years ago not likely to be encountered nowadays.

The video was shot using Sony AV3400 Portapak in 1/2″ 325 line format, the rig was supplied by The Alternate Media Center at NYU (on Bleeker Street above the Bleeker Cinema). My father ws one of the founders of AMC, I hung out there as a young teen and remember Skip and David were among the students that regularly roamed the village lugging the 35 lb recorder and 10 kb camera. This was at the beginning of portable video, Network crews had begun using a system called the PCP-90 which consisted of a Camera and 1″ tape recorder in a backpack format that weighed close to 70 lbs, (the battery resembled a 12 volt car battery).
I also remember the Lower Village (before SoHo/NoHo/TriBeCa came into use) fondly. There were still Garment and Hat manufacturers between Spring and Greene (West of Broadway) and they still sold Ham Radio parts on Cortland Street. My father was aVillage resident for 52 years, first at 88 Bleeker and then at 240 Waverly Place and finally at NYU’s University Village, where he passed away July 12th of this year.

1973, I completed my first year of college, and came home for the summer to work in the kitchen at Booth Memorial Hospital. Then returned to college in the fall for my sophomore year. Drinking age was 18 then, voting was 21. Nixon was still Pres, I believe.

My older cousin came to town with his expense account and took me, Mom and Dad to Luchow’s for dinner. It was spectacular from what I remember – old school even back then and had a dusty and musty feel to it, if my memory serves. I remember tasting the fancy food for weeks after.

Celebrated my h. school graduation at Luchow’s in 75
No oom-pah band but plenty of farty german food and Dinkel-Acker beer

I remember going to Luchows before they moved uptown. Wearing a suit was a requirement for admission.

That’s a pretty cool old Firebird in the last photo. Cars had a lot more character back then.