Brooklyn Bridge Park is an over $200 million extravaganza, an 85-acre park along the East River from Atlantic Avenue north and northweat along the East River to Jay Street in DUMBO. It was formerly docklands worked by the Port Authority of NYC, which ended operations north of Atlantic Avenue in 1984. It was a bustling, robust operation that used floatbridges as well as a local railroad to bring supplies and goods from the world to Brooklyn, a job that has largely been supplanted by the container port in Newark. That left the 85 acres largely abandoned, and until recently in NYC, former waterside industrial land tended to stay abandoned.

In 2002, funding began to be acquired (ultimately, high rise apartment buildings will need to be built nearby to keep the revenue stream going; just one, 1 Brooklyn Bridge Park, has been completed). Actual construction began in 2009 and will be done in various phases, as the park has been divided into six sections, or “piers” between Atlantic Avenue and Old Fulton Street. The northernmost and southernmost, Piers 1 and 6, opened to the public in 2010 while construction continues on them, while the interior sections, 2, 3, 4 and 5, will largely be finished by late 2013.

In the summer of 2011 I visited the sections of the park along Furman Street before construction began in earnest, and chronicled much of the disappearing, lost world of riverside industry. 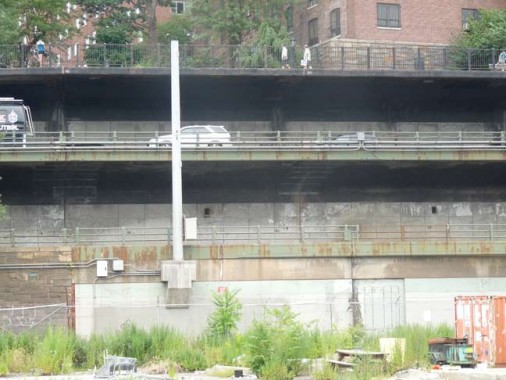 A look at the triple-decker Brooklyn-Queens Expressway, which was built along the bluff over Furman Street in the early 1950s. The top deck was built as the Esplanade, though most locals call it the Promenade, which, until Brooklyn Bridge Park was built, featured Brooklyn’s best views of the island to its west.

For a look at the construction of the Promenade/Esplanade, as well as views of what the Furman Street waterfront used to look like, see this Gothamist page. 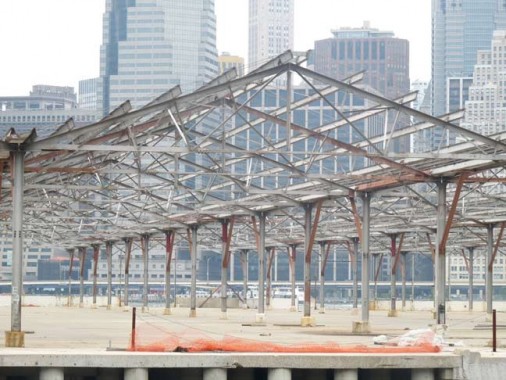 Skeletons of the dockside sheds. 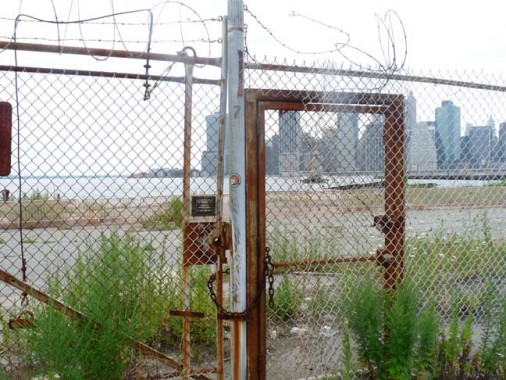 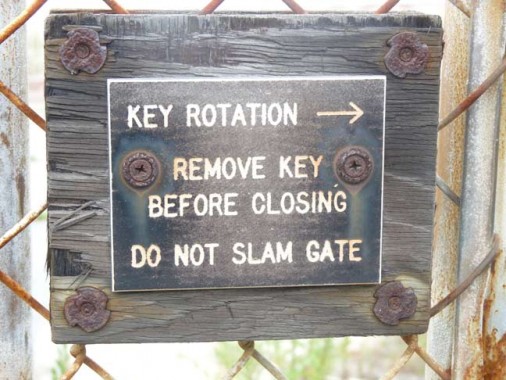 Before BBP opened, you needed to be buzzed into the dockside area, which was well-protected by a cyclone fence and barbed wire. I’m fascinated by the fact that while now the waterside is visitor-friendly and the public is encouraged to loll about, in the past if you were to stumble in here, you would likely be greeted by near-rabid guard dogs and union workers. 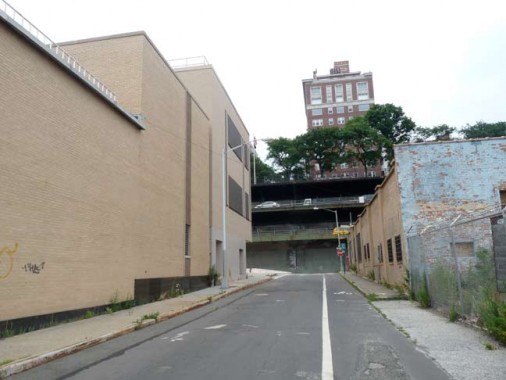 Two streets run west from Furman Street to the water: Montague, above, and Joralemon (see below). Before the BQE was built here, the sloping Penny Bridge connected this part of Montague and the section in Brooklyn Heights. 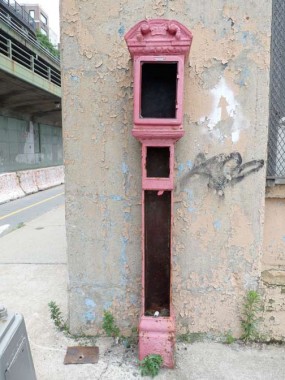 There’s a pair of rare, if deceased, Gamewell fire alarms on Montague and Joralemon. 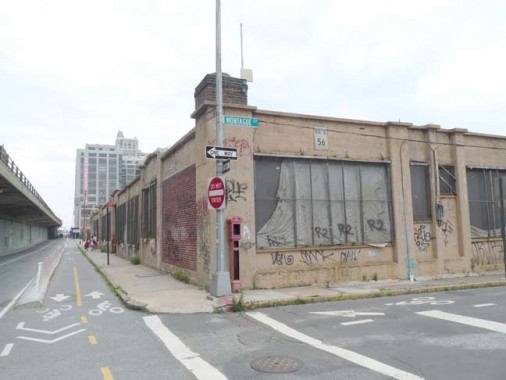 One of the old dockside buildings still stood at Montague and Furman. I’ll check in early 2013 to see if this building is being repurposed with the opening of the park. 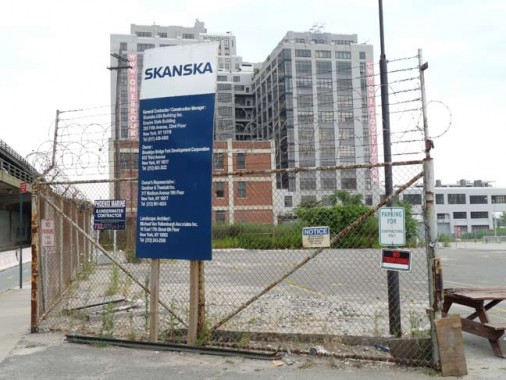 This is the entrance to what would be Pier 5’s picnic area, with 1 Brooklyn Bridge in the background. 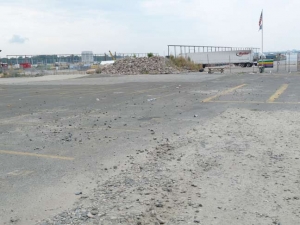 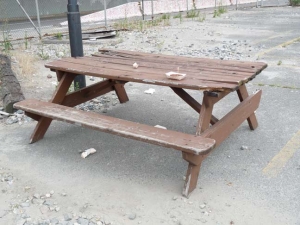 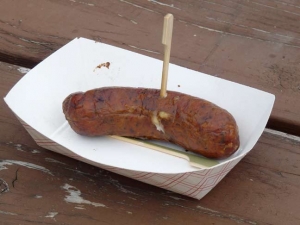 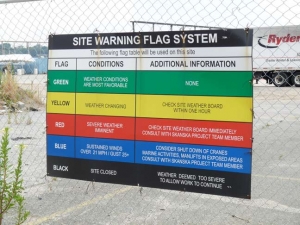 This area has now been filled in with grass and other amenities and is now the Pier 5 picnic area. Somewhat comically I found a battered picnic bench and even some comestibles here. 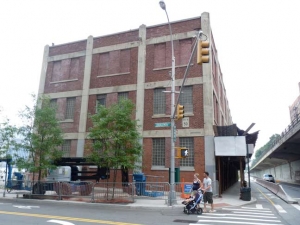 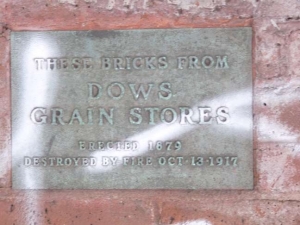 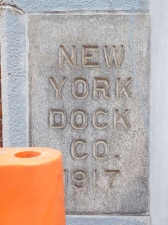 I hope the New York Dock Company Building, built here at Joralemon and Furman in 1917, will see some sort of use in the brave new park world. 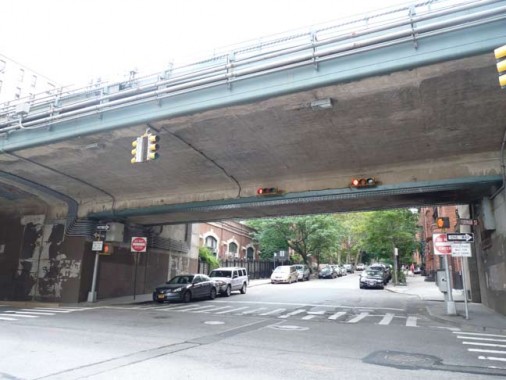 Joralemon Street runs from Brooklyn’s Boro Hall at Fulton Street west, under the BQE past Furman to the waterfront. When the BQE was constructed it was the only street permitted to pass under it.

In the second decade of the millennium, it’s Parkworld USA along Brooklyn and Manhattan’s waterfronts. What was formerly industry employing thousands now has been thrown open for fun and frolic. I wish, though, other areas that desperately need parks can get them too, like western Queens and the southern Bronx.

I had friends that lived in apts overlooking the Esplanade towards Manhattan and above the dock areas still in use in the 60’s….I have never seen any pictures of the streets from Brooklyn Heights down to the water level before the BQE was built…Are there any available to look at?

GREAT TRIP BACK!!!!!..I worked for NYDock 1976-78(before moving west)and it was damm busy….I worked as a week end tug boat dispatcher and p/t(week day)extra hand on there railroad,we worked the TOWER printing plant and a few curb side trailers,by 1978 all there locos were a barge awaiting movement to be junked….didnt the family that bilt the Brooklyn Bridge on the heights???

Larry, there’s some great pictures and a video about the history of Brooklyn Heights & construction of the BQE here.

Thank You, Brian for the link to The Gothamist….pics were great

NY was one of the few port cities to restrict public access to its shipping docks in order to deter organized crime influence on them.
Now,because of 9/01 every port in the nation is restricted.