It’s no secret that both Brooklyn’s and Queens’ street numbering and naming systems are a bit of a mess, confusing out- of-towners and residents alike. Brooklyn has several sets of numbered streets: numbers with no prefixes, and North, South, East, West, Bay, Beach, Plumb, Flatlands, and Paerdegat numbered streets, and I’ve likely missed a few.

Then there are the lettered avenues that run east-west south of Prospect Park in Kensington, Flatbush, Midwood, Gravesend and Sheepshead Bay, and later extended into Canarsie. When they were first mapped in the late 1800s and early 1900s they began with A and included all letters up to Z, and ran from west to east with only occasional interruptions. Then, the developers took over.

Just south of Prospect Park, Dean Alvord, T.B. Ackerson, Lewis Pounds and others purchased large tracts of farmland where streets had only had rudimentary beginnings, if any at all, and built large, state-of-the-art homes on large plots, while placing utility lines underground — a new development at that time. Wishing to impart a dignified air to the street names, Avenues A through D in Prospect Park South, Beverly Square East and West, Ditmas Park and other developments got British-sounding names: Albemarle, Beverley, Cortelyou, Clarendon (Avenue C got two “C” names) Ditmas, Dorchester, etc. A couple of these new names, such as Cortelyou and Ditmas, honor Dutch families that had settled the area beginning in the 17th Century.

Avenue F became Farragut Road east of Ocean Avenue, honoring David Farragut, the Civil War admiral. However, the piece of Avenue F between Dahill Road and Ocean Parkway was never renamed, and neither were the pieces of Avenues A and B in Remsen Village, Avenue C in Kensington, or Avenue D in East Flatbush and Canarsie. The entire length of Avenue E was named for a local 17th Century landowner, James Foster. After World War I, Avenue Q took the name of Teddy Roosevelt’s son, Quentin, who was killed in the war. 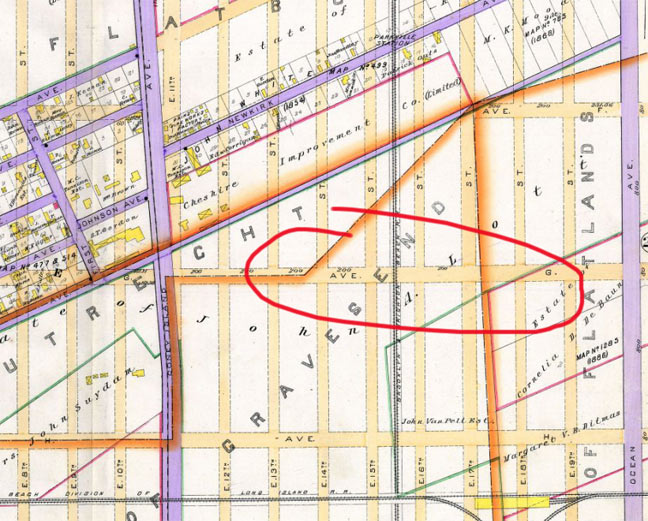 Avenue G/Glenwood Road has always been baffling. It runs through what is now the landmarked Fiske Terrace/Midwood Park neighborhood through East Flatbush and into Canarsie. I’m not entirely sure when the switch was made from Avenue G to Glenwood. In 1890, Avenue G was mapped through what was then the junction of three separate Kings County towns: New Utrecht, Gravesend and Flatlands. All became part of the borough of Brooklyn in 1898. 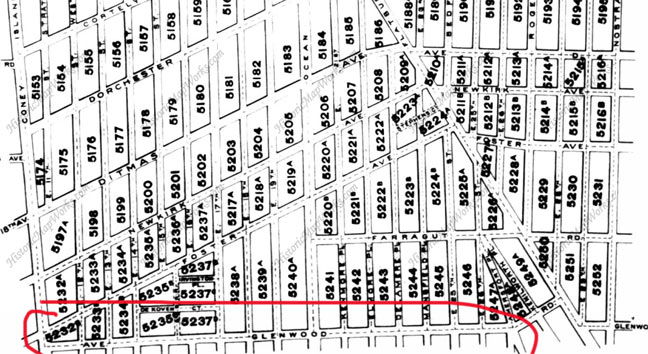 By 1929, a Belcher Hyde atlas from that time shows Glenwood Road throughout, with no Avenue G anywhere.

Interestingly Avenue H also runs through Fiske Terrace, but it has never acquired an “H” name — it has always been Avenue H. 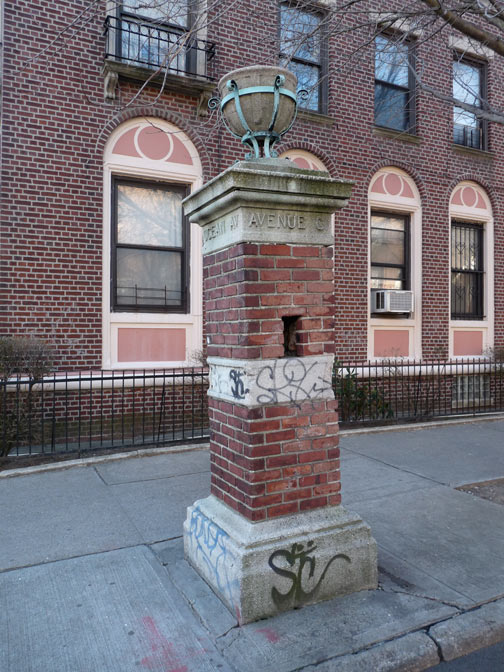 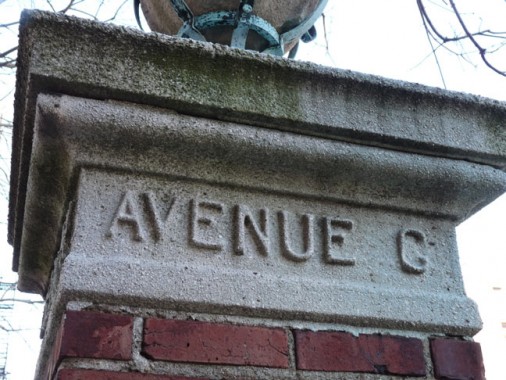 At Ocean Avenue at Glenwood Road, a pair of battered gateposts that once marked Fiske Terrace still stand. The sculptor chiseled in the letters with very small serifs, so the “G” crossbar is barely there, so it looks like Avenue C, not G. 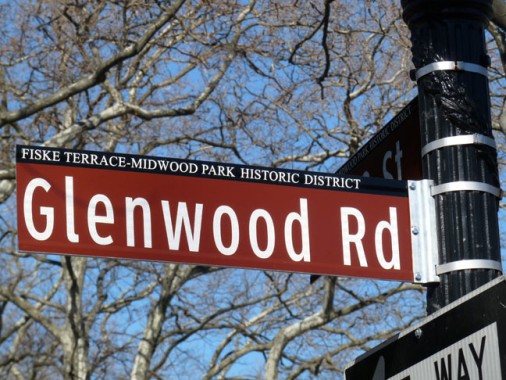 However, it’s the last reminder of Avenue G. Area street signs have recently been changed again, as this is a newly minted Landmarks District.

Of course, there are some nearby signs that have been sun-bleached to white, and naturally, those are the last signs that will be replaced if they are replaced at all!

You used a potion of a 1910 map of Fiske Terrace in the above post. Please let me know if a map like this of all Brooklyn (and even better the other boroughs too) is available to print on line- I am looking for a map with all the block numbers filled in for my research on tax photos. The 1940 photos at the Municipal Archives are on microfilm reels with each property labeled only with block and lot. If I scroll through a reel and want to know where I am, I have to consult the 1929 Hyde-Belcher maps but they are in 4 volumes and you have to go to individual pages to finally view the block numbers a cumbersome process- would love to see the whole borough at a glance.
Thank you for a response.

“Brighton” streets, in the eponymous neighborhood. (Can’t leave out “Little Odessa”; there are people who live there who might not take too kindly to the omission, if you catch my drift.)

Allan, as I gave it to you, Brighton 12th Street was originally Humbert, not Humberto Street. In fact there is an apartment building on that street named the Humbert Apartments.

But thanks for mentioning it and crediting me, after a fashion. By the way, every numbered street in Brighton Beach at one time had a name. Most of these are referred to in older Geographia Maps
published say from the 1930’s back. One in particular I recall is Brighton 2nd Street being originally
Lakeland Place (hence, the Lakeland movie theater on Brighton Beach Avenue)

The names you quoted to me were originally given to me by my parents, and I later on confirmed
these in an early Geographia Map edition. In fact, an aunt of mine continually referred to Brighton
11th Street as Hoff Street..

That first Avenue G sign is so worn, it looks more like a C than a G.

Also, a couple of errors. You have a typo in one of the Cortelyous, and Avenues A and B are in East Flatbush, not Brownsville which begins at East 98 Street.

I’m also surprised you didn’t discuss the mid alignment of the grid near Ralph Avenue where Glenwood turns into Farragut, and H turns into Glenwood. I’ve always wondered if anyone knew the reason for that. That’s got to be confusing for many.

Thank You, your site was sent to me by my daughter who now lives in Fl along with myself….It was a treasure to go thru , will take me quite a while to ever finish…I was born and raised in Flatbush, know all the areas , Midwood, Prospect park, Bay ridge etc, never knew there was a Ave G.. Really enjoying your site,,thank you so much. I never should have left,,. biggest mistake I ever made .

I am thankful to have ran across this article because I was unable to locate Avenue G where my family lived way back before the 1910. I also posses a post card marked avenue G more of a rare artifact considering the avenue no longer exist.

You left out the fact that the street named Avenue C runs parallel to Cortelyou Rd.