FAREWELL TO a 5th AVENUE TWINLAMP

I regret to mention that one of 5th Avenue‘s last original Twin lampposts, on the SW corner of 5th and West 32nd Street, has been removed and replaced with a temporary stoplight.

Between 1892 and 1965, 5th Avenue was lit by dozens of Twinlamps of two separate species, one designed in the 1890s and another designed in the 1910s; most of the Twins were replaced by a special Twin version of the Donald Deskey design, but by 2013 many of the Deskeys had worn out and are not being replaced. Traditional octagonal poles and cobra necks have taken their place, and 1990s 34th Street Partnership posts now occupy a large swath of the Queen of Avenues. 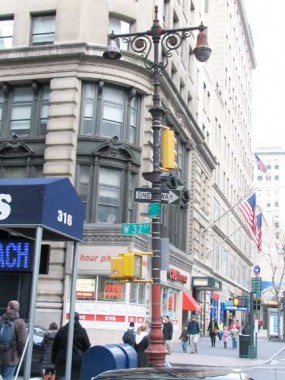 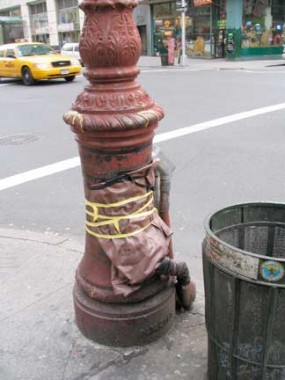 The post had not had a lot of love; the NYC Department of Transportation tends to care more for retro versions of old lamps, instead of the original posts themselves. It was battered and listing the last time I was by there a few years ago. 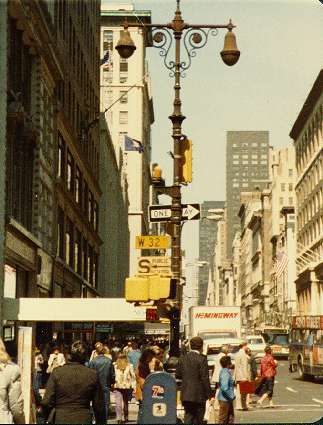 Here’s the post when it was in better shape in the 1980s. For many years it carried both a Westinghouse ‘cuplight’ and a 1940s Bell luminaire. Note the Public Shelter sign with the arrow — it told you where to go if the Communists attacked. Photo: Bob Mulero 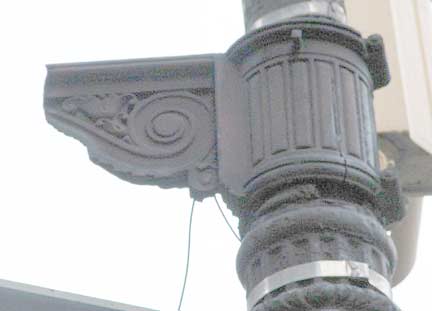 The orange fire alarm lamp had been knocked off years ago, but its bracket was still in place. 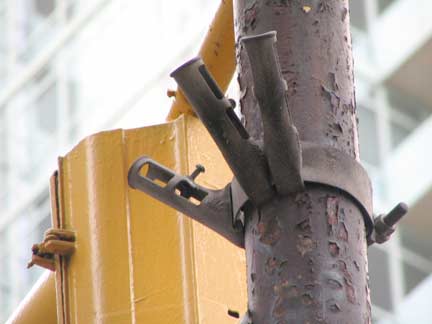 The pole also had brackets that held flags or banners during parades.

All remaining cast iron lampposts were declared landmarks by the city’s Landmark Preservation Commision some years ago. As such, I’m hoping that the post will be renovated and returned to its original position.

I visit Manahattan once a year, so I’ve been able to see this light in passing glances.

The streetlight was out of order for the better part of a decade between about 2004 and 2011. In 2010, the pole received a renovation–a new paint job, base cover and fluorescent twisty bulbs, but the lighting itself was not restored until a year later in 2011. By the last time I passed by in December, 2012, the lights were out again. The pole had also developed quite a list over the past few years.

The glass over the cup light has been missing for years; that’s how I could tell that twisty bulbs were installed in 2010.

Hope this is simply out for repair and renovation–but after the demise of the twin at the corner of West 23rd and 5th, I’m not expecting much.

Once a year? You mean, you don’t live in NYC and you still manage to recognize those poles?

Oh, yes! This is the first original 5th Avenue twin I encountered in 2000, and I’ve been tracking it ever since. BTW, the remains of fire alarm bracket were removed in the 2010 renovation.

Kevin has posted a shot of a retro-crook in Queens near the Sunnyside NYCDOT facility that sports an LED Mission Bell fixture. If the 5th & West 32nd pole is out for repair and renovation, could it come back as the first 5th Avenue twin LED?