The Type 24 Bishop Crook lamppost is the most common of the remaining older NYC bishop crook posts, and it’s the model on which the many thousands of repro crooks that have been populating NYC streets were based on. It’s notable, though, that the form used to have nearly a dozen different variations, only a couple of which can be found today. There’s the diminutive Type 1 BC, recognizable by its shorter size and “ladder rest” crossbar (there are only two of these left on streets, on Broadway and Beaver Street downtown, and maybe one or two in City Hall Park). 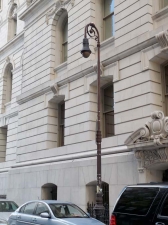 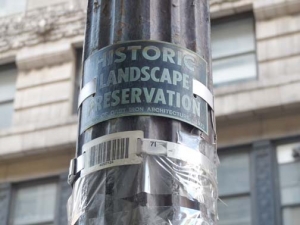 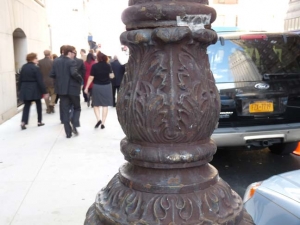 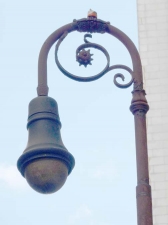 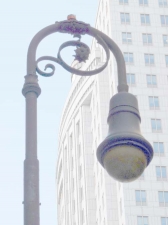 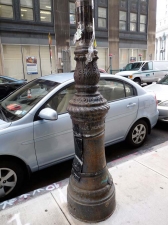 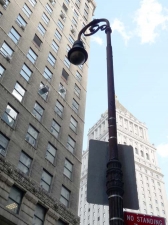 Then there’s this one on Reade Street just west of Centre, the 24 A-W. It’s a relatively latter-day bishop crook design with many of these installed in the 1940s. They feature a minimum of filigree and ornamentation on the shaft, which is cylindrical on the upper part of the post. At the apex, the scrollwork is decidedly less augmented and much simpler than its Type 24 bishop crook brethren. Seen in retrospect it was probably an effort by the Department of Traffic to save money.

There are only a couple of these around, too, one here on Reade Street, another on Walker uptown, and one or two in City Hall Park.

I remember this one from my occasional trips to the area. Glad it’s still there.