Here’s an item that’s been under my nose for decades and I never realized its presence. Charles Vanderveer,  a scion of one of Brooklyn’s larger landholding families,  constructed this home in the southeast end of Canarsie on what is now the south side of Flatlands Avenue between East 106th and 107th Streets in 1829. It’s one of a number of colonial and postcolonial-era farmhouses remaining in Brooklyn, most in the East Flatbush or Flatlands areas, and one of them, the Schenck House in Mill Basin, was taken apart and reassembled at the Brooklyn Museum in the 1960s.

The original Vanderveer, Cornelius, settled in what became eastern Kings County in 1659 and gradually the Vanderveers controlled a lot of territory in Brooklyn in the colonial and postcolonial times. The house in question was built by Charles Vanderveer (1796-1878), a sixth-generation Vanderveer to have lived here. Vanderveer’s Mill, also known as the Red Mill, stood nearby on Fresh Creek east of East 108th Street. 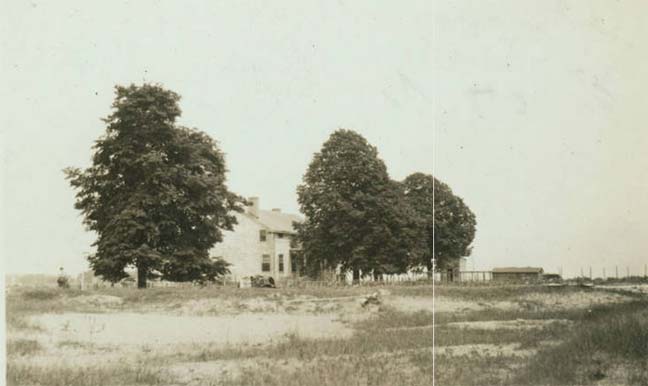 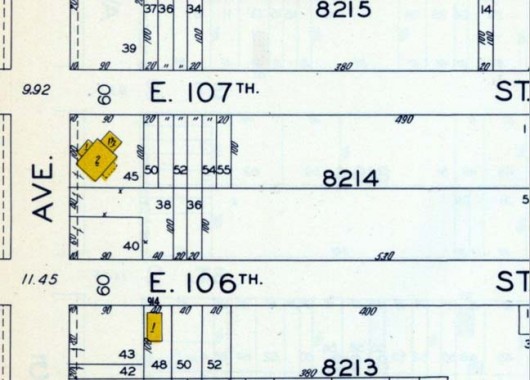 On this 1929 Belcher-Hyde map, the Charles Vanderveer House stands alone on Flatlands Avenue. Note its orientation away from the street grid.

The house remained in possession of the Vanderveers until 1928, then reverted to the state. A small airfield was built behind it before the Brooklyn street grid was extended east.

Thanks to Harley Nemzer for the heads up.

Not sure how Jefferson could have visited this house as he died in 1826, before the construction of this building. Perhaps it was another home owned by the family? And seeing he was 83 when he died and slavery was abolished in New York in 1826, his sireship legend is dubious as well. Unless he ‘staked his claim’ on an earlier visit.

You are correct, I’ll excise that, until I get confirmation on the building date.

Oh please put the legend back in – NY is a city built on stories and of stories! And to each one there is a kernel of truth which Occam’s razor leaves untouched. Maybe it was a different Jefferson, say Sherman Helmsley?

Vandaveer estates were built over a sacrificial forest and pond the early york rite free masons uses in ceremony.

I agree with C Fletcher. Put the legend back in with a disclaimer.

Well, Jefferson was known for siring children with his house slaves, so I guess the story is a bit apocryphal. Curious as to when the house was moved in line with the street grid. The 1929 map shows the house at an angle with Flatlands and 107th St, but the modern day street views clearly shows it in line with today’s grid.

The owner seemed knowledgable, and I was a bit gullible. I should have checked the facts first.
He spun many stories about graveyards of Indians, Slaves and Family on the projects property just north of the house.

The location of the three churches form almost a triangle, the perimeter of which one could easily walk. If you were to visit the churches today, as well as the Canarsie Cemetery located two blocks west, you would find the remnants of a Native American burial site in the church yard of, I believe the Lutheran Church as well as an historical collection of early American documents in The Canarsie Dutch Reformed Church. A visit to the older section of The Canarsie Cemetary, closest to Remsen Avenue contains the remains of the early Dutch and German settlers who attended these churches.

I have always felt that the archetecture surrounding these churches, as well as the land near the Rockaway Parkway train station should have been classified as a landmark. Unfortunately, many of the beautiful large Victorian homes lying between Remsen and Rockaway Parkway were torn down. However, many of the homes still standing represent thearchetecture of the post Civil War era.

The Vanderveer house was said to have been built in 1803-1804, according to several books and the Brooklyn Daily Eagle.

As I understand it, the original Vanderveer homestead and mill was built on this property circa 1704. The mill was destroyed by fire mid 1700’s, was rebuilt, and ultimately was operated by my Great, Great, Great Grandfather, Charles Boerum Vanderveer until his death on March 4, 1879. The farm and property was sold off sometime between 1900 and 1904 and the descendants moved to Suffolk County Long Island.

I am a descendant of Cornelius Vanderveer from Netherlands circa 1659. Interesting to follow these historic threads.

Hello John! And other family members! I am also a descendant. In fact my most direct family left Flatbush around 1740 and bought land in what was known as Griggstown New Jersey. The family has remained on our property since then. We now only have 40 acres remaining. We erected a beautiful Victorian home for their Flatbush family members to come visit in the summer. It was built during the Civil War. It also remains in our family and is my home. I have a picture in my possession that my uncle, who is now 85, tells me was the original Vanderveer home. As he understands the home was taken down and moved to Chicago where at least a portion was displayed in Museum along with other early American homes. We have yet to find any information about this. Would love any information. Montymom2020@comcast.net

John Van De Veer here on the left coast. Flatbush is the origin of the name. There is a good rap about Vanderveer Place (housing project) circa 2010. Full circle from a heralded slave owner.

Charles Van Derveer here as well… does anyone know where to get more information on this stuff?

I am amazed to have found this – and a million “thank you’s”!
I am a direct descendant – my mother was born a Vander Veer and I have traced lineage back to thge late 1500’s. Great info here to help my geneology. 😀

Do you have a family tree?

Was not Charles Vanderveer Jr. the owner of a spread in Bridgehampton that was bought years ago by the Vreelands of fashion fame?

Happy to have stumbled on this! I’m a descendent of Elizabeth Vanderveer, who might have been a sister or cousin of Charles. She married a fellow named James McGinnis (Maginness?) and I can’t find much on their later life. Anyone know good sources besides Ancestry? Thanks.

My stepmom did a lot of digging and it turns out that I’m a direct descendant of the Vanderveers. I’m from philly + never knew I was from New York let alone has some famous ancestors. Pretty cool

I have in my possession a painting of the Van Der Veer homestead 1787,Flatbush – we re decedents. I’d be interested in discovering more.