Though there are examples of previous stoplight stylings, such as the short Olive posts with their Ruleta signals (a few of those can still be found in Central Park, and when I began FNY there were a few samples still hanging around local streets) … 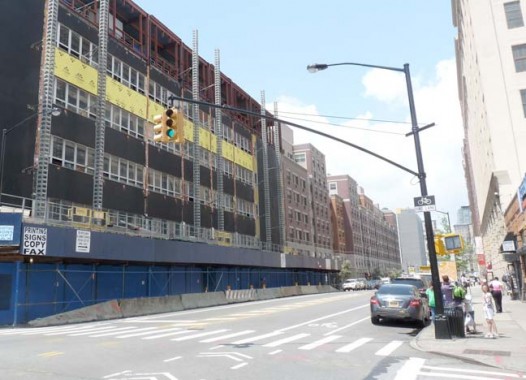 … variances from the thick-shafted, guy wire masted heavy-duty main intersection NYC traffic light are few and far between. Though they first start cropping up in photos from the late 1950s, I have very little information on these as far as the manufacturer or anything else. They replaced the “Wheelie” castiron stoplights that had first appeared in the 1920s. As a rule, the big stoplights appear two to an intersection, usually caterconer from each other, and some are equipped with additional stoplights or pedestrian control signals.

Beginning in the 1990s, variances of these posts began to appear, as retro versions of older styles such as Bishop Crooks, Corvingtons and even Type Fs began to be plopped on top of these stoplights. To me, that’s a jarring dissonance of styles. The latest development seems to be the addition of a street sign on the mast, a method pioneered elsewhere in the country on large intersection stoplights.

True departures, though, have been rare… 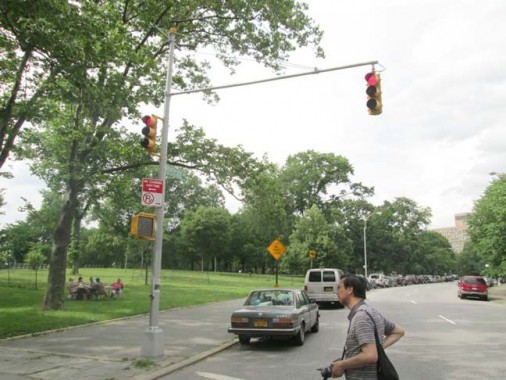 A simpler version of the guy-wired mast and shaft has popped up here ande there. This one, on Riveride Drive between Sakura Park and Grant’s Tomb, is still on the job. photo: Joe DeMarco 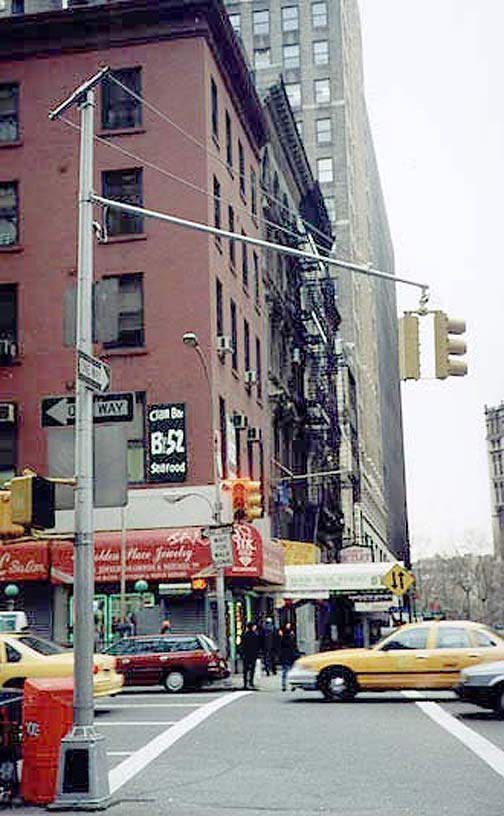 There had been a pair of these on Church Street and Park Place in Tribeca till the mid-2000s. They were replaced with the standard form. 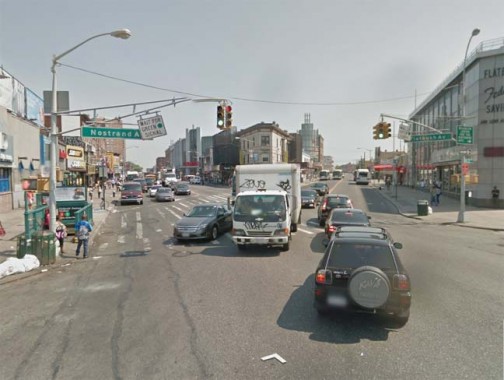 The intersection of Nostrand Avenue and Flatbush Avenue, known locally as “The Junction,” boasted a pair of double-masted combination streetlamp/stoplights. One of them survives till today. 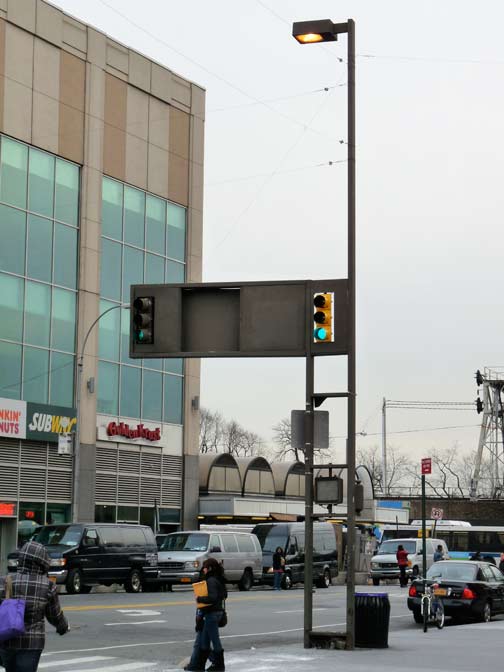 Some streets, such as Jamaica Avenue in Queens (here), Avenue D in Brooklyn, West 181st in Washingtn Heights, were equipped with modular style lamps/stoplights like these in the 1970s. They seem to be in the midst of a phaseout in the 2010s. 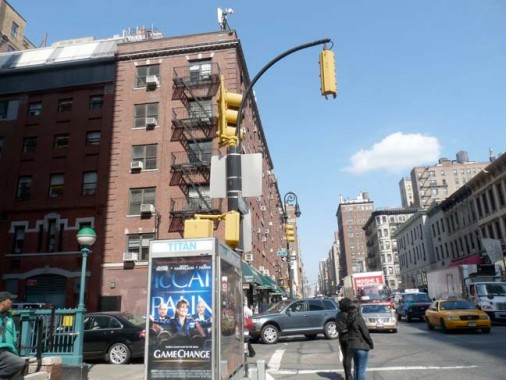 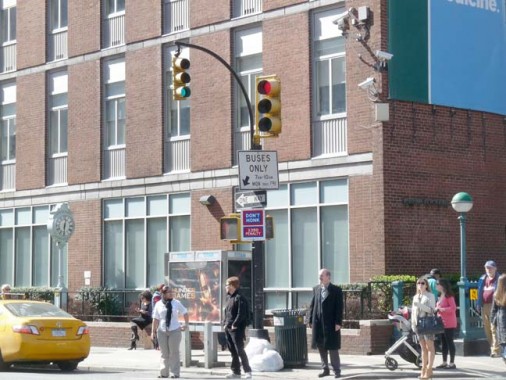 One of the keys to the Donald Deskey style lamppost is its adaptability — a single Deskey shaft is used frequently to support a bank of stoplights. Here, though, is the only instance I know of where the stoplight is affixed to the mast generally used to hang a luminaire, at Lexington Avenue and East 77th Street.

Kevin, I noticed other “nonstandard main stoplights” in the outer boroughs as well, which may be of note.

In Staten Island, at the intersection of Arthur Kill Road and Richmond Avenue, (street view) the stoplights are hung from overhead wires, rather than guy-wired masts.

Also, there are double-masted combination streetlamp/stoplights at the intersection of Astoria Boulevard South and 32nd Street (map).

Another type of traffic light of note is located at the Staten Island intersection of Father Capodanno Boulevard and Seaview Avenue (street view), where the traffic lights are hanging off the gantries themselves.

Steven:
I’ve lived in the East Valley since 2005 & I always felt that there were parts of Tempe & Gilbert that reminded me of my former home in Queens. I attributed this to irrational nostalgia, but for the first time you made realize that this isn’t the case. It’s not nostalgia, it’s the composite traffic signal/street lighting! However, you have to admit that there are similarities between Tempe & Flushing: ASU/Queens College; Sky Harbor/LaGuardia; Tempe Town Lake Park/Flushing Meadow Park. Urbanization is the great common denominator.

The modular lamps you photographed on Jamaica Avenue are also in use in Port Richmond on Staten Island. You can find them at the intersection of Port Richmond Avenue and Richmond Terrace. I think they were part of an attempt to rejuvenate the neighborhood. I can still remember when they were installed. I thought they were so unusual and incredibly modern (granted, I was just a little kid). They’re still there, although they look like pretty weather beaten these days.

Where was the first image below the title card taken?

Schermerhorn and Nevins I think.

There surely isn’t a subway entrance at 3rd Ave. and E. 77th St. That has to be Lexington Ave.

Thanks for the correction

Additionally, there’s also one “double-masted combination streetlamp/stoplight” at West Tremont Avenue and University Avenue in the Bronx. It looks like there used to be a pair.

Yet another unusual type of stoplight is further south on University Avenue (at the I-95 ramp), where traffic lights are horizontally mounted, rather than vertically mounted.

The typical mast-arm/guy wire set-up that is in use throughout New York City has been in use as far back as 1954. New York City’s, then, department of traffic designed it, and the set-up was made of a special alloy, in which contained nickel, copper, and steel. Because of its design and composition, the set-up required little maintenance, and it had a high resistance to corrosion.