If you’ve been around long enough (like you know who) you’ve occasionally seen these metal and glass illuminated boxes mounted on utility poles, like the one in the title card, saying: “Telephone to call police.” As a rule they were lit by two light bulbs. Not too many of them remain around town, but they used to be more frequently found. 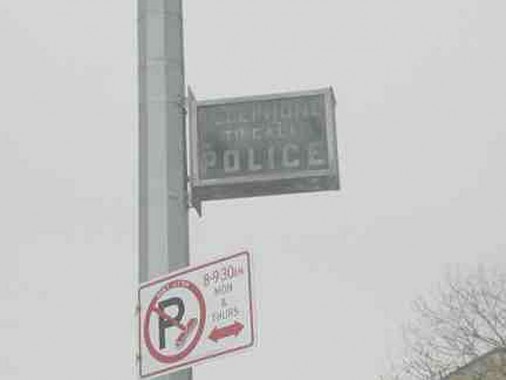 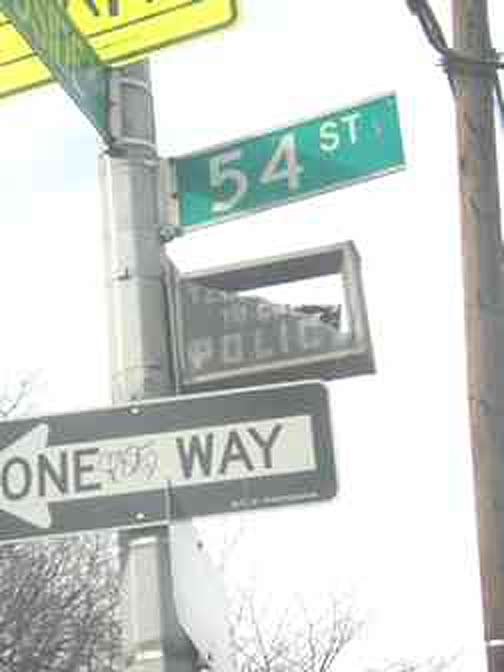 This one was formerly at Woodside Avenue and 54th Street. 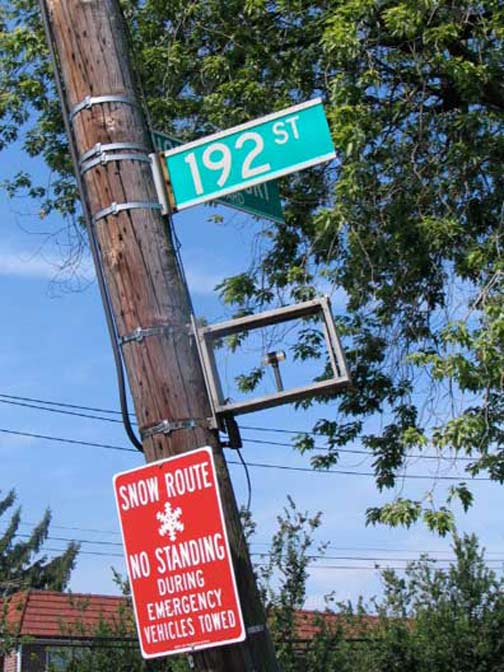 The remnants of one of the indicators is still found at Hollis Court Blvd. and 192nd Street in Auburndale. 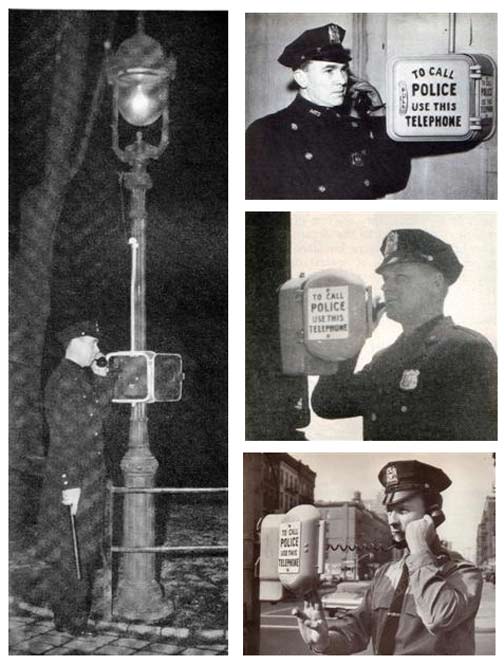 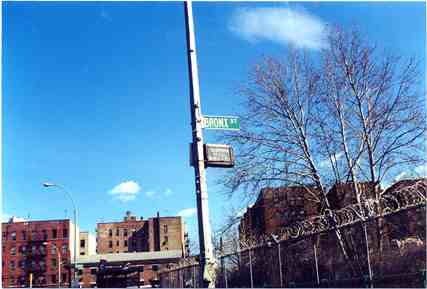 Here’s another marker, at East Tremont Avenue and Bronx Street, long since removed. 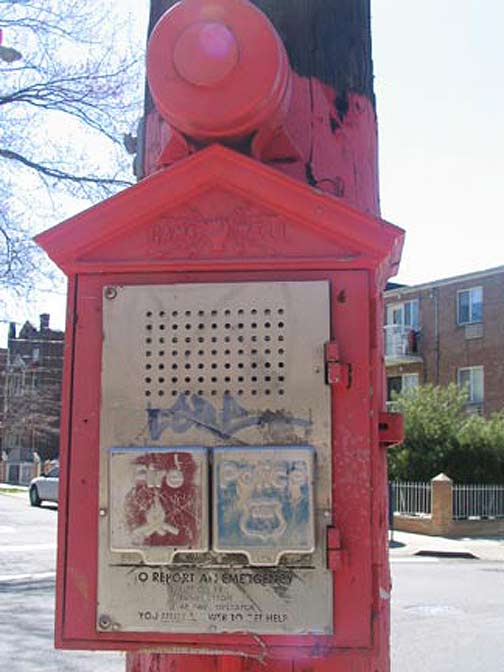 In the 1970s, the phones were mounted in tandem with fire call boxes. I remember Walt Frazier filmed a PSA  commercial on how to use these when they first appeared.

Of course, the universality of wireless telephony now makes many of the fire call boxes redundant, and the police phones had mostly disappeared by the late 1960s.

Turns out the Gamewell box seen above is a rarity. I’ve only seen three in the city, and this one was one such. ForgottenFan Al Trojanowicz:

Most alarm boxes in New York are of their own custom designs, and where a mechanical box was converted to ERS, special adapters were made to allow the more modern voice box innards to replace the former inner electro-mechanical box.  Of all boxes, finding a Gamewell box on the street was indeed a rarity.  In my time I only saw 2 (both in Queens).  Like all other box housings, FDNY was able to adapt a Gamewell shell to accept ERS innards.

The odd thing about this hybrid is that atop the box is a noise-making device to call attention when the mechanical box is pulled.  I believe these were mechanically linked and tripped when the box was pulled.  Also note a sliding cover to allow a key to be inserted to rewind the device.  I remember the Newark NJ Fire Dept had these on some boxes, and the local term was “growler”.  I don’t know what Gamewell called them.

The really odd thing is that I think it is impossible for the push-button electronic ERS box to trigger this device, thus it is one of the rarest boxes I ever saw in the City.  Last time I walked by, it was still there, though its paint badly faded.

Are they bigger on the inside?

According to a July 26th,1956 article in the Times,police call boxes were located in alleyways and walls of buildings to allow the beat cop to periodically report in to their station house.The increase in crime led to the program of relocating the City’s 2,174 call boxes to intersections mounted on street light poles. The signs,lit by two 32 watt multiple street light bulbs,had the words”telephone to call police ” on one side , and “emergency calls”on the other. I recall that a call box was located adjacent to the War Memorial in Astoria park.It was mounted on a unique pole that was similar to the standard steel street light pole of the time ,but it was only about ten feet tall. The illuminated sign was mounted on the street light at the curb. The pole was still there as of a few months ago. I only recall seeing on other pole like it somewhere in the flatlands area of Brooklyn.

Almost as bad for making someone feel ancient, by showing those old police call boxes, is showing police officers (or “patrolmen” as they were then called) in those mid-20th C. uniforms, almost as quaint to anyone under the age of, say, 40, as the Keystone Kops uniforms of the turn of the 20th C. were for you and me, Mr Walsh. I am sorry to report that I am one of those old fogies who remember police who were dressed that way.

i concur with evrything you said.

If I remember correctly, the phone boxes, like those shown in the right lower 2 pix above, were a pale green.

The officers in the pictures remind of ‘Officer Joe Bolton’. Anybody besides me remember him?

I still carry a callbox key on my key ring!

this marks you as most likely retired member of nypd, happy retirement.

Can you locate the Walt Frazier tv ad? It was vintage NYC 70’s.

The late tour roll calls always included a “ring” time. Years ago foot post officers, especially, had to ring the desk at their specified time to let the desk know they were OK and still on post. The ring times continued as a tradition as they were unnecessary with the advent of portable radios.

remember police call box light at waterbury and crosby avenues in the bx covered by 45th pct at more or less n/w corner. dont know when installed but wound up in drelict condition where in bent fram was all that was left and also no call box in sight at location ever that i saw. best as could view on google street view it was there in 2007 but gone as of 2012. figure it was installed along with a box at the time as way back when this area of bx nyc would be considered the sticks as they say and before cell phione proliferation and dirth of placesm tht would have had phione to use to call station house on rings as per roll call at least 4×12 and/or overnite hours if even out on street in those way back days in this area.

In 1967 our school in NC went to Expo 67 in Montreal. We stopped off in NYC on the way back. While waiting for the boat to the Statue of Liberty one of the other kids dared me to use one of the call boxes. I didn’t know someone answered as soon as you picked up receiver. I dropped the phone when someone answered. Was that considered a pre 911 hangup call?