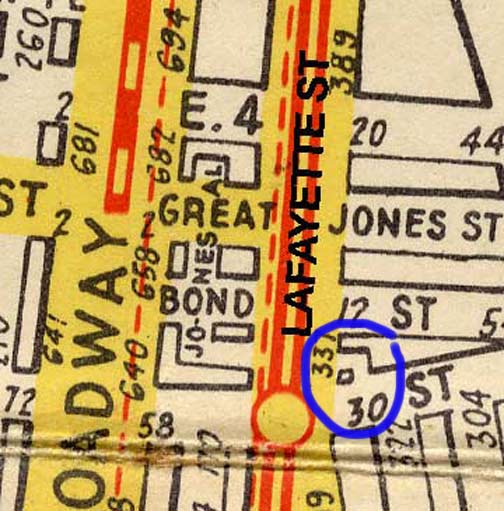 Though this alley is really one continuous lane, it’s unofficially called by three different names, though Hagstrom vouchsafed it “Jones Alley.” The north-south section… 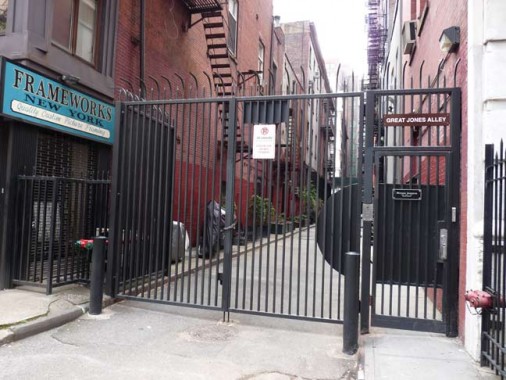 … is called Great Jones Alley, as in this shot taken from great Jones Street.

The short east-west section facing Lafayette Street is Jones Ally, and that bit actually has a street sign.

Then there’s the L-shaped section between Lafayette and Bleecker, circled in blue on the street sign. Is that part of Jones Alley? It used to be, and then it went by another name, but today it’s completely privatized and fenced off, like most of Great Jones and Jones Alleys. 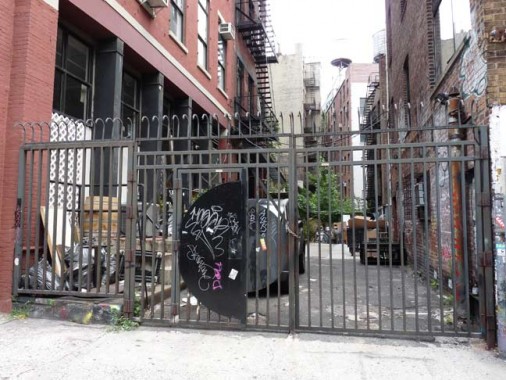 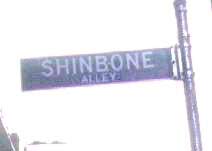 During my initial Forgotten NY ramblings in 1998, this section was labeled Shinbone Alley by the Department of Transportation, following a longstanding traditional naming of this short section.

My shinbone doesn’t have a bend in it like the letter L –I’d be pretty messed up if it ever did. It’s unknown how the name was bestowed, but other alleys around town like Washington Mews have also been called Shinbone Alley at some point. 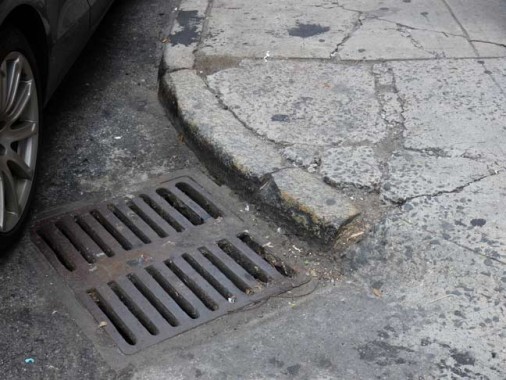 Whatever the name, this was once an official NYC street. It’s got the corner cut to prove it. 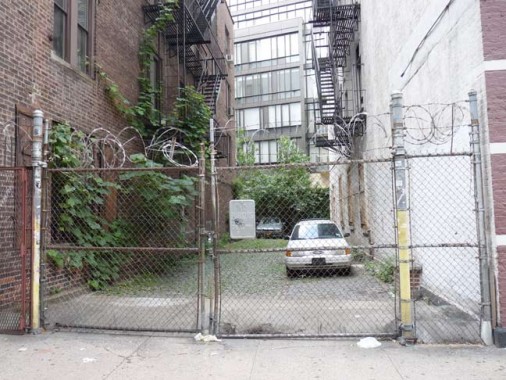 After bending yet again, Shinbone Alley ends on Bleecker between Mulberry and Mott. If you squint between the chain links, you’ll glimpse a Belgian-blocked paving.

There’s much more on Jones and Shinbone Alleys on this FNY page.

Sorry Kevin but it’s not Noho, a name almost, but not quite, as stupid as DUMBO. Since it’s north of Houston it’s the Village.

Jim,
You obviously don’t live in NoHo. People who do are proud to call it NoHo. And DUMBO was created by the original artist residents to make it unappealing to real estate developers. SoHo and TriBeCa were both named by the pioneers of these neighborhoods, as well.

It is not Greenwich Village. Where did you get that silly notion?

Why the gates? Isn’t this a public street?

NoHo is the more appropriate name since its east of Broadway.

I remember back in the early 70s when we used to pass this almost daily it was labeled Shinbone Alley but the signs would often disappear. Most likely the City changed the name to avoid replacing the signs so often.

Funny fighting over the names of gentrified neighborhoods that never had these names to begin with.. Dumbo is my favorite they should have called it Ratbo for all the rodent’s infesting the place

the Shinbone Alley street sign was visible at the ell from the Great Jones side. there was a foto studio there c.1990.

the street sign was routinely stolen. the last time I saw one there the sign pole was about 15 feet tall, I suppose to deter theft.