Janette Sadik-Khan, that’s who. The outgoing (as of November 2013) head of the Department of Transportation has decreed that all remaining “Curb Your Dog” signs will be taken down, reasoning that many of them are decades old, sun-faded, and showing the incorrect fine amount. Hard to argue with that logic, since everything costs millions these days and commissioning a new design and installing thousands of signs would likely be worth that much.

This is a city, though, in which hundreds of perfectly legible street signs in uppercase lettering are being replaced by ones with lowercase lettering — except, of course, the sun-faded signs that are now impossible to read, which will apparently stay in place till they fall off the pole they’re attached to.

It looks like I’ll have to photograph every remaining one before they hit the recycling bin — but here’s a few I already have. I won’t even pinpoint their locations — Janette will just have to find them herself. The title card is in the Bronx… 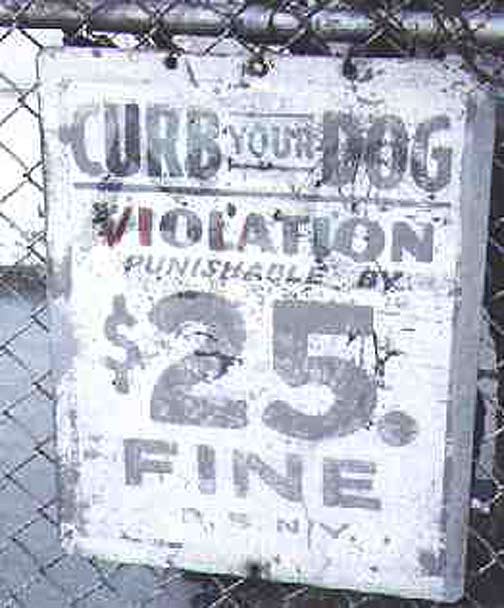 I found this aged specimen in northern Queens. The fine has increased quite a bit since it was placed. 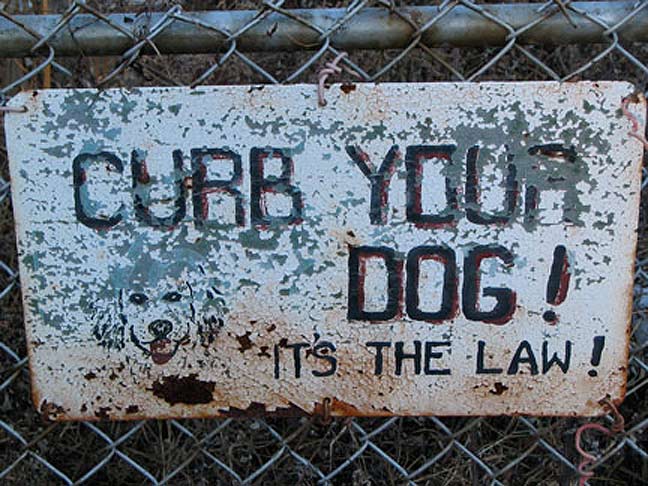 This is likely an unofficial sign. I found it in southern Brooklyn. 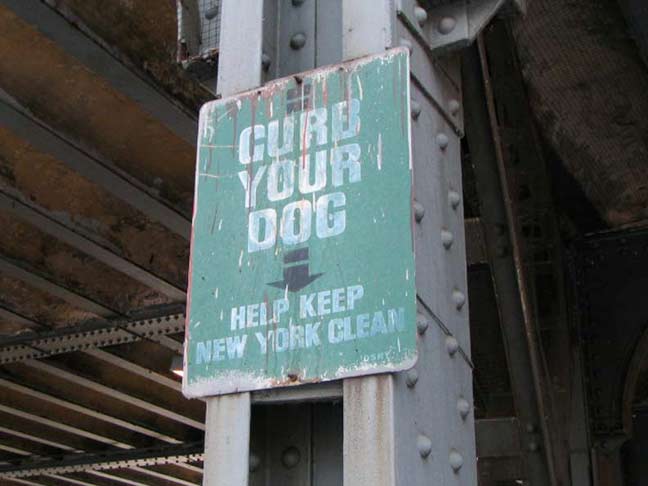 This one was probably placed under an elevated — where you can find all sorts of strange stuff — in the Swinging Sixties.

POSTS WILL BE LIGHT FOR A FEW DAYS

I live about 50 miles east of Phoenix, AZ. In Maricopa County there are dedicated equestrian zones. It’s not unusual to see horses & riders on public roads. However, nowhere will you find “Curb your horse” signs. Pets are great but they have a down side which needs no further elaboration.

The old phrase “curb your dog” meant (I think, I always found it confusing) that dogs should do their business in the “gutter”, that is, in the street just off the sidewalk, and not on the sidewalk. The $25 fine was for letting a dog leave droppings on the sidewalk. There was no expectation for people to actually clean up after their dogs prior to the 1970s, and the law requiring it was passed in 1978. The first sign in your first picture does not use the outdated phrase or specify a fine amount, so I see no reason for it to be removed. The other, older signs should go, I would agree.

I had a dog for twelve years, from 1997 til 2009 when he passed from cancer. It never would have occurred to me to leave his waste on the sidewalk or in the gutter.. From the day I adopted him I taught him to walk on the curb side and I always picked up after him. I’m a building super and I know what a pain it is when people leave it behind….:O

In parts of southern Brooklyn, especially the Homecrest neighborhood, a number of these signs have been replaced with “Please Curb Your Old Grandma” ones, featuring a silhouette of a squatting female in a coolie hat, holding a pair of chopsticks & a takeout container for picking up the droppings.

Sadik-Khan is exceeding her authority. She is not in charge of all city signage. She is head of the Transportation Department. These signs just like the “No Honking” signs she had removed, have nothing to do with transportation. It is within the pervue of Environmental Protection.

The pole signs are on sidewalk poles, some are DOT signs so she obviously is a bit confused about her authority there. She is, as we know, quite often confused in general, so we should not be surprised. However, she is certainly overreaching greatly if she thinks she can remove signs that are on people’s fences.

Why didn’t DEP object to her interloping?

Interested to find this as I have OCD and find clean up after your dog type signs dirty. I think New York’s idea of getting rid of them was a great one. If only we could come up with these ideas here in the UK. Instead we’re just adding more here in 2017. With us using sticker ones I think some of the older ones get almost impossible to remove as they get stuck on very well.