Now and then when I’m feeling ambitious, and a glimmer appears in the back of my mind about getting in better shape, I take the subway up to Washington Heights and ramble around. The hills can be occasionally challenging, though I’m not quite old or infirm enough to huff and puff after scaling a hill (that comes if I have to run a couple of blocks). Exercise, it seems, always exhausts me.

I was puttering around the streets surrounding Yeshiva Unversity, on the quiet uptown avenues of Audubon and Wadsworth, when it occurred to me that I should get some photos of an unknown alley that had been on the edge of my consciousness for years but which I’d only visited once, and so I headed east on West 186th and found… 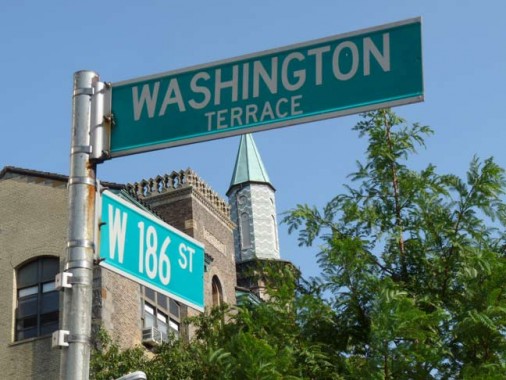 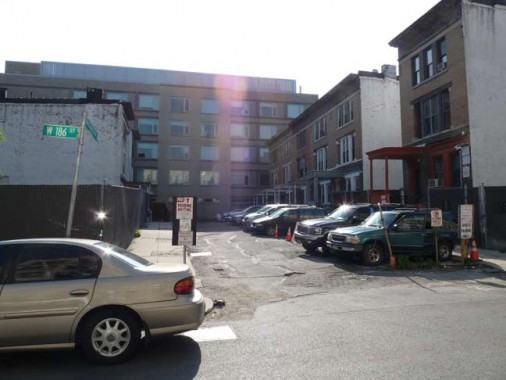 … a somewhat ramshackle dead end lined on both sides with 3-story brick buildings that appear to have seen better days, though all are occupied and no doubt the residents keep up the interiors as best they can. 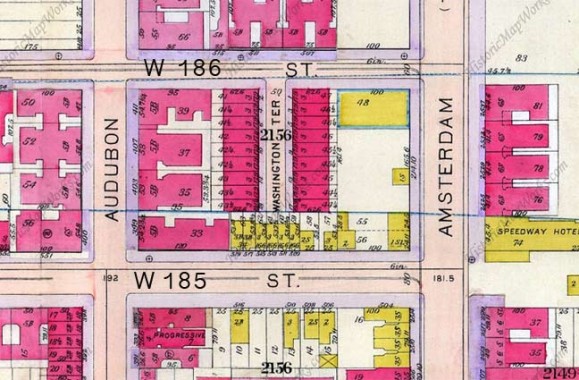 The terrace appears on this 1909 G. W. Bromley atlas plate.

Most such alleys in upper Manhattan and the Bronx were real-estate developments. The land was purchased in 1898 by Bayonne builder Daniel J. Murphy, who built 18 modest brick dwellings with exterior porches that were completed by 1900. Murphy had to foreclose on his properties after that, but continued to live at #18 Washington Terrace. (Since so many other streets in NYC are named ‘Washington’ you wonder why it wasn’t called ‘Murphy Terrace’ but we can imagine he was of a patriotic bent.) In the 1980s five of the homes were abandoned and the terrace became an eyesore, but it seems to have stabilized since then. 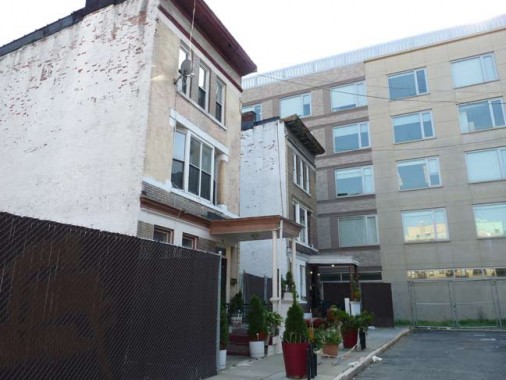 The Yeshiva University library can be seen at the end of Washington Terrace. 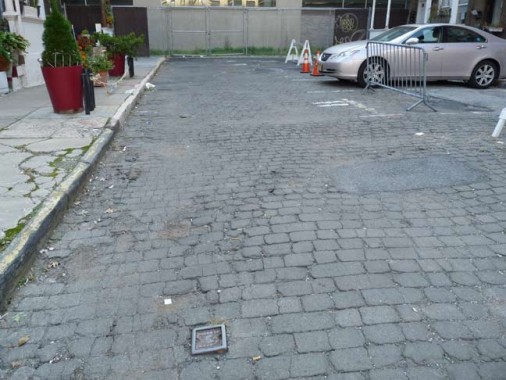 The terrace boasts flat brick paving that is somewhat different from the larger bricks used for “Belgian-block” pavements. 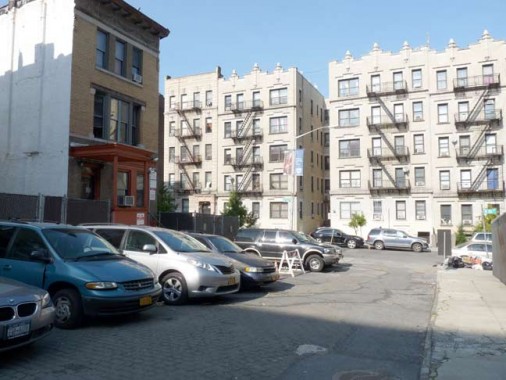 Looking toward East 186th and a facing apartment building.

WEST 16th AND 17th from 7th Avenue to Union Square

Are you sure those houses with the graffiti aren’t abandoned?

It’s a pity to see the sad condition of the buildings on Washington Terrace. The apartment houses on West 186th Street just opposite “the terrace” seem to have survived over 100 years old in what appears to be good condition by way of your photo. Those buildings appear exant on the 1909 G.W. Bromley plate as well, giving credence to their existence in 1909. I also happened to check the Google map street view and every building on West 186th Street between Aududon and Amsterdam Avenue is still standing when compared to the 1909 map plate (with the exception of the building that once stood at the southeast corner of West 186th Street and Amsterdam Avenue), and all are in good condition. I don’t know what the future holds for Washington Terrace, as it appears little by little that the brick row houses have been torn dowm to make way for additional parking (atleast on the east side of the street) for Yeshiva University.

For a minute I almost didn’t think this was in Manhattan especially since this scene looks like something you would find in the outer boroughs except for Staten Island, though upper Manhattan does share similar characteristics to them at times.

I used to work at Yeshiva U. in the 80’s, at that time all the bldgs were occupied and in better shape. YU kept trying to evict the tenants (they might have been the landlords). The tenants fought it and maybe won. YU wanted to expand their parking lot and library, and in my opinion ruin that quiet oasis.

I didn’t know that this area of Manhattan EVEN existed. Thanx Kevin.

My grandparents lived in that neighborhood, so we’d walk by that terrace on occasion in the late 1960s and early 1970s.

I was always puzzled by it as a small child, and saddened that it was in considerable disrepair at the time — sealed up, dirty, and abandoned buildings. I wondered about the block’s residents.

I hope things are better for the block and its denizens now, although the Yeshiva Library has replaced the parking lot that was behind it…that must surely cut off sunlight on the street.

I lived at 15 Washington Terrace from September of 1968 to around July of 1972, while I attended City College of New York. This was the second from the last house on the left hand side of the “alley”. Looks like it is one of only two remaining houses on that side of the street. My sister and brother-in-law allowed me to stay there for college. The house had been in my brother-in-law’s family for years, and he grew up there. Without this offer, I don’t know how I would have gone to college. I had no money. In my earliest years there, I would hear someone from the other side of the alley playing the violin. Also, possibly at the same house, a dog would come out of a window and sit on top of the little porch above the stoop. There was a tiny deli diagonally across the street, on the north side of West 186th Street. It was run by two Greek men, brothers, I think, and there was sawdust on the floor. I would buy four quarts of milk there, which I mixed with Carnation Slender packets. These shakes were the main part of my diet. About five years ago I was walking the neighborhood with a friend, and I actually knocked on the door of 15. It was then (and maybe still is) inhabited by some young people, kind of like a frat house. I told the young man who answered the door that I used to live there, and he invited me in. There were some changes, some sheet rock panels put up, but much was the same. It was a sweet and evocative experience to go to the house again, some forty-one years later. I will always be thankful to my sister and brother-in-law for putting a roof over my head, and I will always have fond memories of Washington Terrace. Such a new world for a small-town kid – roaming up and down St. Nicholas Avenue, riding the 101 bus and the No. 1 train to 181st Street, going to Woolworth’s and Grant’s. Who remembers these stores now? So glad I found this post, and thanks for the 1909 map.

Just an update to my previous post. Looking at the photo again, it looks like No. 15 Washington Terrace has been torn down since my visit of a few years ago. I now see that there is a space between the last two houses, where my sister and brother-in-law’s house once stood. It’s sad to think that my actual college home is gone, but my fond memories will always remain, along with my gratitude for being offered housing so that I could go to CCNY – a short bus ride down Amsterdam Avenue.

Was your sister confined to a wheelchair? I remember the couple who owned that house. The husband had a motorcycle and a Volkswagen wagon van. He would carry his wife to the van when they would go out. I was deeply touched by his devotion to her. I was just a kid in the 1960s but they looked pretty young to me.

Hello, Dolores O’Neill! So sorry for replying to you FIVE MONTHS later! I have not visited this wonderful website in a while. YES, that was my sister that you saw. Her name was Valerie, and she was eleven years older than me. Valerie was afflicted with Multiple Sclerosis in her mid-twenties. She had a cane, then crutches, and then the wheelchair. Despite her illness, she continued to work at an insurance company in midtown. Her husband would drive her to work in their Volkswagen. And yes, he had a motorcycle too. Before Val’s illness, she would ride on the back of the motorcycle, when they would ride all the way up to Putnam County to visit our parents.
Dolores, I would love to speak with you. Please call anytime at 212 724 1916, or email me at judyaccurso@nyc.rr.com.
Thank you so much for your comments!

Judy and Dolores, thank you for your amazing stories of this fascinating little block…it’s a great piece of New York history and trivia.

Hi Judy,
Thanks for sharing your story! Always interesting to learn about the history of the neighborhood here. I currently live at 15 Washington Terrace. It used to be a frat house as you said, but a couple years ago became a dormitory for a new special needs program at Yeshiva. I’m the dorm counselor there. I’m not sure if there was a middle house that was knocked down and also used by the frat, but I never heard anything about that (though I’ve only been here since 2017). I just know that #15 is currently the last house on the block (bordering Yeshiva), and that it used to be the frat house. It’s possible there was a middle house that was also used by the fraternity, or maybe the numbers changed or something. In any case, you’re welcome to come by and visit again if you’d like (just say elliot said so if I’m not there).

Hi Elliot!
I haven’t visited this site for quite a while! Here it is, just over a year since your comment. Better late than never! I truly appreciate your post, and I will try to track you down through Yeshiva University. Are you still the dorm counselor? Maybe you are correct in speculating that the numbers have changed. I can tell you that when I lived at 15 Washington Terrace, it was the SECOND TO THE LAST house on that side of the street. Please call me anytime at 212 724 1916, or email me at judyaccurso@nyc.rr.com

Judy, hello from August of 2022. I stumbled upon these comments because 15 Washington Terrace is currently for sale, it’s interesting to see inside and wondering how much has changed for you! the house across the street is for sale as well.

I am looking at a 1940 Census. My great-great-great grandmother is listed at the address 108 Washington Terrace in Manhattan. My grandmother told me she made costumes for showgirls. The woman who lived at 103 Washington Terrace, Farita Falcone is listed as being a showgirl in a nightclub. It’s a shame the buildings are in such rough shape. Sounds like it was an interesting place to live in the 40’s.

My family owned 16 Washington Terrace since around 1904. My father and his siblings grew up there. Then me and my siblings. It was beautiful until Yeshiva University bought people out and is letting it fall to ruin piece by piece all for a parking lot! A piece of the O’Neills will always reside there!

I lived at 17 Washington Ter from a toddler until I was 6 years old. We moved to NJ in 1978. I remember the “Matriach” Ms Ellis and her daughters. And there was a nice guy that lived next door that owned a VW van. I went back to visit 3 years ago and was sad that the house was gone. Bought back some fond childhood memories