WEST 16th AND 17th from 7th Avenue to Union Square

December 2013: I was in the Chelsea area running some errands the weekend before Christmas in a preternaturally warm spell that propelled the air temperature into the 70s (right now the forecast calls for between zero and ten the morning after New Year’s) and went down both East 17th and then West 16th as far as Union Square. A short walk, I know, and I will have to begin stretching these walks out again to the near 3 to 4-hour comfort limit to remain in some semblance of physical conditioning. A friend who comes on the tours sometimes routinely walks 20 miles within NYC confines. If I did that, my bones and tendons would turn to Jell-O®. 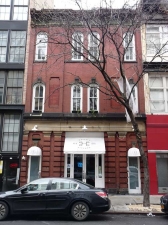 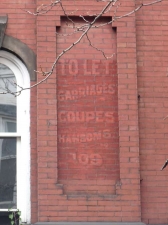 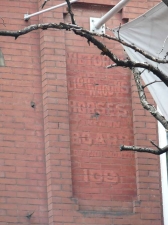 109 West 17th Street just east of 6th Avenue has been touched upon often both in FNY and over at Frank Jump’s Fading Ads. It’s a carriage house that possibly has the oldest samples of exterior lettering still extant in NYC. The building was constructed in 1869-1870 by a prominent businessman named Thomas Lord, who as far as I know has no connections to the British department store magnate Samuel Lord, whose Lord & Taylor clothing store spent some time nearby at Broadway and East 20th Street. The building was originally two stories, with the stables on the ground floor and living quarters and a hay loft on the second floor. The third floor was added in 1895 by the building’s third owner — the arched window treatments were almost identically replicated.

The building was always used as a stable and for boarding horses by a succession of owners at least until the early 1900s. Alliance Paper and Twine occupied the building from 1918-1931 and then by Charles F. Wilson, a printer’s supplies dealer, who remained until the 1960s. Until at least the 1980s, lower 6th Avenue had been a paper supplies wholesaling mecca as well as wholesale shoes and socks district, all this coming after the great Ladies’ Mile emporiums had scattered uptown. Beginning in the 1980s, they returned, and Bed, Bath & Beyond, Men’s Warehouse, Old Navy attract thousands on weekends. One notable failure was the Barnes & Noble Books, which largely succumbed to Amazon and Kindle.

OK, the painted sign panels. There are two of them on the second floor, with one saying

and the other one,

HORSES
TAKEN IN BOARD
BY THE MONTH.

Both panels feature the address number, 109.

A carriage you’re no doubt familiar with, as those are the rigs that (so their advocates claim) overworked Central Park horses drag around in romantic rides through Central Park. A coupe (spelled with an accented E and pronounced koo-PAY in French) was a four-wheeled, horse-drawn carriage that was based on the larger coach (familiar from the western movies) but smaller and lighter; a hansom was a lightweight horse-drawn carriage invented by British architect George Hansom, light enough to be pulled by one horse.

On the other panel, a victoria was another carriage, but more luxurious and stylish. They were invented in France in the mid-1840s and imported to Britain in the 1860s, where they were nicknamed for Queen Victoria.  Wagons were used to transport heavier materials and were pulled along by teams of horses or oxen. Lighter wagons were used to carry lighter materials.

I’d guess these signs are from the 1880s into the 1890s. There’s a certain swashiness (curved lettering) seen in those decades that you don’t see on 1860s and 1870s signage. It’s truly remarkable they’ve survived, as any of the building’s owners might decided to paint them over, but haven’t … yet. 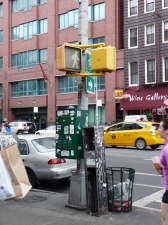 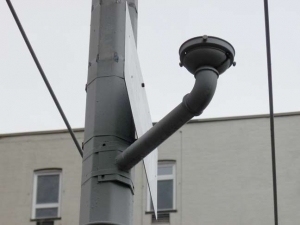 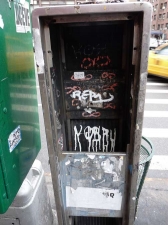 A few years from now, if they don’t already, most New Yorkers won’t know what these objects are, at West 17th Street and 6th Avenue. They were actually used to fight fires. The metal object on the sidewalk once had a fire and police alarm mounted at the top — if there was a fire or criminal activity you pressed a blue button for the cops and a red button for the FDNY. There are still thousands of functional fire alarms around town, many of them ornate stanchions dating all the way back to 1913. However, when one is decommissioned, the stanchion is left in place — just in case they ever want to activate them again. This is actually one of the newer models, going back to 1972 or so.

The bracket on the lamppost was used, of course, to hold the orange lamp that once called attention to the alarm. Newer alarm light designs are mounted atop the lamppost luminaire, a small red light that is usually drowned out by the streetlamp. That’s progress. 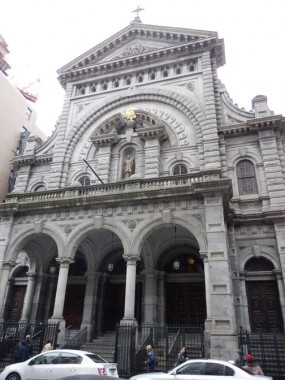 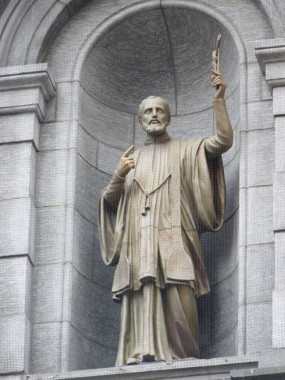 Francis Xavier (1506-1552) was a Spanish-born Jesuit missionary who did extensive work in the Far East, in India, Japan and Indonesia, spreading the Gospel into countries that were still largely a mystery to Europeans at the time but were part of the Portuguese colonial influence.

This imposing edifice was completed in 1882, on the site of an earlier St. Francis Xavier’s built in 1850. Founded by Father John Larkin, a Jesuit, and named for the Jesuit saint. Father John Corridan, the mob-fighting priest who inspired the film 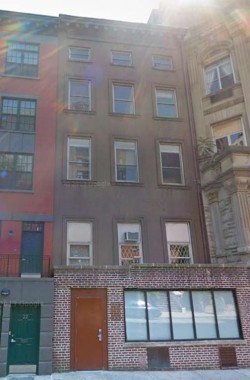 The church is on the same block as a landmarked row of 1845 Greek Revival townhouses, as well as #41 (left), where Canadian-born songwriter Joni Mitchell wrote “Chelsea Morning,” a song Hillary Clinton liked; and #24, where editor of the New York Evening Post William Cullen Bryant (1794-1878) resided for the last eleven years of his life. Poet Hart Crane also lived briefly in the building. 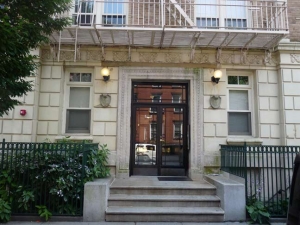 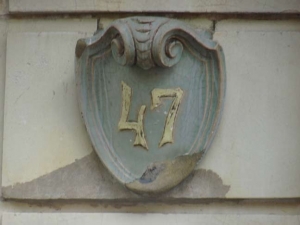 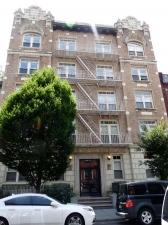 As soon as I passed it, I developed an unutterable fascination with #2 West 16th Street, a three-story Italianate townhouse built in 1852 by dentist John Lovejoy, according to the NYC Landmarks Preservation Commission report. Why? Well, there’s that rococo brownstone pediment above the front door; below it, the wrought iron house number (just a big “2”) on the transom; and the globular bannister newel on the front steps — the other one is missing. In 1864 the owner was banker and NYC Parks Commissioner Henry J. Stebbins (in a typical Forgotten NY association, I recognized the  name from the Bronx’ Stebbins Avenue in the Crotona Park area– even though most of it was renamed for a local preacher, the Rev. James Polite.

It was divided into apartments between 1905-1910 and a back house, invisible from the street and accessible from West 15th, was built in 1926.

With little alteration from its 1852 construction, this is a throwback building on this block for sure. 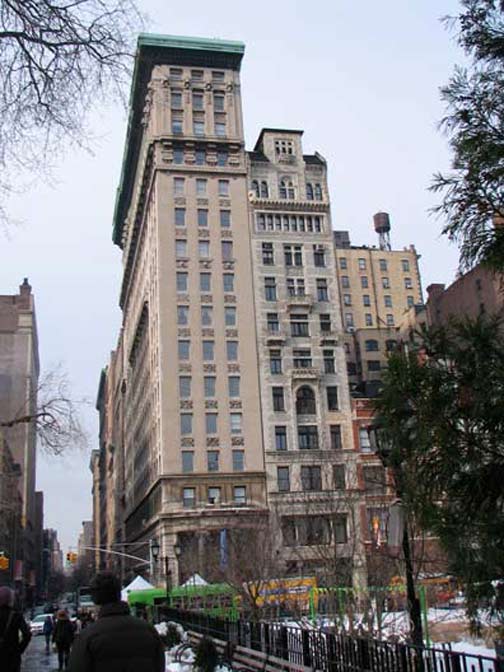 Heading east on 16th to Union Square, a pair of buildings from the dawn of the skyscraper era can be best seen from the square. On the left is the slivery 1903 Bank of the Metropolis Building (Bruce Price, architect) that is actually wider on the 16th Street side. The bank was founded in 1871 and was absorbed by the Bank of Manhattan in 1908, just 5 years after the building opened.

Immediately to the right is the Decker Building, completed in 1893 by architect John Edelmann, an associate of Louis Sullivan. The Moorish-style building was the home of the Decker Piano Company when it opened, replacing an earlier Decker Piano building. This was home to the second location of Andy Warhol‘s Factory between 1968-1974; it was here that a disturbed Valerie Solanas shot and wounded Warhol June 3, 1968 — she thought he had stolen a screenplay of hers. 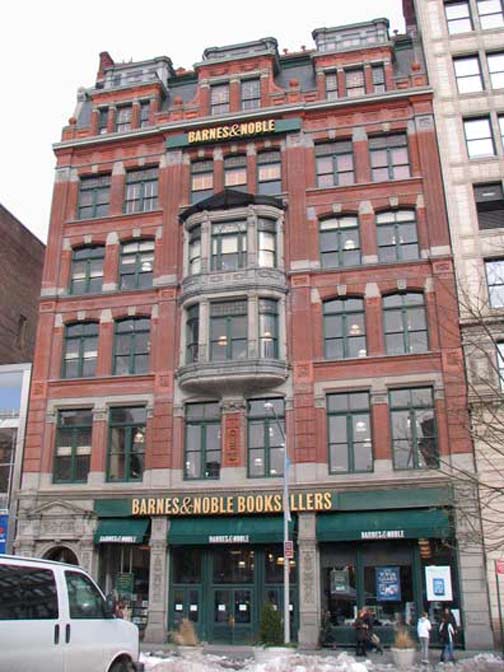 On Union Square North (East 17th Street) is  the red brick Queen Anne-style Century Building (1881, architect William Schickel) originally home to The Century Magazine and St. Nicholas Magazine for children (which, oddly enough, I remember from seeing reprints of it in the library as a kid). For almost 20 years it has been home to a branch of Barnes and Noble booksellers, and continues in that role as of December 2013. 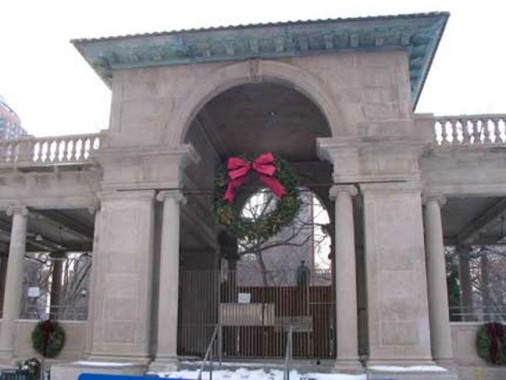 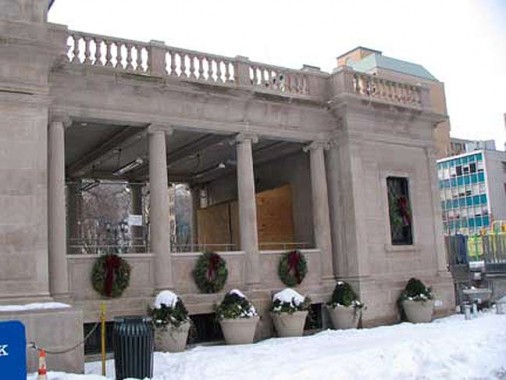 Union Square’s north end limestone arch, flanked by two Ionic-columned pavilions, was built in 1929. Though the south end of the park is now where most demonstrations take place these days, the pavilion has historically been the site for marches, sit-ins and protests through the years. Plans are afoot to make the pavilion the centerpiece for an upscale restaurant, and though the plans have been around for 5 years or so, nothing has happened yet.  A new playground opened adjacent to it in 2009. 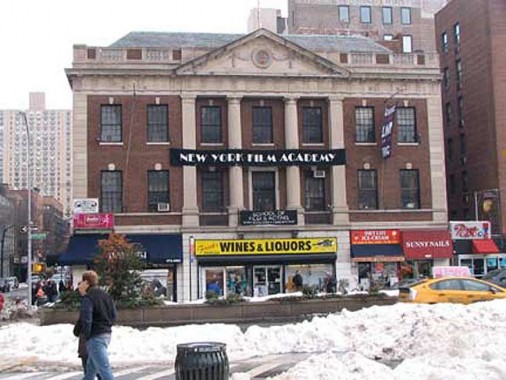 At Union Square’s northeast end, East 17th and Union Square East, is the last version of Tammany Hall, constructed in 1928. Tammany Hall was an organization associated with the Democratic Party that dominated NYC politics for about a century, from the 1830s through the 1930s. The name was a bowdlerization of the name of a (likely fictional) Indian chief. A film school, New York Film Academy, now occupies much of the building. 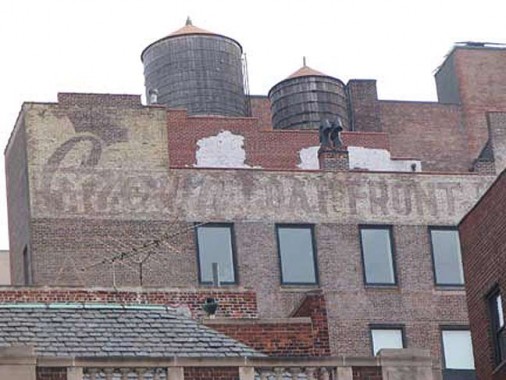 On East 16th, a wide painted ad advertises Crown Coat Fronts (out of the picture to the right, a smaller sign says ” Mftr’s of Civilian and Military Coat Fronts.” According to Walter Grutchfield, the company was here between 1947 and 1958. “Coat fronts” were a”trade term for a built-up stiffening or shape-retaining interlining for the fronts of coats, made of stitched layers of haircloth, felt and canvas.”

Look closely at the left side of the Crown ad, and you can see that the paint has worn off sufficiently to allow a glimpse of the painted ad that preceded it, for Hyman and Oppenheim Human Hair Goods.

At this point my walk ended at the subway station. However, check NYC’s premier architecture writer Christopher Gray’s 2007 article on West 17th between 5th and 6th Avenues.

Kevin: A VERY HAPPY NEW YEAR TO YOU AND ALL FORGOTTEN FANS EVERYWHERE!

Kevin. Happy New Year to you as well. You give so much to all of us all year long.
I am looking forward to all the things you will share with us in 2014 about the forgotten NY.

Father John Corridan, the mob-fighting priest who inspired the film … Kevin, you omitted the rest of the sentence, but we know the film was “On The Waterfront”. Happy New Year and hope you have your new computer set to back-up regularly!