While walking up Park Avenue South from Union Square, you’ll notice this painted sign on the right gradually coming into view. It’s on a building in the corner of East 27th Street. If you’re new to NYC, you may wonder why the Fourth Avenue Building is on Park Avenue South — especially since 4th Avenue runs only between Cooper and Union Squares.

It turns out that the whole length of 4th Avenue, Park Avenue South, and Park Avenue in Manhattan was once called 4th Avenue. Politics and railroads pretty much are the reason why three avenues now fill the duties of one, and it’s explained in detail on my 4th Avenue Street Necrology page. 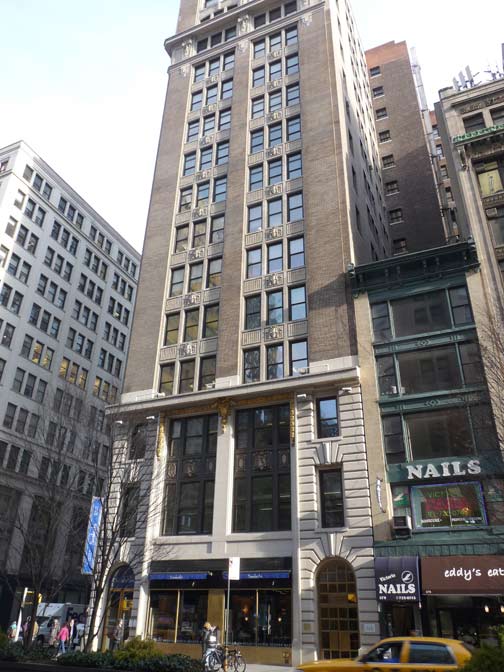 More properly called 381 Park Avenue South, the slim and trim 1905-era building boasts gilding as well as modest embellishments like cartouches between each floor. It has, of course, been converted to expensive apartments. From the building’s website:

In 2003, on the facade of 381 Park Avenue South, over 500 pieces of terracotta were replaced with GFRC casts virtually identical to the originals. Complex fan arches, fluted spandrels, sills, jambs, lintels, ornate columns, and decorative urns were completely replicated in modern materials.

The owners do have a sense of history, as the large “Fourth Ave. Building” sign on the south side is periodically repainted.

In the 70’s, wasn’t this building used by Baruch College for classes? If it wasn’t this building, it was a very similar building on PAS. The top floors were class rooms and had dedicated elevators which took forever. Many times I would walk down rather than wait for the elevator.

As an out-of-towner doing genealogy research, I had wondered what became of Fourth Ave., since I couldn’t find it on new maps, yet is was on old ones. This is helpful in piecing things together. Thanks. Nice photo.

I want to thank you for your comprehensive history of 4th Avenue. It’s really amazing what happened to this thoroughfare of NYC, or avenue over the years and how it was systematically dismantled and changed for all the above-mentioned reasons. Few if any New York citizens either realize or know about it, but I find it fascinating. All your articles are. Thanks for creating and sharing this and other fantastic New York historical accounts for those of us who do care. Our city has had quite an amazing history in the years since its founding and this site “Forgotten New York” brings it all to light and to life !!!

So glad to have found this piece of information. Can you tell me what business was conducted here in the 1940s? I am hunting down information on one of the people who worked in this building during that time.

I am also interested in the use of this building in the 1940s. I fairly sure my grandfather worked for a business called Help Feet at this address. Would love to learn more. Thanks. Please email me at Kathy.kelenski@gmail.com. Thanks!