I was walking up Henry Street in the Lower East Side recently, taking photos for a future examination of the street, when I encountered a Forgotten NY treasure that I have known about since I began shooting photos all over town in 1998. It’s a short, two-block alley tucked along the west side of the Manhattan Bridge approach … 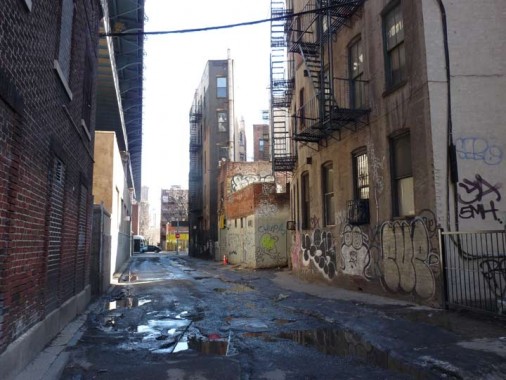 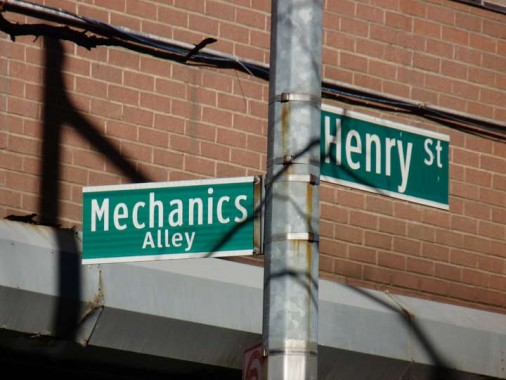 A forbidding place, actually, which looks like mugger central. (As you will see I did not bother walking on it.) The name of it is Mechanics Alley and the Department of Transportation has gone so far as to install a new sign in the fairly readable Clearview font. It begins at Henry Street just east of Market Street and runs two blocks southeast to Monroe, though it’s marked only as far as Madison.

However, I’ve found that this isn’t the same Mechanics Alley that was there in bygone days before the bridge was built. There was indeed a Mechanics Alley in the vicinity, but it wasn’t this one.

A bit of history: the older Mechanics Alley likely wasn’t dominated by machinists and repair shops, as would come to mind with the word ‘mechanic.’ Many older East Coast downtowns have short streets or alleys named “Mechanic” — look at all the listings on this wikipedia page. These days ‘mechanic’ means anyone who repairs machinery but in a previous era, it also included the sense of ‘skilled artisan.’ A Mechanic Street would be found in a part of town containing tradesmen, shopkeepers and also repairmen. The many “Mechanics Institutes” in cities such as San Francisco use the word in that sense, as does the General Society of Mechanics and Tradesmen on 20 West 44th Street in midtown.

Why isn’t this the ‘older’ Mechanics Alley? 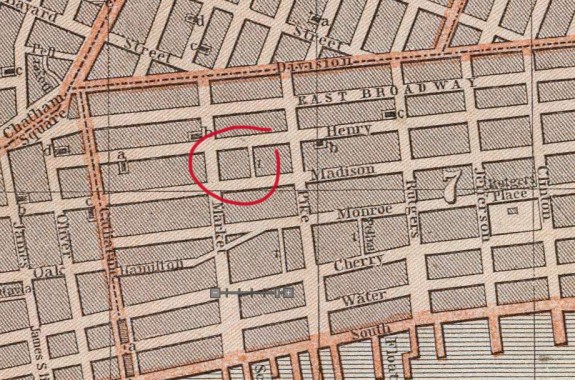 This 1842 map shows a short alley between Henry and Madison east of Market (circles) and a second alley south of it, between Monroe and Cherry. In 1842 these streets had just recently been laid out. Some houses, marked a, b and c, are also shown. 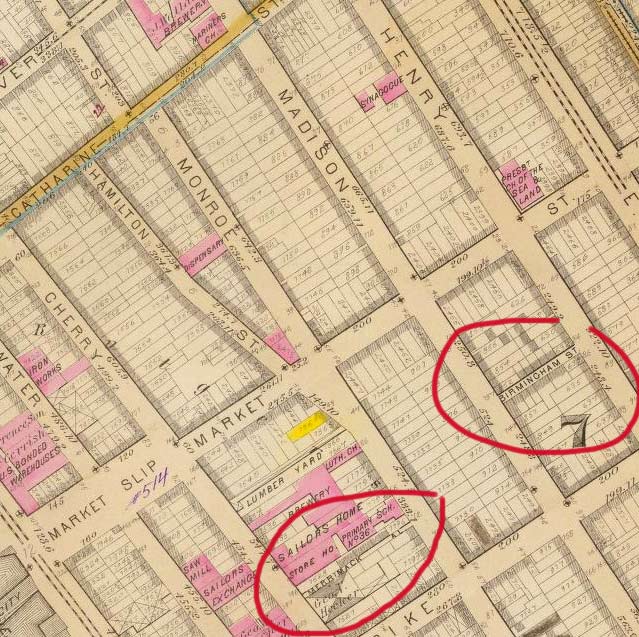 By 1879 these two alleys had been given names. Note that the one between Henry and Madison is named “Birmingham Street” and the one between Monroe and Cherry is “Merrimack Alley.”

Now, this is the only place I’ve seen a reference to a Merrimack Alley. The two sources I trust, Kenneth Dunshee’s book “As You Pass By” and Gil Tauber’s website Old Streets don’t mention a Merrimack Alley at all. There may be a reason for that, as you will see on the next alley plate. 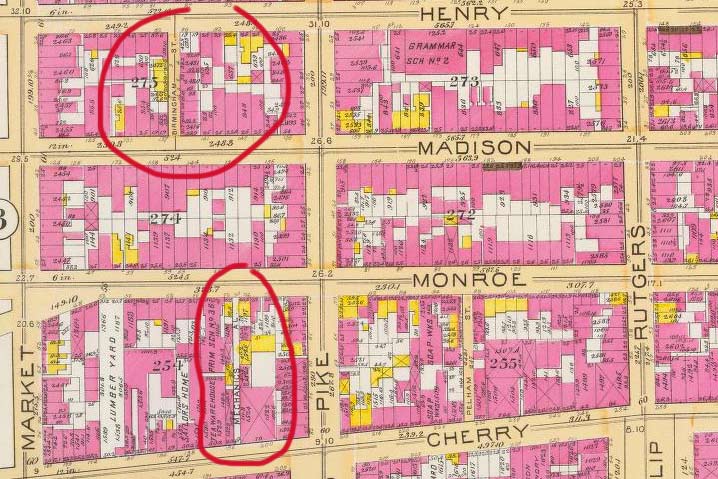 By 1891, the two alleys are still there, and a third, Pelham Street, is also in place. But Merrimack Alley had changed to Mechanics Alley.

Or had it changed? In the 1800s records were often kept by hand, sometimes in elaborately scripted and ornate cursive hand. It’d be easy to substitute one word for the other. There is an instance of this on record in Brooklyn, in Williamsburg where many of the streets are named for signers of the Declaration of Independence. One street, McKean, had its name forever changed to Keap when some cursive handwriting was misinterpreted. It can happen everywhere. I think this alley was always named “Mechanics” and not “Merrimack.”

By 1915 the Manhattan Bridge approach had ben run through the area, condemning a lot of houses. Birmingham Street has evaded destruction, though, on the east side of the bridge between Henry and Madison. Mechanics Alley, to the south of the image between Monroe and Cherry, wasn’t so lucky and was right in the path of destruction. 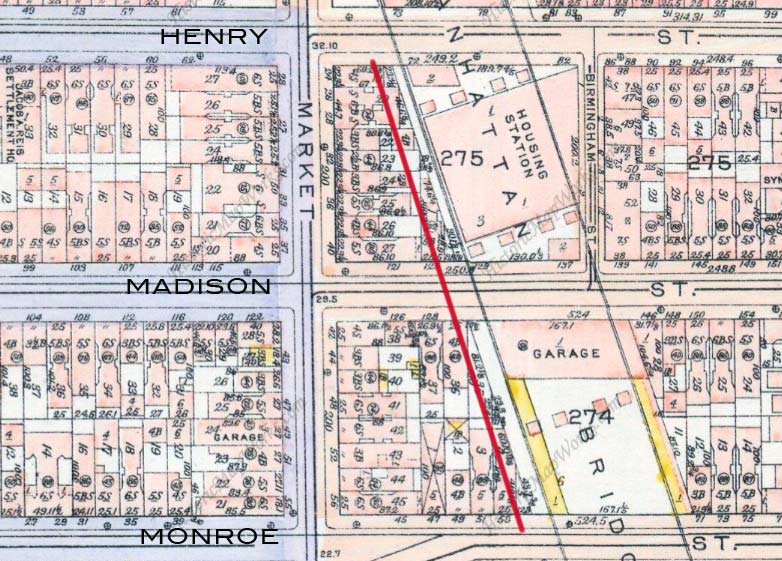 This 1925 plate shows the present-day Mechanics Alley alignment: I’ve set off in red a bare spot along the west side of the bridge that runs for two blocks. A couple of decades ago, the DOT apparently decided to sign this “Mechanics Alley” apparently in tribute, or homage, to the older alley between Monroe and Cherry that the Manhattan Bridge had destroyed. 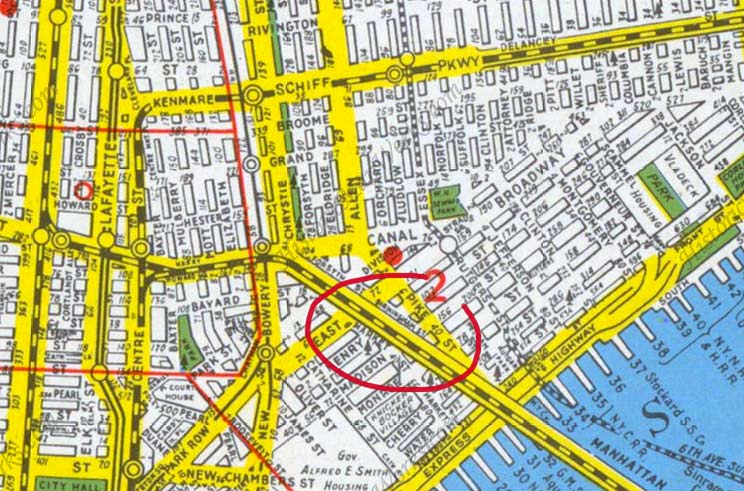 Turning our attention to Birmingham Street, in 1949 Hagstrom still listed it as a short street running from East Broadway southeast to Madison Street.

In his site Manhattan Past, Don Rogerson states that Birmingham Street had its name changed to Livingston Place in 1954. The street was then closed in 1962 when a parking garage was built in its place. 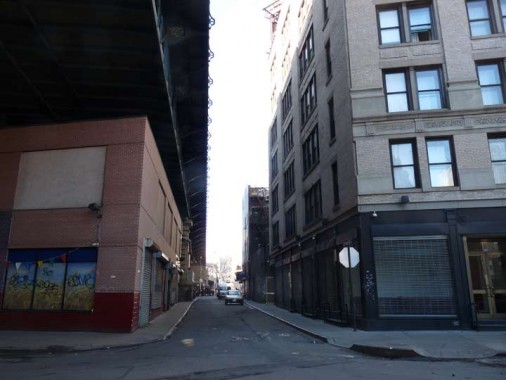 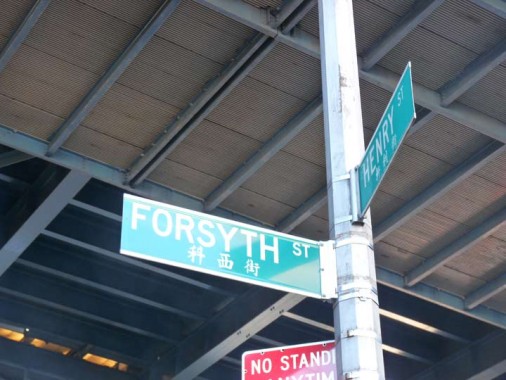 There is a short street running along the east side of the bridge, ending at Henry Street. The DOT signs it as a southern extension of Forsyth Street. 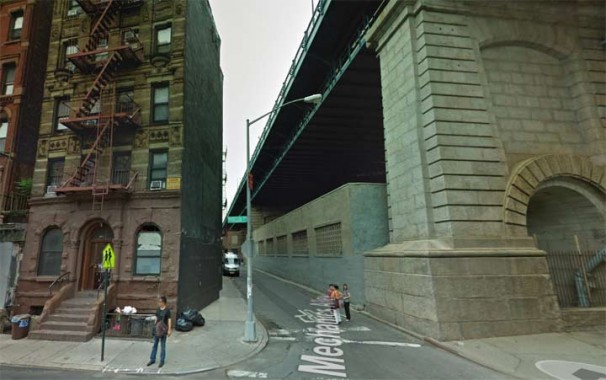 Amazingly the Google Photo Truck, or perhaps a handheld camera, has traversed the length of the “new” Mechanics Alley. Shown is its intersection with Madison Street and a Manhattan Bridge stanchion. 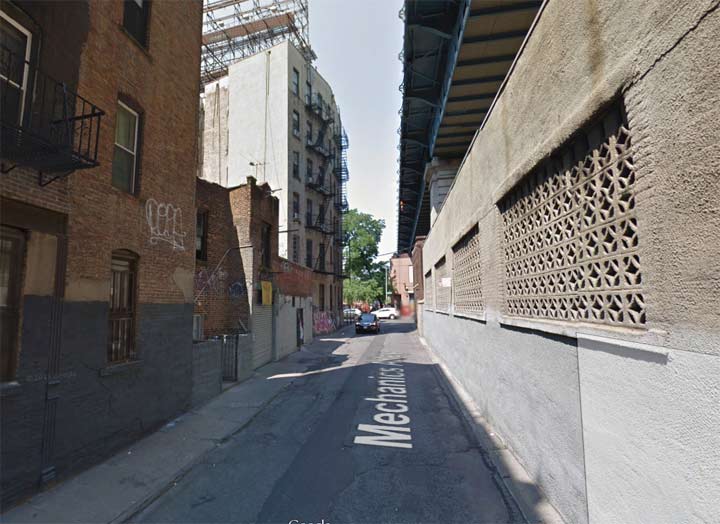 Looking north along Mechanics Alley from Madison toward Henry. 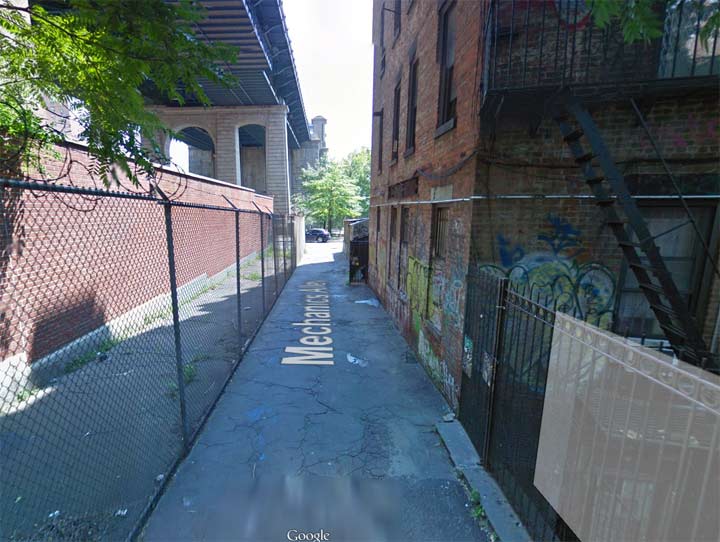 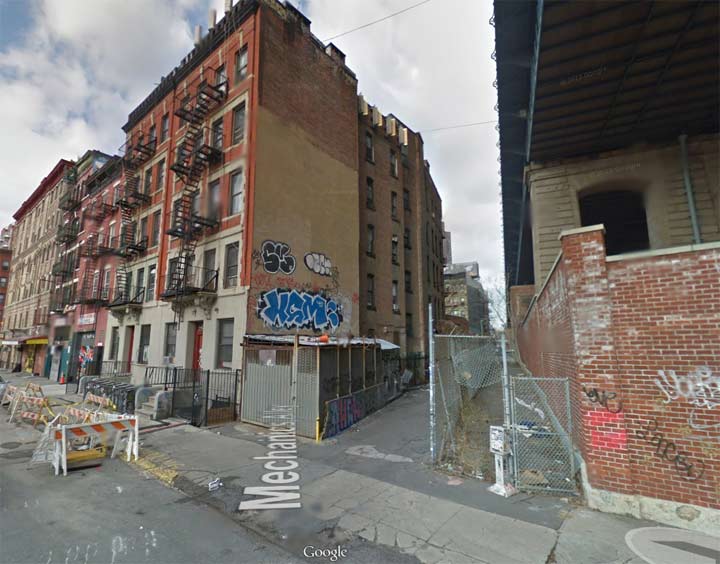 Mechanics Alley at its southern end at Monroe Street. 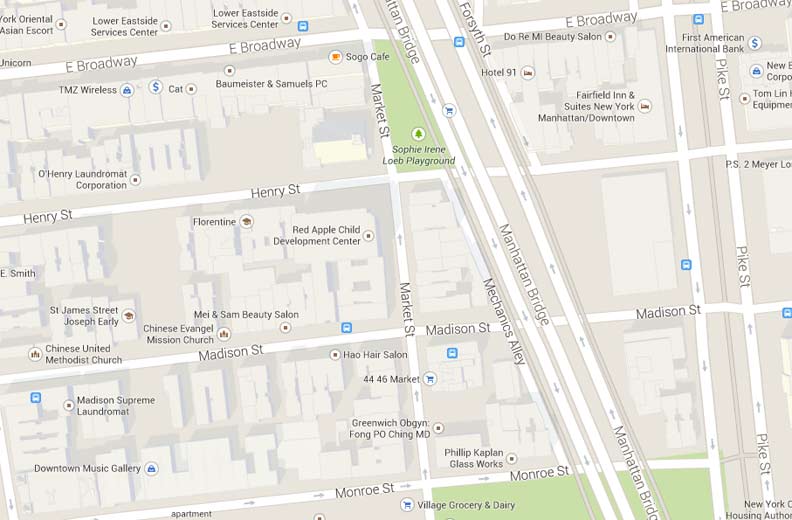 THE NAMES OF THE NEIGHBORHOODS OF THE BRONX

Very interesting article. I had no idea that Keap Street in Williamsburg, Brooklyn had originally been named McKean Street, and was subsequenty mistakenly rendered Keap Street due to a misinterpretation to someone’s cursive writing. Personally I find this is very interesting, as one of my great grandfathers had purchased his first home on Keap and South 3rd Streets upon emigrating to the US from Lithuania at the turn of the century (from the 1800s to 1900s), and I’m sure no one in my mother’s family was ever aware of that information.

I think you’re probably right about “Merrimack Alley” being a misreading of “Mechanics”.

I know of at least one other instance of this happening – In John Post’s “Old Streets of New York” he mentions that a portion of Mulberry Street was once called “Mustary”. This, I think, is a misreading of the script on the Maerschalk Map published in 1755 that shows the lower part of Mulberry street (a portion now closed) as “Mullbarry”. The looping L’s and B in the script make “Mustary” appear to be a reasonable reading of the lettering. Spelling was not consistent during this period (near Mullbarry on the same map is Orenge Street) and one of Post’s intentions in writing about the old street names was to allow the other lawyers of his day to match streets mentioned in old deeds and property descriptions with the modern streets. It is likely he ran across the name “Mustary” in old documents. One imagines a bespectacled clerk squinting under the light of a candle or oil lamp, trying to copy out street names from a hand-drawn map.

Terrific article Kevin! I grew up in this neighborhood in the 1950-60’s and that sliver of a “street”/alley way was a place that, as kids, we would avoid like the plague. It was not uncommon to see vermin occupying that area back then.

Great research (as always) that you do in digging up the historical perspective of this part of lower Manhattan.

There was an unnamed alley that ran between Cherry Street to Water Street that was alongside the Manhattan Bridge anchorage and in a line with Mechanics Alley. It was demapped when Murray Bergtraum field was built.

Hi,
Can you tell me if this is Mechanics Alley? I took this photo in 1983 when I was a photo student at SVA. I know I walked through this area but I’m trying to verify the exact location of the photo. Thanks for your help.

No way to tell…

I am a WWII baby. Was born & raised at 22 Pike St. and Henry Street. In Mechanics Alley, there was a chicken market. My sister and I would go there once a week to pick out and buy 3 chickens. They would be butchered, cleaned and wrapped while we waited. Until this day I cannot endure that smell. It was a nasty street to walk down but never dangerous. Many residents used the alley to cut through to Madison St. to Gene’s Pork Store for sausages then to Ruggerio’s or Moltasanti’s for bread. Savoia’s bakery on Catharine St. for cake and the Deli on Catharine between Madison and Monroe St. This was done every Saturday.

Love the history. So much the city has changed. Thank you for the memory.

Very interesting article. I am doing some genealogy research, and I discovered that my great grandparents lived on the streets you mention specifically. The 1870 Census cited that their dwelling number was 46, and they were located on Monroe Street between Mechanics Alley and Market Street. Your assessment that “Merrimack” was most likely “Mechanics” Alley is most likely correct.
Thank you!

this is where the wutang and onyx video was shot