I’m perhaps late with this one, but word recently trickled back to me that a Forgotten New York favorite, the Avenue H stationhouse, had had a makeover, after it survived a date with the wreckers’ in 2002. It was  given landmark status by the NYC Landmarks  Preservation Commission in 2004, and relieved by its reprieve, I promptly forgot about it. 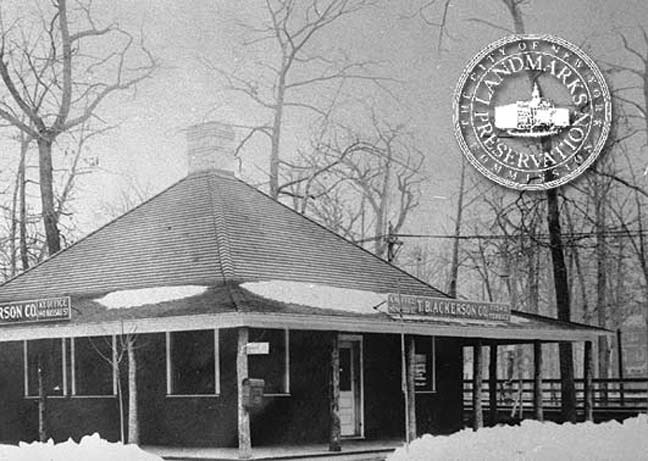 The present B/Q line tracks between Prospect Park and Brighton Beach were originally a part of the Brooklyn, Flatbush, and Coney Island Railroad, which ran between Prospect Park and the Brighton Beach Hotel beginning in 1878. It became a part of the Brooklyn Rapid Transit Company (BRT) by 1900. The station house had been the Thomas Benton Ackerson Co. real estate office for Fiske Terrace, the attractive development of houses running north from Avenue H. The Avenue H station opened in 1907 after increasing population in the area necessitated a new station; it is the only such station remaining from the time when steam trains plying the Brighton Line ran at grade. Brooklyn Rapid Transit built the open cut, which runs between about Avenue H and Prospect Park, between 1905 and 1908, and streets were cut through in the subsequent decade.

In his excellent article about the stationhouse, my ex-web host, Paul Matus, quotes the LPC’s Eve Kahn:

“The Avenue H station on the BMT line […] is the city’s only shingled wooden cottage turned transit station house. Often compared to a country train stop, it originally served as a real estate sales office for developer Thomas Benton Ackerson to sell property in the adjacent neighborhood of Fiske Terrace, an early twentieth century example of planned suburban development. The structure, with a hipped and flared roof and wraparound porch, evokes in miniature the area’s Colonial Revival and Queen Anne houses. After nearly a century of commuter traffic, the Avenue H station remains in service and retains much historic fabric, from a corbelled chimney to peeled log porch columns. It is one of a very small number of wood-frame station houses surviving in the modern subway system, the only station adapted from a structure built for another function, and the only surviving station from Brooklyn’s once-extensive network of surface train lines, which had originally attracted Ackerson and numerous other developers to the area. […]

“The Avenue H Station House is a one-story wood-frame building clad in wood shingles with a hipped pyramidal roof supported by a wide portico of historic chamfered wood posts that form a wraparound porch,  which originally had supports of peeled-log columns. Originally freestanding, the station house now abuts a brick apartment building on its south side. This façade remains partly exposed, and visitors allowed through the MTA’s locked gates there will find two peeled-log columns still supporting the porch (one painted white, the other a rustic brown). The roof is covered in nonhistoric asphalt shingles and has a central corbelled yellow brick chimney. The undersides of the extended eaves are clad in tongue-and-groove boards each  about two inches wide; a nonhistoric gutter has been added to the eaves. At the intersections of the walls and porch eaves, a band of simple ogee molding encircles the building.” 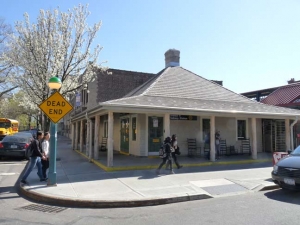 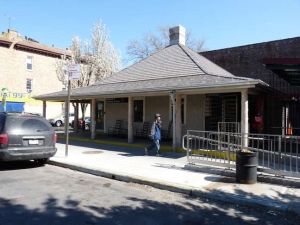 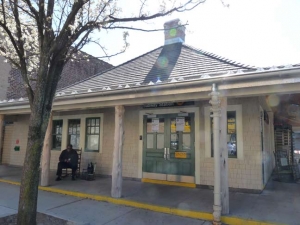 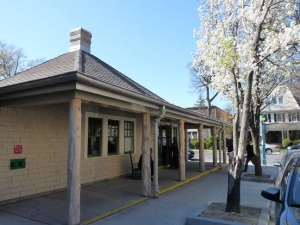 By 2010 the Ackerman station building was in danger of complete collapse, with a sagging roof and dangerously deteriorated wood floors. To shore up the roof, a tie rod with steel beams was installed. The wood floor was removed and a safer concrete floor was inatalled. The building was closed between late 2009 and the end of 2011 while the renovation was done. 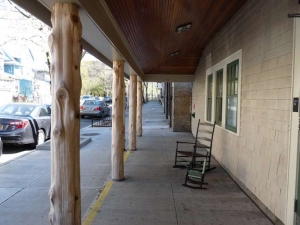 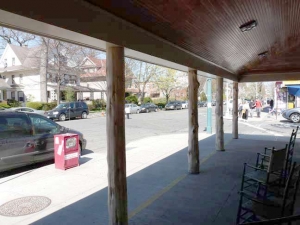 The wraparound porch was completely removed and subsequently rebuilt with the supporting columns again resembling the bare, peeled logs that were featured on the original. A neat touch was the introduction of Shaker-style, individually designed and painted  rocking chairs designed by local architect Ed Kopel, whose installation is called Brooklyn Bucolic.

Each original rocking chair, slightly different than the next, were hand carved in maple by JP Parnas Woodworking out of Massachusetts. Molds were made of every chairs’ element, followed by waxes, and eventually they were cast in bronze. The subtle bend of the chairs’ profiles up to the detail of the wood texture and lattice woven seats translated beautifully into metal. Polich Tallix Fine Art Foundry

Though the chairs are usable by the public, fear not — they are attached to the pavement and cannot be removed. 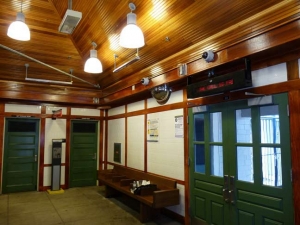 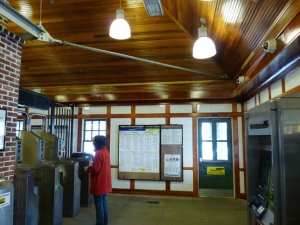 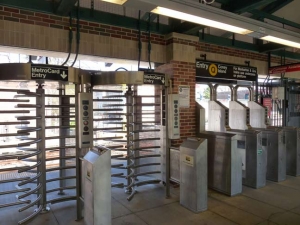 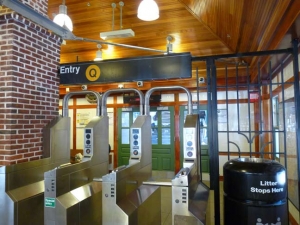 The real revelation is the interior of the stationhouse. Before 2010 the interior was plain-Jane with a neutral beige paint job and exposed meters and electrical boxes. The exposed chimney was given a brick covering, new lighting was installed and the ceiling received a beautiful finished wood ceiling treatment. Windows were reconstructed and a tile finish was built on the walls. The station now has the look and feel of a suburban rail station, which was its purpose beginning in 1907 after Ackerson Real Esatte vacated the building after all its properties had been sold. The station renovation was done as part of an overall rehab of the Brighton Line for the stations between Newkirk Plaza and Sheepshead Bay. New platforms, wind screens, lighting  and fare areas were built so that these stations are now state of the art for exterior MTA subway stops.

At Avenue H, the southbound side was not neglected. There had been no station house there previously, so a brand new one was built featuring a metrocard machine. The sole “token booth” remains in the rehabilitated Ackerman stationhouse on the Manhattan bound side. View of the shops on Avenue H from the southbound stationhouse. One of the old signs I remember is missing… 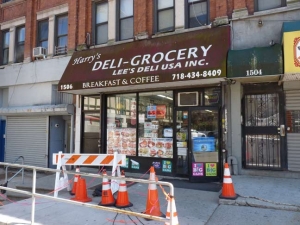 … as one of my favorite old signs for Nathan’s Food-o-Rama has been covered over by the Harry’s Deli awning sign. It might still be under there. 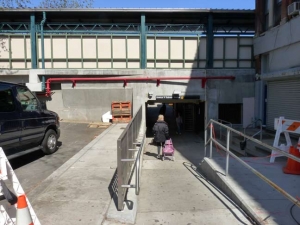 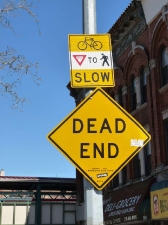 When I lived in Brooklyn and bicycled out to Midwood, the Avenue H station was quite valuable to me. Avenue H is interrupted for vehicular traffic for the Brighton Line, which is built on an embankment. While some avenues were depressed to go under the rail line, others such as Avenues H and I just end. However, there is a pedestrian underpass that is also used by bicyclists. I believe Avenue H is a city bikeway and the DOT has installed signs requesting bikes to slow down because they have to share the path. 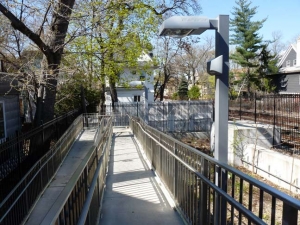 Even the station lamps have been updated. Platform lamps and handicapped ramp lights are bright white LED lamps while station indicators have been mounted on IND-type standalone lamps, which have been appearing with increasing frequency. A DOT Dead End sign has been hung on one of the shafts. The gold dome of Brooklyn College’s LaGuardia Hall can be seen looking east from the Ackerman stationhouse. The station house is located in the midst of a NYC Landmarks-designated neighborhood of Fiske Terrace. The area’s origins are also with T.B. Ackerson Realty:

In 1905, T. B. Ackerson Company purchased a densely wooded tract of land and immediately cleared it, laid out streets and installed underground water, sewer, gas and electric lines. Eighteen months later, the former Fiske estate had been transformed by some 150 custom-built, detached, three-story suburban houses with heavy oak ornamental mantels, staircases, beamed ceilings and built-in bookcases, ornately bordered parquet floors and elaborate cabinetry. A landscaped median and hundreds of street trees planted at the time of development continue to contribute to the idyllic feeling of the neighborhood. Historic Districts Council

THE OLD ONE WAY

The historical landmark status of Fiske Terrace is now under debate due to new photos from Mr. Brennan, and old Irishman that lived to thee mid 1990s that has photographic proof that the FDC and the community Board must rethink their historical status.

When I attended Brooklyn College, at night, years ago, I used to get off the Brighton local at Ave H and have a sandwich at a luncheonette nearby…..Beautiful neighborhood still

The only remaining Ackerson Realty is in Bay Shore, L.I. They were responsible for a few L.I. communities. Many family members still live in and around the area.

Great article and photos, documenting the history and preservation of a lovely suburban neighborhood in the heart of urban Brooklyn.

Community Board 14 is largely responsible for preventing the demolition of the building, supporting the landmarking and insisting that that station be restored rather than modernized. With the CB office just steps away, the project was monmitored daily. The Transit Authority fully cooperated with the Board throughout the long project..

As with any good thing the MTA does, from air conditioning subway cars, to buying articulated or alternate fuel buses, this renovation required a long difficult fight. If we left the MTA to do things on their own, this gem would have been demolished and we would all still be riding only 40 foot pollution emitting buses and riding in hot trains with fans.

I heard that the term “Dead End” is no longer politically correct.
The new term is “Street Ends”

I am just plain happy to see this little gem fixed up so well. I remember its sad days.

In that one photo it looks like they even have an old man sitting on the rocking chair! Standard for a country porch. Build it and they will come. Is he whittling something?

Great article. We’re very lucky to have such a lovely neighborhood. It is unusual in Brooklyn!

Great article. We’re very to live in such a beautiful neighborhood. It’s unusual in Brooklyn. Let’s treasure it.

Ackerson vs. Ackerman? I’m not missing anything, am I?

An interesting article about the brief reappearance of the Nathan’s Food-O-Rama sign: https://uni-watch.com/2018/12/27/signs-of-the-times-the-brief-rebirth-of-nathans-food-o-rama/

From 1959 to 1963 I commuted to NYU most weekdays. Living on Avenue I and East 13Street, I had the option of walking to the Avenue J station or Avenue H. When I had early classes I opted to walk down East 15th Street so I could stop at the “cut” to Wave at the engineer in the caboose as the morning freight rumbled by. Most days, he waved back.