There they stand on the Flushing Bay Promenade just north of Citifield… two odd fiberglass rain shelters that appear to me resembling the Vampire Squid, which has webbing between its tentacles that gives it a batlike appearance. (They also look like Sally Field’s “Flying Nun” headpiece.) These shelters are mostly unremarked upon by promenade bicyclists and strollers, but they are true relics — they were built for the 1964-1965 Worlds’ Fair and were retained after the Fair closed.

The shelters were researched by Paul Lukas, a pro sports uniform aficionado of Uni Watch fame both on ESPN and the proprietary Uni Watch site (and much earlier, the Beer Frame zine and Inconspicuous Consumption site which, among many other things, helped inspire FNY) and  architect Kirsten Hively. 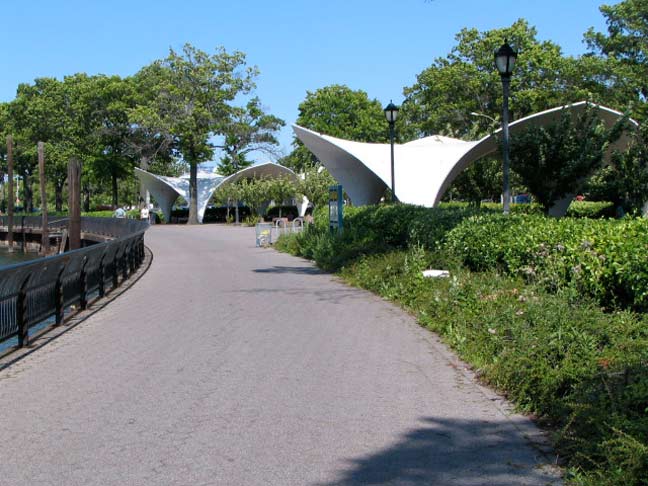 As it turns out there were originally three such structures placed aside the World’s Fair Marina, designed by architect Peter Schladermundt, who is also responsible for the Marina, which also appeared in its present configuration in 1964. They were originally exhibit spaces for riparian entities such as the United States Coast Guard, and had glass exteriors and sliding doors. After the Fair, all three were auctioned off to various bidders, one of which moved his “structure” to the Adirondacks. The other winning bidder only wanted the glass walls and left what were now reduced to shelters without the walls in place, where they sit today. 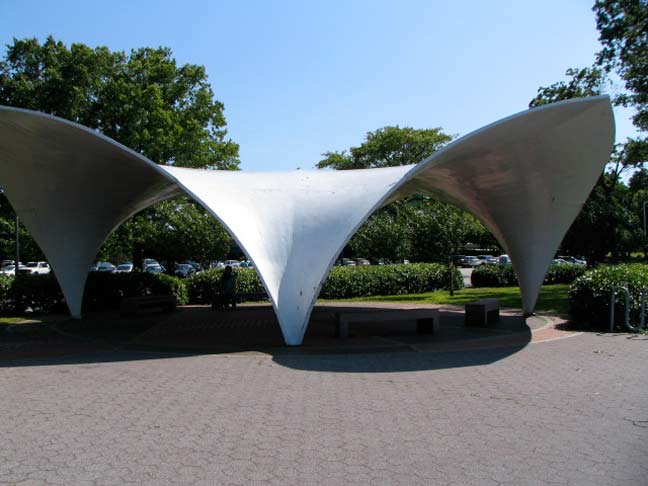 You may have heard of these as the “Candela structures” since the Parks Department named them for Spanish architect Felix Candela, who worked quite a bit in waterside projects, and it’s entirely likely that Schladermundt was inspired greatly by Candela — there is a quite close resemblance. But Candela did not design the shelters. 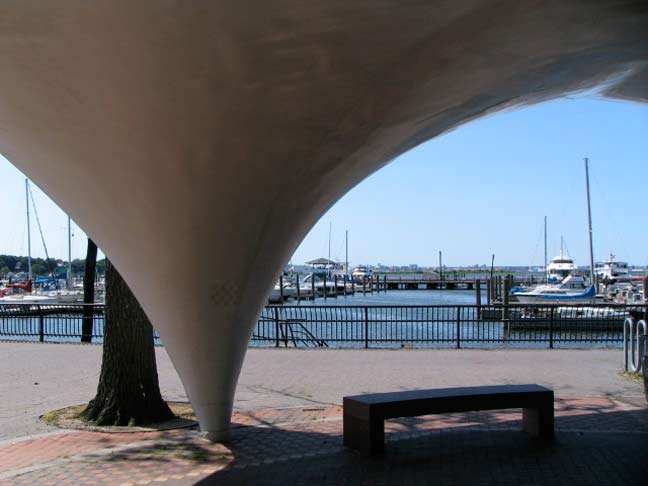 “Schladermundt [pronounced SHLAH-der-munt] Structures” is rather a mouthful;  the “Candela Structures”name has more or less stuck — it’s easier to pronounce and spell. They are true World’s Fair remnants, so see them while you can. There’s no immediate plan to tear them down, but developers are rapacious, as you know.

Paul and Kirsten did a bit of guerrilla editing on a Parks Department sign.

Growing up in northeastern Queens, I never had the chance to visit the World’s Fair Marina. It’s hard to image that such an attractive place exists so close to the ugliness of the Willet’s Point “Iron Triangle”. Those “Candela” Structures are quite unique and attractive. They should be landmarked to prevent any attempt at their removal or demolition, as so much of New York’s history seems not worthy of preservation (especially in Queens), in the eyes of the city of New York.

No great secret. They were part of the Worlds Fair. One for Johnson, one for Evenrude and one for US Coast Guard. I think this was covered in an earlier posting.

I’m guessing Johnson Outboard, as a match for Evinrude.

Sorry, I assumed Johnson Outboard because of the marina location.

Dave C. I also lived near the fair and visited often as a 10 & 11 year old. We could look out the back window of our house and see the fire works display every night.

The link to the Adirondacks cabin is excellent! In a way these structures remind me of the roof of the Kodak Pavilion (yes, I was 9 and 10 during the Fair and grew up about a mile from the back fence on college Point Blvd., which we entered through holes cut in the fence by older, more rowdy neighborhood types).

Huh. I love those structures… such an elegant, forward design.

Hey! I went to school with Kirsten Hively!!