Ten years ago this week it was Occupy Subways as amateur photographers turned out en masse to protest the MTA/NYPD’s proposed subway photography ban. While the measure was indeed defeated and no photo ban went on the books, some police officers still enforce a photography ban, believing it constitutes suspicious activity. While other mass transit such as PATH enforce stricter controls on photographers, the MTA policy is unchanged and photography is still allowed, but flash and tripods are restricted.

From ten years ago. Much of what I wrote here was in a somewhat emotional state of mind, but I stand by my opinions: 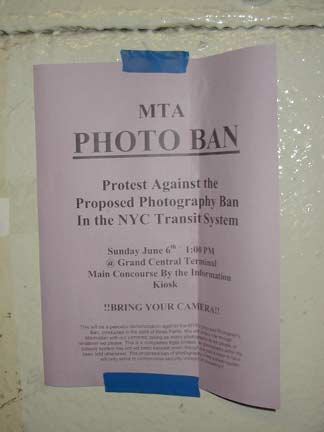 Ostensibly fearing terrorism, the MTA and the Police Department have proposed banning all photography on MTA property (at present, tripods and flash photography are prohibited). Rather than have police officers do their job and investigate suspicious characters, the MTA would like to make things easier and ban all photography, suspicious-looking or not.

Make no mistake:the reasoning behind the ban is not all about terrorism; that’s just a part of it. It’s about the MTA flexing its territorial muscle, and deciding what ‘authorized’ images it wants to present. It wants to sanction those images, and it wants to make money from those images. In the last five years, websites like nycsubway.org, nycrail.com [now defunct] and my own have arisen, presenting hundreds, if not thousands, of pictures of the NYC subway system that the MTA does not earn a speck of income from. It wants to put a stop to that, pure and simple, and the heavy arm of the Police Department will be brought to bear on amateur subway photographers (detractors deem them ‘foamers’) so that the MTA can control what they consider unauthorized photography of its property.

I’m not sure what good it will do, but an impromptu protest against this heavy-handedness was organized as a protest march met at the clock in Grand Central Terminal at 1PM Sunday, June 6th, D-Day. About 75 “photobloggers” and amateur subway chroniclers rode a loop from the #7 east to Lexington, downtown on the #6, west again on the L, north on the A, walking through Penn Station, and returning to GCT via the #2 and then the Shuttle. Whoever was left walked to a closed MTA HQ on Madison Avenue where the photo in the title card was taken. This was not your old-school protest with placards, yelling and screaming but a “flashmob” type thing where everyone gathers at a particular place and leaves almost as quickly. Marchers seemed to be met with bewilderment by regular riders, but a proposed story in the Daily News Monday may enlighten them. 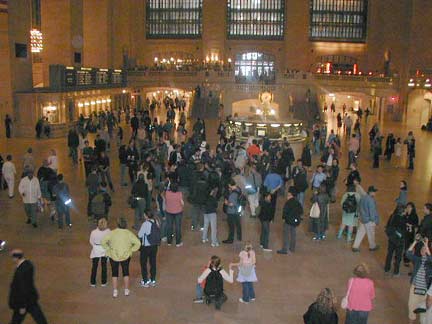 Photobloggers meet at the clock in Grand Central 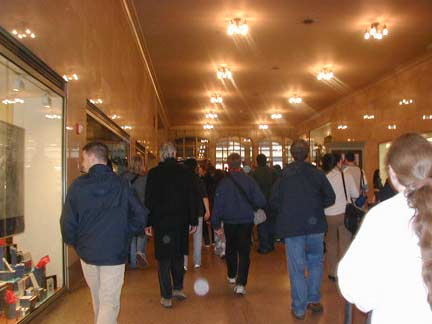 En route to the #7 train 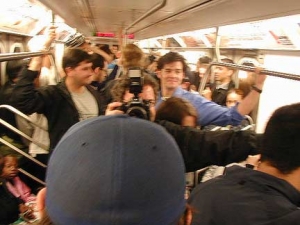 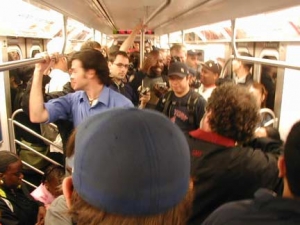 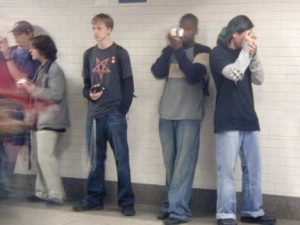 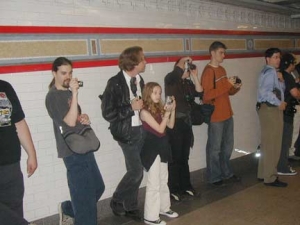 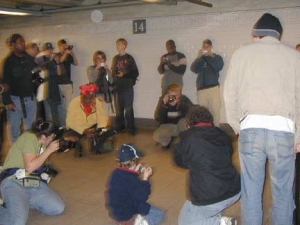 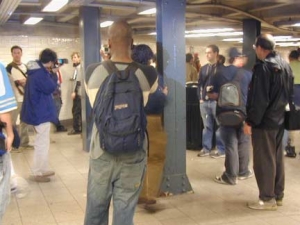 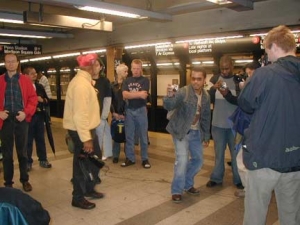 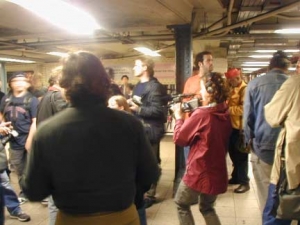 A documentarian was present to capture the protest. 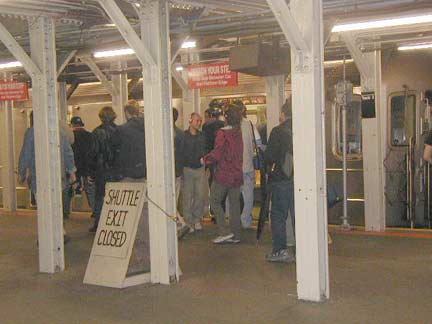 At the Times Square Shuttle platform I appreciate your input on this. I am a big police supporter. In this case, though, they have signed on to protect the MTA’s property rights, and that ain’t right. Write your representative, your congressman, your priest, your rabbi, your analyst, and get this ban stopped. Thank YOU.

And when a terrorist hits the subway scouted out with photos they’ve taken, then youll all cry, piss, and moan about why nothing was in place to prevent this from happening.

Being overly suspicious, aren’t we? Remember, just because you’re paranoid doesn’t mean they aren’t after you!

Amen, Sal. Way back in early 2005, with snow on the ground & frigid temperature, I stopped for a traffic light on the corner of Horace Harding & College Pt. Blvd. (Flushing); this is also where the LIE & the Van Wyck Expressway cross. It’s a long light, so I looked around to kill time. In the midst of this winter misery I saw a gnome like figure with a camera photographing the support columns. I called 911 to report suspicious activity & all the operator wanted to know was if this character was on the sidewalk or not. I kept trying to explain that there was no real sidewalk on this corner & there was really nothing worth photographing & 9/11 was still a recent memory…No comprehension on the other end. “The price of liberty is eternal vigilance”.

That gnome like figure may have been me. VERY few photographers are terrorists.

I didn’t discover FNY until about 2010. Once I became familiar with the site I realized that, yes, it might have been you that I saw on that frigid day. If I had found FNY earlier I would have spared myself the ordeal of a 911 call & bought you coffee instead. By the way, the First Amendment mentions freedom of speech, assembly, & religion but nothing like photography. Is this another “eminence’ of another “penumbra”? God save the Republic.

So in the name of “security” we must take away everyone else’s first amendment rights?

I understood the paranoid overreaction post 9-11 but really, it’s been over 12 years now, and surely we can call time on the great national freakout. There are much bigger threats to life and limb than terrorism and we don’t throw away our liberties for those.

…. Sal, you demonstrated a really piss poor grasp of logic and reasoning.

For one, we’re talking about taking photos – something that anyone can do, of systems and information about them public knowledge, that can be gained from observing and writing down notes. Second, your attempt at painting an image of contradiction and hypocrisy falls short first off in that you are assuming such a stance is hypocritical to begin with, 2nd in that your assumption is merely that – assumption, no facts, and 3rd, your point relies on the confusion of this ban being in place or not, and anything being done to stop terrorist attacks or not. This is an idea, but protesting this does not equate to preventing preventative measures – nor does this being in place necessarily prevent anything.

I’m all for stopping terrorism especially being a native of Israel, where terrorism is much more common, but there are ways to prevent them without being so paranoid, and a lot can be learned by what’s going on Israel that doesn’t feel like an intrusion.

I work in the subway & spent some time as a Train Operator. There are many hidden gems underground & TA does run the nostalgia trains. Which in itself is an invitation to take pictures. BUT for the love of all things holy, PLEASE no flash!!! When you’re operating a train, either driving or closing doors, sight is so important. Being blinded by light, for even a few seconds, makes a dangerous situation. I can’t tell you the number of times I’d enter a station & get nothing but flash from people taking pictures of the train.