In Queens, Northern Boulevard has been called Jackson Avenue (the stretch west of Queens Plaza still is) Bridge Street, and Broadway; a Flushing enclave and LIRR station still bear the name Broadway after the old road. I’m unsure when the whole kaboodle was renamed Northern Boulevard; perhaps it was in the great 1920s “boulevard”-naming craze the Queens Topological Bureau underwent, when the Philadelphia-style numbering system was instituted and most major roads like Vernon Avenue, New York Avenue, and Rockaway Plank Road were given “boulevard” monikers.

To walk Northern Boulevard, or Routes 25A/25 from shore to shore would require a few days, and at the sluggish pace your webmaster generally employs, more than a week. 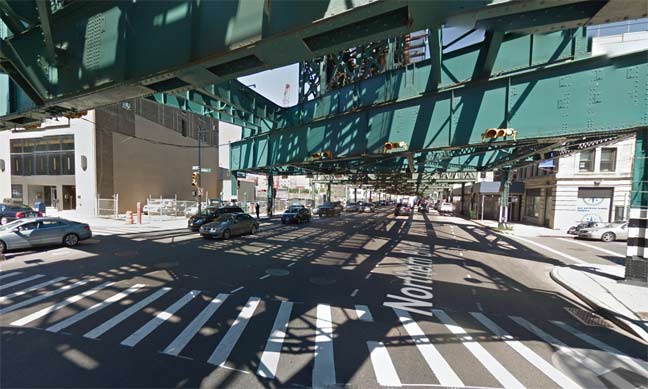 There’s no disputing that in the county of Queens, Route 25A is called Northern Boulevard. It begins here at Queens Plaza, the same spot where Queens Boulevard, running east and southeast, also begins. For  a few blocks, it sluggishly staggers along under the elevated Astoria Line (N, Q trains), and the IND Queens Boulevard line (E, F, R) runs under it. Northern Boulevard is freed from the oppresiveshadows at 31st Street and 39th Avenue, and runs quickly and furiously, hurtling toward the city line in Little Neck. 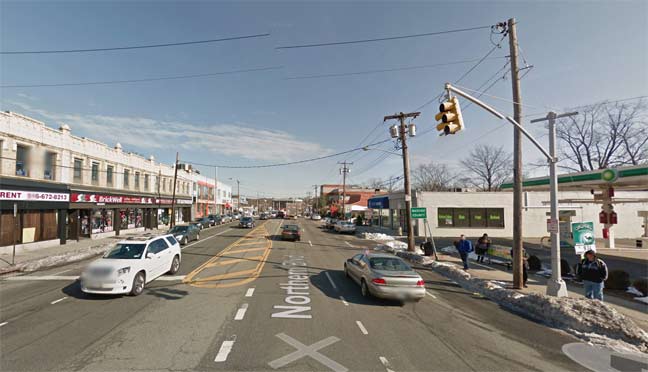 Nowadays, Route 25A maintains the name Northern Boulevard once crossing the city line — these days, at least. This was not always the case. 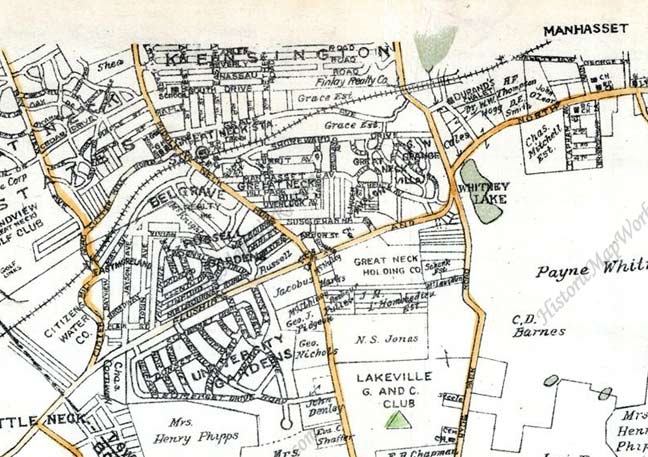 On this 1927 atlas plate, Northern Boulevard is shown as the line running northeast through the center. It’s labeled the Flushing and North Hempstead Turnpike, an accurate name since Little Neck is in the old Queens town of Flushing and once over the city line, is in the Nassau County town of North Hempstead. In 1899, three eastern towns in Queens decided to form their own county in a dispute over where the county court house would be located, Long Island City or Mineola, and the three towns, Hempstead, North Hempstead and Oyster Bay, became Nassau County.

The North Hempstead Turnpike name would be coterminous with Route 25A all the way to the Nassau/Suffolk County line. But there has been a trend over the decades to call it an eastern extension of Northern Boulevard instead of the older name — but not by everyone. 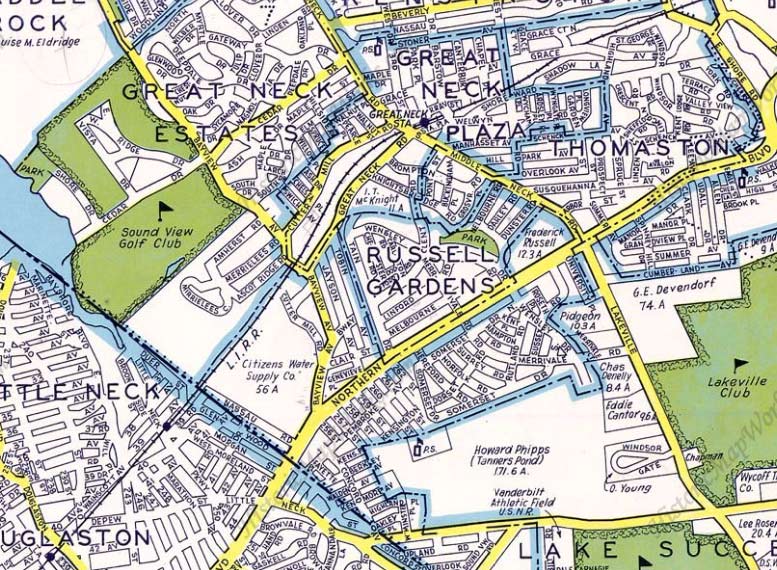 This excellent 1939 map by Dolph Maps (which is still around, but only in the South) indicates  that by then, North Hempstead Turnpike had apparently become Northern Boulevard even past the city line in Nassau County. It would seem that the issue had been settled, and Northern Boulevard had won. 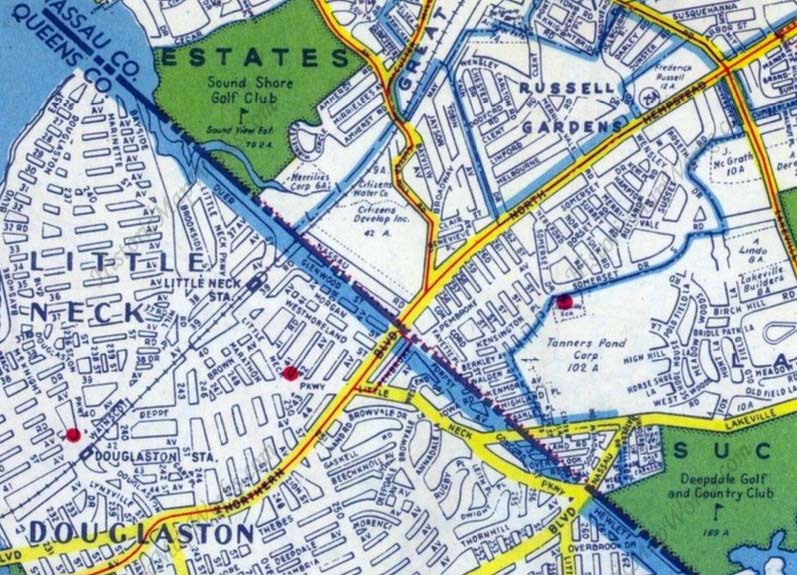 Not so fast. This Hagstrom plate from 1949 shows that Route 25A becomes North Hempstead Turnpike at the Queens/Nassau line, while keeping the Northern Boulevard name in Queens exclusively.

These days, through most of Nassau County, the overwhelmingly favored name for 25A is Northern Boulevard. When the Roslyn Viaduct was built in 1949, the older section of 25A that curved through downtown was then renamed Old Northern Boulevard (it had been Willow Avenue). Even after crossing into the town of Oyster Bay the Northern Boulevard name still sticks. But … 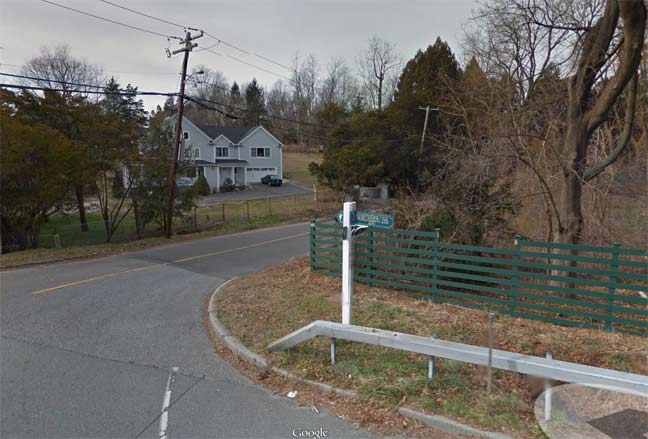 Google Street View isn’t adept at catching street signs, so bear with me from here on.

At Remsens Lane, the road bears signs identifying it as “Northern Boulevard/25A.” Unlike New York City, where street signs are pretty uniform, Nassau and Suffolk feature street signs of all shapes, colors and fonts. 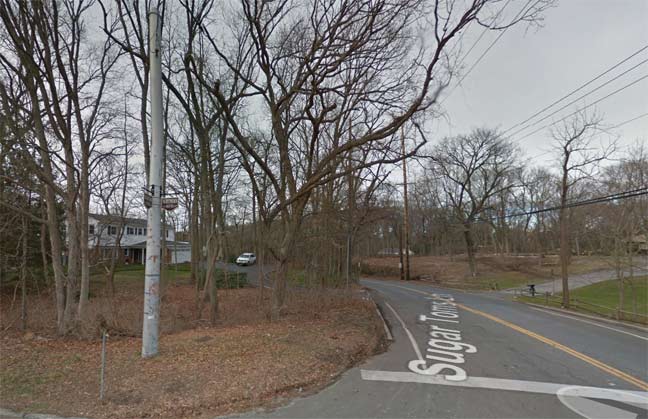 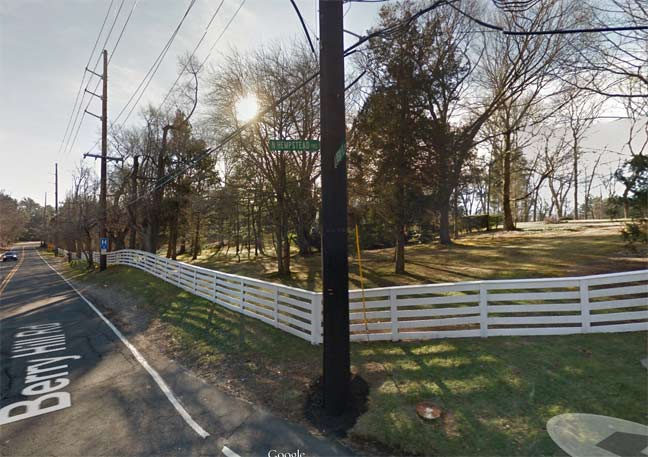 Even now, however, these is a dispute over what the name of 25A. is. At the junction with Berryhill Road, two street signs stick with the old tradition and call it North Hempstead Turnpike. You would think that would settle the matter, no? East of here, you’d think Northern Boulevard ceases to exist.

That’s not the case, however. Northern Boulevard is shown on street signs — which in Nassau are small and inconspicuous — as far east as Cove Road at Memorial Cemetery. East of that, though, the street signs simply say “Route 25A”, washing hands of the dispute. 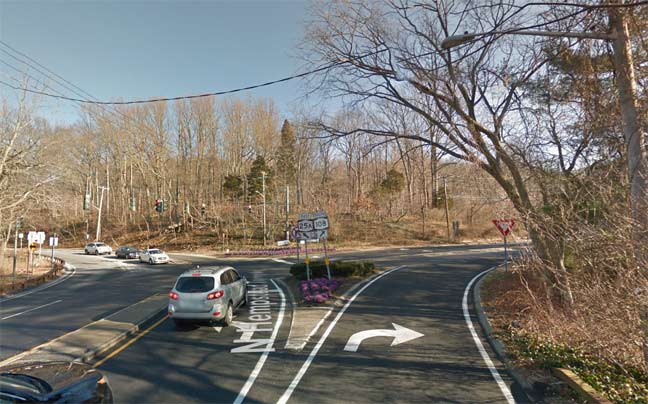 Finally, at the Nassau-Suffolk line at Cold Spring, 25A continues northeast as Harbor Road, and Route 108 east as Lawrence Hill Road.

So, the designation between “North Hempstead Turnpike” and “Northern Boulevard” is left rather ambiguous for the last mile of the road’s lengthy run. I’d bet the local denizens simply say they’re on 25A.

OUR LADY OF VILNIUS, SoHo

I worked the summer of ’73 and ’74 in the kitchen at Booth Memorial Hospital as my summer job, while attending College in faraway Boston (well, Cambridge, MA)!

I can remember as a child in the 1960s and 1970s, taking the Q44 bus from Whitestone to Jamaica to go to the Queensborough (now Queens) Public Library’s main library in downtown Jamaica. (I was and still am a map afficionado, and used to love going to what was called the “Long Island Division” at the main library, as they had a huge collection of maps and atlases specializing on Long Island). I remember vivididly passing Booth Memorial Hospital in the Queensborough Hill section of Flushing, and wondering why the street that bears the current name of Booth Memorial Avenue was named North Hempstead Turnpike, as I knew North Hempstead Turnpike was the name of portions of Route 25A in Nassau County, that had not accepted the Northern Blvd. moniker. These at the time seemed to be the portions of Route 25A east of where the Town of Oyster Bay begins, past the intersection with Glen Cove Road in Greenvale.

A 1946 Hagstrom Atlas of Queens and Nassau Counties, Long Island 1946, shows North Hempstead Turnpike starting at Rodman Street (currently named College Point Blvd.) in Flushing and running eastbound crossing Horace Harding Boulevard at 186th Street, and terminating at Peck Avenue at approximately 196th St. (Although today Booth Memorial Avenue runs the same course, current day maps show its termination at the westbound Horace Harding Expwy. service road just shy of 186th Street). From 1956 to 1958 Horace Harding Boulevard was replaced by the construction of the Long Island Expressway from Queens Boulevard to Power House Road in Roslyn Heights, with the service roads in Queens from Queens Boulevard to the Queens/Nassau border bearing the name of Horace Harding Expressway. West of Queens Blvd., the Long Island Expwy is also known as the Queens Midtown Expwy, (although it’s signed as the LIE), and what exist as service roads are not consistently named as such. I found a small section of the eastbound service road in Maspeth with the Queens Midtown Expwy moniker, although the largest portions of both the eastbound and westbound service road go by the name of Borden Avenue, as apparently Borden Avenue runs adjacent to the Long Island Expwy for most of its run in western Queens, and even runs over the Queens side of the Queens Midtown Tunnel from Center Blvd to Vernon Boulevard in the Hunters Point section of Long Island City.

Please note that in my above comment, on the fourth line there is a typographical error; The word “vivididly” should correctly be “vividly”.

I also rode the Q44 from Whitestone to Flushing and Jamaica in the 50’s and 60’s. My grandparents lived a few blocks from 14 th Ave. and Parsons Blvd (last stop before crossing into the Bronx, which cost an extra 10 cents). My mother had a part time beauty shop job at that corner, and I picked up a few copies of the Daily News and Mirror for customers on my LI Star Journal route in Malba (1962 & 63).

To Alan, I also rode the Q44 to Flushing and Jamaica in the late 50’s and early 60’s. My grandparents lived a few blocks from 14 th. Ave. and Parsons Blvd. My mother also worked part time at a beauty shop there, and I picked up The Daily News and Mirror for a few customers on my LI Star Journal Route in Malba. I remember taking that bus to the Bronx. Crossing the bridge was an extra 10 cents for a grand total of a quarter.

Unlike Fred and Alan, I and my family used the “other” line-the Q-14- to get to the Main St. subway in Flushing, starting in the 1970’s. We got on at the classic, should’ve-been-a-landmark candy store on the corner of 14th Ave. and 150 Street in the exact heart of the “Village” in Whitestone. But, time does march on, and that candy store was knocked down earlier this year and replaced with Doctors’ offices associated with NY Hospital Queens-the former Booth Memorial Hosp. which gave its name to the street mentioned in these posts.-Gary Dempsey

Am fasincated by the similarities in style between the Dolph and Hagstrom maps. I would have just assumed they were both Hagstrom. Kevin – I think you once made mention of how during the height of the “map wars”, publishers would sometimes purposely plant false spellings or information in their maps, in order to try to catch their rivals in a blatant act of plagiarism. Seems like there would have been a bit of jousting by these two companies over the years….

I am interested in how the house at 45-24 244th street Queens, New York appeared in 1901. Any imagery you could supply, would be welcomed. I sketch.

As someone who moved into a Queensboro Hill house with a North Hempstead Turnpike address in the late 50s — I was not quite six — I was less than thrilled by the name change to Booth Memorial Avenue, which, being equally long and clumsy, was no improvement at all. But little did I imagine that it would someday also be ridiculous, since it now refers to an institution that is no longer here.

In earlier times, the street was called Ireland Mill Road, and I’d love to see it renamed again, this time to a minimalistic “Mill Road.”

When was Broadway renamed Northern?
I live in Broadway-Flushing near the Long Island RR Broadway station.

Booth Memorial Hospital was a wonderful institution. I think the name of the street should be left alone. Just because the name of the Hospital has changed doesn’t change the past and what that hospital meant to the community.