The Art Deco Broadway Fashion Building (Sugarman & Berger, 1931), Broadway and West 84th Street, was forward-looking for its time and featured a lot of exterior glass, which would get further emphasis in the International Style in the late 1950s, which has pretty much ruled for office buildings ever since. For years the ground floor was dominated by a faux brick treatment that was totally incongruous with the remainder of the building. The current ground floor tenant, Five Napkin Burger, has restored the glassy exterior, temporarily at least. (I once ate at a Five Napkin in Astoria that has since closed, across the street from the Kaufman-Astoria Studios. It was a nice burger but for my money the king of Queens burgers is Ottomanelli’s, Woodside Avenue and 61st Street, an offshoot of the Ottomanelli butcher a few doors down.) 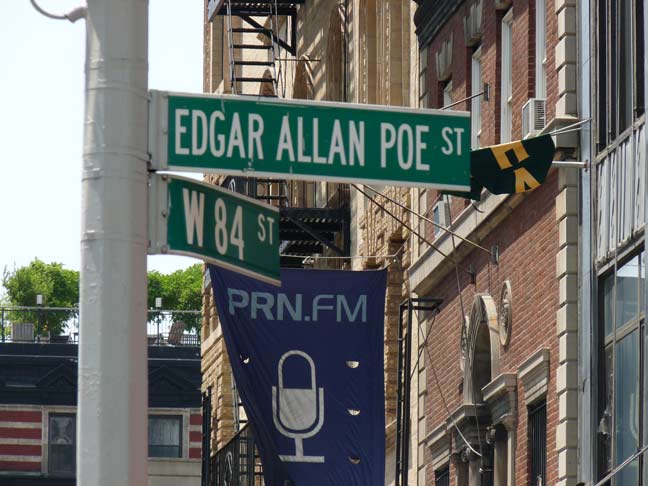 The brilliant, troubled fiction writer and essayist Edgar Allan Poe (1809-1849) was born in Boston and died in Baltimore, and lived in many US Northeast cities (Providence, Philadelphia, Richmond, New York) in between; he lived at a building on West 3rd Street torn down by NYU in the early 2000s, as well as a country house in the Upper West Side at approximately 84th Street before the actual street was built. The cottage in the Bronx where he lived with his mother and cousin-bride has been preserved as a museum.

This is NYC’s principal street named for Poe, though the Bronx contains a dead-end alley, Poe Place, in Fordham.

Poe’s  favorite neighborhood spot was at Mount Tom, an outcropping of rock at Riverside Drive and West 83rd Street. Poe lived in a farmhouse at what is now at about 215 West 84th; there he completed The Raven, and it’s believed he wrote the poem To Helene on Mount Tom. From Riverside Drive you can recognize the outcropping by the portion of the Riverside Park fence that is painted white. There are pebbled paths that lead you to the rock.

PRN.fm is the Progressive Network.

The waters of the river have a saffron and sickly hue; and they flow not onwards to the sea, but palpitate forever and forever beneath the red eye of the sun with a tumultuous and convulsive motion. For many miles on either side of the river’s oozy bed is a pale desert of gigantic water-lilies. They sigh one unto the other in that solitude, and stretch towards the heaven their long and ghastly necks, and nod to and fro their everlasting heads. And there is an indistinct murmur which cometh out from among them like the rushing of subterrene water. And they sigh one unto the other. —Poe: Silence: A Fable