The “Fighting 69th” regiment of the US Army, a part of the NY Army National Guard, was founded in 1849 and has had a rich history in the US Civil War and Word War I and up to today; the unit has fought in the Iraq War. Between 1917 and 1992 it was also designated as the 165th Infantry Regiment, and its headquarters are still located at the 69th Regiment Armory at #68 Lexington Avenue fronting the entire avenue between East 25th and 26th Streets. A substantial memorial to the “Fighting 69th” is found in Calvary Cemetery in Queens.

In its early days the regiment consisted nearly completely of Irish immigrants. Its motto, “Gentle when stroked – fierce when provoked” refers to the representations of Irish wolfhounds found on the regiment’s crest and dress cap badges in the 1860s. In some ceremonies, the regiment’s officers and senior non-commissioned officers carry shillelaghs as a badge of rank. 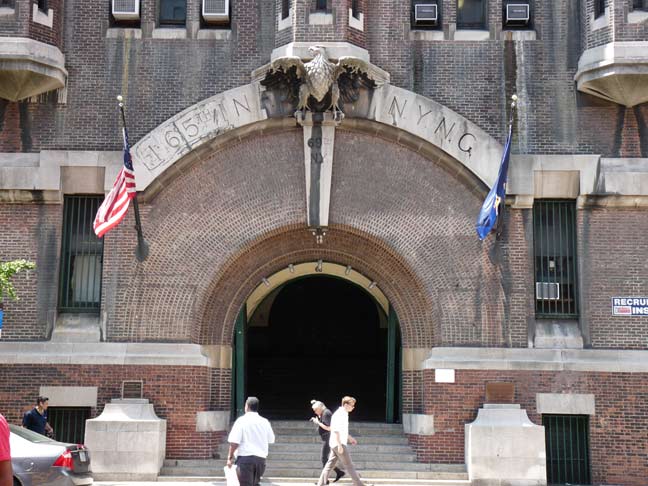 The armory, built from 1904-1906 by the architectural firm of Hunt and Hunt, does not resemble the uptown, Brooklyn, Bronx and Staten Island armories constructed in the 1800s. They were built on the model of medieval-style fortresses, while Hunt and Hunt went for a then-contemporary Beaux-Arts look, even adding a French Second Empire-style mansard roof, originally popular in the 1870s. 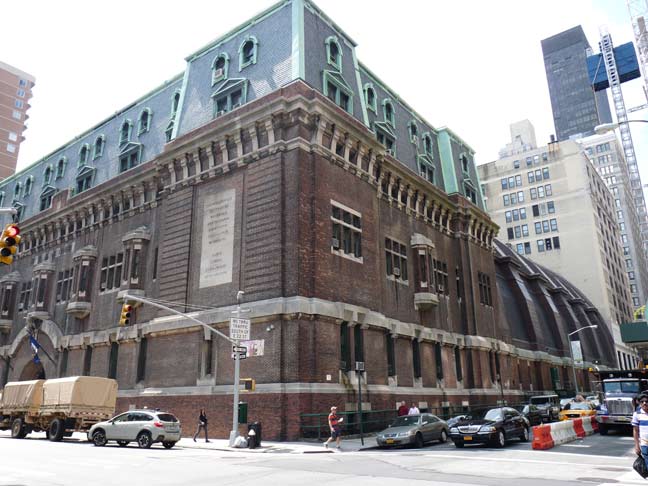 Between 1917 and 1992 the “Fighting 69th”was also designated as the 165th Infantry Regiment, which has been chiseled above the front entrance. Though the Guard is still HQ’ed here, the Armory has been put to an amazing number of uses over the years:

–As early as 1913 art shows were presented here, including the International Exhibition of Modern Art Armory Show, where Marcel Duchamp’s “Nude Descending a Staircase” was first shown

–NBA NY Knickerbocker games from 1946-1960, after which the Knicks moved to the uptown Madison Square Garden at 8th avenue and West 50th Street 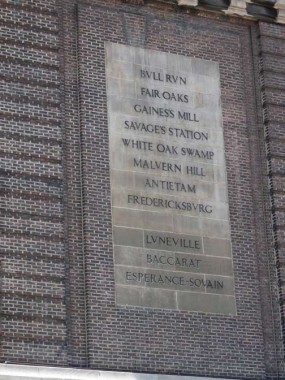 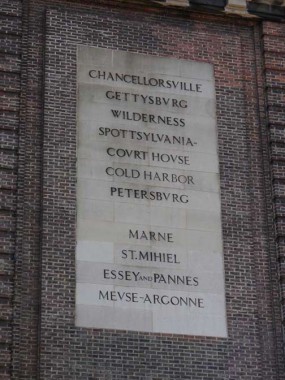 Names of prominent battles of the Civil War and WWI are inscribed on the 25th and 26th Street ends, using the “v of importance”

Much more info is found at the armory’s website, which is charmingly low-tech.

That unit was also a movie starring James Cagney I think

I have attended an antiquarian book show that was held here within the past year. Pretty interesting inside as well, if they have the book show again it is worth a look. No, I didn’t buy anything at the book show!

My father was an officer with the 69th in the 50’s and 60’s. That allowed me access to the interior for events like the Review and Regimental Toast after their marching in the St.Patrick’s Day Parade. Indeed, if the opportunity becomes available to get inside, it is worth the time!

As a graduate of Hunter College, I so fondly remember this building.