I was meandering around Long Island City, gathering details on what would be my Brownstoner Queens post regarding 29th Street, when I thought I would check in on the condition of Old Ridge Road, since I’m drawn to these old routes that predate the present street grid. I’ve since started wondering, though, if this is indeed one of those routes. 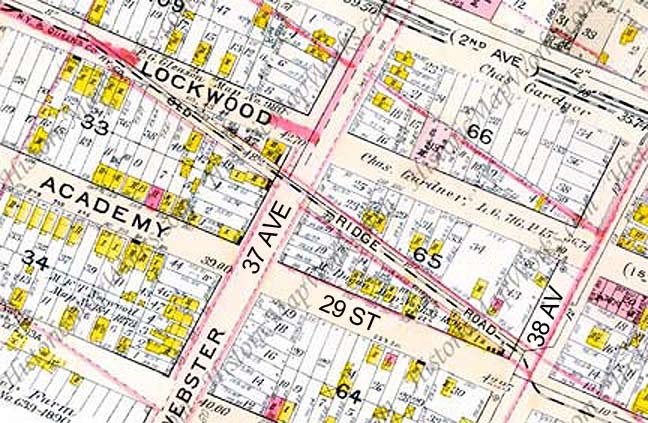 The oldest reference to Old Ridge Road I encounter in my research is from very early in the 20th Century as a street running athwart the overall grid between Academy (29th) and Lockwood (30th) Streets, and Webster Avenue (37th Avenue) and Freeman Avenue (38th). It just doesn’t show up on earlier maps of Astoria, and I’m wondering if it was an original colonial trail at all, but was built as a right-of-way for the NY & Queens County Railway, which ran a surface trolley line here. I made a parallel observance in the case of Jackson Mill Road in Jackson Heights, whose remaining sections are still extant because they were part of the right-of-way of the trolley that ran to North Beach and later, LaGuardia Airport. 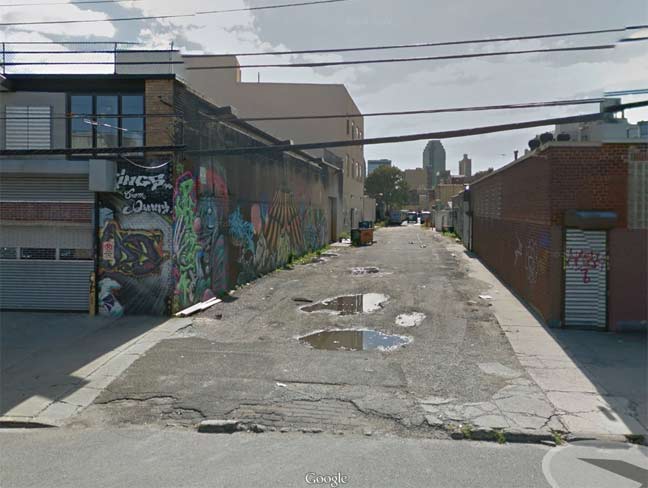 Though I shot my own photos of Old Ridge Road during my walk, I found this Google Street View image irresistible, since they caught it at just the right time when the old lane was devoid of parked trucks, as it usually is. In addition, look closely and you can still see some brick paving in the foreground. 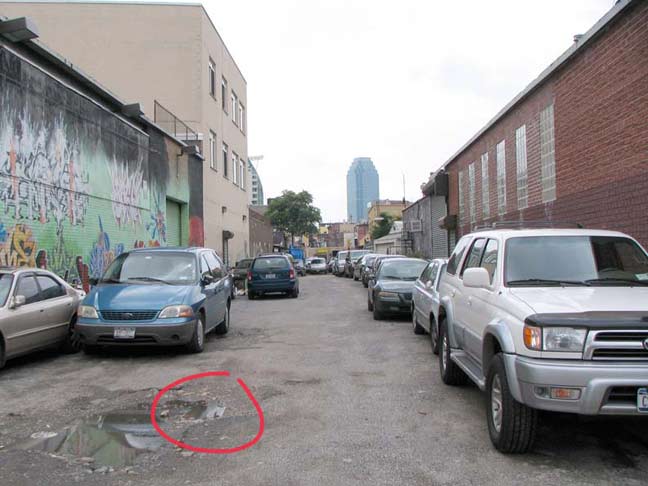 On a previous walk a couple of years ago I detected what I was sure was an old trolley track poking through the broken pavement. I circled it in red, but why I didn’t just walk in there and get an enhanced shot, I just don’t know. In any case, I could not find the track on my most recent walk. 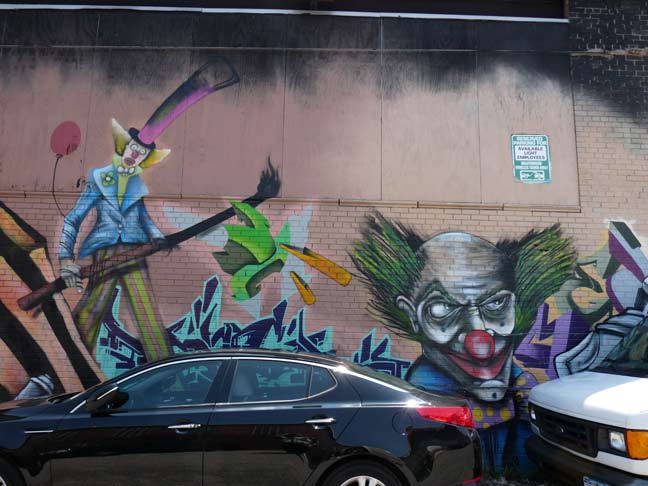 A new mural showing evil clowns on the 37th Avenue end of the road. 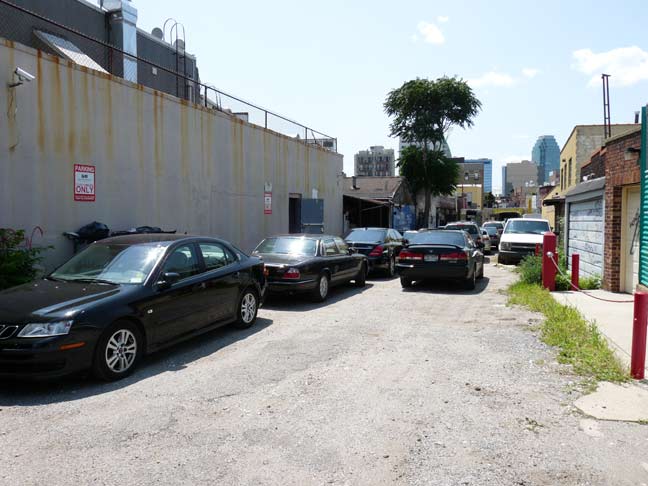 During the week Old Ridge Road is too choked with parked cars and trucks for me to make my way all the way through. There are constant Guardians about, ever ready with the catchphrase “whutcha doin’ with the camra?” 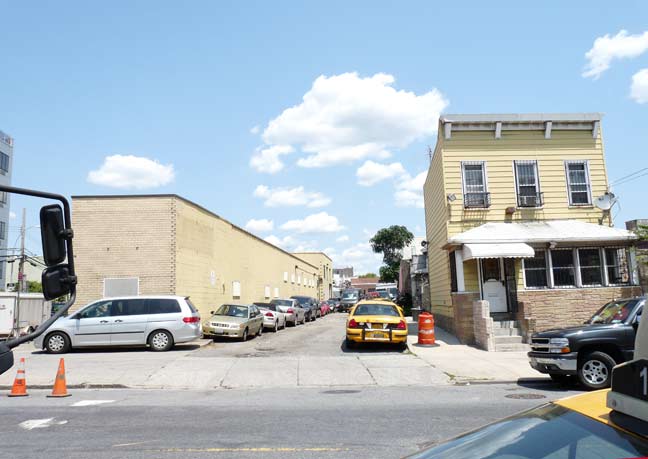 Old Ridge Road’s orientation against the grid is most evident at 38th Avenue, where it just misses an intersection with 29th Street. The yellow aluminum-sided house on the right appears to be of considerable age. 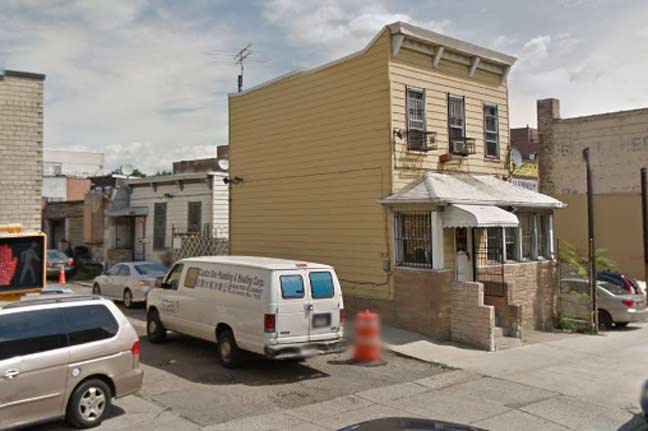 Referring once again to Google Street View, you can see a neighboring old house facing Old Ridge Road. If this is a residence, it’s the only one on Old Ridge Road.

For me the jury is out whether ORR is a construction accommodating the NY & Queens Railway, or of it’s indeed a much older road. Perhaps a visit to the Queens Library historic photo collection on Merrick Boulevard and a look through Eugene Armbruster‘s comprehensive photo collection could settle things; I wish Armbruster’s work was uploaded online.  I wish many things….

In the middle and late fifties and early sixties the yellow house on the right was a bar called the Coconut Inn. My grandfather lived on 29 st. I remember seeing the bar when I was a boy.

My Mother grew up on 29th.street in the 40’s & 50’s. She remembers the Coconut Inn being the long building on the left, not yellow house. Is it possible you might be mistaken?

The building on the left is where the Coconut Inn was, not the yellow house. The Coconut was razed some time after I moved away from 29th Street in the mid 60’s, my father owned 37-23 29th St. from about 1958 until his death in 2010. The building there was constructed sometime during the time I was away. It belonged to Goldreyer Inc. when I moved back to 29th St in ’74, and may still be owned by his family, I haven’t been back there much since my father died.

I happened to find your photo revealing what appeared to be an old trolley track. I have one of my great grandfathers business cards showing his residence address as 218 Old Ridge Road with the phrase ” Dutch Kill’s car passes the door” so now you know the trolley name

See The Brooklyn Daily Eagle, dated July 29, 1902, page 2, fifth column at the bottom, “Child Fatally Injured”. It reports that a child living at 220 Old Ridge Road was run over by a Dutch Kills trolley car “almost opposite his home”.
http://bklyn.newspapers.com/

hey i run a astoria group.. old ridge road was my favorite.. walk down it.. to my lic.. if u have a picture of that trolley on that road.. i would like to see it..please message me on facebook about this if u ever see this message https://www.facebook.com/gabriel2puglisi

if u can find me the whole clip of what is said about the kids death..please comment below

There are trolley tracks and cobblestones under the blacktop most of the length of Old Ridge Road. I found a Queensboro bridge trolley token buried in the sand under the cobblestones, behind my fathers house at 37-23 29th St., while digging to replace the water main line to our home in the 70’s.

i have the artical of the boy dying but i do not see a way to post it here.. so if anyone wants to view it.. please come to my astoria group https://www.facebook.com/groups/AstoriaLostForgottenWorld/ its in there

Is ORR considered private property? Are vehicles not allowed to park there?