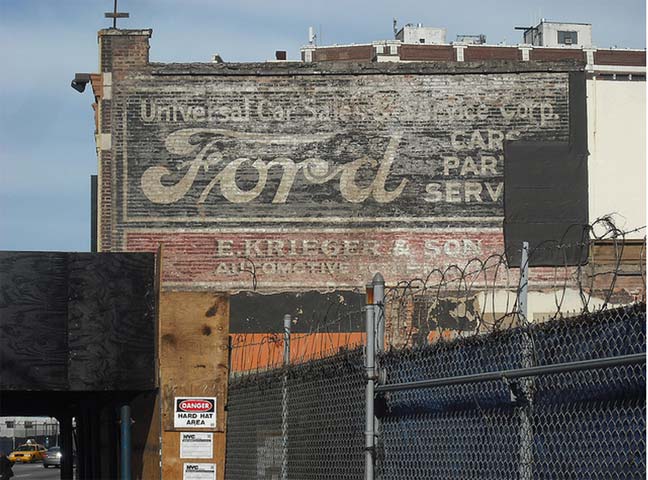 Northern Boulevard has long been a road given over to the automobile. (Of course, Captain Obvious.) What I mean is that while the mother road of the north shore of Long Island is home to many used car dealerships, it has also been Queens’ main drag for automobile manufacturers and suppliers. I worked briefly at Standard Motor Parts in November 1999, which has been supplying the auto industry with ignitions, spark plugs, and the like since the 1910s. The boulevard also has several factories and showrooms for long-lost auto makes, such as Packard and today’s ForgottenSlice… 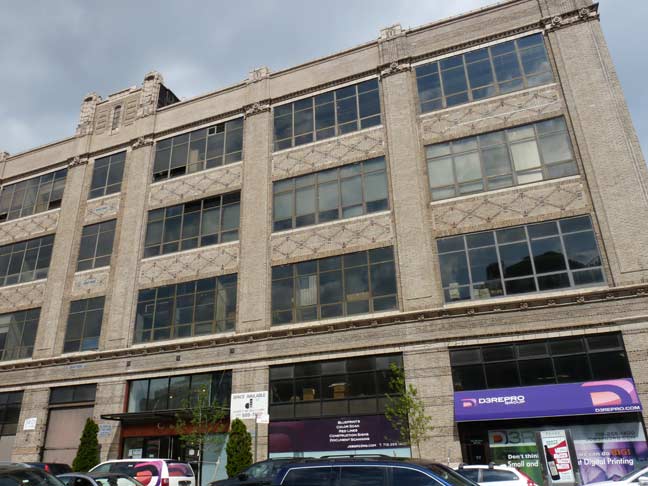 … Pierce-Arrow. The company, based in Buffalo from 1903 to 1938, evolved from a luxury birdcage manufacturer established in 1865, Heinz, Pierce and Munschauer. Henry N. Pierce bought out his two partners and began building and retailing bicycles and motorcycles in 1896, with the leap to automobiles in 1901. The company’s first success, a two-cylinder auto, named the Arrow, appeared in 1903. The company’s first commercial success, the four-cylinder Great Arrow, arrived in 1904. Though George Pierce sold all his company rights in 1907 and passed away in 1910, the company was known as Pierce-Arrow from 1908 to 1938.

Pierce-Arrow Society, dedicated to the preservation of Pierce-Arrow Motor Cars and trucks

Pierce-Arrow became known for its luxury autos, as film stars and heads of state made sure to have at least one Pierce in their collection (William H. Taft made the Arrow the first official car associated with the White House). Later, however, since Pierce-Arrow didn’t have a moderate-priced line the company suffered during the Depression and closed its Buffalo factory, which has since been declared a landmark, in 1938. 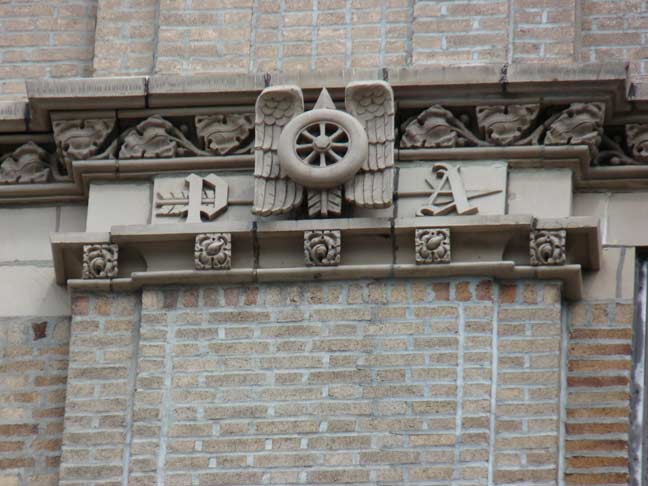 Pierce-Arrow’s 1913 Long Island City factory still stands on 38th Avenue between 34th Street and Northern Boulevard across from, appropriately, a gas station. Longtime readers of FNY know of my admiration for stolid brick architecture, and the factory imparts a sense of permanence, even though its parent company existed for only thirty years. The building once had a lengthy, arrow-shaped neon sign, emblazoned with the word “Pierce.”

After Pierce-Arrow folded, the building was home to a TV and radio manufacturer and has long served as a home for warehouses, light manufacturing and artist spaces.

To me, the company ID treatments on the exterior pilasters, or half columns, are the most fascinating. These are rendered in terra cotta with the winged-wheel motif that was also popular on humble garages and auto-repair shops of the time. The letters P and A, in Old english blackletter, are connected by a stylized arrow. The building has a couple of variations on this theme. 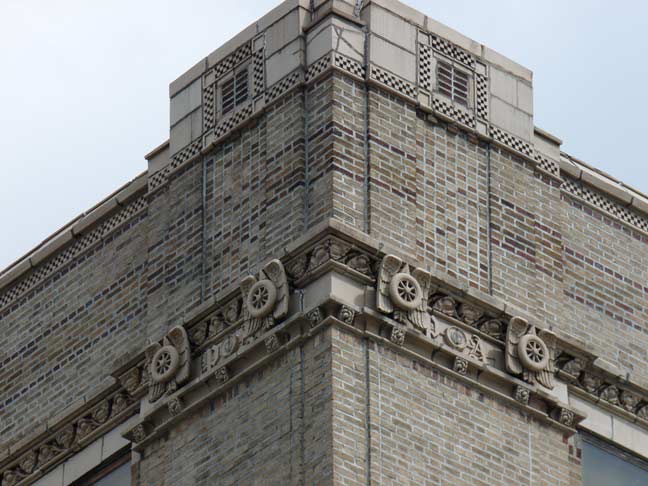 On the corner, note the checkerboard style on the cornice, rendered in different color bricks. The ‘checker’ motif would be adopted by NYC cab companies, but I’m unsure whether the Pierce-Arrow building inspired it. 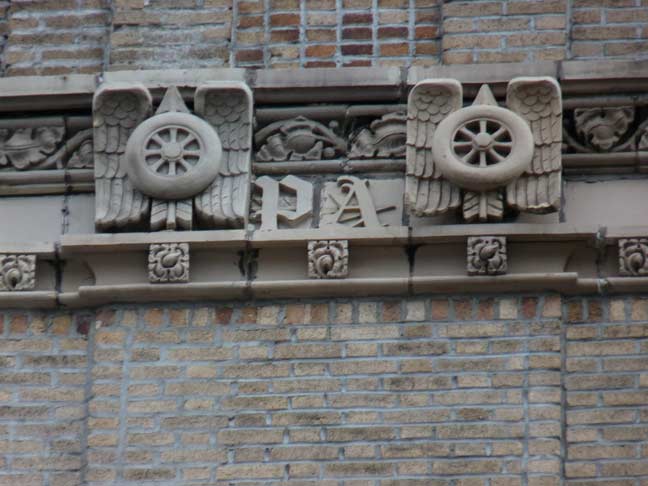 On this variation there are two wheels with the P and A together on a shorter arrow in the center. 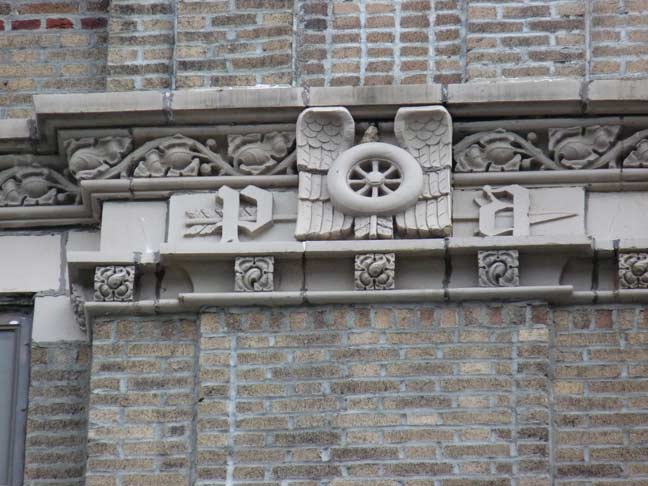 This is the usual configuration, but the A is lowercase instead of capital. Could this have been an error?

My friend Mitch Waxman visited the Pierce-Arrow factory earlier this summer, and filed this report for Brownstoner Queens.

The Pierce Arrow Building had another famous (or infamous) tennant, The Brewster Aeronautical Corporation, from July 29, 1938 when it was purchased by James Work, who had contracts with the USN to build a dive bomber (XSBA-1) and a the first monoplane fighter for them, the BUFFALO (F2A-1 etc.). He believed that aircraft could be built in an urban plant, without the need for airport-adjacent property, and this proved to be optimistic, to say the least. He also utilized the nearby Ford assembly building of ten stories, literally across Northern Blvd. for component assembly. Both required planes be built on different floors, then assembled on the ground floor of the P.A. plant, then disassembled and trucked to Newark Airport (where Brewster had leased a hangar, formerly of the Barkely-Grow Aircraft Co.) to be test flown — after reassembly! Eventually this over-complex process lost him the business when FDR dictated that the Navy take it over after Pearl Harbor in 1942. Brewster was allowed to dissolve before war’s end, though it produced 750 BERMUDA/BUCCANEER (SB-2A) dive bombers, and licence built CORSAIR (F3A) fighters in about the same proportion, in a new plant in Johnsville, PA. Charges of war profiteering were made against a subsidiary sales company, but it was the erratic and inefficient production output that soured the USN in the end. Also, consistant (not entirely untrue, but not entirely unbiased either) reports of poor workmanship and performance hurt the company badly. The BUFFALO and BERMUDA were not so out of pace with their competition, if well flown, but were scapegoated for many defeats in air combat. Note: why Brewster didn’t use the railroad acces it had behind the Ford plant is a mystery to me! Most info from historian Jim Maas.