During the spring I was making my way down Newtown Avenue in Astoria (which isn’t the same as Newtown Road, but actually is, as the two roads actually made up one colonial-era thoroughfare that survived past the imposition of the street grid in the 19th Century) when I spotted a familiar sight at 23rd Street, in front of the Mount Carmel Institute. 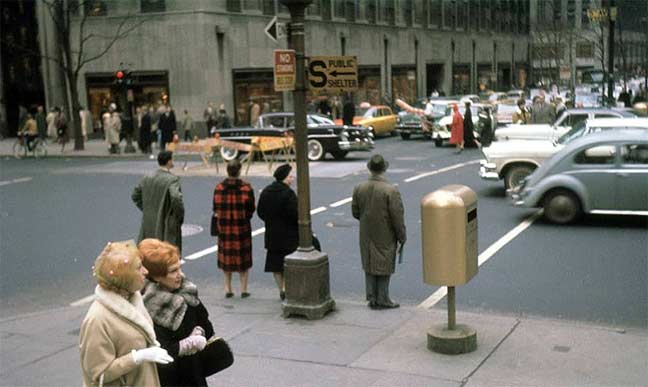 There’s a lot going on, to my keen eye at least, in the 1961 photo of 5th Avenue and 50th Street. 5th Avenue is two-way and would remain so until 1966. 1950s-era cars, including a VW Bug, run up and down. A couple of ladies in their 50s parade past in fur-lined coats and white gloves. (Today, people in their 50s look generally younger than this; it must have been from all those Monkees records they heard as children.)

In the foreground sits the shaft of one of 5th Avenue’s distinctive stoplights. They were limited to red and green and had a small representation of Mercury, the god of speed, at their apices. Oddly, the opposite corner shows a regulation Olive light with a Ruleta light, likely a hasty replacement. In 1965 the city removed most of these distinctive stoplights when a new generation of double Deskeys were installed. The previous generation of One Way signs, cut to look like an arrow, hold on but would be replaced in a couple of years.

Also note here what I take for a mailbox but may have been a trash receptacle. I’m unsure; fill me in in the Comments section.

On the shaft of the stoplight is a yellow and black sign indicating a public shelter is nearby. These signs were once quite frequently found along NYC streets… 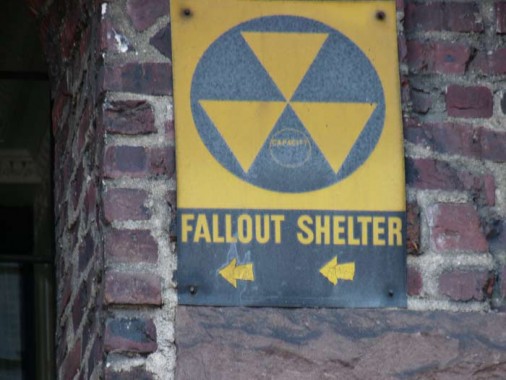 … they were, apparently, variants of the Fallout Shelter signs installed during the Cold War, indicating nearby underground escape vaults safe from radiation fallout produced by A-Bomb blasts.

During December 2013, I found an old one still attached to a pole at Brevoort Street and Cuthbert Road in Kew Gardens… 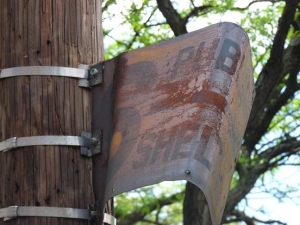 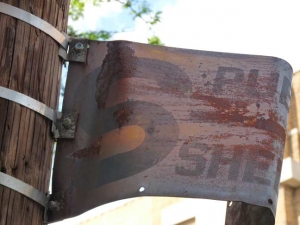 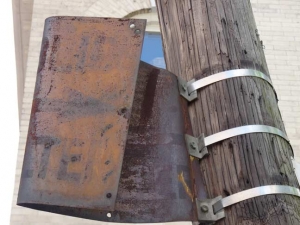 Here’s another aged, battered, bent but unbowed larger Shelter sign in front of Mt. Carmel Institute in LIC, one of two surviving of this species that I know about.

That gold-colored box is definitely for trash, not mail.

Trash Receptacle. I remember them being around into the 70s.

In the years before & after the Cuban missile crisis my family lived in Parkchester in the Bronx. Not only were the shelter signs posted outside, they were also posted in all the interior hallways. So here we were less than 10 miles from midtown Manhattan (ground zero for a Soviet missile strike) & civil defense thought that if we just left our apartment & moved into the hallways we’d survive a nuclear attack & then we’d calmly discover the storeage area for the rations that were stored (but no one told us where).That’s why “Dr. Strangelove” was such a catharsis (TCM is showing it this week). Can’t wait for ISIS (or whoever) to show it’s hand.

The gold object is a nyc trash can

Dayum! Love that 50’s pic! The streets looked so clean. People dressed so nice; and I can’t spot one obese person!

In the late 70’s I worked as a porter in an apartment building at 97-50 67th Ave on the boarder between Rego Park and Forest Hills. I mopped on buffed floors and did repairs. I was also charged with cleaning out the storage rooms which had piled up junk.

The building was a fallout shelter and in one room there were the supplies – several cases of tinned water and a @30 gallon sized fiber barrel filled with individually wrapped hard candies. In retrospect, I wonder if they were sugar for cheap energy plus perhaps iodine to protect the thyroid.