The stolid brick Neptune Meter Works Building on Jackson Avenue and Crane Street stood from 1910 until today, October 9, 2014; it had been razed to make way for a multimillion dollar condominium project, joining many such in the neighborhood and along the Queens waterfront. Neptune, currently based in Tallassee, Alabama, occupied the building until 1972. 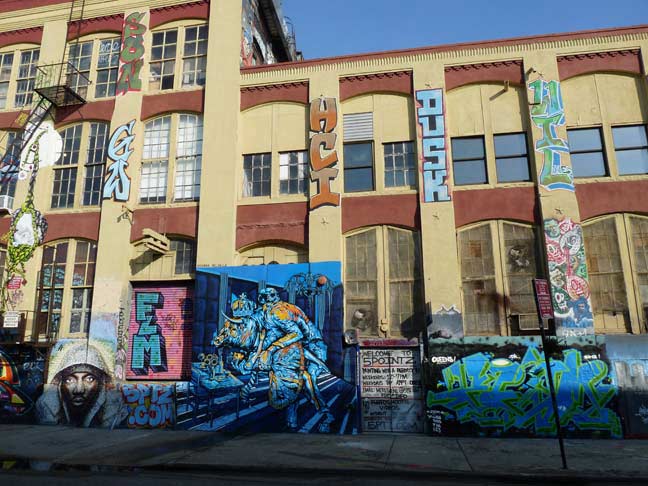 5 Pointz, originally the Phun Phactory, is an exhibit space on Jackson Avenue and Crane Street in which graffiti artists have decorated the exterior of a 200,000 square foot factory building. Artists pay below market rate rent for studio space in the interior. 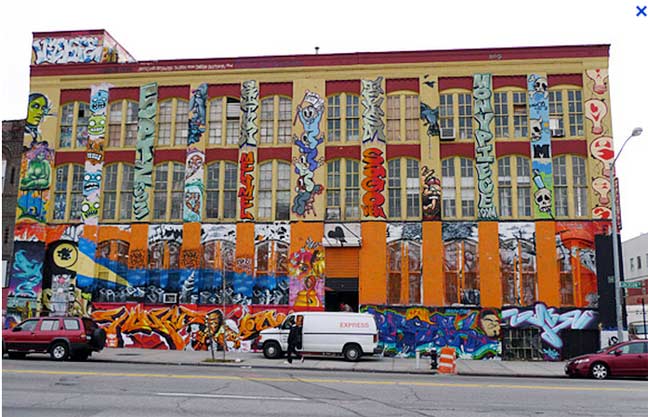 Pat DiLillo established Phun Phactory in the early 1990s to provide street artists a way of displaying their talents without breaking the law. However, some artists argue that anarchy is a part of graffiti culture, and a legal space circumvents that mission. 5 Pointz was most visible by passengers on the #7 el, which ran behind the building.

Supposedly, there will be “an inclusion of 10,000 square feet of external panels around the complex that will be devoted to aerosol art” on the new condo complex.

My Dad worked at the Neptune Meter Company for 25+ years, late 1940’s to when it closed in 1972. I remember him taking us past the building when I was very young. I always thought it looked foreboding and scary looking. He would come home from work exhausted he was a machinist. I remember when they closed the building in 1972. He came home very drunk. They asked him if he wanted to move to Alabama with company, he said no, no surprise there being a born and bred New Yorker. He died in 1979 from lung cancer, heavy smoker and exposed to God knows what chemicals at Neptune. Ironically I wound up down south anyway, Loganville GA for the past 23 years.

My father worked there too. He also did not want to move to Alabama.

My father too worked at Neptune meter he started before world war 2 met my mother who also worked there he also was a machinist I remember him taking me past the old building he did not want to move our family south when they closed I will never forget the day he came home his last day with his tool box and walked into the house with tears in his eyes.

Only today I searched for Neptune and found this place. Maybe 30 years ago I was given a machinist wooden tool box with all his tools. The calendar inside the lid was from 1957, 10 years after my birth. I am a hobby machinist and have left the box complete. If I use a tool from it I always return the tool to it’s place in the box. His name was Dixon and I even have his tool room tags for using a tool from the tool room, much like I had to use at a power house I was involved in building. His number was 161 and his badge is even in the box. What is really nice is the box and it’s contents are all made in the USA!