It’s hard to say which neighborhood the Cup & Saucer on Canal and Eldridge Streets is in. If this was 30 years ago you could say without a doubt it was the Lower East Side. However, since Chinatown has expanded well past its old boundaries over that time, you might be tempted to call it Chinatown. I’ll stick to the LES, but if it ever converts to Asian fare, Chinatown it is. 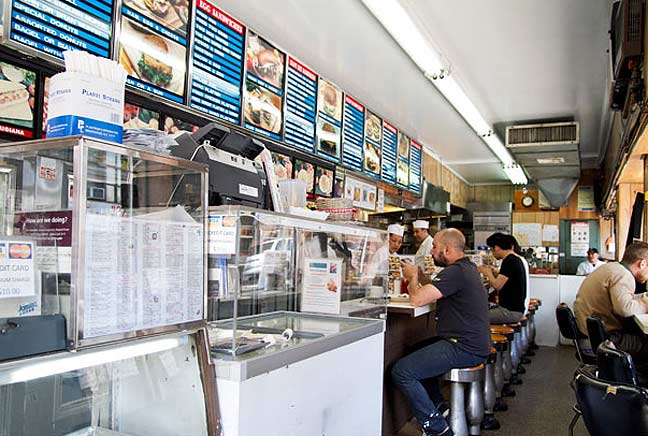 It’s a tiny diner on this pedal to the metal, traffic-choked pollution-producing boulevard between the Manhattan Bridge and the Holland Tunnel, a way station for truckers, delivery men, local shopkeepers, Canal Street bargain hunters, and loutish layabouts like me. The menu has typical breakfast and lunch fare. 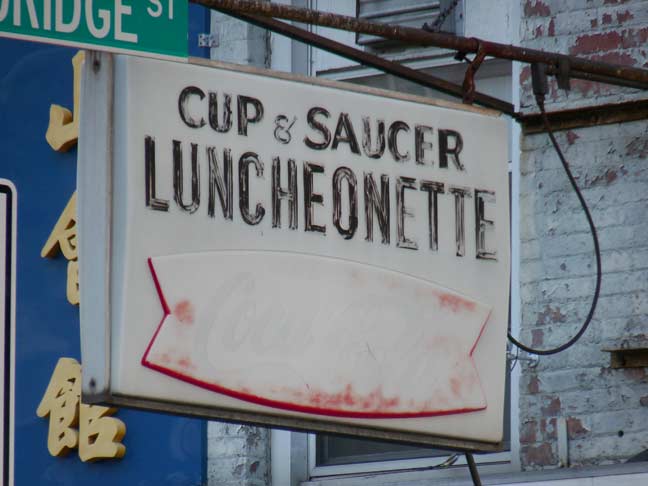 Co-owner John Vasilopoulos has been here for a quarter century and the luncheonette has been in existence for about 75 years. The plastic-lettered awning signs have been there since the 1960s or even before that, in my estimation, but the “swash” Coc-Cola logo was introduced in 1969.

Hopefully it’s there another 75 years.

[Unfortunately Cup & Saucer was scheduled to close on Monday, July 17]

Cup & Saucer is on the quiet 2-lane stretch of Canal between Forsyth and Essex streets. None of the agitation that the rest of Canal is so known for. It’s the focal point of the current flux between dominant Chinese businesses, vestigial Lower-East Side businesses and an increasing number of gentrifying upstarts.

C’mon Kevin with those adjectives. Canal St at Eldridge is hardly traffic-choked. After all it is east of the portal to the Manhattan Bridge.
And I do agree with keeping this stretch of Canal St in the Lower East Side, even though my favorite Chinese dumpling shop (Prosperity) is around the corner.

ONE note–there used to be the coolest terrazzo coffee cup on the floor just as you walked in!

Great place, had breakfast there a lot and John was always super nice.

Thanks for all the great work you do!

Can we replace it with an arty cafe?

ron s, if you are going to replace it, it HAS to be a fro-yo place:

A small, grainy, framed black-and-white photo of a 1950s flying saucer was mounted on the wall on the Canal St. side.

Wow! This picture speaks volumes. It hints of another time, maybe depression era, where poor men in ragged clothing go there on cold snowy mornings, to warm up with a hot cup of coffee. It’s the kind of place that you would go to find out about anyone, anything, the cure of the universe in that part of town. It has a magic all its own. I think of a stormy Christmas Eve morning, when its still dark outside, and the paper boy is standing on the corner shivering trying to sell as many newspapers as possible.This place is worth its weight in gold, so much character, endless stories have been told here in days gone by. Perfect movie location.