General George E. Lawrence Square (actually a Triangle), defined by Parsons Boulevard, Elm Avenue and 147th Street along 45th Avenue, can be found across the street from Flushing Hospital. It honors a St. Francis College graduate (my alma mater) who was a star quarterback at Penn, graduated with a medical degree and began his practice at Flushing Hospital, heading obstetrics and gynecology for many years. Lawrence served with the “Fighting 69th” Regiment during WWI, receiving two Silver Stars for valor. He rose to Lieutenant Colonel at the end of the war and had risen to Brigadier General by World War II.

The square named in 1951 for Gen. Lawrence (1881-1949) was originally owned by the Flushing Garden Club, which allowed patients from Flushing Hospital to maintain the grounds.

You may guess, though, the reason for my post today is the identifying sign, which probably goes back to the 1951 renaming.

Street signs in Queens have undergone a number of permutations. Early in the 20th Century, street signs were black or navy with the street name on top, and with the former name on the bottom. This design came to be when most Queens streets were given new names or numbers in an effort to standardize nomenclature at a time when Queens had recently consisted of a number of small towns with their own street naming systems. 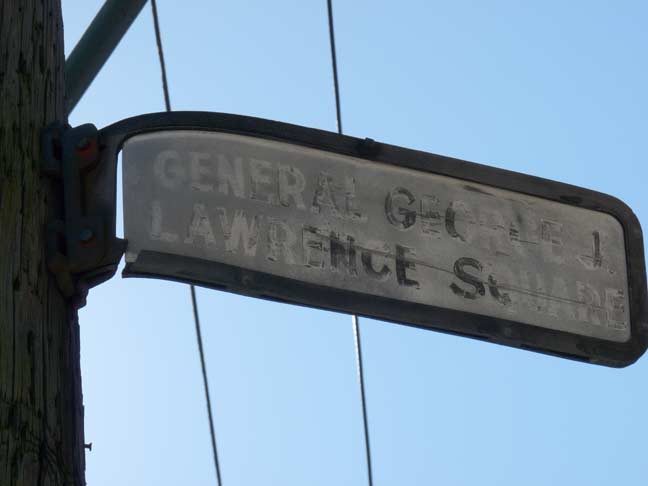 Later, in the 1950s and running into the 1960s, there were small white enamel signs with black letters. I’ve noted remaining specimens of this genre on FNY over the years, but all of them seem to have disappeared, except this one. Most of the lettering has been bleached out, but for a little bit on one side.

These were followed in 1964 with off-white vinyl signs with blue lettering in Highway Gothic, and beginning oin the 1980s, with green signs with white letters. Recently these, too, have been updated in upper and lower Clearview type.

Home to the bar f/k/a the Triangle Lounge, previously the Recovery Room and now known as John John’s

I had not realized that “[e]arly in the 20th [c]entury, street signs [had] the street name on top, and . . . the former name on the bottom.” That probably explains what has long eluded me: the street signs for 110th Avenue also have “Brinckerhoff Av” written below “110 Av” (even on the newer green signs).

they disappear because there’s probably a DOT worker who frequents this site.