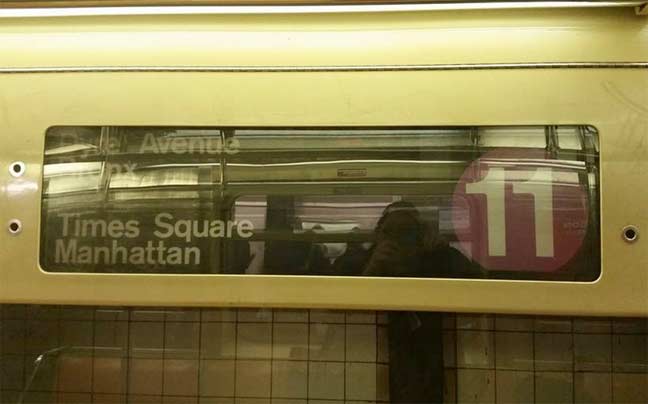 Forgotten Fan Brenna Solop recently found this odd sign combination on the #1 train in Manhattan on one of the 1980s-vintage R-62 trains still in use. She was, of course, perplexed about the #11 sign.

Notice that the color of the bullet is purple, the same color as the Flushing Line, or #7 train. At one time there was a proposal to give the express run of the #7 train a different number, and 11 was selected. Other IRT express runs were to be given Numbers 10, 12 and 13. None of these renumberings ever went through, but they were put on the roll signs just in case they ever were.

The #7 express was simply called the #7 diamond, and roll signs were produced with the 7 in a diamond instead of a bullet. Later on, R-62s on the Flushing Line were refitted with neon signs in a green circle, signifying local, or a red diamond, signifying express, replacing the diamond 7 on the roll signs. Later on, R-188 cars did away with the circles and diamonds and simply stated “7 express” or 7 local” on illuminated signage.

Other lines have used diamonds too, such as the #5 and #6. Diamonds usually, but not always, convey an express run on all or part of a line.

The #8 and #9, you say? Both numbers have been more or less retired. The #8 train was the Bronx leg of the 3rd Avenue El from 149th Street to White Plains Road; the el was demolished in 1973. The #9 was a skip stop rush hour version of the #1 train. Pop rocker Patti Rothberg titled her first album “Between the 1 and the 9.” For reasons only the MTA knows, it retired the #9 several years ago, but retained the Z for skip stops on the J train.

Lastly, the BMT formerly numbered its routes from #1 to #16.

Though the #8 was on the 1967 subway map and later ones to 1973, it was never on any subway cars. The pre-WWII IRT cars had no numbers. For the last few years of 3rd Ave elevated in the Bronx (1969-1973), the R-12 did run there, but the #8 on the signs was for the ASTORIA line. That line and the Flushing line were jointly operated by both the BMT and IRT until 1949, when the R-12 fleet was new. I don’t think they ever operated to Astoria though.

I’m pretty sure that those R-62 rollsigns included a green 8 as well, and that the idea was that they would reuse the number for the Pelham Express (diamond 6).

That sign must be permanently broken. Even if it correctly listed the 1 in a red circle, the north (Dyre Ave) and south (Times Square) destinations are wrong too (they should read 242 St/South Ferry). Knowing the MTA, they’ve probably been stuck in that position for ten years now, and will be stuck for another ten!

Seeing how our city’s transit system is overcrowded, constructing new subway lines is astronomically expensive nad new elevated lines face NIMBY opposition, it was a very boneheaded decision by our city to tear down the Third Avenue and Myrtle Avenue lines.

Development along Third Ave went into very high gear once the El was torn down in 1955 (all those large apt and office buildings bring in tons of tax revenue), and the Second Ave subway was supposed to be finished by then, so it may have seemed like the right idea. As for the Myrtle Ave El, it was very old and could not accommodated newer cars made of steel, which are much heavier than the wooden cars that ran along the Myrtle Ave line. The MTA used wood-bodied cars built in 1903 right up until demolition of the El in 1969, and could seriously do no more, considering what little funds it had at the time.

That Patti Rothberg album is one that I won off the radio, back in the 90s.
Its quite good, if you get a chance to give it a listen.

Third Avenue El in Manhattan also could not use steel cars because its structure was not strong enough to bear their weight. Steel cars (1939 World’s Fair models and later, R12s) were used on the Bronx portion after the late 1950s but their speed was restricted to minimize vibration. R12s only had four car trains on the el. Also, the middle track was removed from the structure in the late 50s to save weight as well.

During my short-lived career as a bus driver in Canada in the early 1990s, I liked to mess with people’s minds by setting the rollsign to long forgotten or abandoned routes while laying over in the terminal. Only one person ever noticed enough to comment – my supervisor! Perhaps exposing the #11 “linen” was an attempt by an MTA employee to mess with their passengers’ minds a bit, too.

Bring back the IRT ( train. Make it express. I have Ideas…