President Franklin Delano Roosevelt, the only President elected for four terms, served from 1933 to 1945, seeing the USA through the Great Depression and most of World War II. He is honored by the Franklin Roosevelt Drive in Manhattan, Roosevelt Island, and dozens of other NYC memorials. However, one of his smallest memorials has been missing since 2013. Sergey has the story. 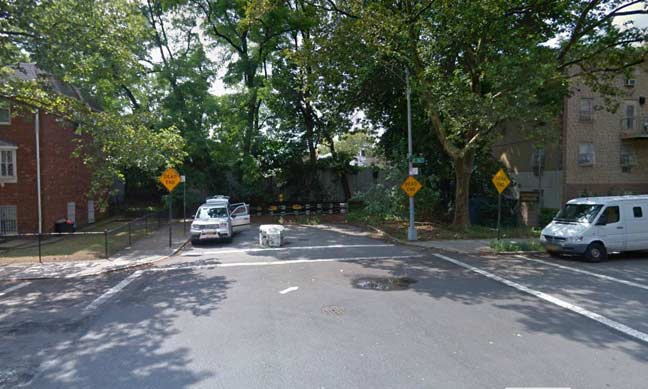 At Avenue I and East 16th Street in Midwood, there is a small circular stone in the middle of the cul-de-sac. This humble FDR memorial was installed at the intersection in 1946 by the Terrace Gardens Men’s Club. 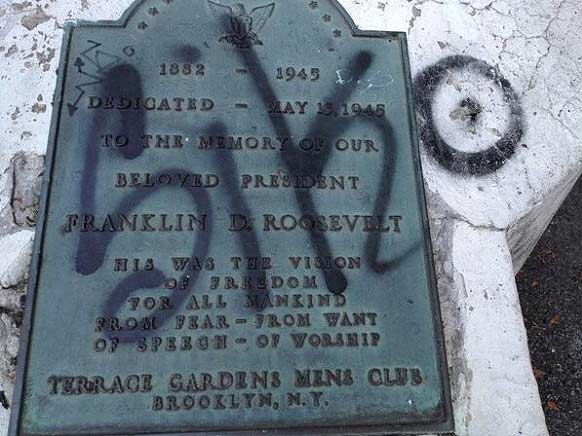 It disappeared in April 2013 and has not been seen or replaced since then. When the monument was completed, it also included a flagpole.

A block from the memorial is 915 East 17th Street, the Terrace Gardens Plaza apartments. Why is this building’s back wall curved? 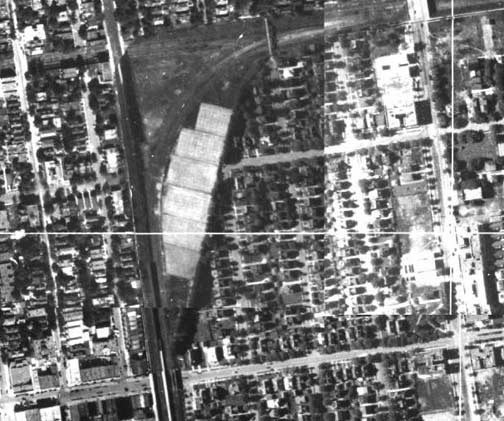 Because it follows the right-of-way of the long-gone New York, Brooklyn and Manhattan Beach Railway near its junction with the still-active Bay Ridge Branch. 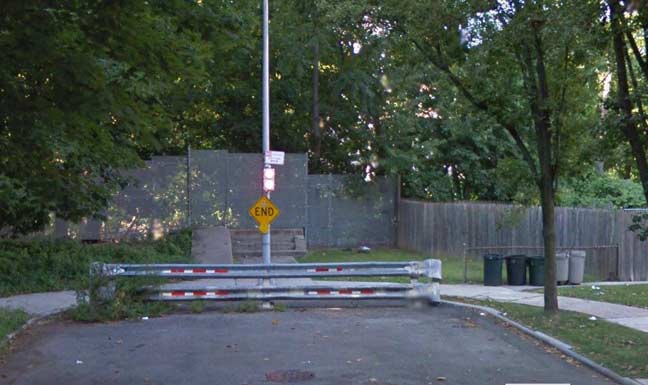 At the dead end of East 18th Street there is a ghost staircase that used to lead to a footbridge across the tracks. The 1924 aerial survey of the area (above photo) shows the outline of the former Manhattan Beach line and the East 18th Street footbridge. 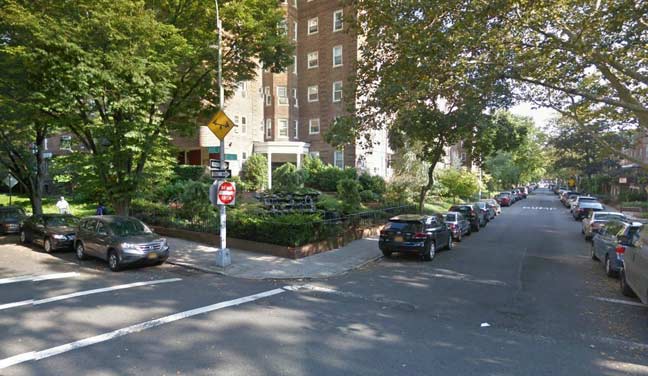 1602 Avenue I also has a curved property line behind it as a sign of the old railway. In the front it has a fancy artificial waterfall.

Finally, next to the Midwood Branch Library at 975 East 16th Street, there is a wooded lot, also a remnant of the Bay Ridge Branch.

The only other remnant of the Manhattan Beach Branch that one can find today is a property line near Avenue V and East 18th Street and on Forgotten-NY, the ghost staircase at Neck Road. Passenger service on the railroad ended in 1924. Duly noted…

Notice how the humble stolen FDR plaque in Midwood quotes from FDR’s Four Freedoms speech, jsut like the recently completed FDR monument at the tip of Roosevelt Island!

We just moved to Terrace Gardens I’ve been wondering what that thing was!

Gee a missing FDR have a feeling this nation would have been better off if FDR had faded in 1921….wonder if the 2500 killed DEC 7th would shed a tear over this being missing!!!!!!

Find all information about 127 E. 34th Street – a brownstone building that was build approx. in 1856 or 1855. It was originally a single family building with a staircase from the street level to the 1st floor above. It is believed to have been remodeled in 1910 to become a multiple dwelling.
Best wishes toward the holidays
Respectfully:
Norman Sinowitz

The building with the “fancy artificial waterfall” is named The Waterfall. It is located at 1620 Avenue I, not 1602 Avenue I.