Queens’ Sunnyside Yards were competed in 1910, at the same time as Pennsylvania Station in Manhattan and the four tunnels that at long last brought Long Island Rail Road trains into Manhattan after the railroad had been in existence for about 75 years. The final piece in the puzzle would be the construction of the Hell Gate Bridge and its approaches in 1916, which facilitated train traffic from Penn Station to suburban New York State and New England.

The yard is owned by Amtrak and is used to lay up both Amtrak locomotives and passenger cars, as well as those used by New Jersey Transit. (LIRR units have their own yard to the west of Penn Station, much of which is being decked over in advance of the Hudson Yards megaproject.) At 192 acres and 25.7 miles of track, it was once the largest trainyard in the world and today ranks among the largest.

Because Sunnyside Yard is so large, it severely impeded north-south traffic, which largely comprised horses and carriages in 1910 but quickly changed to automobiles, trucks and buses. A number of lengthy iron bridges were built to span over the yards at 21st Street, 49th Avenue, Thomson Avenue, Honeywell Street, and Harold Avenue (39th Street). The tracks are bridged over 42nd Street and 48th Street.

While these bridges date back to 1910, they weren’t maintained al all and once, the Honeywell Street Bridge, was closed in 1979 and ultimately torn down, with a new viaduct built in its place and opened in early 2003.

There was always something going on with the street lighting on these bridges. Long after the aluminum-pole revolution in the 1950s and 1960s, these bridges still continued with odd bishop crook designs until they were remodeled or torn down. 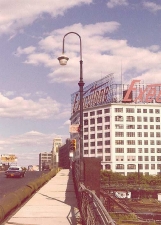 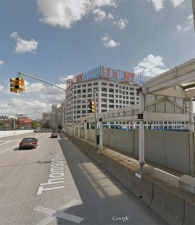 Two views from the Thomson Avenue bridge from about the same spot, in the 1980s and just recently. The Thomson Avenue span has been completely revamped with a pedestrian awning for rainy weather. The American Chicle Building, in the 1980s carrying a neon billboard for Executone (which is still in business), rises in the background.

The old lamppost is attached to the railing with a narrow base. I’m not sure the curved shaft ever carried any scrollwork. 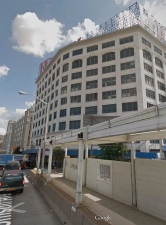 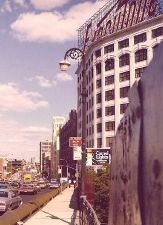 This view from a bit further back on the bridge shows the same then-and now, but with an unusual bishop crook design used pretty much exclusively on bridges, which includes a simplified scrollwork design in the curved section. It’s amazing these posts lasted for nearly 80 years and in some cases, nearly 90 years. 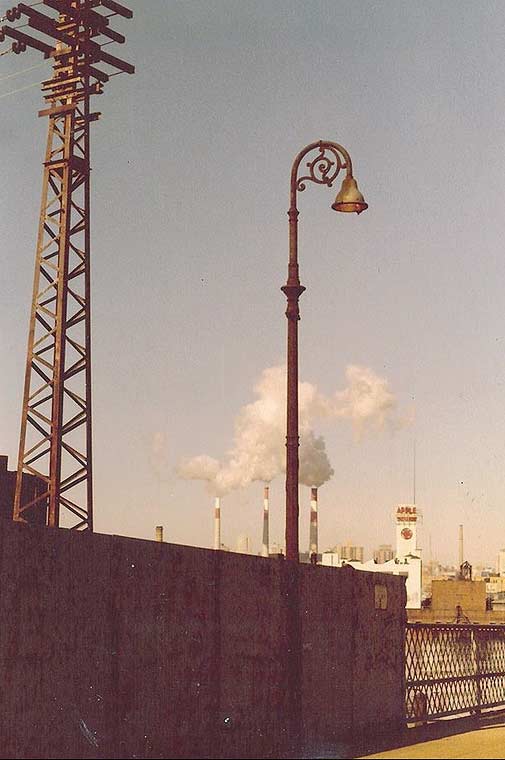 This somewhat taller version of the same post, with its unusual scroll, can be seen on the Honeywell Street Bridge in about 1980. The incandescent lamp is dayburning.

My copy of the System Electric Companies’ 1934 survey of NYC lampposts lists the poast as special to Honeywell Street, but similar posts were placed on all Sunnyside Yards viaducts. 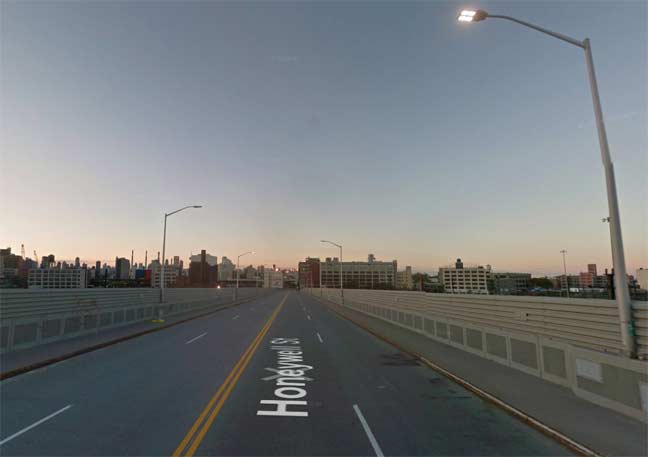 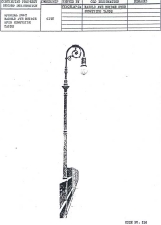 Here’s a 1980 view of a bishop crook on the Harold Avenue (39th Street) viaduct and its listing in the same catalog. Note that the scrollwork on this post, both in the rendering and the photo, is the usual regulation scrolls found on other NYC crooks, both old and new. The shaft and base are especially modified to fit within the fences. 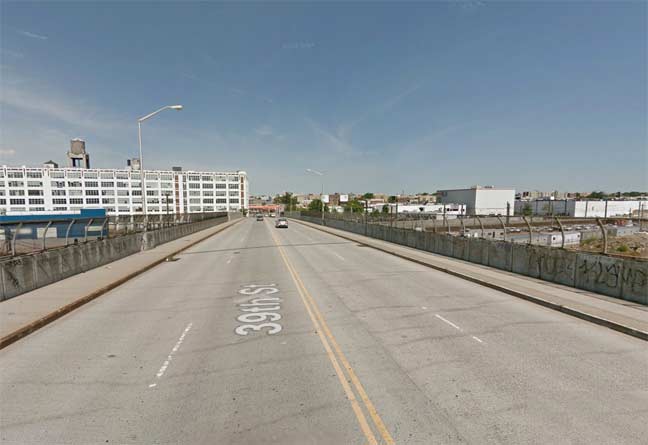 The old Harold Avenue Bridge and its bishop crook menagerie were also wiped out in the early 2000s with the construction of the new 39th Street Bridge. 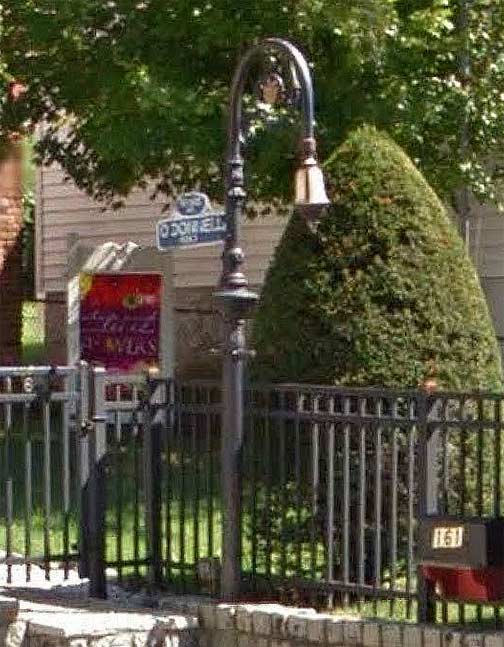 They may not have entirely disappeared, though. King of NYC Lampposts Bob Mulero, who took all the older photos on this page, located what he says is one of the Harold Avenue posts in a driveway on Wellbrook Avenue in Castleton Corners, Staten Island.

Happy New Year Kevin! Sad to say, it looks like the current viaducts do not offer views of the railyards to pedestrians anymore. When I was a budding railfan kid in Queens in the 60’s/70’s, a weekend day without much to do often would be enlivened by my dad offering to take me and/or my brother down to the Honeywell viaduct to do a little train watching. Was always something moving in either the LIRR freight yard and the Penn Central/Amtrak side of the yard.

In those pre-security days, feeling bold, we would often walk right down the unguarded employee staircase which led from the viaduct into the yard! That led to several memorable experiences thanks to friendly employees: my brother getting to ride a Pennsy dining car from one end of the yard to the other; my one and only time operating a diesel switch engine towing some Amtrak cars around(!) and best of all, a ride in the cab of a GG-1 electric from Sunnyside to Penn Station (I had to leave my dad behind and get back to Whitestone myself, but it was worth it!!!)