During December I was lollygagging aimlessly around lower Manhattan, seeking out oddities where I could find them, and toward the end of my walk I turned up Mercer Street toward Houston, which would eventually get me to the #1 train on Varick. I enjoy walking in SoHo, because of its historic cast-iron front architecture built in the years after the Civil War, but I always think I would have liked it a lot more had I discovered it in the 1960s or 1970s. Back then, SoHo was mainly populated by wholesalers, manufacturers, and small businesses, and you probably wouldn’t have wanted to be around late at night. This particular SoHo is captured excellently in Margot Gayle and Edmund V. Gillon’s Cast-Iron Archtecture in New York, which came out in 1975 and was in print for several years afterward.

After Robert Moses’ plan to ram the Lower Manhattan Expressway between the Manhattan and Williamsburg Bridges west along Broome Street to the Holland Tunnel was rejected by the public and then by the then-Department of Traffic, SoHo had a “renaissance” and became a combination upscale residential and commercial region. Most of the old factories and storage spaces were pushed out by rising rents, and even the side streets now feature storefronts selling pricey fashions or goods. New York’s first Apple retail store opened at Prince and Greene in the late 1990s; sometimes I’d go in and ogle the merchandise, as they say, and in Forgotten NY’s early days I participated in a symposium of “photobloggers” in the store’s upstairs theater, which turned out to be a hit with the audience. Even then I was something of the elder statesman!

What I pay attention to on my jaunts is signs of the old peeping through the new, and relics of the bygone ages that, like me, have survived to the current era despite the odds. On this particular Mercer Street walk I found a few things. 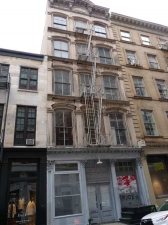 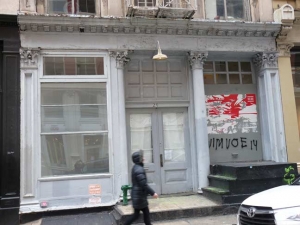 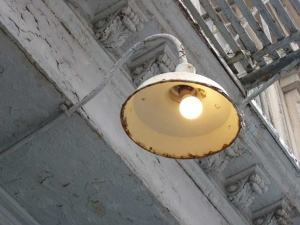 Take #29 Mercer, between Howard and Grand, which with its peeling paint, empty storefront and incandescent bulb illuminating the doorway, likely looks like it did in 1965. It’s a cast-iron front building built in 1868 by architect Louis Berger for merchant Henry Cardoza. The ground floor is likely a more recent design. 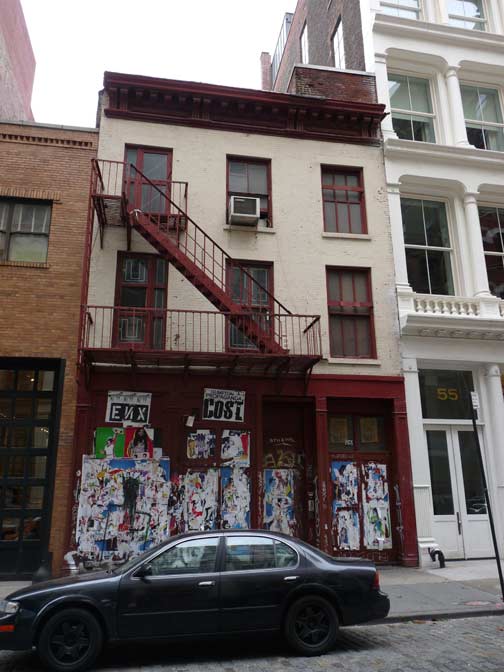 #53 Mercer, a 3-story brick building between Grand and Broome, was also built in 1868. Unlike many other Mercer Street buildings the fire escape is in the front, and while by now most other building fronts have been polished and carefully designed, with products neatly arranged, every poster in the neighborhood has plastered something on… 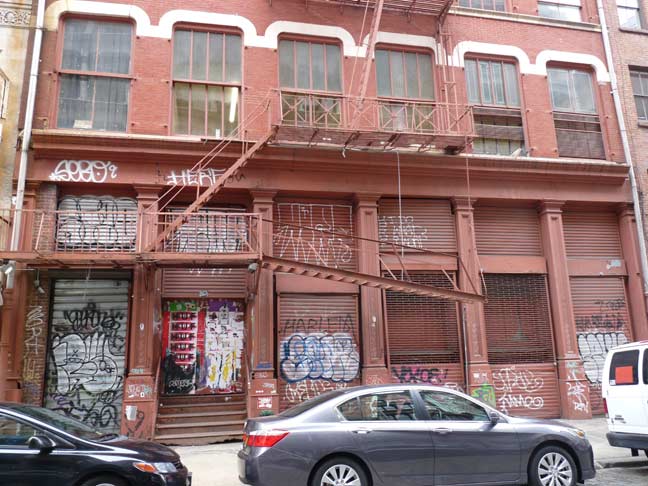 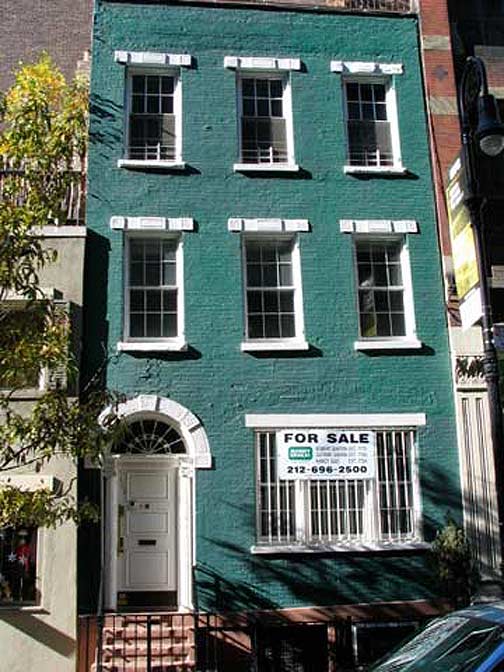 When I first passed #105 Mercer,  between Spring and Prince, I thought it was something special, especially since I liked the Kelly green and white color combination. 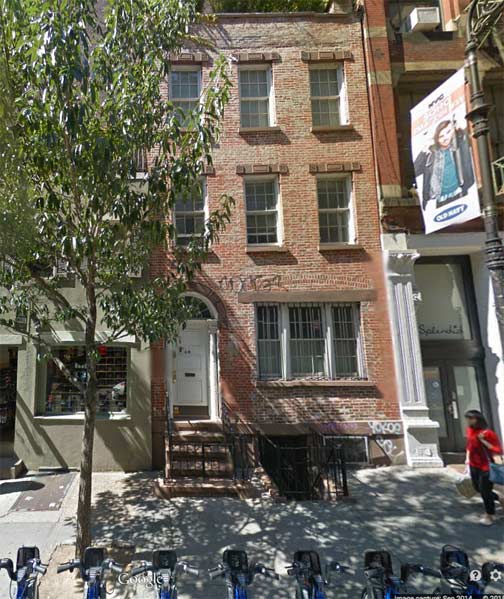 Passing it again in 2014, I see a new owner has stripped off the green paint and exposed the brickfront. I always thought it was something special because I knew it was older than the other cast-iron front buildings.

No. 105 was built -in- 1819-20 as a residence for Mary Boddy, a seamstress. Although this Federal brick house has had its pitched roof and dormers removed and its ground floor window replaced, it is amazing that so many of ifs original elements remain, considering the commercial character of the District for over one hundred years. The finest details on the building are the slender, wooden Ionic columns flanking the door and the intricately worked, spoked leading of the fanlight, which is completely intact. Framing the fanlight is an arched stone lintel with a vermiculated keystone and voussoirs that alternate-with simple curved panels. The same combination of smooth and vermiculated panels is repeated on the stone lintels above-the three windows on both the second and third floor. NYC Landmarks SoHo Castiron District Report

Jim Naureckas, in NY Songlines, says a Cinderella Marshall ran a brothel in this building.

Translating architect-speak, “vermiculated” is  “marked with sinuous or wavy lines”; “voussoir” is “a wedge-shaped element, typically a stone, used in building an arch or vault.”

It’s not the oldest building on Mercer Street; that is the corner building at #107 Spring, a boxy 3-story building housing a sunglasses store, but it’s been renovated so many times that its age looks indeterminate. 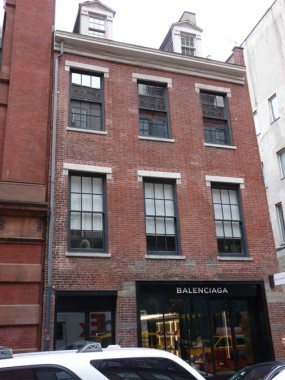 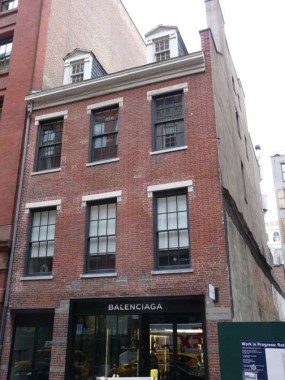 Another of Mercer Street’s older buildings is at #149, between Prince and Houston. It was completed in 1826 and has retained the dormer windows on the roof. 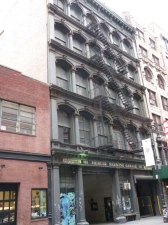 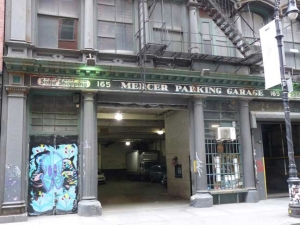 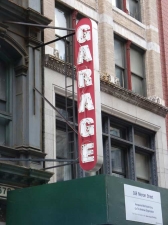 The Mercer Parking Garage, #165 Mercer, is an iron-front building completed in 1871. It features a number of interesting painted signs above the door and newish neon sign. It stands in one of the former locations of the African Grove Theatre; founded in the 1820s, it was one of the first theater companies employing African-American performers.

It was always fun to take visitors to the 89 Bar at 89 Mercer Street to see the transparent restroom doors. Too bad it’s closed up now.

I remember soho in the mid 60s.
It was very dark and quiet.The city seemed to be very stingy with its streetlighting in that area

according to my mom who’s lived in soho for over 30 years 105 mercer used to be a brothel.

what was the name of the Asian folk arts store on upper mercer street? they were there for a long time, then moved to Rivington St. They had a famous bead room in the back.