On my last visit to the NYC Transit Museum (where I have been a member for over a decade) I noticed that a pair of R-40 subway cars, #4280 and #4281, had been trotted out. These were very futuristic-looking when they originally hit the tracks on BMT and IND lines in 1968-1969, even more so than the corrugated stainless steel R-32s from 1965, because they were shovel-nosed, with slanted fronts designed by famed French industrial designer Raymond Loewy. 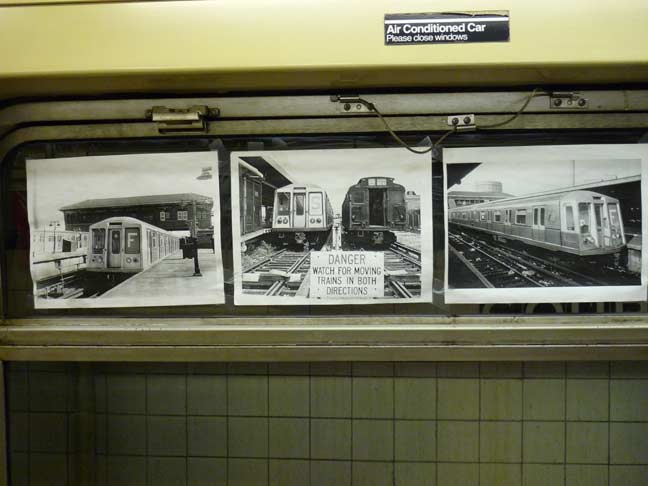 Photos displayed on the #4281 interior indicate how outlandish these cars looked next to the rolling stock still playing the routes in 1968. Beginning with the Chrystie Street Connection in 1967, that allowed IND trains access to the Manhattan Bridge and the 6th Avenue Line, routes were more and more identified by letter instead of by line. The R-40s played into this need with a king-size illuminated letter on its left side. (Route colors were different in 1968 and settled into their present denominations in the late 1970s). 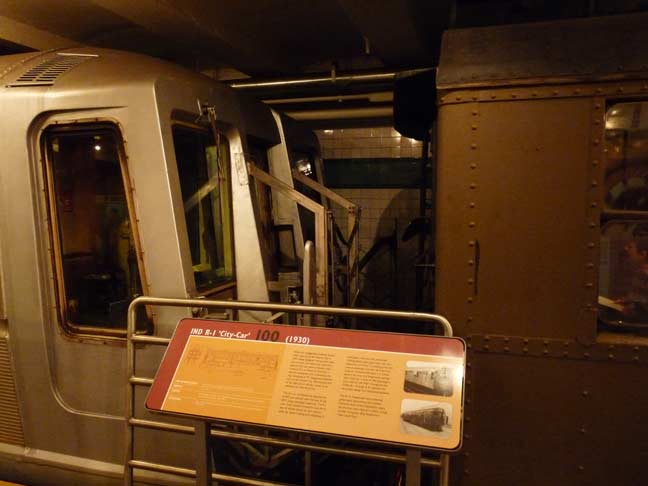 An immediate problem with the R-40 is that Loewy did not take into consideration New Yorkers’ penchant for walking from car to car, or even riding between cars in summer, as the first R-40s in production did not feature air conditioning. Thus, fences and gates for safety had to be installed on both sides of each car, pretty much blunting the design effect Loewy was going for. Later versions of the R-40, known as the R-40M class, were built with blunt fronts and ends, like their cousins the R-42 series.

The R-40s and R-40Ms continued to run on various lines until 2009 when the last set was retired from the A train. A pair of them is on display in the NYC Transit Museum at Boerum Place and Schermerhorn Street in Brooklyn. 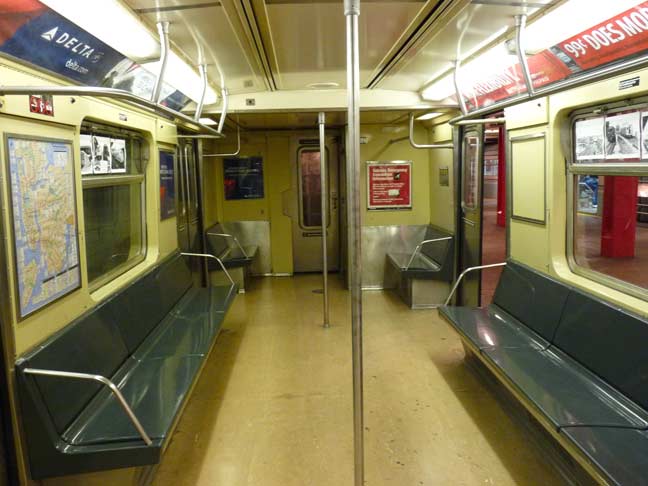 My favorite subway cars today are the R-46 series and R-68 series (recognizable by their orange and yellow seating) that still employ latitudinal seats, but after they are phased out in a few years, that’ll be it for being able to sit comfortably and look out the window. You’ll be forever attempting to avoid eye contact with your fellow passenger across the aisle! Even though everyone is fiddling with their electronic devices now. 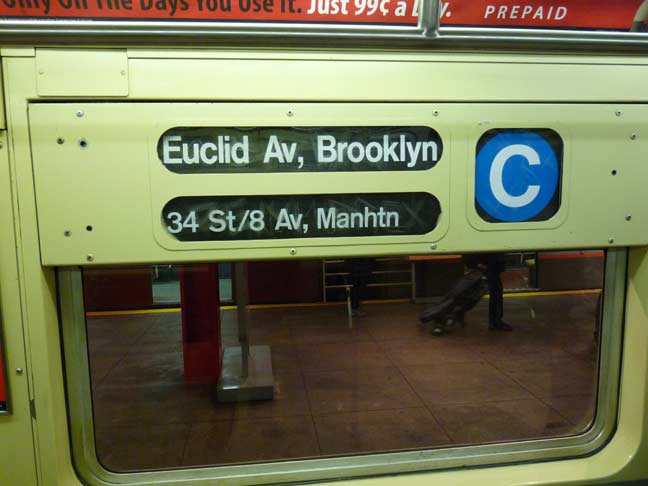 A word about the C train

As far as I know the C is one of two subway lines that has no stations it can call its own. The C is merely the “local” version of the A, between 168th Street in Washington Heights and Euclid Avenue in Brooklyn.

Subway historian Joe Korman: The B has no stations of its own. It shares the Bronx-Concourse, Central Park West, and 6th Ave with the D and then the Brighton line with the Q. [However, the B does run on two lines, with the C running on only one]

The MTA handles local/express nomenclatures in different ways. The 7 express is the diamond 7, though there was once a plan to call it the #11. Ditto the #5 and 6, which have diamond express versions. There are also skip stops, in which a designated train stops at specific stations in rush hours (the J/Z in Brooklyn and Queens, formerly the 1/9 in Manhattan/Bronx).

For consistency, the C should really be the round bullet A and the present A should be the diamond A, but confusion would result if that was ever done.

Beginning with new R-143 cars and every iteration after (they are up to R-180) there’s also been a de-emphasis on identifying routes by color: subway bullets have a designated color depending on their Manhattan trunk lines. However, newer cars do not use colored bullets on their exteriors, only small ones on interior route indicators.

I miss the variety.

Even with the installed fences and gates, walking safely between these cars was quite a surprise and challenge. It’s a wonder there weren’t significant mishaps.

The B has no stations of its own. It shares the Bronx-Concourse, Central Park West, and 6th Ave with the D and then the Brighton line with the Q.

A few corrections. None of the R-40s featured air conditioning. A/C was added when the cars were overhauled in the late 1980s. All the cars you picture are overhauled. The original interior paint scheme was light blue and the floors I believe were white tile and grey in the center and near the doors. The beige floor dirtied too easily and future car classes had darker linoleum installed when overhauled.

Also, prior to the R 40s being delivered, all publicity pictures showed only two cars. Many thought that only the first and last cars would be slanted. It was a surprise to find each car pair slanted and the wide space between cars after they were put in service. A blind person fell between cars while walking between them within a few months and was killed. All cars were then retrofitted to prevent future accidents.

I did say that longitudinal was used in the early days, but became the favored arrangement later.

The R-40 (Slant 40) series came without air conditioning except for the last 10 car set from St. Louis Car Company in 1969. It had at both ends, from the bulkhead to the beginning of the nearest side door, a lowered ceiling, for the A/C evaporator and blower fan. I am trying to remember if fluorescent lighting was also a hint to the presence of A/C capability. Unfortunately, during the 1970’s Summers, the A/C never worked, since the West End line (formerly “B,” presently “D”) were shopped at Coney Island Yard, which did not do A/C work, or really anything for that matter.

The Slant 40 was a delight for every young train buff because “A” end’s bulkhead door was mostly glass and allowed for ease of viewing from the motorman’s point of view, without standing on your tippy-toes.

The diamond bullet express services supplement local service in the peak direction only. For example, the diamond 7 runs toward Manhattan in the A.M. rush and toward Flushing in the P.M. rush.

The A and the C, however, are full time lines (except late nights on the C) that run in both directions during all service hours, so it wouldn’t make sense for either of them to be diamond, or for them to share a route designation.

The blunt end R40s all had air conditioning right from the start. In fact the 4500 numbered cars were
the very first air conditioned cars used on the EE and GG. The 2 lines shared the cars on weekdays
and all of them were used on the GG on the weekend when the EE did not operate. I remember
coming home from work, waiting on the Times Square platform for an R40 to show up so I could
ride home to Jackson Heights in comfort.