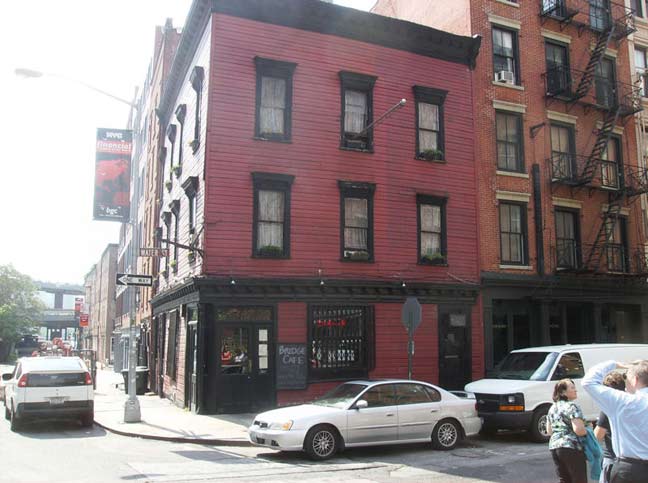 According to sources such as Richard McDermott of The New York Chronicle and Steve Redlauer and Ellen Williams of “The Historic Shops & Restaurants of New York”, the Bridge Cafe, at Water and Dover Streets, is the oldest establishment in NYC that has continuously been run as a tavern. In a number of different guises and many different owners, it has been here, in this building, since 1794. 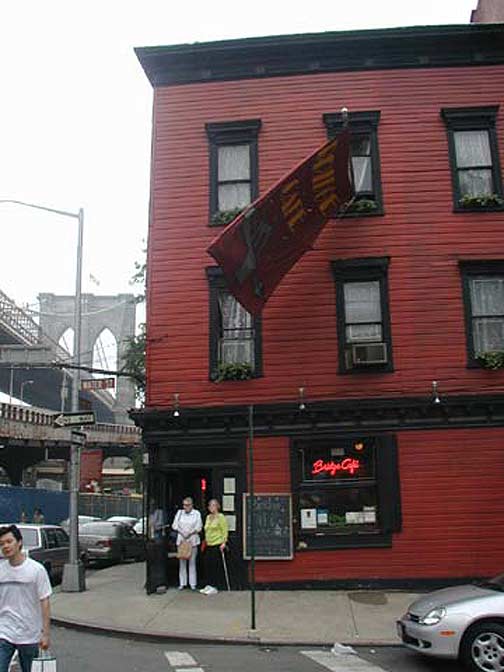 Previous tenants have included the Hole in the Wall, operated by One-Armed Charley Monell. An 1847 visitor to the Hole in the Wall would have had to contend with Monell’s two barmaid/bouncers, Kate Flannery and Gallus Mag. The latter was said to have a habit of biting off the earlobes of especially unruly customers. Charley kept a jar of pickled earlobes over the bar. It doubled as a brothel in the 1870s when it was run by Tom Norton. Dogfighting and ratbaiting were popular entertainments in that era.

It has been known as the Bridge Cafe since 1979.  It was built on the water’s edge, as Water Street marked the original shoreline. The Brooklyn Bridge behind it went up in 1883. It was originally listed as a “grocery and wine and porter bottler”; in that era, groceries sold wines and spirits and were issued liquor licenses.

We now speak of Forgotten New York in terms of decades, and I haven’t been in the Bridge Cafe since ForgottenTour #17, back in July 2004! I should wander in again…

(I can’t, immediately, since the place has been closed since Hurricane Sandy in 2012. They are apparently working to reopen.)

Back in the 80’s, I would have lunch there on occasion. There was always a table reserved for Ed Koch.

Can’t wait for the reopening. I have friends coming in from aspen next month and want to take them there for a true new York experience