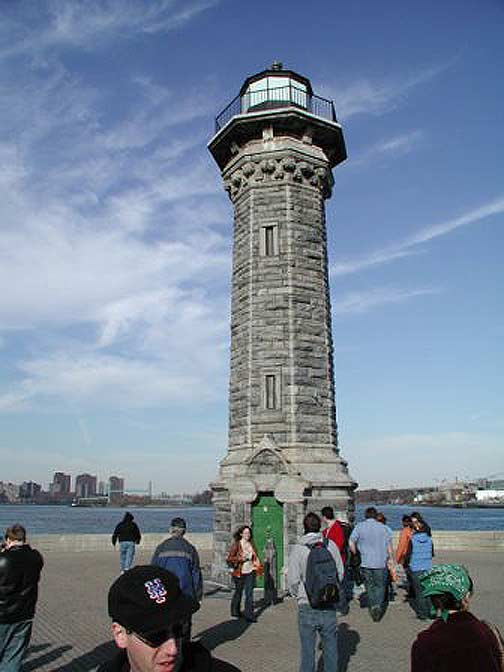 Lighthouse Park is named for the gray gneiss rock 50-foot tall lighthouse (known officially as the Blackwell Island Light) built by architect James Renwick Jr., who also built the island’s Smallpox Hospital, in 1872. It replaced a small fort built by Thomas Maxey, a patient in the nearby “Octagon” lunatic asylum, the remains of which formed the centerpiece of a new luxury housing project completed about a decade ago (as of 2015).

Until 1976, Roosevelt, formerly Welfare, formerly Blackwell’s Island, was rarely entered by New Yorkers unless they were physically or mentally ill. For decades it was the bastion of asylums and hospitals after it7s purchase from private owners by NYC in 1828. Only two facilities, Goldwater Memorial and Bird S. Coler, remain today. The former Smallpox Hospital lies in ruins on the island’s southern tip.

A plaque carved by another patient in the asylum, John McCarthy, who claimed to have assisted in its construction, is reported to have been here until the 1960s, when it was stolen. It read:

This is the work
Was done by

The light operated until 1940, and thence the lighthouse was unmaintained and fell into ruin. It was subsequently stabilized and restored by 1998.

Courtesy of HULU video streaming here’s what this place looked like in 1958 in an episode of “Naked City”. If you can spare about half an hour here’s a great time capsule.

Goldwater Hospital closed a year or two ago. It is now being demolished to make way for the Cornell Tech graduate school.

In anticipation of the demolition of the Goldwater Hospital buildings, Goldwater was merged with Coler and the the Coler facility was renamed to reflect the merger. Many of the former patients of Goldwater were transferred to a new, modern building in Harlem.

And the lighthouse itself has the form of an octagon. Probably not a coincidence.

I’m old enough to remember the elevator that took people and vehicles from mid span of the Queensboro bridge west bound side down to (then named) Welfare Island.