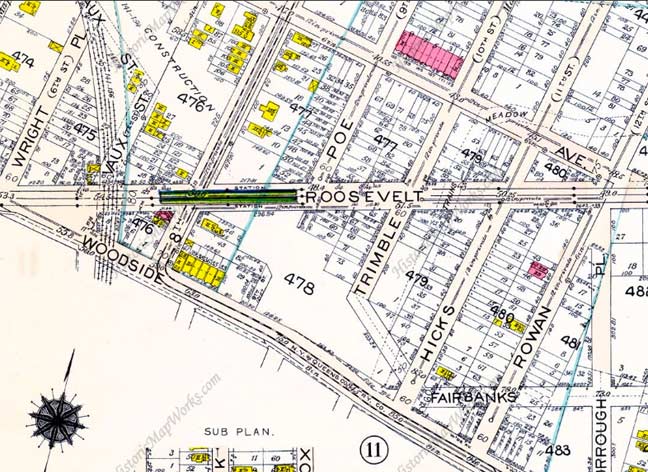 You may not think that this 1915 Belcher-Hyde map of the Woodside area around the Long Island Rail Road/Roosevelt Avenue transit complex (near old Shaw’s Hotel) has much relevancy today… after all, the streets are all numbered these days. And, taking a close look reveals very few buildings, marked by small yellow or purple boxes. Shaw’s Hotel is actually on the map, that small yellow box on “Hicks Place” at Woodside Avenue and the vanished Fairbanks Avenue.

But changes were afoot here that reverberate till the present era.

Now, notice that swath of blank space that runs through the middle of the map. In 1915, the Long Island Rail Road was about to straighten its main line that ran out to Jamaica and beyond, and it had acquired a great deal of property along the route, through which it was about to dig a lengthy trench for an open cut to place the tracks. 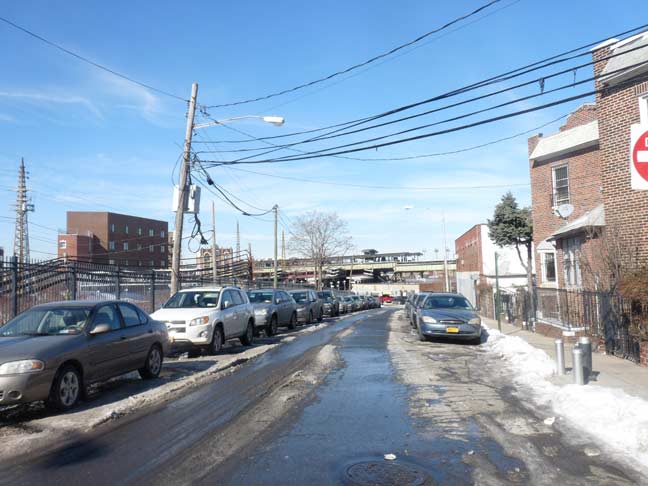 Notice a short street connecting Trimble and Hicks Places. Even after the railroad trench was completed and all the streets given numbers, the short street between 63rd and 64th Streets remained, and was assigned the name Trimble Road. (The name reminds me of the longtime NY Daily News sportswriter Joe Trimble.)

Hicks Place, as well, is recalled by Hicks Drive, which runs between 63rd and 64th Streets along the LIRR right-of-way. 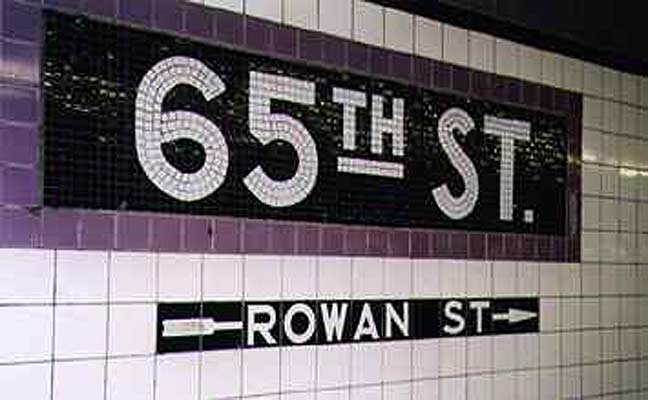 Trimble and Hicks aren’t the only streets on the old map that still have tangible remnants today. There’s also a Rowan Avenue on the map, replaced by the present-day 65th Street.

A trip to the 65th Street IND Queens Boulevard Line on Broadway will reveal small “Rowan Street” directional signs on the walls. The station was built in the 1930s, a good ten years or more after the street names changed, and the signmaker may be in error in calling it “Rowan Street” rather than “Rowan Avenue.” The name may have likely been retained because so many train stations have signs notating old street names — for the benefit of oldtimers who remember the old names.

Those oldtimers, of course, by now are pushing the daisies, but the old signs carry on.

The two street signs designating Trimble Pl were at 64th St and at Roosevelt Ave. Not sure which was which, but one had the correct spelling while the other read “Timble Pl”

Sorry, on the previous comment I misspelled my own name as well as messing up the comment. It should read…

The two street signs designating Trimble Rd were at 64th St and at Roosevelt Ave. Not sure which was which, but one had the correct spelling while the other read “Timble Rd”

Its sad thinking of these forgotten roads and places…

They should leave signs reminding the areas..